Hello Everyone! I’m fairly new to linux and have been wanting to get a vfio setup and now I have finally achieved that. The main issue is that the performance is not what I think it should be for my system. In general the windows 10 guest is pretty laggy like when I open explorer or even task manager it hangs for a second and then opens or if I’m hovering over desktop icons that also causes lag. The games I’ve managed to test are Squad, Beyond The Wire, and Fall Guys. Squad runs perfectly, and Beyond The wire is soso but surprisingly enough Fall Guys runs absolutely terrible. I get around 24 fps in game with lows of 14 fps and switching between the menus in that game or simply hovering over the options causes it to stutter. I think my system is capable of this but I think it is just an issue with some way I’ve set up my VM.

The host is running on IGPU and guest is getting the 2080 my distro is Manjaro.

Here is the way the VM is set up 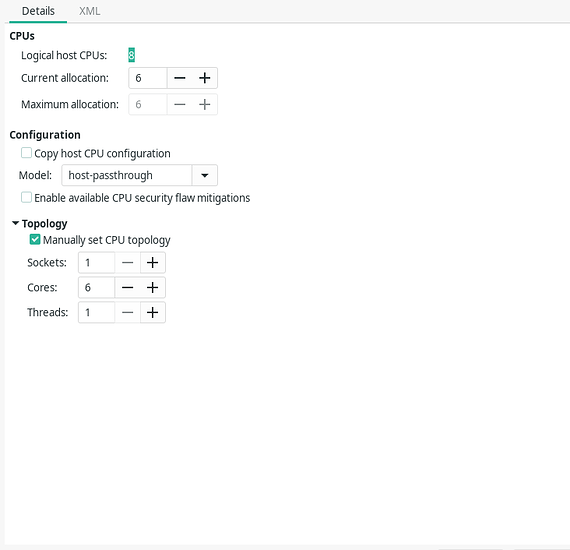 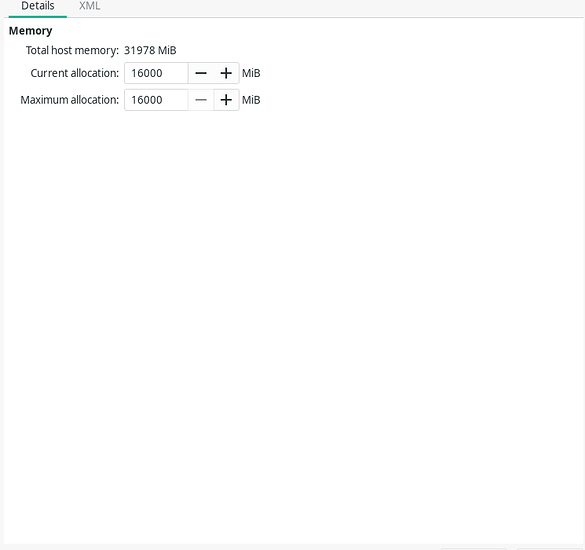 I am very new to this but I do think for sure that my system is capable and that it is just something I’ve done wrong on my end. Any help would be greatly appreciated! And if you need any other info that may help you help me please let me know!

Can you please post the complete XML information for your VM as well as a list of the hardware in your PC?

I’ve got similar issues, posted them and my xml here (below). Have you tried Heaven benchmark on both systems (bare metal and vm) ? For me that is spot on, but still seeing issues in the game. Initially I had lower Heaven FPS on the VM but once I added the presentation of the CPU topology correctly that showed the same results.

Hi, I’d like to compare notes on FPS issues with GPU Passthrough (however interesting that is

). I’m unsure of the bottleneck when comparing Bare-Metal windows game Guild Wars 2 with running it inside a QEMU-KVM VM with GPU Passthrough. It’s the first and only actual game tested with my GPU Passthrough. No actual error or failure stands out unless I missed something. PC Specs: Motherboard: P8Z68-V GEN3 NVidia GeForce GTX 970 SSD Samsung EVO 850 iGPU running Host CPU: Intel i7 2600 QEMU emulator version 4.2.1 (Debian 1:4.2-3ubuntu6.8) Ubuntu 20.04 Passthrough: 2 PCI devices (NVidia Video + Audio). The IOMMU group also has a PCI Bridge (IOMMU Group 1 00:01.0 PCI bridge [0604]: Intel Corporation Xeon E3-1200/2nd Generation Core Processor Family PCI Express Root Port [8086:0101] (rev 09)) This is not passed through (unsure about that one). I’ve compared: Bare-Metal Heaven (DirectX11) benchmark shows approx 112 ±2 FPS for both, so it’s roughly the same. CPU-Z shows approx 371 ± 1 for both in SingleCore, so it’s roughly the same. Multi core is different (as exepcted due to 2 / 4 cores active. MultiCore is 1454 vs 1939) Guild Wars 2 comparing same position in the game: Bare-Metal approx 70 FPS, VM approx 50 FPS. So about 30% FPS loss. Optimizations: Windows Guest optimizations done (Performance settings etc.) Host: Hugepages active, /cpufreq/scaling_governor set to ‘Performance’. Activated Elightenments. Tested: CPU Pinning (with emupin, iothreadpin for virtio-scsi, kernel params nohz_full, rcu_nocbs, except isolcpu) in different ways, only negative impacts seen on GW2 (down from approx 50 FPS to 35-45 FPS depending on the pinning). Tested: Tried changing from qcow2 to img (raw) with no effect. Tested: Increasing from 2 to 3 cores (6 vCPUs), no effect. Tested: With or without evdev integraiton for mouse and keyboard. With evdev sometimes moving windows very quickly can have them trailing behind

but no impact on game FPS. In wi…