Hello to everybody on the Tek Syndicate forum this is my first time posting so here I go. As the title implies I am having some trouble with my Korean 4k monitor. At first when I got it was fine just like Wendell described it , however down the line I notices strange vertical purple line which was followed by two yellow vertical lines a couple of days later. So here I am looking for some suggestions on how to fix this. So here are few pictures. 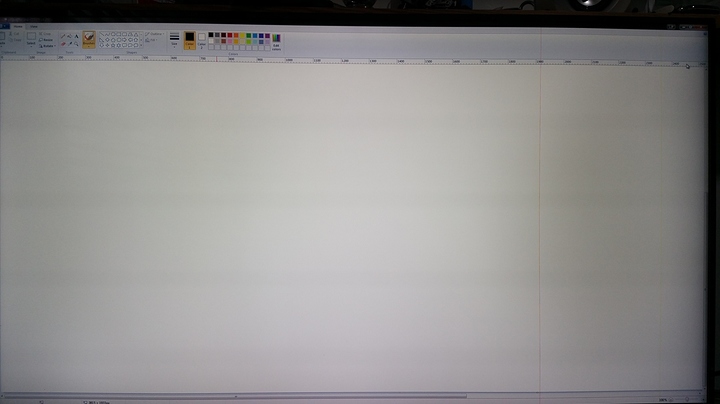 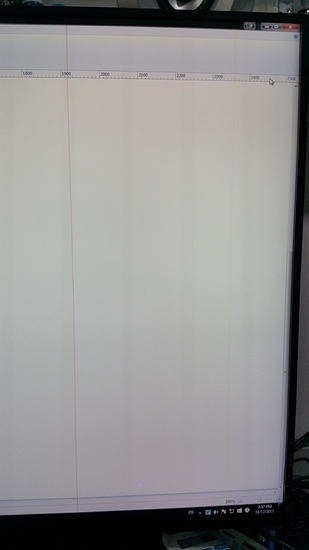 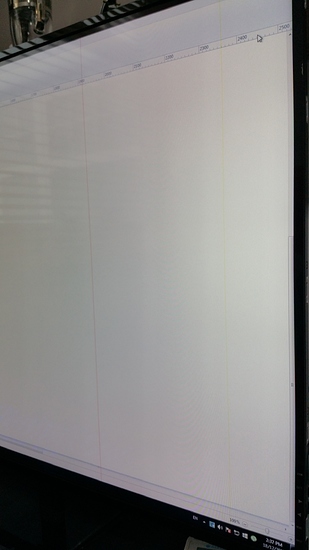 Here are some images of the back of the AMH A399u. 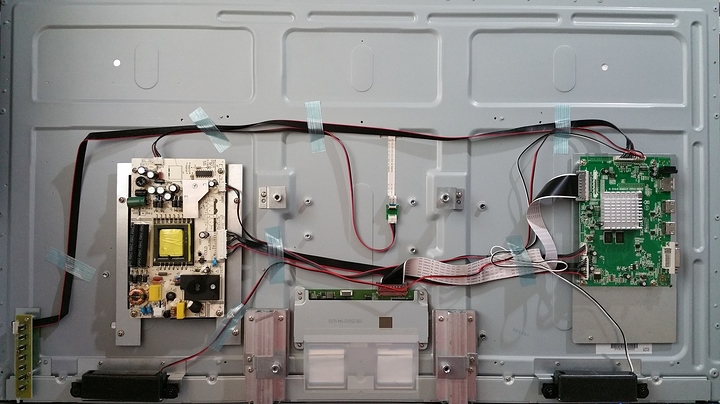 Very interesting! .and a first. (for me).
I would, (at this point) delicately secure all inter-connectors, check that all boards are securely screwed in (NOT TOO TIGHT), change cable, check if present on HDMI and DP and DVI.
Do try on another computer, it may come from the monitor but it can also come from elsewhere.
Too bad we do not have test points; you could scope-it and find immediately if monitor or else.
I have a spare psu for A399U.
How long have you had the monitor for ?

Hi Maxcat thanks for the reply, I forgot to mention that I have tried different cable connections and exit port from my graphics card. However the vertical lines still remained, I am going to check if all the cables at the back are secured correctly and check the mother boards if they are to tight. I will give that a try and see if that helps get rid of the annoying lines.

I have had the monitor right after they started selling them deglassed on ebay.

Also there are these screws around the panel I am wondering if loosing these screws if that would make a difference as I am seeing some background bleeding. 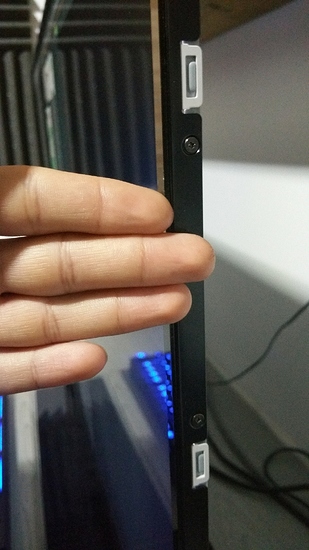 Very good question ! Is the bleeding that obvious during use ?
I have had mine since july this year ! From memory they had 2 productions batches. (read somewhere)

did you try on another computer ?
what graohic card ?

I have a laptop but I cat find my HDMI cable.
The graphics card is a gtx 680.

I have two monitors hooked to the graphics card my secondary monitor is x-star dp2710 and I dont see any vertical lines on it.

Try to make tests with 40 alone !
while it is open; PREVIOUSLY DISCHARGING YOURSELF BY TOUCHING WITH BOTH HANDS A COMPUTER/BARE METAL part !
Then very very very delicately secure inter connectors. the other monitor is not a reference because the Korean 40 s are quite unique in their behavior when in use with other monitors. (even it s own kind).
There are some tests possible; do you have any or experience in electronics or computer building ?
i ll get back to the bleeding !

Right I have found my HDMI cable pluged it to my laptop and found that the vertical lines are still there. So its definitely the monitor. I have taken the cable out and pluged them back in the ones with the red circle but no difference. 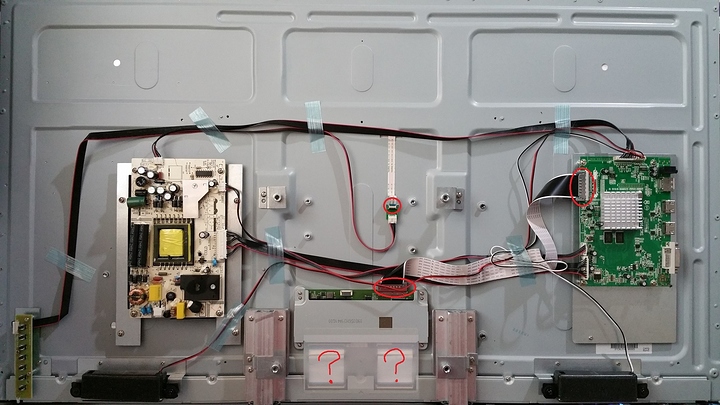 The board on the right is the one most probably involved.............everything cool there ?
BE SUPER CAREFUL IF YOUR TESTING OPEN FRAME !
the flat connectors from the right board to the center board (??)
Are you tech savvy ?
there are tests with either external cold or hot air stream to check components under operation. (at least that is one of the tests that I used to use and found quite effective. BUT ONLY IF YOU KNOW ELECTRONICS.PLEASE

I would like to think that I am tek savvy, I build my own water cooled computer and overclocked it to 4.6ghz so I guess I am savvy to some degree but I have never repaired a monitor before, I have checked a couple of youtube videos of bad monitor to get an idea what to look for but nor much of them out there. I saw Wendells video with Logan when they did reflow of the pcb of one of the first korean monitors that poped on ebay, i think it was a Achieva Shimian.

The image below shows the hot spots 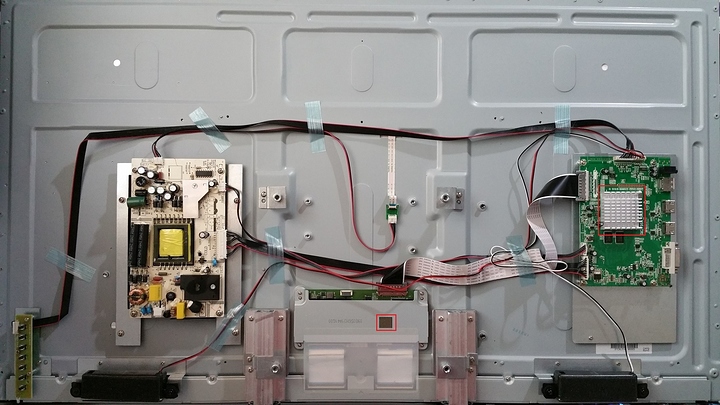 Sorry, just wanted to make sure; I was previously criticized for indicating dangerous tests!
edit 1 = can you get your hands on some COOL, it is a freezing spay, that allows for dropping temp in diagnosed components.
The other one (less sure for these monitors) is with a hair dryer for HOT.
AGAIN I HAVE NOT MADE OR INQUIRED ABOUT THESE TESTS THEREFORE CANNOT INDICATE OR BEAR ANY RESPONSIBILITY FOR POTENTIAL DANGER TO THE COMPONENTS.
I have to say this !

edit 2 = do not leave any marks, in case you have to return, they have 1 year guarantee !

From which supplier did you purchase ? Probably they can just send the defective part ! I do believe this was done in a couple of situations.
edit = 1 all components are on same GROUND circuit ? ( so there is no ground loops).

Hi again Maxcat sorry for the delay I got this monitor from Dreamseller. They could send a defective part the problem is determining which is the defective part and if I do have warranty with them. I will post more images of me taking the panel apart. I think that it might be a ribbon cable that connects direct to the panel which is causing the problem as I have look at other people who have had vertical lines on their monitors,TVs buy I could be wrong I am not expert.

I have tested pushed and plugged and unplugged all ribbon cables but with no luck. Had a look at couple of videos which I would link below but no luck the only thing that come to my mind is pcb reflow or new pcb or in my case new T-con board.

I had a look at the too videos below test what I could on my monitor but no difference.

At this point, for immediate precise info I wish Wendell would step-in !!!!!
For me, these monitor are new tech; not the same as tube monitors and different enough from the one-board desktop monitors !
I know testing circuits with temps is efficient but the display panel does not seem to take temp variants quite well; bad enough to cause permanent damage. When the de-glassing came into from different sources; one thing seemed omnipresent, do not overheat the panel.
edit 1 = I am almost sure you could locate the faulty board with freeze; but I wish and recommend again, for Wendell s feedback !

Maxcat I tried to cool the temp by using a hair dryer with cool air blowing on the T-con board but that didn't make any difference, from what I have seen from different videos on youtube people touch or remove ribbon cables and things either gets worse or better in my case I can bend the ribbon cables and nothing happens, the image on the monitor dosent change and the vertical lines dont increase or decrease they just stay there (by the way I never tried to bend the ribbon cables as they are very delicate but I did touch them and also put pressure on them but no luck). My feeling is that the this T-con board is bad as everything else is fine as I get signal monnitor gets detected in windows checked different inputs like display port,hdmi,dvi, also different cables, computers. I will have a look at this freeze spray for electronic components, or go ahead and order t-con board as its just 20 or 30 bucks and put my current one in the oven. I still haven't decided.
However this video of Wendell is pushing me towards pcb reflow.

Maxcat I complete agree with you that it would be cool if Wendell gave us some of his wisdom, but he is pretty busy guy. Maybe if I made a donation to team PGP or became sugar peep we might get a little bit of his attention.Honestly I dont want to bother the guy.
billgatez December 20, 2015, 2:55am #18

Most likely the connection between the panel and the PCB has gone bad
Personally i would box it up and send it back and go for something different. Because after watching Baraclese go through three displays and then give him an hard time when he went to return them i don't know if i could trust them.

Hey ! I would like one of these boards also ! (absolutely, and any other that you may identify)
And at this point, with your knowledge and delicateness it is much better than returning the whole thing !
I has to return a monitor to dream-seller, with absolutely no problems and at their expense. (might not be the case)

Lol no one @ me so I didn't know I was needed. I suspect if you contact dream seller and let them know you have vertical lines they will fix it. You might have to pay return shipping but they will pay to ship back a replacement I would wager.

The vertical lines like this with what you've already done means its probay the panel itself. Those are usually glued and not soldered so reflow doesn't really help. Sorry I don't have better news.

The glue is kinda like a zipper. Once it comes unglued the heat/cool cycle of the display will slowly unzip and more adjacent columns tend to go bad.

Since it is a common defect in lcd s the support folks would probably recognize it as such.

There can be a bit of a language barrier sometime so use direct plain simple language and that helps :)