So preface before this review. I have “Normal” mice. I have a Logitech G600, G700s, prior to that I had those standard Optical mice that IBM shipped with machines in 2003/4/5/6/7 and I learned how to hack those to be really really good mice for gaming. But…… I’ve really only used “Normal” mice for 7 or 8 years. Since around the start of 2009 as a matter of fact. Prior to that I didn’t really use them. In fact, I had this amazing thing. 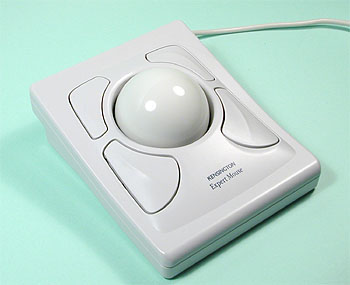 This was great. I could hook it up to my PC at home on serial, even to my laptop (till I had a Dell Inspiron B120 but that had an ok trackpad from what I remember) when I wanted to use it. Most of the time I used my desktop PC as a kid and I had the above mouse, even when I started playing counter strike. When I got off of pentium 2 / 3 machines I got a pentium 4 from my high school in 2010 and it didn’t have a serial port and got a “Normal” mouse.

Now then. As in the title, I got an Elecom DEFT M-DT2DR. Now if you’re too lazy to google that, have an image. 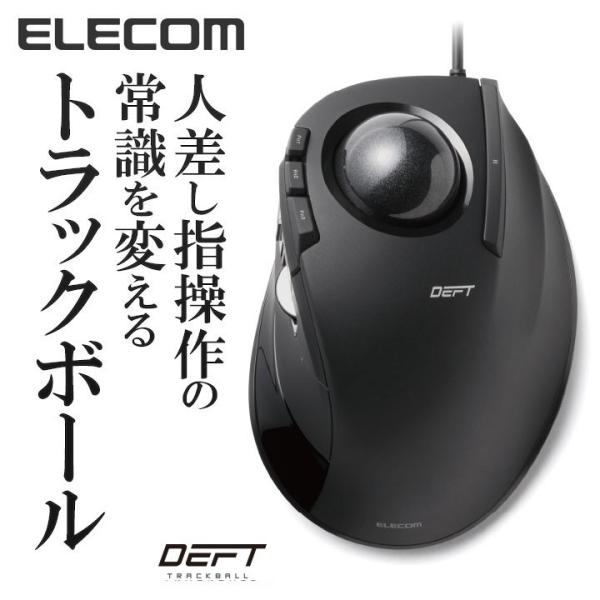 Theres wired, wireless, left, and right handed versions of this mouse. I have a right handed wireless version. Its made out of sturdy plastic and doesn’t get hot in the hand like my G700s does after a few hours of use. Though, this may have something to do with its incredibly low power requirements with just 1 AAA needed and the mouse being able to last for more than 24 hours off of one cell. I left mine on over night when I got home from christmas and for most of the following day, and I still haven’t needed to change out the battery.

Here is a size comparison of the DT2DR with my Logitech G600. 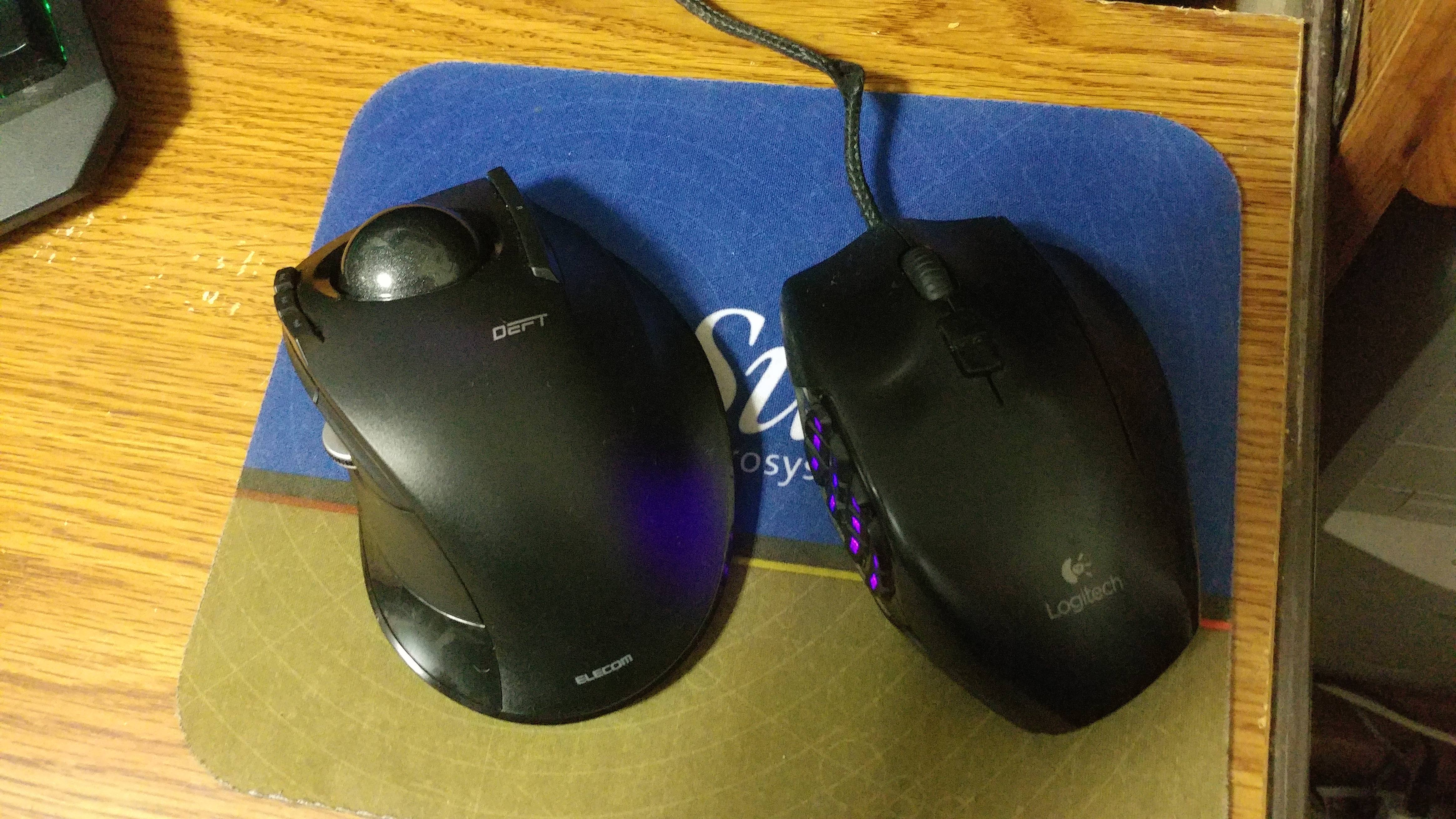 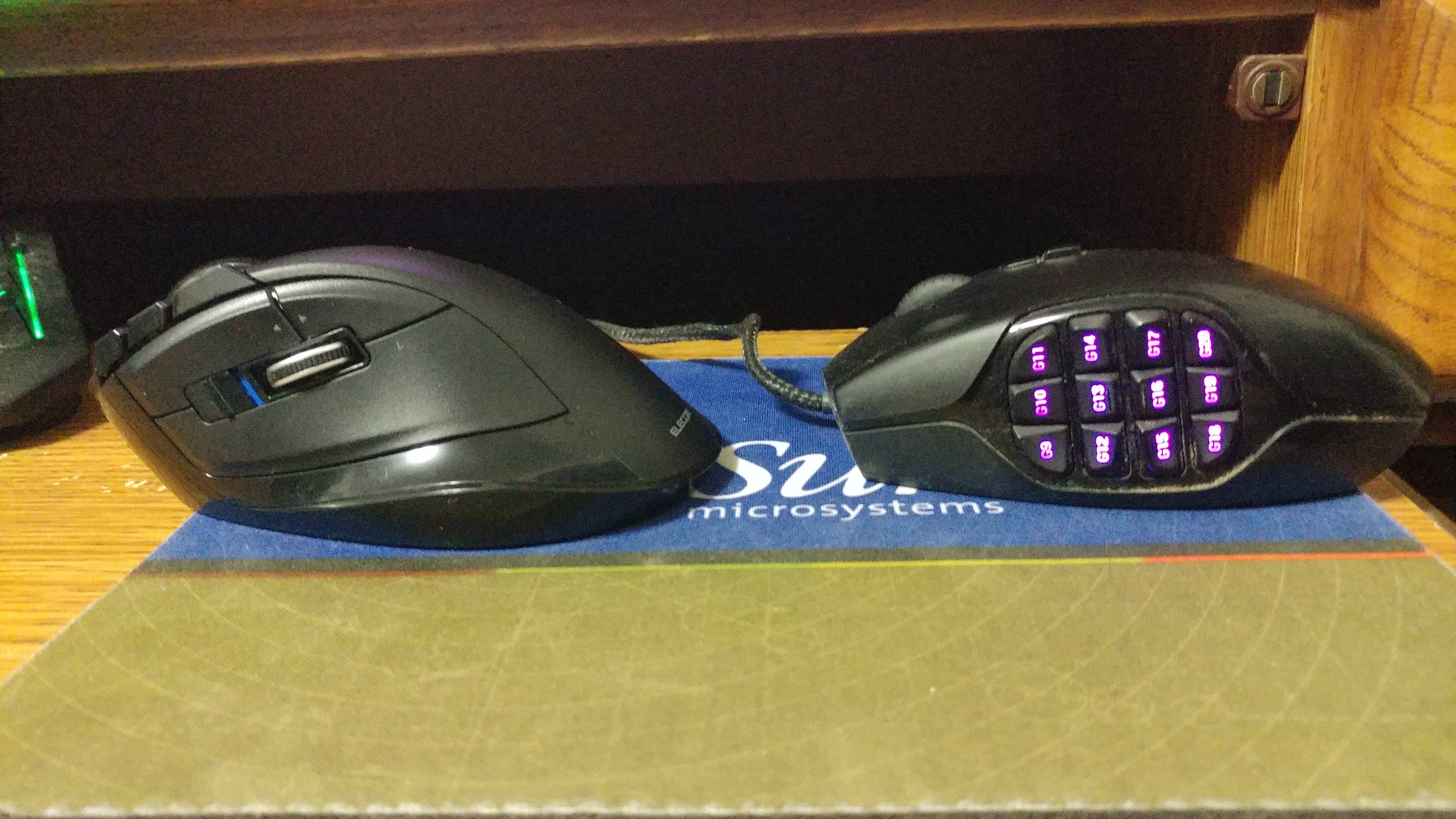 Its roughly the same size. A bit of a wider footprint and a bit taller. Since its not meant to move though these aren’t much of an issue. Now I’ve been using this on my Mac, but the mouse itself has compatibility with anything that is HID standard compliant. There isn’t much of anything for drivers to download and install, you just plug it in and install. There is, however, a utility to program the buttons on the mouse. 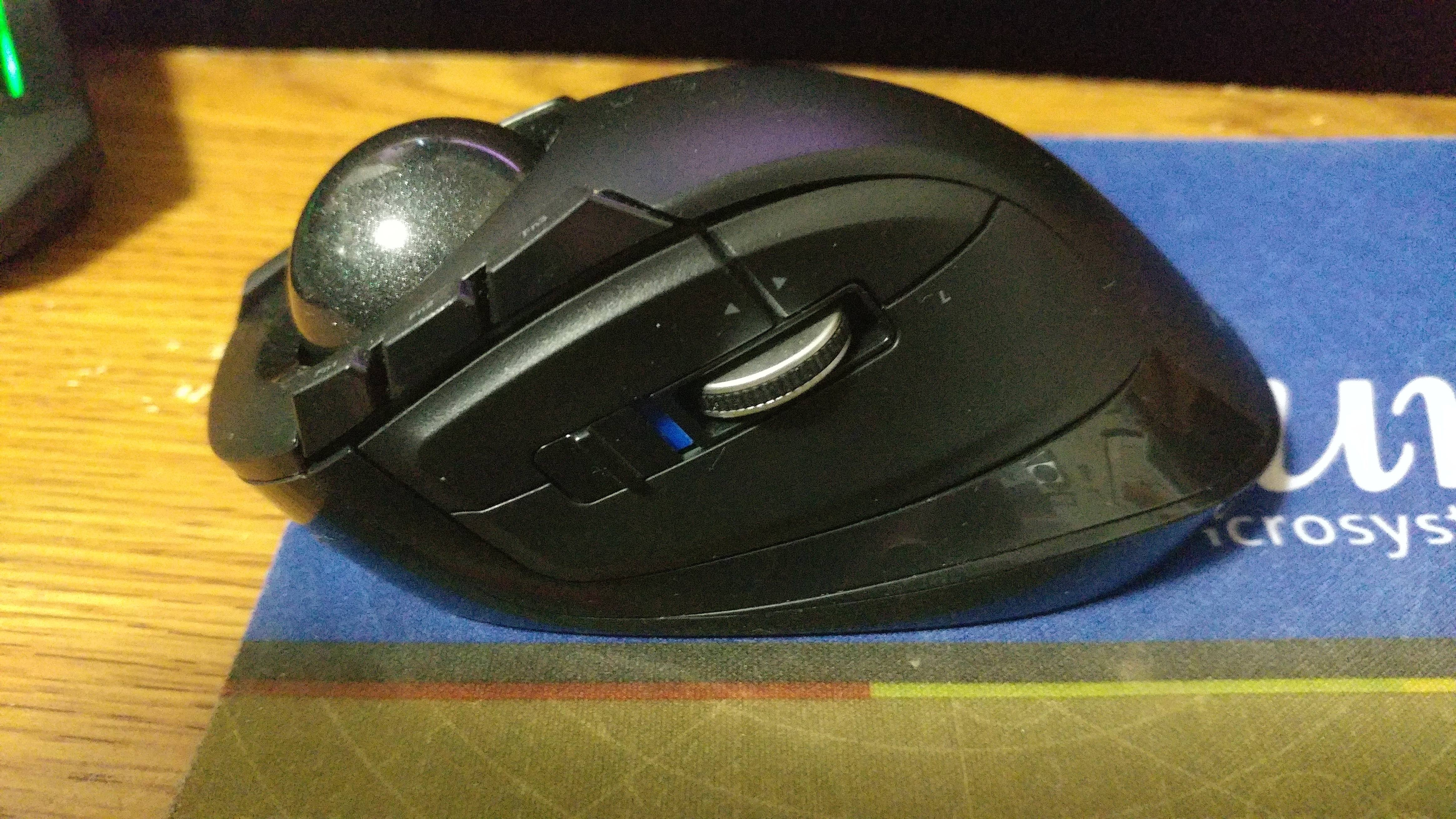 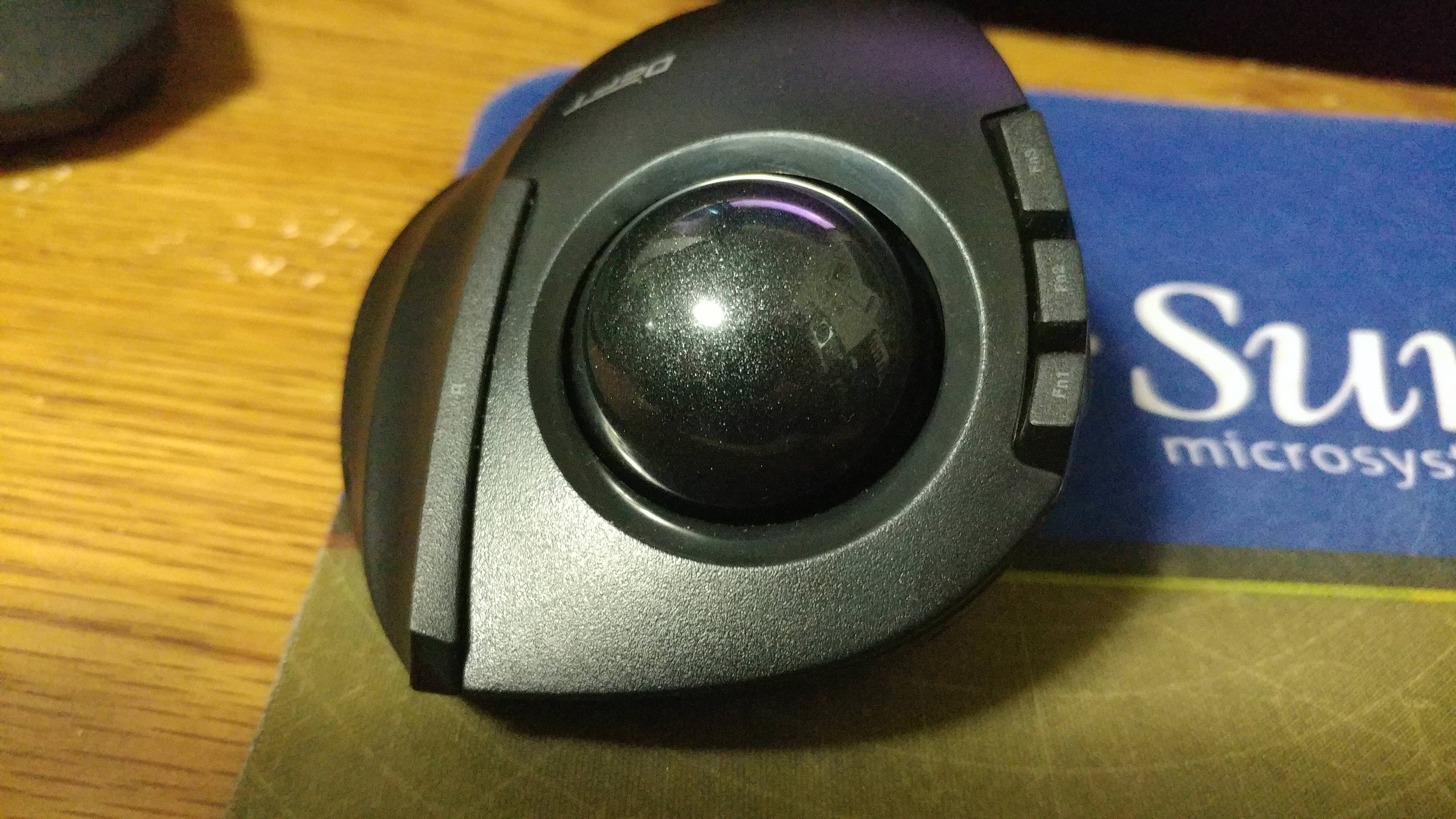 In the mac utility - I’m unsure about the windows one - you can reprogram each of the buttons and save it to a file that is loaded when you plug the mouse in. Sometimes the key combos work, sometimes they don’t. I assume this is an issue with the mac side of things as the major advertisements I see with these from japan on Rakuten and even the local tech stores in Osaka and Tokyo have it pictured with windows XP, so you can see where the market is facing for them.

Aside from the programmable buttons, on the side there is a switch with a blue and an orange setting (at least it looks orange to me, could be yellow for all I know). The mouse has a built in 750 and 1500 DPi set of resolutions. These are valuable if you have a wall of monitors, like if you work in the day trading market, and make it easy to move across monitors quickly. In games I can’t really say that it makes too much of a difference as I don’t move the ball too much. If you had an RTS up and you have a 4 or 5K display at native res it might make the difference, but otherwise nothing much past that. I assume in FPS it makes a huge difference but I haven’t played much outside of Stardew Valley and Age of Empires 2 lately, which is what I tested.

I did notice on the bottom with the power switch theres a Low and High mode. 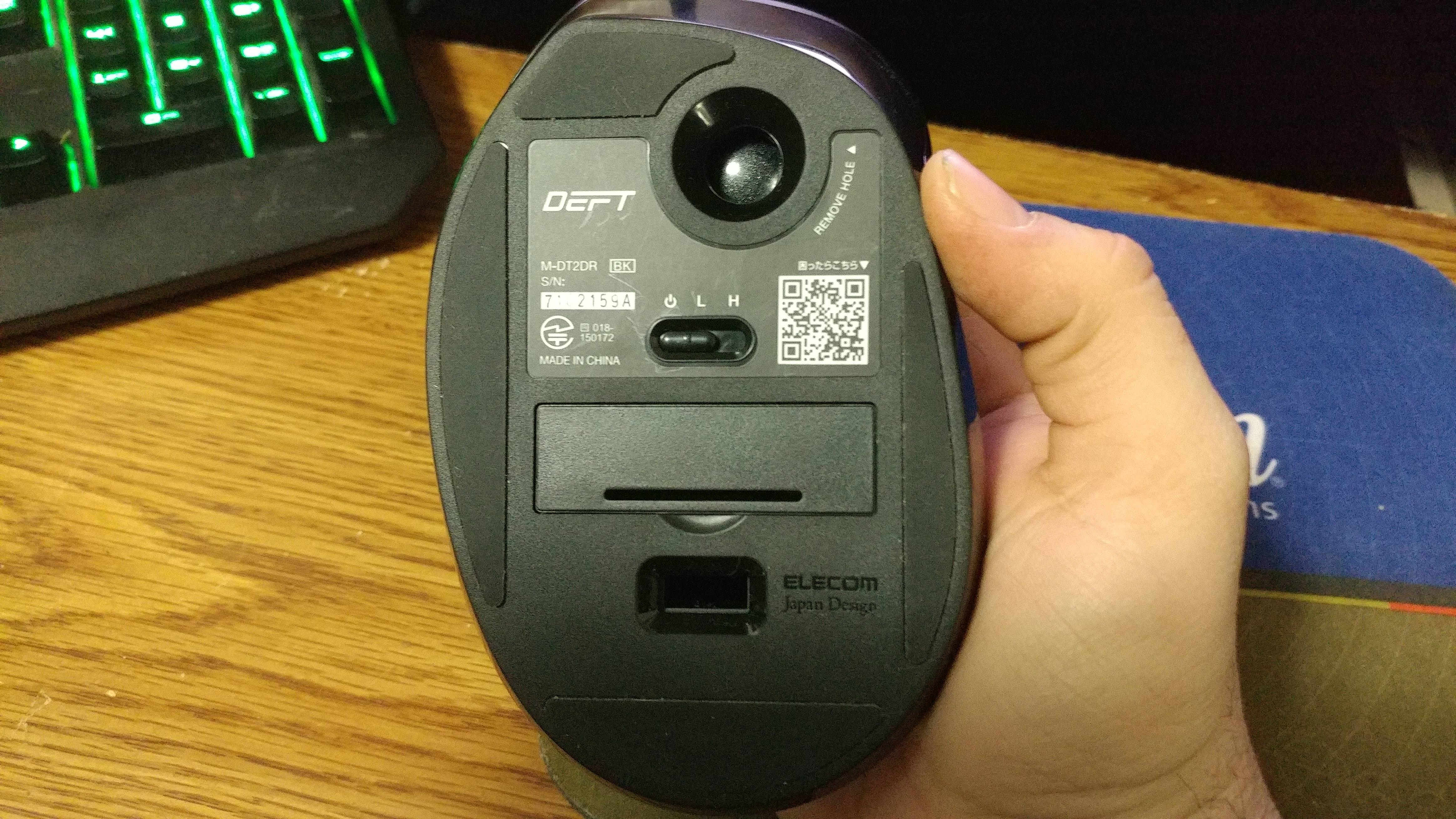 I have no idea if these are permanent DPI sittings, or if they have to do with the broadcast range of the signal from the mouse and how much battery power is used. I know some mice are either-or of those sets of options. Since the manual is in Japanese I couldn’t tell you what’s what; I just keep it in Low mode because I haven’t seen a difference.

Back to the buttons. 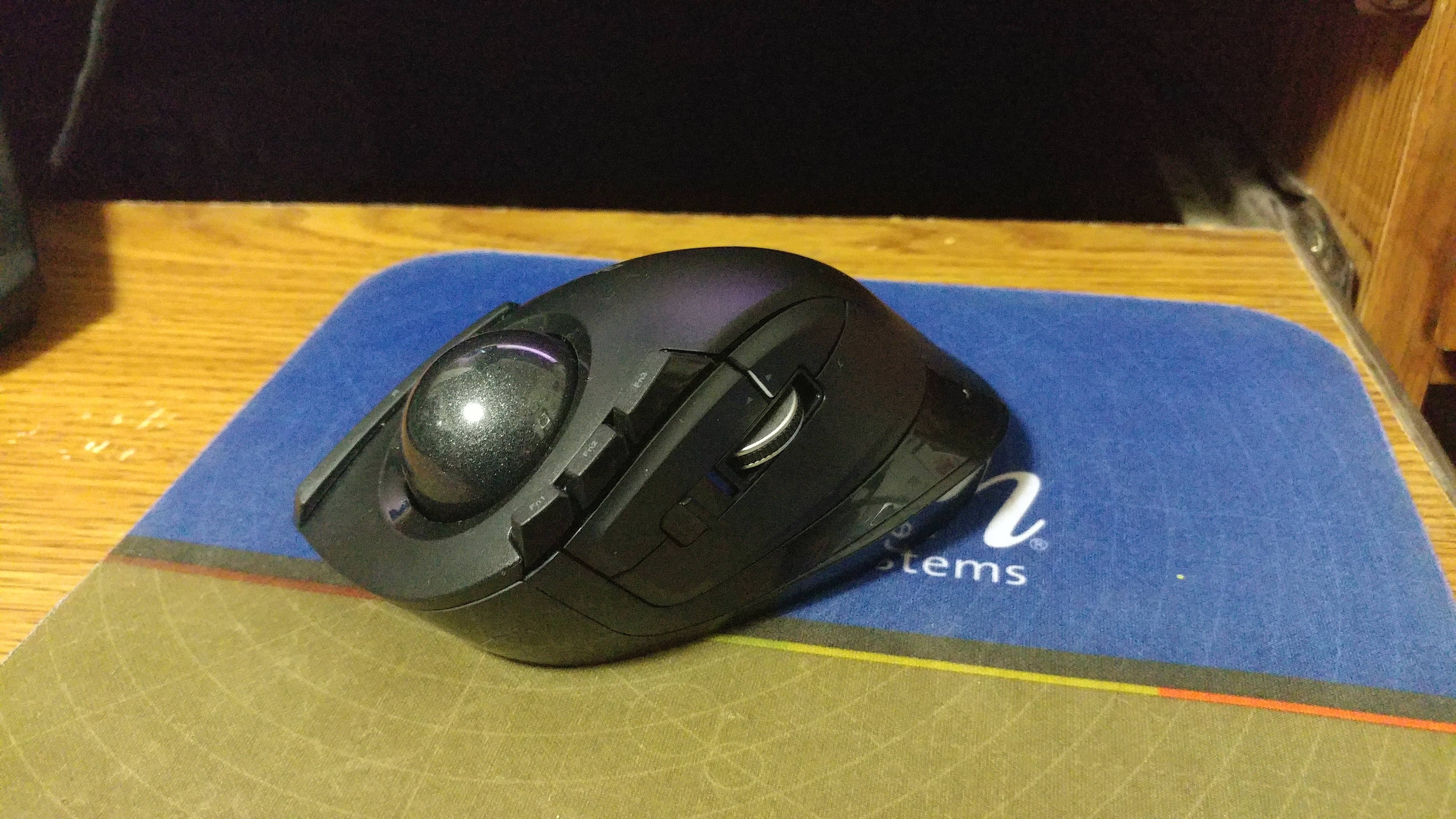 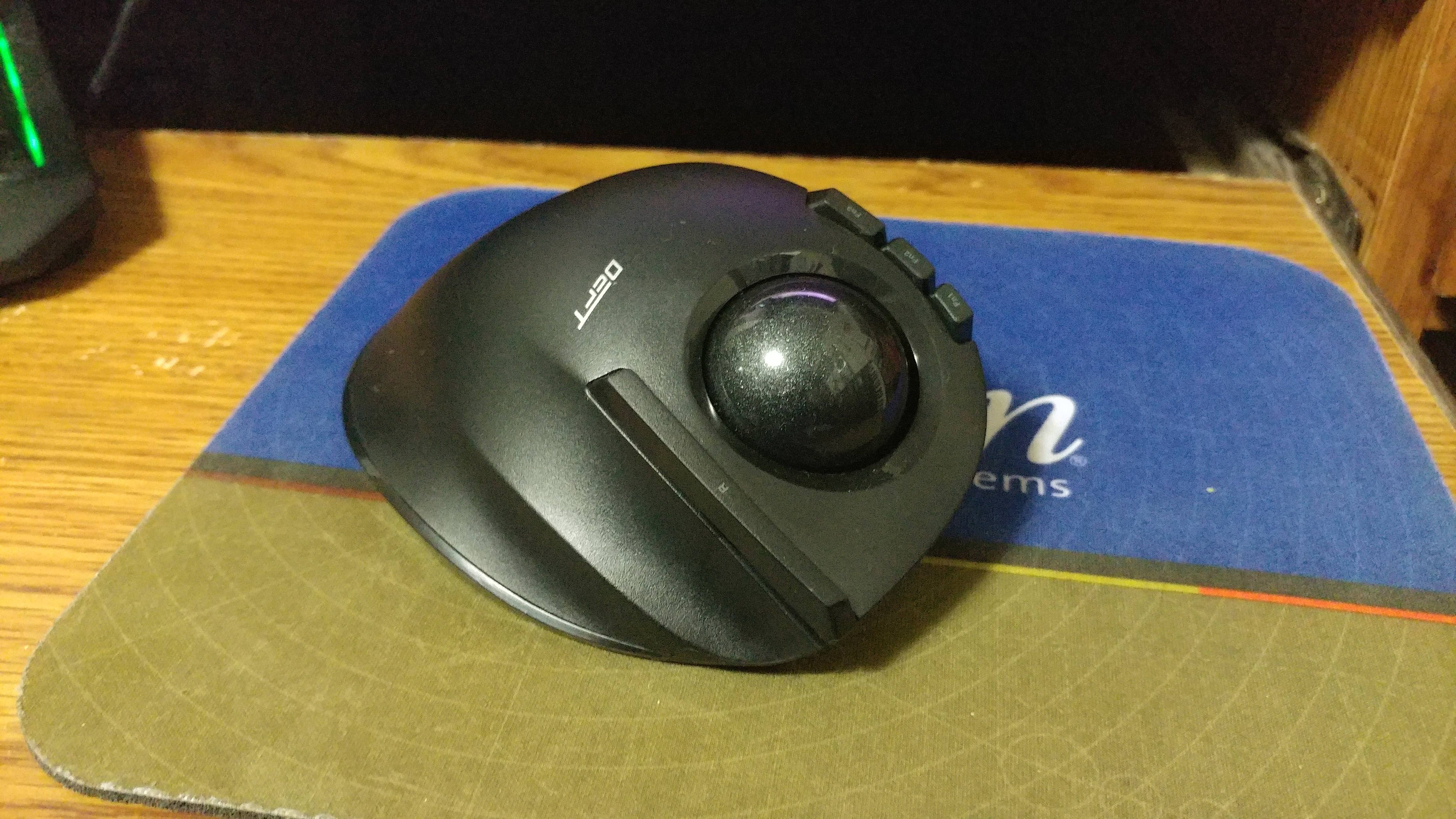 In the first image you’ll notice a button on the bottom. This is pre-configured as your left mouse button. At first I wasn’t sure I’d like that as the setting so I tried it with every other button on the mouse and found that it was the most comfortable. The same with the right button, which in the second picture is the little sliver of a button. To be honest I was more skeptical of the right button than I was of the left because of its size and placement. After fiddling with the mouse for a few moments as soon as I took it out of the box I instantly understood the placement though. It’s set perfectly so that with one finger on the trackball you can right click comfortably, and with two fingers on the trackball you will not accidentally bump the button with your other fingers. I have relatively small hands, but even someone with larger hands or fingers won’t have a problem with this setting. And if they do there is a side-mounted option of basically the same quality.

The other thing that I wasn’t sure that I would like was the side mounted scroll wheel. However, after an hour or two I think I like it even more than having one on top. Seeing as how I originally had a platform trackball to start with, this makes sense.

Now for some of the downsides.

For one, the weight. The mouse is sturdier than most, but with its light weight it could be easy to accidentally slide on some surfaces. So far though, the feet have held it in place well on whatever surface I have placed it on, though this might not be the case for most people. And upon picking it up the first time, some might think the mouse won’t hold up and return it if they have doubts.

Second, the box. Since this is meant for an office for the most part I’m not terribly surprised, but the box is just a plain brown box. I’d upload a picture but Imgur is being a dick so it’ll have to wait.

Third, the buttons. Not about the placement, but about the points of actuation. Upon first use, the buttons were not what I thought in that there are very specific points to push to use them. It didn’t take long to get used to handling the unit, though, but having a greater area of actuation would be helpful, at least to me in thinking of users that can’t reach or for those who think their mouse is broken.

Other than those 3 things, nothing much to gripe about. I have snapped right back into using trackballs almost instantly to the point that now my “Normal” mice feel really weird to use. If you were interested in using a trackball I could solidly recommend this as a daily use mouse, especially if you have multiple systems you would use it with. It feels great, works great, and I have found a new love in using trackballs again.

On a final note, I have seen many recommendations to change the stock ball out for a logitech ball for the logitech marble ball or for the M250. I haven’t had any issues though. 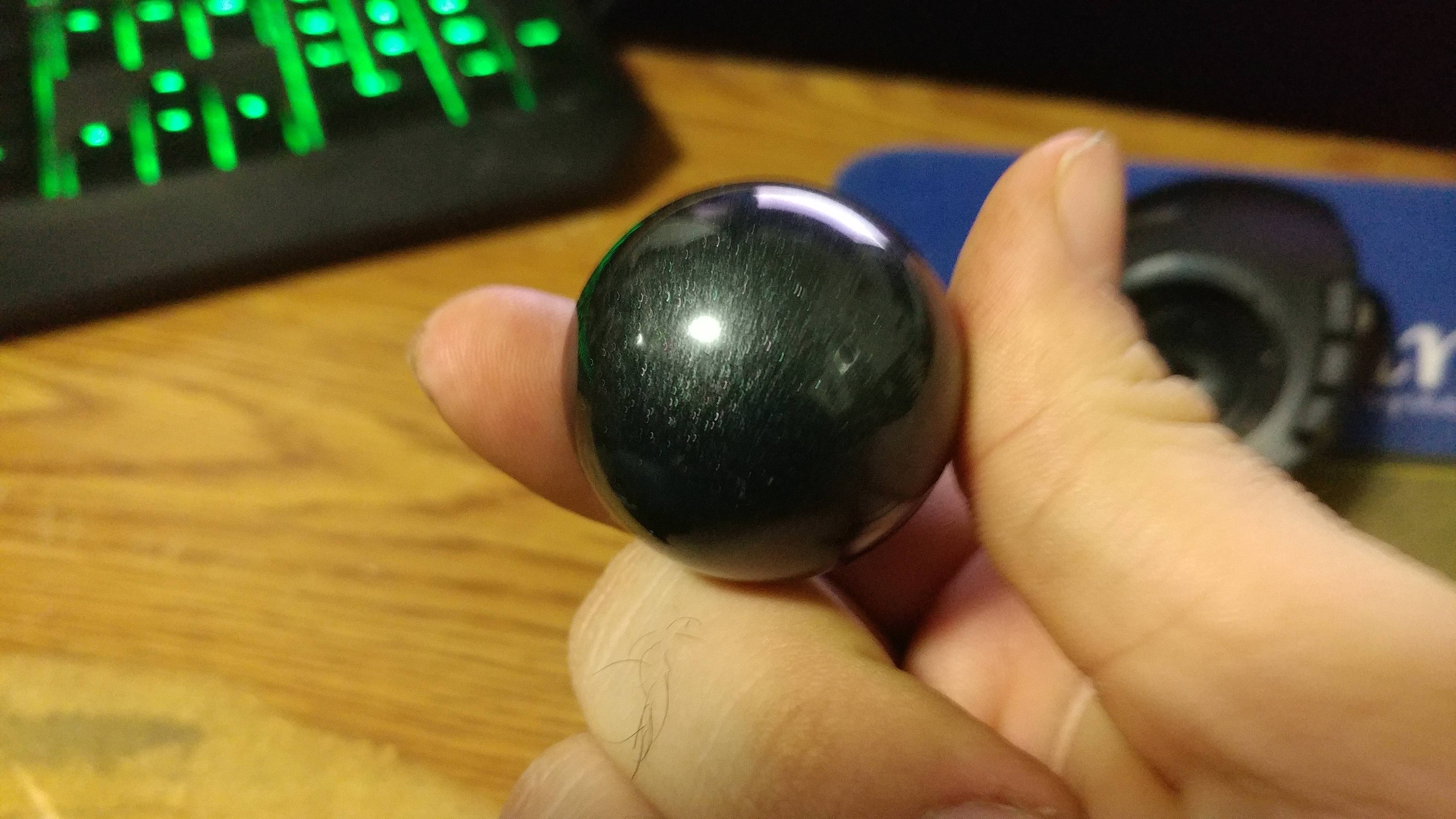 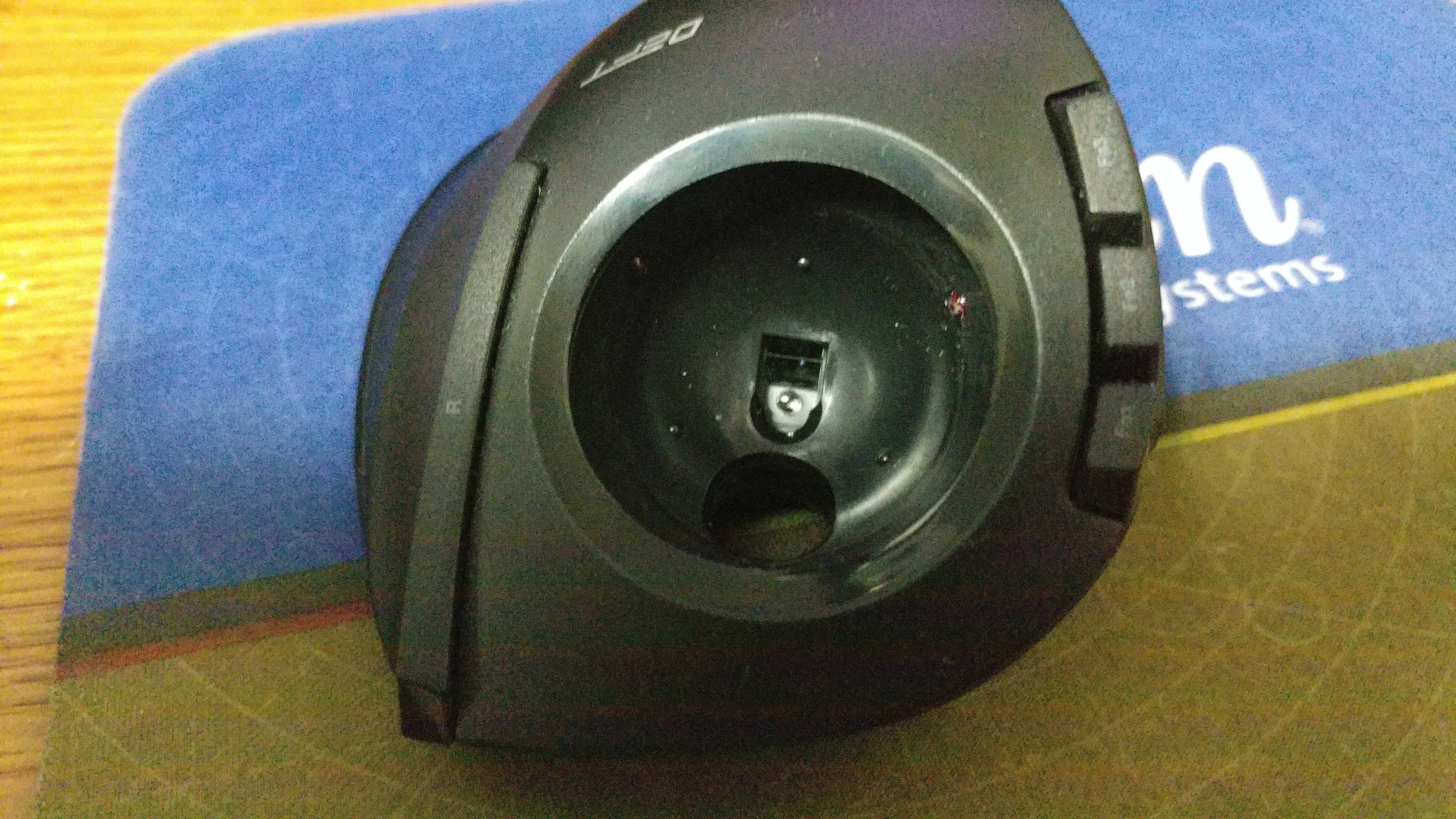 Though, the ball replacement is only going to cost you something like 15 or 20 dollars so if you have issues that would indicate the need of a replacement then it isn’t too costly of a purchase.

I havr been looking for an MS explorer replacment for ever. Thanks for the review. I have not seen this mouse in my 5 years of searching. I hope Rakuten does not kill me on the shipping to Washington state.

Its on Amazon haha. I’d recommend their HUGE model if you’re a heavy trackball user.

Something that I just noticed was that there is a light underneath the scroll wheel that flashes 5 times. I think this is the battery indicator? I’m unsure of that though.

Great review, thanks for linking me to it. I’m surprised you didn’t mention the legendary MS Trackball Explorer. Then again, you said you had the Kensington Expert Mouse.

The light you mentioned is probably the LED for the optical sensor. The Trackball Explorer had a gap between the buttons that the light would leak through. It was always on but was brighter when sensing movement. What color is the light they use?

Nope. Its a laser mouse and it is indeed the battery indicator. Had to dig into the japanese site a bit to find it, but it is the battery light. I’ve been using it every day for hours, leaving it on, and just today it went to 4 bars. The light appears behind the scroll wheel.

Versus my beloved G700s where I have to swap batteries every 4-6 hours or charge it.

At least I do believe it is a laser mouse as I can’t actually see any light when I take the ball out to clean it.

The beam could be invisible. The manufacturer’s website says it’s optical. English is not the best, but it gets the point across. Oh, of course, it was translated by software. That explains it. Well yeah Elecom mostly makes mice for the japanese market. Literally sales anywhere else are a few thousand per year at most.

A while after having the mouse I realized something just now. The mouse has a shutoff timer. So to save battery seemingly forever the mouse goes to “sleep” and is only active when the little bumpers that hold the ball get pushed. Good design.