Hi there, I was looking forward to make a Windows VM for gaming inside a Linux Host. I’ve had not much success with my setup as I almost always had an AMD card with reset bug and other weird behavior in Windows VM. I ended with a 2080Ti for guest and a Radeon VII for host.

I made my VM on Manjaro for host and everything is working fine now.

I only have questions about UPS and how does it work exactly. I tried to search on the subject but I dont know if I understood well.

I know UPS is only updated when something is happening on the screen but is it normal to only reach 40-45 UPS on this setup ? (FPS on LG is rock solid 144).

My VM is plugged to my monitor on HDMI with a 1440p resolution 144Hz (instead of using a dummy adapter) and my monitor is switched to DP as it’s also connected on my host GPU. But Windows still thinks the HDMI monitor is plugged in.

Here is my GPU-Z on my Windows VM (1.1 is only when no load is detected) 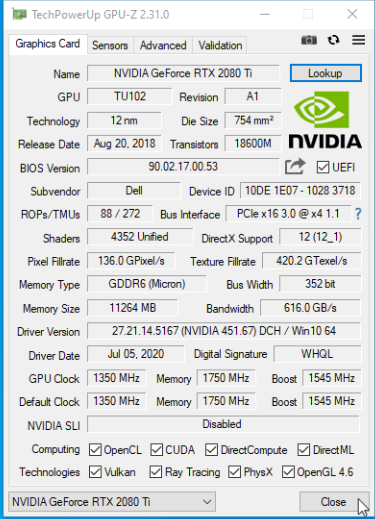 Is this the x4 that can bottleneck UPS ?
Anything could be done to improve UPS ?
What can influence UPS ?
The egl warning is about the host GPU not able to display frames as fast as guest is sending them ?

My goal here was to permanently move from Windows for gaming and having my VM in a easy to switch thing in my Linux host, what LG is doing really great, but it can’t be used to play high FPS titles and playing competitive FPS at 40-45FPS is not possible. (For now I use a DP switch to switch between my host and guest GPU output but the way LG is working is really nice and way better for multi tasking / switching)

Thanks in advance for your lights I hop I was clear enough in what I said.

Do you mean FPS?
Nevermind. I googled it. It’s not the same. My bad.

Hi, no I mean UPS

Here is an exmple : 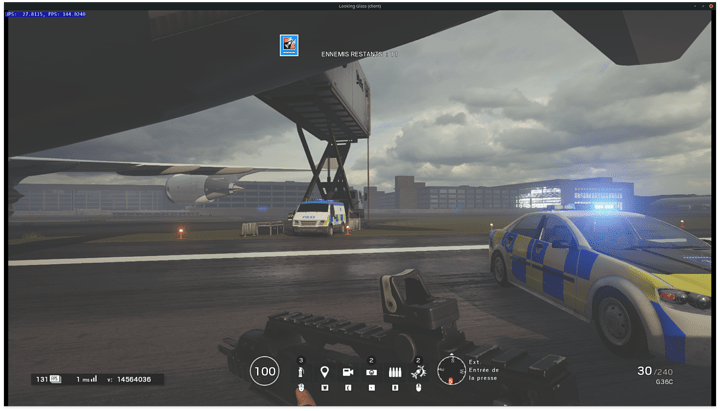 I see.
I’m not well versed in hardware pass through, VM gaming and the tuning of it. But there are others here that are.
I think @SgtAwesomesauce dabbles in it. He might know something

My understanding is that looking glass only sends an update if it needs to. It’s possible your peripherals aren’t taking in more than 40 updates per second.

Not super sure on that though.

That’s one of the thing I was thinking about but it should look the same on the physical display then?

(On phyical display everything looks normal no stuterring or else)… IDK… (inputs only goes through LG client and are not passed through VM. I may try then)

Did you mean input devices or other devices?

Stuttering could be a lot of things. I’m heading into the gym. I’ll catch up with this when im through.

It’s worth noting that last I checked, looking glass has limited bandwidth and so trying to hit [email protected] is probably using all of its bandwidth.

Hmmmm. I don’t want to lead you in the wrong direction, so I’ll ping gnif to see what he thinks.

Alright, I’ll do the math when I get back to my desktop.

I’m going to sleep for now it’s almost 1am here but will be back on my desktop in the evening if you want any information.

To confirm, yes, UPS is how many updates per second are being processed from the host application. The primary cause of low UPS is one of four things:

Thanks for those information.

Still LG is a really nice piece of software, and I’ll look closely it evolution.

So in my case I assume game load on GPU and x4 link may be the problem ?

(iGP is of course out of the list here)

I should have been more carefull when choosed my motherboard, it was a bit like a impulsive buy…

EDIT 2 : I have no swap partition in my Linux setup is it important for LG ?

So in my case I assume game load on GPU and x4 link may be the problem ?

Could be. He listed a number of things above.

x8/x8 would be preferable.

EDIT 2 : I have no swap partition in my Linux setup is it important for LG ?

It’s not about size, it’s about speed. Swap just adds size. Swap can never be anywhere near as fast as ram (which is why we have RAM in the first place)

I should have been more carefull when choosed my motherboard, it was a bit like a impulsive buy…

Passthrough motherboards do take some choice, but what board do you have? We might be able to make some improvements.

It’s the MSI MPG x570 Gaming plus.
I didn’t care enough when buying it but I must admit that I should have purchased something else.

You can also add the ASUS TUF Gaming X570-Plus to the list of motherboards not to purchase for Looking-Glass/Passthrough (unless a PCIe 4.0 GPU comes out). The second slot is 1 x PCIe 4.0 x16 (max at x4 mode).

However, I would like to highlight that on the latest BIOS you can pass a USB Controller (Two ports for the RiftS/Schiit DAC), SATA Controller without the system crashing or freezing when spinning up the VM or shutting it down.

If you want more lanes you need to go to the Threadripper platform.