I'm leaning toward the HX1000i since that will allow for more upgrades in the future. If I go with the HX850i I could swing a 240GB SSD for the linux drive. No matter what a PUS upgrade is wanted/(need). Right now the 750w that I am using while it does cover my current needs with the wanted changes in the future I feel the 850w or 1000w could be used in another system.

The nactua is on the list simply because it is much quieter than my current cooler between both the pump and the fan. I would love to do a full custom loop but I think that will wait for a entire new build.

Is there anything you think I missed or overlooked? All proposed changes are not set in stone and I am willing to take comments and suggestions over the next week. Any positive input will be gladly accepted.

I plan to use some of the parts coming out of the current rig to "upgrade" the desktop my girlfriend is using. Or bring an older rig back from the dead. 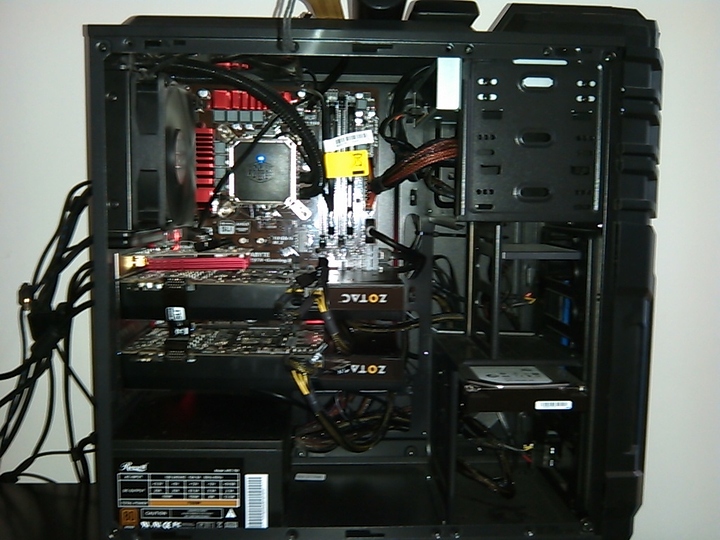 I know the cable management sucks but that's what I get for using a crap case and non modular PSU.

Hoping to stay under $500 as much as I can. I just built the system 12/2014 so its not that out dated. I do wish I had gone with a single 900 series card rather than the dual 760's. That upgrade is planned for the future after I sell a ton of stuff I have sitting around.

Right now with the HX1000i my cart is sitting around $470 from newegg.

We have the same case! Neat!!!

The case will be fine unless you need as much airflow as possible or the Enthoo Pro will do a better job then do whatever you feel.

In short that set up you have is decent enough, but like most boxes, if you slap a 380 in there you will be find. If you want a better car get a 390 and don't think about it.

Personally I HATE this case. The air flow is crap and it is just ugly.

Replace the graphics card and you should be fine :3

The case does fine for me x3 though I guess if you're after airflow to the max then do as you please with that I guess. The Enthoo Pro does pretty well from what I have seen.

My 760's play all my current games maxed out on 2 1080p monitors no problem at this time. I am more interested in upgrading cooling, case, power, and a second SSD for a dedicated Linux drive.

Well this was my suggestion anyways, you could always just sell the cards after you get the new one to finance the rest, if you're into competitive gaming you could go this route with a 144Hz free-sync display

I'm confused how that 380 is an upgrade? Sorry if I am miss understand but could you elaborate a bit please.

It just lets you make use of the free-sync on the display, and also eliminates and dual GPU issues you may encounter

I have never had any issues with dual GPU in any of my current games under windows. Is AMD that much better for linux? last time I used linux it was on a box from a big box store without a dedicated GPU.

I will have to look into free-sync over the next few days.

I am more concerned with the PSU at the moment simply because I had one of these spike and I believe it may be what took out my CPU.

I don't think either company works well under linux, nvidia's drivers overall are a bit more solid, however you could always do a hardware passthrough to a windows virtual machine

If your PSU is doing that then ya, time for a replacement.

That's why I included a prospective parts list in the OP so that people had a bit of an understanding of what I am currently looking at along with knowing I am open to information on future upgrades.

SSD, case and a new PSU should be good to go then.

You don't really need a tray for SSDs, just throw them anywhere really

the tray allows for me to put both my SSD's on the back of the motherboard tray. I would also like opinions on the nactua cooler I have listed. My current cooler keeps things cool but as stated its LOUD as hell.

Not another Rosewill PSU. While there support is good and the RMA was timely I don't quite trust them after the last one about killed my entire system. I would be willing to look at the HX850i or other similar PSU. I was unsure of the OZ SSD's thats why I picked the patriot fisson based drive.

You mean the pump is loud or the fans on it? I really don't find a noctua cooler to be worth it

Just mount the SSDs with velcro or scotch tape

both the pump and the fan are loud. I have rigged it up for just the pump to run and its louder than the PSU fan. The fan mounted on it is ok until it ramps up then its so loud my girlfriend asks me if its going to explode from the living room through the wall lol.

I guess I could just toss the SSD in one of the drive bay for the time being till I figure out my future plans. The main reason I like the case is the water cooling support so that I can use it for a future build.

Like a custom loop? Seems a bit unbalanced with that hardware

Should check out the define S for that though

I would love to do a custom loop but think I will save that for a future build. I like the define S but have been told it will be to short for my full ATX board. Is this untrue?

I am down to $349 now shipped. Plus the kid that wanted my dual 760's is still interested I might be able to grab that R9 380 though I'm not sure of how it is an upgrade from my dual 4GB GDDR5 cards. I do like the fact it is able to push 4k.

Also for the time being I would like to keep my optical drive and the define S doesn't seem to allow for that.