Hey guys I’m trying to help my friends little brother upgrade his desktop into a gaming pc as cheap as possible. I am unaware of how amd apus work so I am here to ask if the CPU is good enough if I just add a gpu, psu, ram. Does this CPU require a certain type of gpu or can I throw anything in it? Any help is greatly appreciated thanks. Here is his system info…also any other recommendations is welcome thanks! 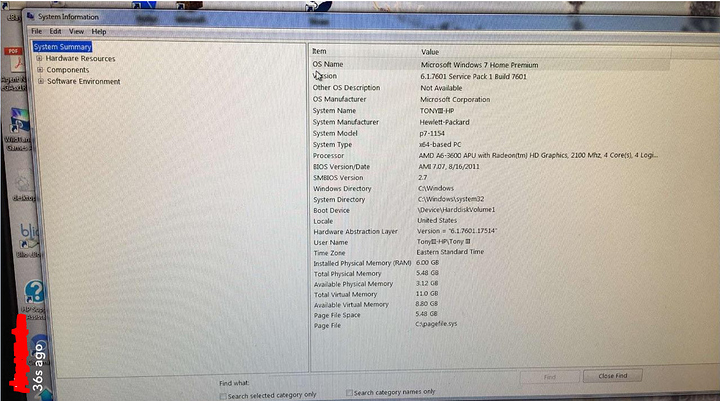 Unless I’m mistaken, an APU is like a CPU+GPU in one. Most Intel CPUs are effectively the same thing.
Using an aftermarket GPU is a major upgrade from an APU;s built in graphics capability.
That CPU is pushing it tho… If it works in your games fine. But you might need to upgrade.
You could buy a faster CPU that is compatible with your motherboard. They are probably cheap on eBay by now. That, along with a GPU upgrade, could extend the life of that computer a little longer. Only upgrade the CPU (aka APU) if you need to.
YMMV

You could buy a faster CPU that is compatible with your motherboard.

This is an FM1 system… The maximum is a quad core AMD that is way slower than the FM2 stuff, and the FM2 stuff are fairly slow…

Gaming machine from this you will not be able to make easily. The best CPU for FM1 is a quad core at 3GHz, either the 3870K APU or Athlon 651K CPU…
This is barely going to support RX460 or RX560, and those are low end cards. Unless this dude is light gamer or just coming into PC gaming and don’t want to try anything too demanding - OK, I can see that working, but not if he tries to play anything more serious, like even some indie stuff like Cities Skylines. That game drops under 40FPS on my Athlon 760K (4GHz)… Hand of fate will also tax it heavily. Nothing triple A will work on this. Forget about Call Of Duty, forget about Witcher 3, GTA 5, Doom… Just forget those. League of legends, World Of Tanks, DOTA, this will work somehow well…

Thanks for the quick replies! Do you think building from scratch would be best? If so links to pc part picker for cheap beginner builds that can handle AAA on low settings or cheapest build. Thanks!

Best bang for your buck would be a used dell with a i7 from craigslist. at least a 3770 quadcore or better. You can sometimes get those for like $100-150
The APU on those is halfway decent, but not great. Not an ultra experience in Doom.
then get a GPU like you were talking about and you have enough to game competently for a couple years.

As we are looking at a HP prebuilt here, the PSU might be some special thing. Upgrading this may get… interesting.

Do you think building from scratch would be best?

Easiest for sure. Can´t tell if it is the best option though.
Either go with used as @NetBandit suggested already or if you want to go with new parts Ryzen 1300 + 1050ti or RX 570 (depends on price) will give you a significant jump in performance.
When going used or new, make sure to not cheap out on the power supply, else you may end up with smoke and tears.

A system I could come up with on the quick:
Ryzen 1300
1050ti
Seasonic PSU
https://pcpartpicker.com/list/twR2tJ
Edit: Build optimized for @psycho_666

Or you could say F it and blow some dough on an uber gamer rig.
If you want to do that, there should probably be some ok deals after Christmas

I can agree with that…
For cheaper-ish system a second hand pre-build one is definitely best bang for a buck…
3000, 4000 or even 2000 series Intel holds up pretty well nowdays. An FX system for cheap (and I mean really fucking cheap) will also be huge with a proper GPU…

A system I could come up with on the quick:

I have just two issues with that… For 80$ you can get 2666 Crucial ram… and… Please give him B350 board… Not for the OC… For the build quality and better support. VRMs and everything… PLease, for the love of little tiny crying black baby Jesus, just give him B350 and 2666 ram.
https://pcpartpicker.com/product/d8dxFT/crucial-ballistix-sport-lt-8gb-1-x-8gb-ddr4-2666-memory-bls8g4d26bfse
https://pcpartpicker.com/product/sfcMnQ/asrock-ab350m-micro-atx-am4-motherboard-ab350m

Ya its either upgrade existing or find a cheap pre built i5/i7 and throw a seasonic psu and 1050ti in there.

What are the good cheap amd CPU pre builts I can get 2nd hand? Fx? Others? Dont know anything amd other than ryzen.

If I choose to upgrade existing one. Should I get a better CPU?

I would just throw in the cheapest 1050 or 1050 ti (preferred) and thats it.
The A6 is a quad core, he can always upgrade the cpu/mb/ram later depending on how much he games and what games he ends up liking.

I like that idea. He can upgrade as needed. What about a good psu?

I’m a PSU agnostic
I would use the one already in it and maybe just unplug the DVD drive if your concerned.
My dau’s build has an Antec 380 watt with a 7870k and a 1060
IMHO the 300 watt stock unit is more then adequate for the job.

Thanks. I forgot the 1050ti gets the power from the pcie port. So no need for PSU.