The reasoning for the 120mm AIO cooler is because my cause can't hold any bigger ones.
I'm not looking to change anything else besides those parts.
I'm also looking to Over-clock it to 3.9 to 4.0 Ghz ( depends on what I can get ).
What are you opinions? What do you suggest I change an what parts do you recommend I change and why?

So far I've been recommended that ASROCK TAICHI motherboard instead of the Asus Cross-hair.

The crosshair seems a bit pricey, every thing I've seen shows the b350 boards overclocking just as well as the x370. Only if it has some features you absolutely need/ want you can expand your options and save some cash.

I have a crosshair tho, mostly for the water cooling features.

Also if you're stuck with a 120 aio I would suggest the the thickest radiator possible. Or even a massive noctua no worry of a pump failure there.

So far I've been recommended that ASROCK TAICHI motherboard instead of the Asus Cross-hair.

Why were you recommended the Asrock Taichi? If you plan on running Windows 10 in a guest VM and want to passthrough a graphic card to the guest VM than it seems an Asrock Taichi would be the easiest motherboard to setup the guest VM. Asus and Asock use the same Chinese board manufacture. The only thing they do now is design their motherboards.

The Noctua Heat-sinks definitely can't fit in this case lol.I'll look for a 120 MM with a thick radiator and post it here to see if it can work.

depends in what time frame you want to roast your toast on the VRMs I guess.

Because in short: basically all B350 VRMs are shit.

Are b350 actually shit or is that only compared to overbuilt x370?

This has alot of great reviews. What do you think?

Shit meaning theoretically slightly worse. Like those corsair psus everyone loves to hate on

Are b350 actually shit or is that only compared to overbuilt x370?

Completely fine for R5 and upcoming R3. They are technically fine for R7 but high overclock 24/7 puts a lot of stress on them and they get really hot.

They also have less phases to begin with so chances are less stable overclock.

That's the risk with any overclocking though.

Yes but with everything cranked to max the VRM of the Taichi runs ice cold.
It's a matter of quality and (in the case of the Taichi) also quantity because of the sheer amount of MOSFETs.

The Taichi has slightly better VRM than the ASUS one.

Search feature exists. It is the hourglass thing next to your profile photo at the top right.

I would personally recommend to go just ATX.
And then just buy a decent X370 board if you want to get the best performance out of a R7 cpu.

The B350 boards are pretty poor wenn it comes to vrm implementations.
The best B350 boards are the Msi B350 Gamning pro carbon, and the Msi B350 krait gaming, those particular boards have a 4+2 powerphase design, but with doubled up components on each phase.
Which means that they have some of the highest current capabilities of all B350 boards.
But the quality and efficiency of the used Nikos mosfers on Msi boards arent that great.
But if you put enough of those crappy mosfets on a phase, then combined they dont suck as bad.
Like Buildzoid also mentioned in his video.

As i have looked to the vrm implementations of pretty much any B350 boards myself.
And they are all pretty cheap stuff.
I personally would not recommend them for overclocking R7 cpu's really.
You are definitelly better off getting a decent X370 board.
But there is not really much choice wenn it comes to m-atx unfortunatlly.

list of boards that i could recommend in order.

If you are still looking for a small formfactor pc regardless.
Then there is a decent mini itx option from Asrock.
The Asrock X370 Gaming ITX.

Thanks for the posting this !

Yeah that's why I've been recommended it but the I/O on the asus is what I also need.

You don´t need an AIO with Ryzen. Running the Noctua NH-U12S results in idle temperatures like this 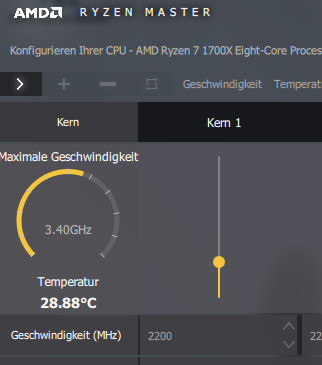 at very little noise output. And if the fan was to fail, I could just move one of the case fans over to the heatsink and continue my work.
Full load 3.4GHz after half an hour gets you in the high 60°C range. Noise levels stay in the very-quiet zone.

But I'm looking to over-clock mine to 3.9 to 4.0 Ghz and keep it there steady all the time though

You'll probably want a better cooler to hit those speeds

Speaking from experience, no air cooler can keep clock speeds that high at low enough temps (<75*C). You will need an AIO liquid one for that.

A mild overclock of 200Mhz however like MazeFrame's really is fine on air however. (A stock frequency of 3.0 with XFR is actually always at 3.2Ghz).