It’s a 905P. It’s in the PCpartpicker list in the first post.
Good intention and all but … yeah.

Does not make any difference. The most recent benchmarks on the PCIe lane count are margin of error between 16x and 8x

Received the TR3970X today with the Asus Zenith II Extreme due for delivery Thursday.

RAM is proving difficult to source, all of the memory I have to hand either in my parts drawer or in systems at home are DDR4 RDIMMs.
I haven’t been able to find any stock of the two 16GB ECC UDIMM models from the Asus QVL.

A sign of the times… this is my first AMD build ever for my own use. I’ve been an Intel loyalist since the 486SX-25.

the latest version of intel optane SSD’s can be used on AMD,

Any optane drive can be used with AMD.

What you might be confusing is the drive cache BS that Intel marketing pushed at the launch of the optane products.

If an “Optane supported” line on the CPU blurb was a requirement my current chips wouldn’t work as they predate Optane.
Yet I actually have both a 905T and a 32GB Optane “Memory” m.2 I use as a block cache in this system and they work fine.

Otherwise… sitting here looking at this sight with growing impatience/excitement: 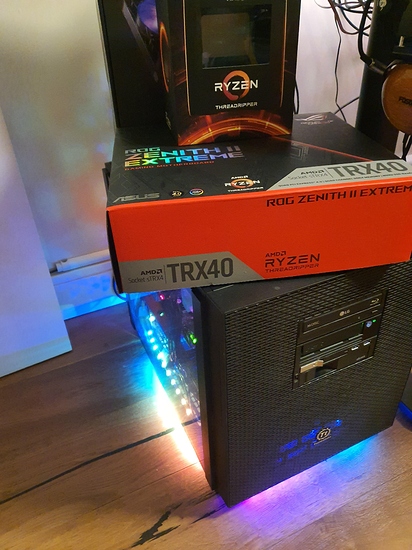 Ran a few benchmarks for later reference. Reckon I should nearly triple my ~6000 Cinebench R20 score…

Found some Corsair Vengeance LPX 3000mhz UDIMMs in an old system so I planned a lazy Sunday evening putting everything together on the motherboard box and seeing if everything works. 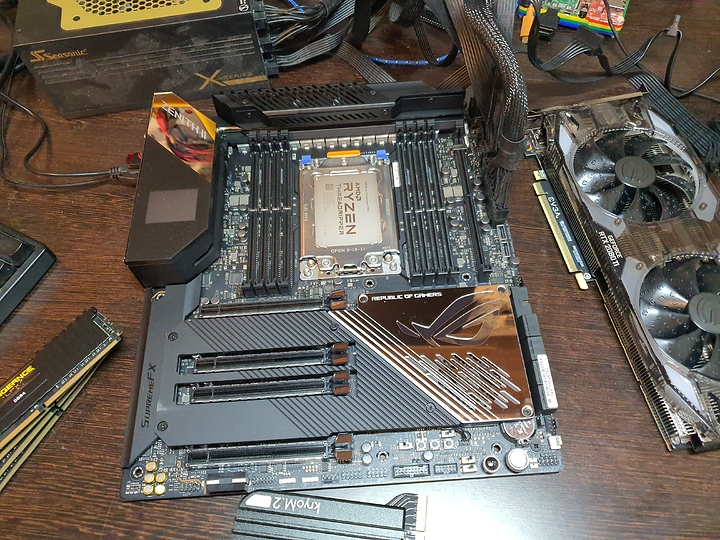 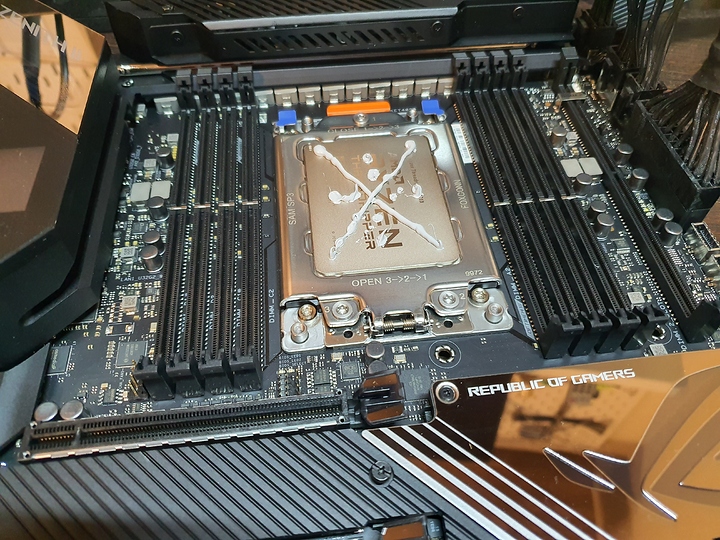 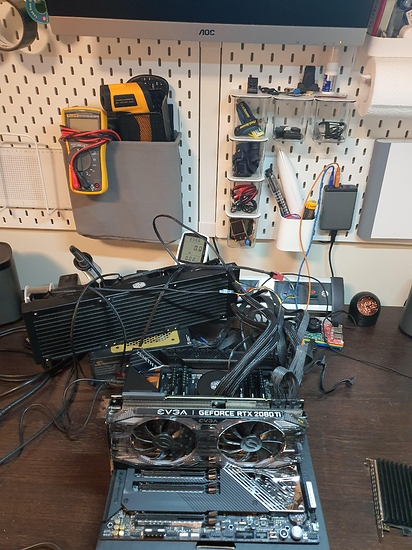 Put everything together on the workbench, hooked it all up to an old seasonic PSU and she booted first time 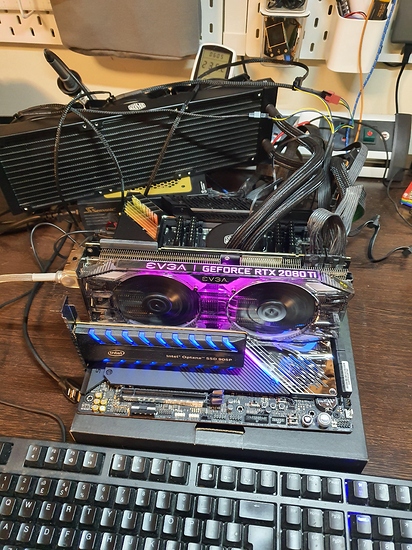 I have rethought the storage somewhat:
https://pcpartpicker.com/user/cros13/saved/jtwq3C

I’m sticking two 2TB 970 Evo Plus in the DIMM.2 for use as a scratch drive. Not sure whether to do RAID 0 or JBOD…but I want a single volume and any data on there will be expendable.

Just waiting on the postman with the ECC now.

Ran Cinebench R20 again and it’s just shy of a score of 17,000 and almost exactly triple my previous score.

Ran Cinebench R20 again and it’s just shy of a score of 17,000 and almost exactly triple my previous score.

I feel that Cinebench R20 would be a poor test because the system wouldn’t have enough time to load all the cores.

That’s an impressive score though.

Yeah, Not too shabby for stock. I’ll beat that once i get around to a little overclocking.

I did lose about 300 points on Cinebench after doing a BIOS update on the zenith II from rev. 0403 to rev. 0602 bringing the exact score down to 16671.
Of course the release notes for 0602 tout “Improve system performance”… probably from a regression in the BIOS revision in between.

Yeah, who knows what’s up there. Bios updates fuss with stock voltages sometimes, so you don’t get full PBO numbers sometimes.

Got the Samsung M-die DDR4-2666 ECC UDIMMs today. Popped them in and overclocked straight to DDR4-3200 no problem.
Latencies went a bit nuts by default, but I managed to get it back to CAS 20 and the other numbers into reasonable territory without a voltage bump.
I have engineering samples of industrial temp, conformal coated DDR4-2933 ECC UDIMMs on the way on a 3 week lead.
Manufacturer promises me 32GB DDR4-3200 ECC UDIMM samples later next year.

Just as a quick note… ran into the threadripper MCE bug hard when I tried installing Manjaro Linux again. Couldn’t edit to turn MCE off on boot so I had to boot from a live USB, chroot in, modify /etc/defaults/grub and reinstall grub.

Does the TR MCE bug exist for 1st or 2nd generation Threadripper? What is it exactly?

Just for Gen3. Details here on the patch AMD submitted for the kernel:
https://lore.kernel.org/patchwork/patch/1156999/

Has not been picked up yet for Linux 5.6.

In other news. I have a few free hours this evening so I’m continuing my build. Replacing my Corsair ML120 fans with InWin Crown AC120s. Got six fans working daisy-chained from a single motherboard fan header and the onboard RGB on the Zenith II.
Tidies up the cabling a heck of lot. I bought four twin fan kits (because there are some reports of DoA InWin Crowns… and I was importing them from the US), but still ended up missing one short daisy chaining cable for the six fan daisy chain. 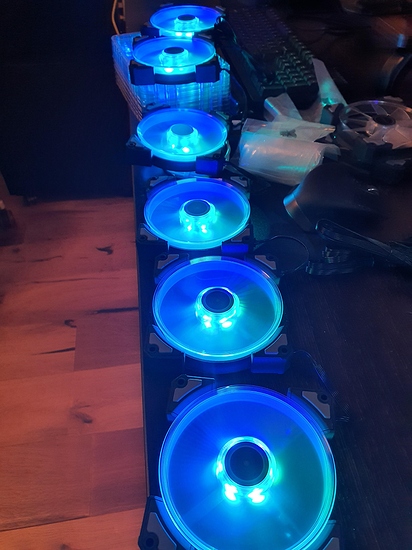 Also managed to get an OEM to send me some DDR4-3200 ECC UDIMM engineering samples… It’s CAS22 but should have them before the end of January.

what the hell. you lucky dog… how much did you have to suck up for that, or do you know someone who knows someone?

I work for a company with an existing relationship with the OEM. They’re doing us a favor by forwarding us early engineering samples for a non-production project (we’re switching some of the mechanical engineering workstations to Threadripper) in hope of future contracts for production volumes of other products. And work is doing me a favor by letting me buy some of the modules at cost.

Also if anyone knows of a suitable desktop 2.1 amp for a system like this with two additional SPDIF inputs (for laptop and sonos). I currently use a Teac Al-101DA which is dying…

You should probably make a separate thread for this (or ask for split).
Anyway,

For Multiple Spdif, I would just get a Spdif switcher and that would really open up your options.

As for things with a separate subwoofer out, thats also something that can be annoying to find on small devices.

You could of course just go full size AV receiver but I tend to never like that option, myself. I’m the kind of person to go for a miniDSP into multiple discrete amps (Crown, QSC… get that Behringer iNuke crap outa here.)
Actually I think if you had the kind of powered subwoofer that expects a pre low pass filtered low level input (thats what “sub out” usually is) as opposed to one with its own variable crossover that passes back a high pass filtered signal to the full range (third option being unpowered like I’m describing where it’s just a cabinet with no electrics and you power using a discrete amp), miniDSP is still an option. Just use half of one of the miniDSP channels as sub out. But miniDSP is not an amp, you would still need something for the full range. Could combine that with a small desk amp like a Lepai 2020 or a SMSL, Dayton Audio…

Speaking of SMSL and Dayton though, those are two of the only few I can think of that still make a mini amp with a sub out. Specifically SMSL Q5, Dayton WF150A, Dayton DTA, Topping MX3 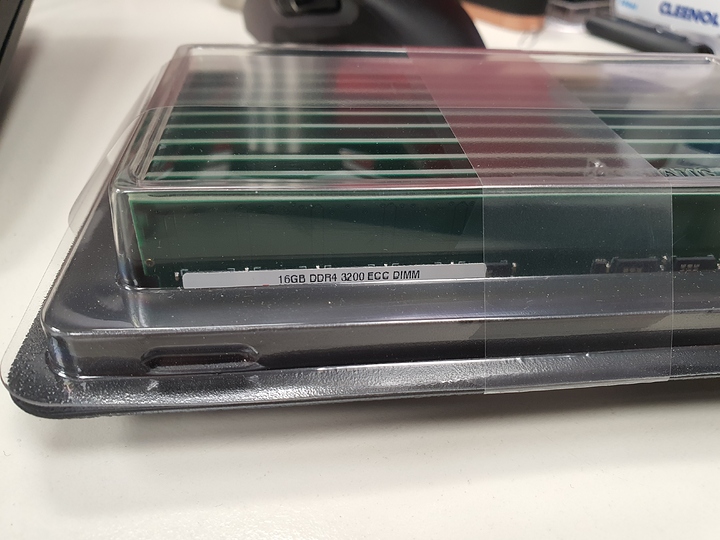 Just finished another minor update of this system.

Added a pair of 8TB Sabrent Rocket Q to the DIMM.2 in software RAID 0 and dumped all the spinning rust. Also exchanged the MX Master 2 for an MX Master 3.
Going to swap the 2080Ti for a 3090 as soon as ordering goes up as well.
Also have an Icegiant threadripper cooler on the way from an early pre-order. Pump noise from the Coolermaster Masterliquid is really noticeable and I like to get rid of it.

Now that the HDDs are out of the picture and with the threadripper upgrade meaning I no longer need to accommodate the massive dual-socket board I’m thinking of maybe changing the case as well.
Any suggestions?

Would need to be a case with three 5.25 bays for the ODD, tape drive and hot swap HDD bay.

Just finished another minor rebuild of this system.

Much cleaner looking build and I reclaimed a bit of floor space from that monstrous Thermaltake Core X5.

Pump noise turned out to be due to the pump being just above the radiator in the Core X5… so trapped air in the AIO.