Mine are... not great. @wendell back be up man. This trailer makes me sad. Maybe the writing will be good...

Why the fuck is there so much lens flare? Where is the "Discovery" part? I don't have high hopes for this show. Originally slated to leave drydock in May of this year, Star Trek: Discovery suffered major setbacks and delays. But with filming currently underway, when can we expect it on our TV screens?

UPDATED 2/11/17
There have been some new developments over the last 6 months. Production has started and we got our 1st look at the new uniforms, captain's chair, and now... Klingons?

I dunno how you guys feel, but this Klingons don't look very Klingony to me. I have a bad feeling about this show. 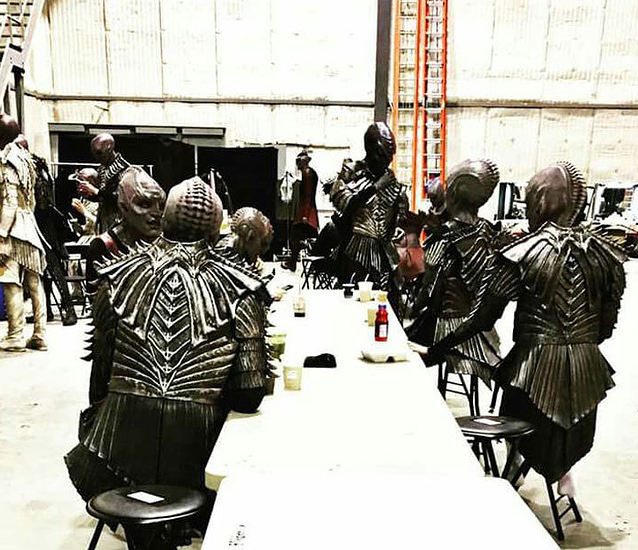 UPDATED 7/23/16
New stuff! My hopes are officially up now. This might just be awesome.

From i09 about unveiling at San Diego comic-con

"There wasn’t a lot of details to be had, but showrunner Bryan Fuller knew exactly what to say to make Trek fans excited. “What the new series has to do is continue to be progressive, [to] push boundaries and tell stories in the legacy Gene Roddenberry promised, giving us hope for the future,” said Fuller, who also confirmed that the show would be serialized, and will premiere on CBS All Access in January 2017."

Fuller put to rest the speculation about which universe the show was set in, saying “It is in the prime timeline.” He couldn’t say exactly when in the timeline would be set, however.

“I don’t think we’re supposed to say yet because there areso many new things about this series,” Fuller said. that “There’s a lot of new and exciting things we’re doing with this show, that we [don’t] want to [over]saturate you.”

UPDATED 5/18/16
New teaser trailer. Doesn't show you (to tell you) much, but I'd be lying if I didn't get a little bit excited. The style looks very Nu-Trek... so I'm still pretty worried about what direction they end up going in.

UPDATED 4/25/16
New Star Trek series set to start filming in Toronto this September! No other news really, except that this article used the word "reboot" which I'd take with a grain of salt. But it's possible they actually reboot the series... I just hope thy don't.

Pop Goes The News — Production of the new Star Trek series for CBS will beam down into Toronto this fall. Studio space, beginning in September, has been booked for the first Star Trek series …

For all your hero and sci-fi related news!


Eugene ‘Rod’ Roddenberry, (Gene Roddenberry's son) is now involved in this show. This might not mean much, but what I know of Rod Roddenberry is that when they were filming TNG he was just a kid and not really even interested in the series as it was "Just his dad's job". You could probably understand where he's coming from. However, after Gene died, and Rod became and adult, Rod looked into his dad's legacy and learned a lot and grew to greatly appreciate what Gene left behind.

So... if nothing else, this news to me says, the studio is trying to make it right... at least I hope that's what it means.

UPDATED 2/26/16
Looks like they have picked up Nicholas Meyer (Director of Wrath of Khan & Undiscovered country) as a consulting producer/writer.
http://www.polygon.com/2016/2/26/11121684/star-trek-cbs-tv-series-nicholas-meyer)

I like this because in my opinion his two movies are similar in tone to DS9 which is my personal favorite ST series. That said, Gene Roddenberry wasn't a fan of Meyers take on ST as it was less optimistic and more militaristic. Thats ok to me as long as the heart is still there, and I think Meyer understands that.

Pretty exciting news in all honesty if you ask me.


Not sold yet... this guy mainly worked on ST: Voyager, which isn't saying much in my opinion. But he appears to be passionate about Star Trek, so fingers crossed!

"...we’re excited to launch [Star Trek's] next television chapter in the creative mind and skilled hands of Alex Kurtzman, someone who knows this world and its audience intimately.”

Alex Kurtzman, Co-Writer and Producer of the Blockbuster Films
“Star Trek” and “Star Trek Into Darkness,” to Executive Produce.

The new television series is not related to the upcoming feature film “Star Trek Beyond,” which is scheduled to be distributed by Paramount Pictures in summer 2016.

Yeah we need some more information. And because this is a TV series I imagine we won't get a whole lot of news until much sooner to 2017.

Someone on reddit said the following and I can't help but think he is 100% right.

Jesus... If it turned out like that... pure Armageddon.
if it's anything like the recent Hollywood movies I'm not going to watch it. I know that Alex Kurtzman co-wrote the recent films, but he also produced Fringe - and that gives me some shred of hope.

What ? They can't create something original.

What ? They can't create something original.

Abrams Trek isn't Star Trek. But that's just my opinion. It's nothing to do with the universe not being fleshed out or expanded at all. The new movies just missed the point of Star Trek all together.

You'd think Paramount would have learned its lesson after Star Trek: Nemesis. Apparently not. If you bring in someone that doesn't know a damn thing about the franchise, then they won't make anything faithful to the essence of Star Trek.

I agree, but the people who own the rights to Star Trek see only dollar signs. To them it's just a franchise with potential to make a profit. All the folks who cared about the heart of Star Trek are gone. Roddenberry is gone, Majel Barrett is gone, and the actors are either dead or out of work, or their last name is Shatner in which case they are incapable of caring about anyone but themselves (hiyooo!).

If CBS thinks they can make more money appealing to a newer and wider audience by trading in it's humanist message for more laser pew pew action and sex, then it will. I feel like our best hope is for a new series that does both. One that draws in the newer fans and sneaking in the traditional story telling of the original shows. That's why as fans we have to be vocal and make sure CBS knows that Star Trek is more than just a TV Show with space ships and aliens. Star Trek is about us, who we were, are, and could be.

Sorry I got a little ranty.

hm, wat timeline is this?

Had to play the Winning track from Zweihander after reading that. :P

Honestly after having thought about it more and more I think this might be the project that could not only wreck the franchise but also put a HUGE dent in Paramount/CBS. While I'll watch the movies because on certain levels I enjoy them, I'm also mainly just watching them because of my loyalty to the franchise (that being said, I freely confess I'm a huge fan of the design for the USS Vengeance). With the smaller screen the creators will have to make a show that retains that loyalty but more importantly captivates the audience to the same extent as the previous TV series. Enterprise failed this and the showed died off, which is unfortunate because I think there was potential there that was untapped.

If they bring in writers and directors that are experienced with Star Trek like Jonathan Frakes, Levar Burton, and Roxanne Dawson (I'm probably forgetting someone) then at least the show has a shot. Good actors will be needed too but even great actors have to be directed so both are needed.

The last thing that needs to be hashed out now is whether they're going to reboot one of the previous shows or start a new one. If they reboot something then I'll watch the pilot and maybe the first few episodes. If it doesn't grab me, I'm out. End of line. If they create something new, preferably post-NextGen era, then I'll likely give it more of a chance. Given that Enterprise had such a hard time going back in time relative to the preceding shows, I'm more inclined to believe that going forward in the timeline will have a better result ... relatively speaking.

I really just want soemthing like TNG or DS9 I jsut couldent stand something set in JJ's universe for an entire TV series. I can build up enough suspension of disbelief and disconnect myself from the Star Trek universe enough to appreciate the movies but a whole TV series would just be unwatchable. I REALLY hope they go for something more like Anaxar if we are talking about recent star trek efforts. Gravitas not action, complicated themes not sex with green aliens, SCIENCE, SCIENCE, SCIENCE!

If I see one blue lens flare I'm out.

It is sad but most likely true.

I do hope they don't just play to the so called safe bet's in order to get better initial views.
What made the older shows good was the slow start, buildup and consequence between episodes.

Not only that but they are going to put it on their "netflix/hulu" like service. So you have to pay an additional monthly fee for the privilege of this pain. Just no. (calls Ministry of Stop It!) The show is DOA on that aspect alone. There hasn't been a "good" Star Trek since TNG...Voyager was just OK....don't even get me started on Enterprise...

Basically this will be terrible and as much as I want Star Trek back on TV...this is not the form I want it in...

Personally my favorite series is DS9, and thought Enterprise was much better than Voyager. My point being, we all have different opinions on the series, but I feel we can all agree that while spin off 'X' is better than spin off 'Z', they all still had the underlying tone and message that Star Trek is known for and the Abrams Trek Universe just does not.

That is my only concern. I will give any Trek show a chance, as long as it's actually Star Trek and not Pew Pew Boobies iTrek.