Undervolting and cie: Unlocking the potential of XPS 13 9365

First stop: Underclocking
I’ve begun first by underclocking the measly core i5-7y75 to see what kind of performance bump I could get. I was able to get a stable underclock of -0.085V on the Core Voltage (-0.090V ended in a bluescreen after almost 30min of stress test). With that kind of underclock, I was able to get a bump from a mean frequency of 2.0 GHz to 2.25GHz, with the same core temp of 70C. I found quite impressive for such a small tweak, and the laptop do feel smoother, with less hiccups there and there. 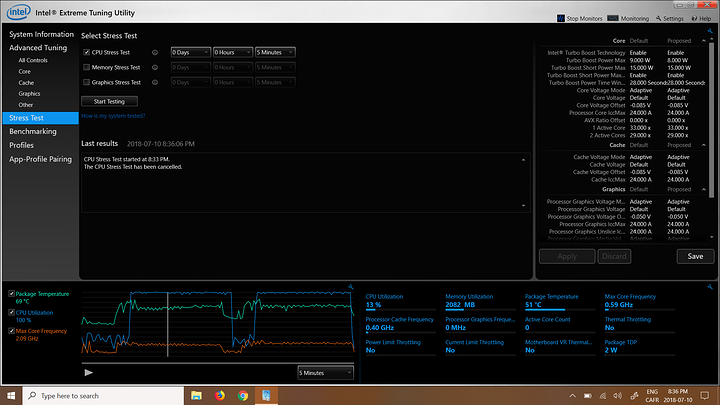 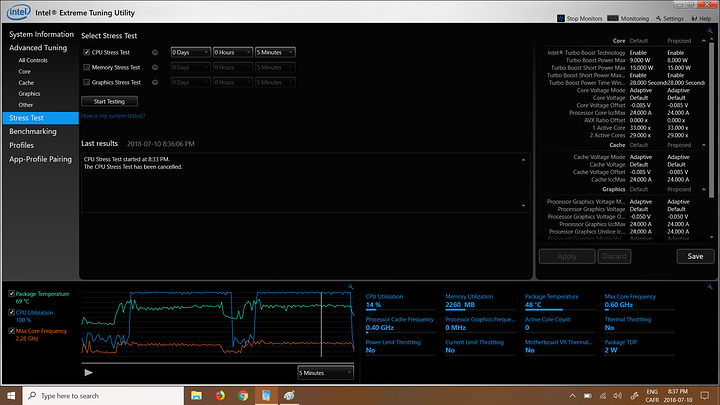 Next stop: Amped passive-cooling
Obviously, the passive nature of the laptop is what limits it the most. So what I will do next is to apply a thermally conductive compound between the SoC heatsink and the base of the laptop (after I will a T5 screwdriver). It doesn’t seem that there is any thermal interface between the copper heatsink and the base, so I guess the thermal dissipation is intended to be done by the air surrounding the SoC to the base. 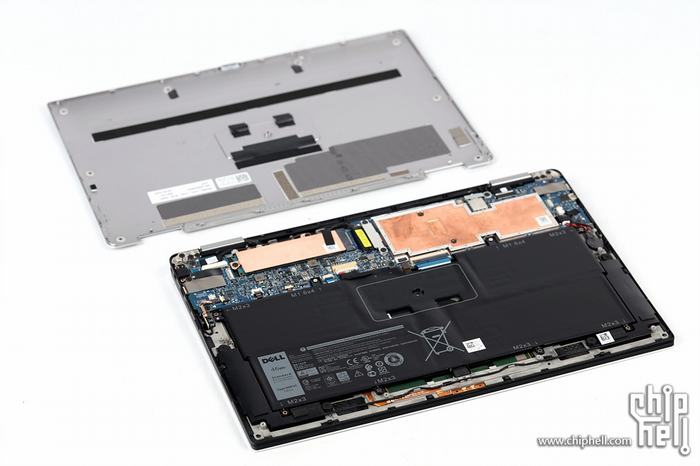 I hope that by connecting the SoC heatsink with the base of the laptop I gonna have better thermal dissipation and squeeze some more performance.

Amped passive-cooling: Proof of concept
Well I discovered there was a T5 bit laying around the house so I put my plan into action. I opened the laptop and applied some leftover thermal paste I had laying around as a proof of concept and it works. Even with the small quantity of thermal paste I applied, the laptop now hovers around 2.45GHz during the stress test at a temp of around 68C and turbo boost very frequently.

So now I have to buy thermal pads to have a proper installation, or am I better off to use thermal paste in this situation as it seems to have good contact with the base of the laptop? 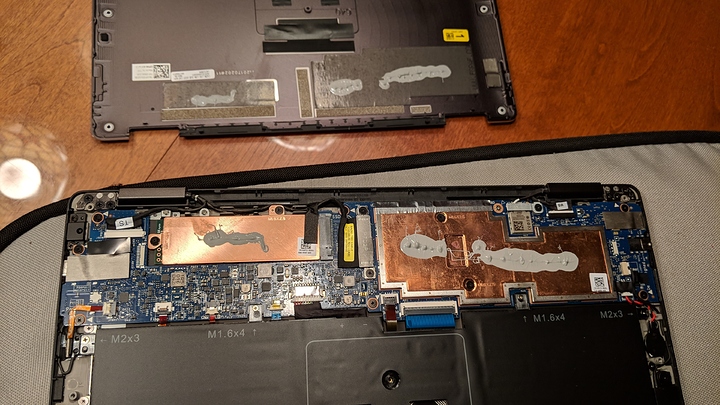 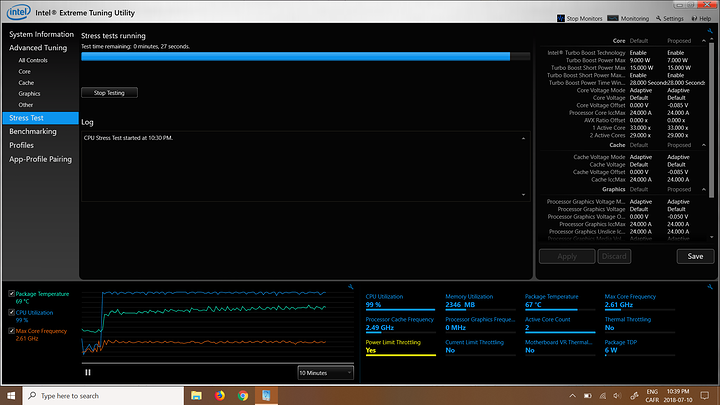 Did you remove the IHS and put new thermal paste on the die?

Did you remove the IHS and put new thermal paste on the die?

nah I didn’t. Just had basic leftover thermal paste on hands plus I don’t think it will affect as much performance, as the bottleneck for heat dissipation is between the heatsink and the base of the laptop.

You should definitely try it, the stuff they use can be total crap.

Finally I put thermal pads. I didn’t replaced the thermal compound of the IHS because the heatsink looks flimsy and I’m not at ease to remove it to put new thermal paste there. Underclocking have been reduced to -0.075V on CPU because -0.085V and -0.080V was shutting down the laptop when it went to sleep.

The result is a CPU that hovers between 2.25GHz at 69C compared to the small application of thermal paste which gave 2.45GHz at 69C. So ya thermal pads are kinda acting as an insulator here. For anybody else doing this I would recommend going with the thermal paste or really high-grades thermal pads.

For the time being I will let the thermal pads there. It still solves my problem of lagginess, especially using my MX Master with bluetooth which do not have hiccups anymore. 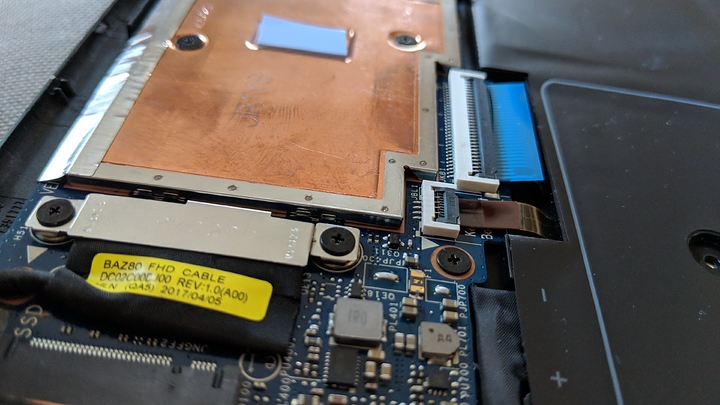 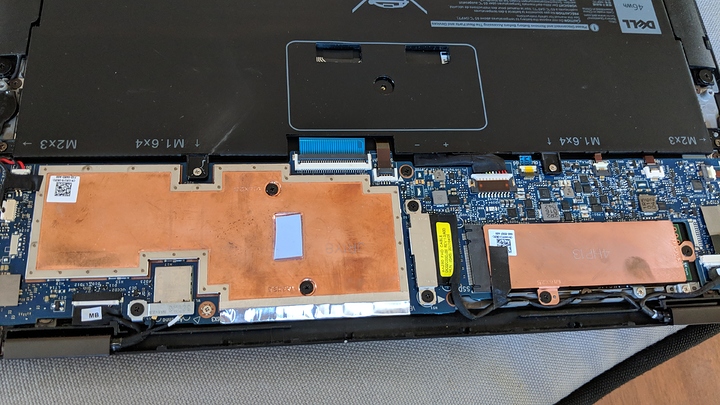 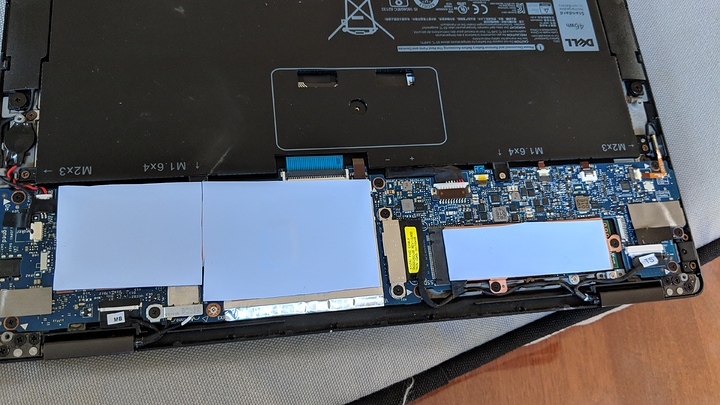 From what I understand, youre actually undervolting; not underclocking.

oh ya oups my bad

Excellent thread! Thanks for putting this together.

I recently applied thermal pad similar to what you did, but had issue that the back cover does not clasp properly near where the thermal pads are installed, ie there is a space between the back cover and the body of the laptop between the two hinges. What thickness thermal pad did you use? I used 1.5mm. I am thinking of trying thinner pad, but unsure whether to use 0.5 or 1 mm.

Thanks in advance for the help.

I’m using 1mm thermal pads and it’s all fine. A little bit difficult to clasp but everything fits, there is no gap. But I think 0.5 would work also if thermal paste was working also.

And also just to warn you with the mod the bottom of the laptop can become hot, but at least no hiccup, even without undervolting. In my case I scrap the undervolting because when it was undervolted, the laptop while often shut down when going to sleep and erasing any undervolting.

Thanks. I had same issue with undervolting. Will try 0.5mm, as it seems like the heatsink does contact the bottom cover but not optimally.

** UPDATE 2018-11-02 ** I had applied the 0.5mm Artic thermal pad about 1 week ago. Since then I have experience little to no throttling when connected to my TB16 dock. Bottom of the laptop gets quite warm, but clearly this means that the solution is working! I also applied thermal pad to the SSD heat sink as well. 0.5mm pad seems to work well; however, I did not test 1mm, which may allow better contact between the CPU heatsink and the curved bottom panel of the XPS 9365 2in1.