I’ve just picked up a Dell Poweredge R320 on eBay with the intention of running FreeNAS virtualised under Proxmox. To this end, I was looking to flash the PERC H710 RAID controller to IT mode per Fohdeesha’s guide from the Homelab subreddit. Unfortunately when I go to boot his FreeDOS image as virtual media through iDRAC, I’m unable to do so and receive the message “Please ensure compatible bootable media is available.”

I don’t think the problem is with either my hardware or Fohdeesha’s images. I’m able to boot to the Debian ISO included with his package just fine as well as that for Proxmox by the same method. A regular install of FreeDOS from the Freedos org also causes the error though. My server isn’t throwing any unexpected errors in its logs - there is one for the PERC battery, though this is to be expected as I unplugged it in accordance with the guide.

I’ve tried mounting the image to a thumb drive with RUFUS (as dd) and booting that directly, but this also proved unsuccessful.

The only other thing I can think of is that I don’t have any hard drives plugged into the server as of yet since they’re still in the post. Not sure whether this is important, but thought I should mention it.

Now just wondering if there’s anything else obvious which I may have missed, as I’m quite new to the whole homelab thing. 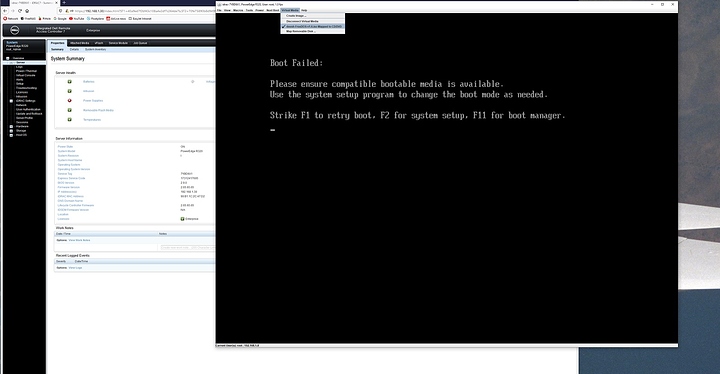 I think that server is new enough for UEFI, but I don’t think FreeDOS supports UEFI boot, so make sure that BIOS/CSM mode/legacy boot is enabled in the UEFI settings.

Many thanks, problem solved. I was failing to appreciate that the NIC which showed up under the BIOS boot order was in fact my iDRAC virtual media. I feel a bit silly for how long I’ve spent trouble shooting this