Quite recently, Ubuntu finally published it’s statistics regarding the telemetry it gathered on new installs. The results are very very interesting. More people doing things than I thought! And more actually participating than I thought! Kinda excited about this:

It’s valuable info for companies like Canonical (in this example), it’s all opt-in and the data they gather isn’t even a privacy issue.

Wow, really surprised by the X11 stat and the one monitor stat.

it’s all opt-in and the data they gather isn’t even a privacy issue.

These are vital points that need to be constantly reinforced. The narrative at the moment is that all telemetry is bad and that is simply untrue.

I was surprised by the X11 stat too. But considering it’s default for 18.04, that doesn’t surprise me too much. They abandoned wayland as far as I know.

The single monitor stat was definitely a loop for me. Considering I only ever see multiple monitor setups for Linux online. Especially on the forums here.

Normally I would be using dual monitors, cause it suits my workflow, but no room atm.

What surprises me the most is that, with the exception of Australia, Ubuntu use isn’t very high in predominantly English-speaking countries.

The 800x600 resolution is kinda surprising, though… I wonder if that’s because of the number of server installs. A VM without GPU acceleration would probably trigger that pretty often.

Mostly, this confirms that the folks who use Ubuntu use Linux very differently than I do.

Abandoned? Nah, default? Yes.
But anywho yeah telemetry has a bad vibe to it but at least Canonical is being transparent about it.
If they weren’t, at least the users have full control of their system.

Maybe I missed the distinction in my cursory glance, but if their “desktop” category includes laptop form factors that may heavily skew the single display metric.

Interesting! Quite a few surprising results (to me). 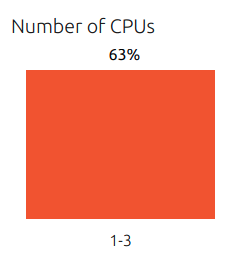