On an Ubuntu 16.04 install with a ton of hard drives, I am having a big issue.

I have a dataset I like to encrypt and copy to each hard drive every now and then.

The home folder is encrypted because I wanted to prevent the information being stolen if someone were to steal the drive.

So something really annoying happened.

For some reason the .Private folder has grown to 300gb. Which means I don’t leave me enough space for some operations. So what the heck.

I read it could’ve been caused by the trash not been cleaned, and I also deleted the contents of a .Trash folder. So far neither has worked.

So for reference, the drive is 500gb.
And right now I have 100gb of data. Why is there a 300gb .Private folder, when there is no Private (non-hidden) folder.

I read it could’ve been caused by the trash not been cleaned, and I also deleted the contents of a .Trash folder. So far neither has worked.

Not sure why you are trying to delete the trash manually. Just open the file manager, right click on the trash and then “Empty Trash”.

I am desperate. My disk is full. I can’t figure out whats wrong. At this point, it’s literally at 100%. But all there is, is my data and the daggum hidden Private folder. Which is clearly a lot more than my data.

Are you saying you can’t find the trash? This is what you’re looking for 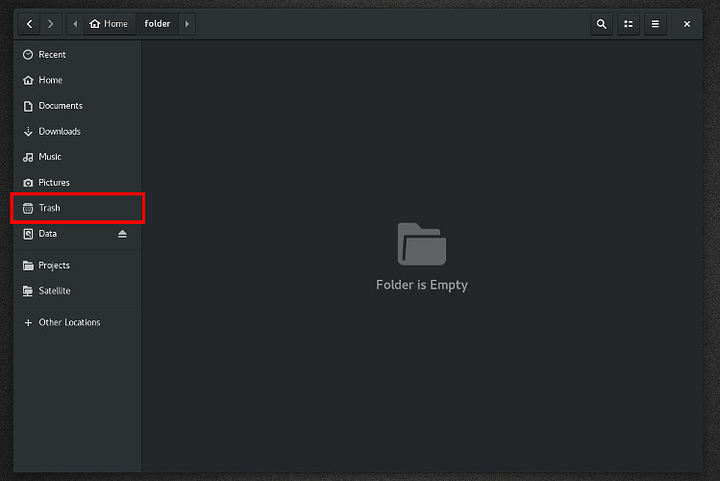 I can totally empty my trash folder normally, the hidden trash folder seemed to be a way to fix this issue but it didn’t work for me. Basically my issue right now is that my this folder /.Private has 300gb. And it keeps growing. So I don’t know what to do. I think I have to put my data somewhere else, delete the folder, and see what happens. It doesn’t seem to be a lot of info about this on the internet.

What if you check what’s actually taking up the space to troubleshoot further? cd to .Private and ‘du -kxcsh *’

DO NOT DELETE IT!

i thought ~/.Private only stored encrypted was was stored in ~/Private?

encrypted home is supposed to encrypt the entire directory, different from ~/Private.

Last time i used it, some years ago, the crypted folder was .Private, no matter if you used Private or /home/user.

@pabloe168 is using it for home and didn’t specify ~/.Private, only .Private.

To make it easier to understand:

You may see 100GB in your home and 100GB in .Private. This does not mean that you have 200GB used, but only 100GB. As the .Private folder is what is actually on your disk. The 100GB “unencrypted” data is not save on your storage device and file system, it is only decrypted on the fly.

I am waiting to back up my data on a large flash drive so I’ll post it when I can finally manage to get any information out.

Here is the info I got from prodding around. I don’t think its useful. But at least it shows that .Private has far more space used than my whole folder combined.

However, from dh -h this is all I get

So I went in .Private

I am starting to find people with the exact same issue

Ok I managed to solve this. It was doing something very dumb. For some reason, out of nowhere the .Private folder was also adding files from mounted drives in my system at random.

I think this is also happening to me. Can you describe what you did to correct the problem?

OP was last seen in Jan. I don’t know if he will come back.

We could see tho. If not it would be best to open your own thread.

If you do create your own thread please be sure to include OS version and kernel version.

Do you have mounted drives? The issue was that I had a mounted drive with lots of data. That data was being encrypted and being added to the .private folder such that the drive was encrypted as well. This of course is not intended since I only wanted to have the home folder encrypted in case someone steals the hardware. I am not sure what fixed it, I just deleted lots of data and remounted the drive. Maybe try not mounting anything inside the home folder.

I’ve got some docker processes that mount drives in home, so I think they are being added to ~/.Private. I’m not sure how to remove them from ~/.Private after I’m done using them.

I had the same problem recently. It seems it was related to Docker containers. I found the following command which worked great.
docker ps -a --filter status=exited --quiet | xargs docker rm