i was on reddit and saw a post claiming that user accounts at ubisoft had been closed with $$$ of games just gone…
ubisoft are saying nothing other than they have no records of said account. although the guy shows them he’s logged into it.

so i decided to look at my account and low and behold. i have 3 games out of the dozens i once had.
everthing from tombraider games,
hawx 1-2
far cry
the entire assasins creed
and some free coz your a member games.

they left assasins creed 4 with its dlc and the crew

so check your ubi account guys. coz this aint cool and my next step is waiting for a reply from them myself

My games are all in place. But I haven’t ever bought any of them.
I have only freebies from Ubi and Valhalla added with a promo CD-Key.

The only way to win is to delete your Ubisoft Accounts and not play their game.

I’m glad I deleted my account in 2019. To be honest, I kinda miss The Division. I’m still boycotting them after Jim Sterling made me angry about them

. But to be fair, they’re a shit company along with EA and ActiBlizz.

Gods it better not be.

They’ve got actual security IT funding. Their only problem is if the coin counters decided to keep the server up even if the security guys told them to temporarily turn off the servers to keep the money flowing.

They’ve got actual security IT funding.

That is why i buy my games on steam. so there is more of a record. also valve is one of the few non shitty game devs+publishers. Does steam host their own downloads of games, or do they connect to the library of other game developers and their servers?

So the web version only showed four games, but when I logged into the desktop client, they are all there.

lol. steam was bearly a thing 14 years ago when i set both steam and ubi accounts up.
but yeah steam has been the more consistent of the 2 services.

Interesting. I have not yet gotten home to check myself yet, good catch.

Does steam host their own downloads of games

From what I’ve seen, Steam host all games that aren’t run through a launcher.

[edit, I’m sure I heard this, but can’t see any corroboration, internet video as a whole is much larger, and internet usage on mobile is Huge…] Which means the generate a Lot of internet traffic, behind Google and Netflix, they are one of the Big Bois

uplay? no but my ubi account is 14 years old… 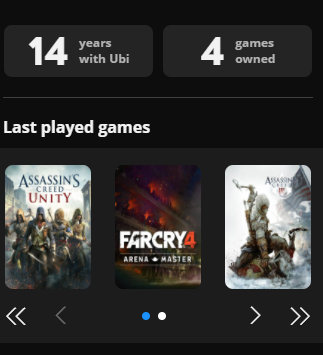 oddly 1 more game has shown up a far cry expansion pack O.o
so im guessing this is a library database error rather than a malicious attempt at clearing old accounts. (for now)

Yeah steam self host with akami for CDN. Valve in general have a habit of keeping all versions previous of all games and files where legally possible available.

Apparently their development servers are a messof just piles of unsorted unused content form.several games and several more that were never finished.

well its deffo been a bug in part for me.
i dunno if its coincidence that i logged in while they migrated my databases, but i just logged in and i now have 14 games.

still missing is the tomb raider trilogy and a couple of assassins creed games.

I never liked using uplay/ubisoft connect and have actively boycotted them since I heard about the abuse situation over there so I don’t have many games, but those I do have are all still there.