Not sure if there's a discussion thread about the recent silencing of VODs yet, so I'm making one. What are your thoughts on it? 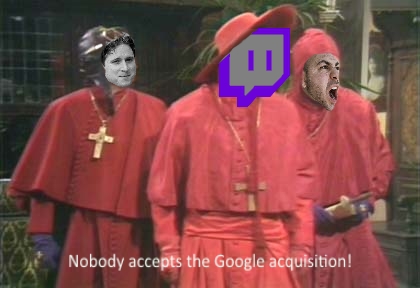 That Twitch is so big that they really don't have a choice.

The problem is how the law works, not Twitch or Google buying Twitch.

The problem I've encountered isn't the fact that VODs are muted, that's unavoidable, performing rights are older than the DMCA. The problem is how broken the system that checks for infringement is.

I just watched an hour long VOD of a CSGO match where half of it was muted, and yet it contained no music, aside from the very beginning.

I wouldn't be surprised if some bigger streams bought blanket licenses. I believe Twitch could do the same, and should, especially considering the funding they now (allegedly) have, but they most likely won't.

The only thing that changes is people don't watch vods on twitch anymore. They are dumping old ones anyway because they aren't seeming interested in becoming a storage site. As far as the music goes you can circumvent it if you have a capture card or software. Just grab vac and put your music on a separate audio channel so your capture card doesn't record it. Voila! you can upload your non infringing vod to youtube.

If they start muting livestreams then you have to exchange music with others in a different way. It's not difficult to share playlists with others. Quite a few streamers don't even bother with music anyway. I guess it boils down to what type of streamer you are or want to be? I say this is inevitable at some point that they become like youtube livestreams.