I recently started foolin around with an old server in my lab. I’m looking to see if my performance numbers are out-of-whack because they seem low to me. I’ve built a poor-man’s all flash array using the following 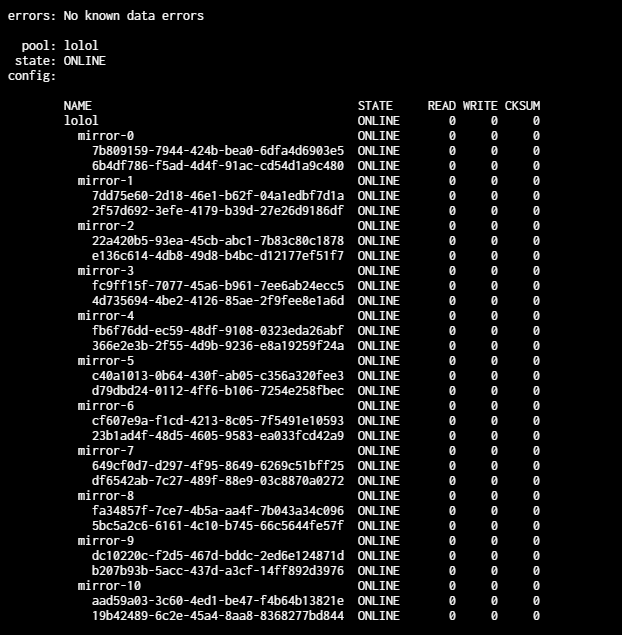 A ZVOL Mounted via ISCSI on Windows over a 10gigabit network: 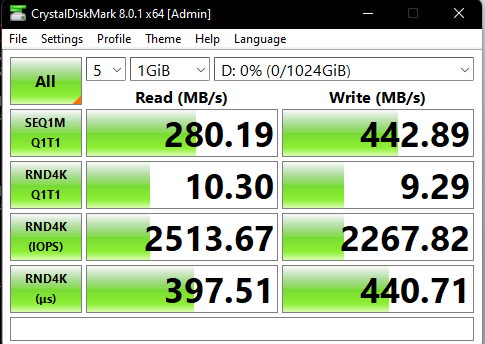 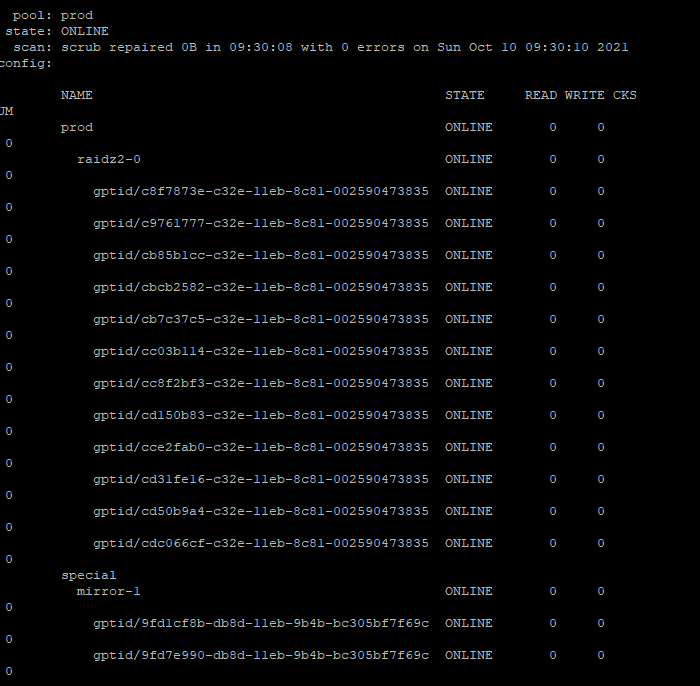 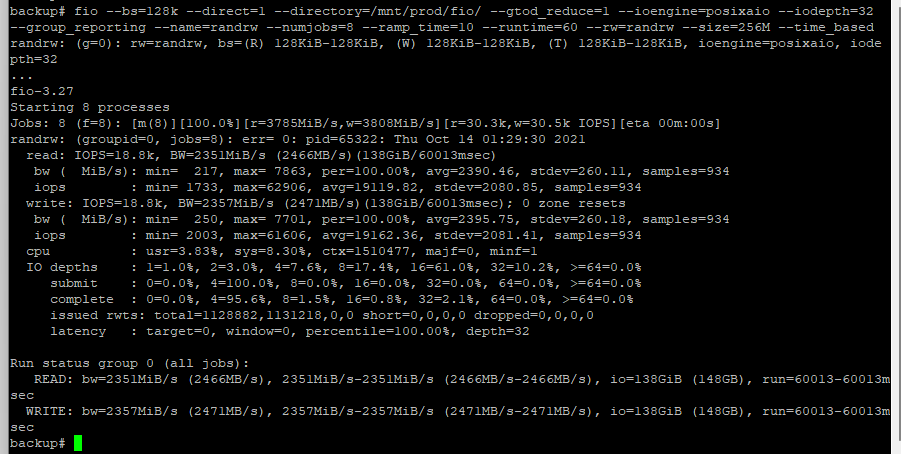 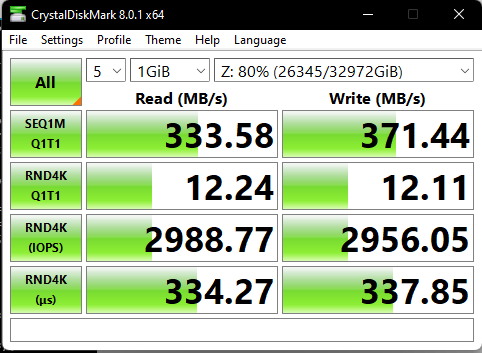 I’m going to try and re-do the testing with some 9205-IT mode cards, but since my system is PCI-E 2.0 I’m not sure if it will have an appreciable benefit. SAS2308 is generally better than SAS2008 chips in any case. But still, I was expecting closer to 3500 MB/s…at least inline with modern M.2 performance…with 3 separate 2008 controllers and 24 drives with no SAS expander I’m not sure why that’s not possible??

I can also try and swap the drives for some old 180GB Intel SSD 520s I have to see if that changes anything. The CT120BX500SSD1 SSDs I have are DRAM-less and any efficiency increase with more modern NAND vs the old 520s is probably lost to that. Worth experimenting, I wish I had a 3rd set of drives to compare against but that’s all I have to play with.

Any other thoughts are appreciated, I know this is all older hardware but I’m not sure what the biggest bottleneck is…This should be significantly faster than 12 spinning disks in a Raid-Z2 by the nature of the fact that they in a mirrors pool and they are SSDs…?

So I did the SSD swapout to the SSD Intel 520s

I know these are really old Sandforce drives, so I wasn’t sure what to expect here. Still, performance seems rather low… 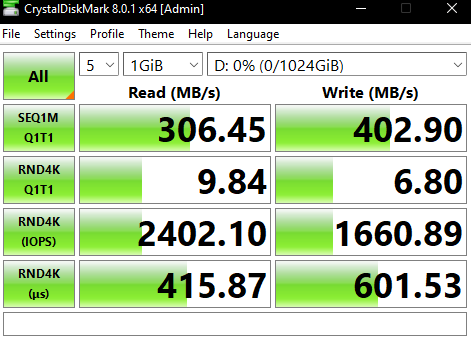 I will try and swap in the LSI 9205s tomorrow. Any other ideas are appreciated. 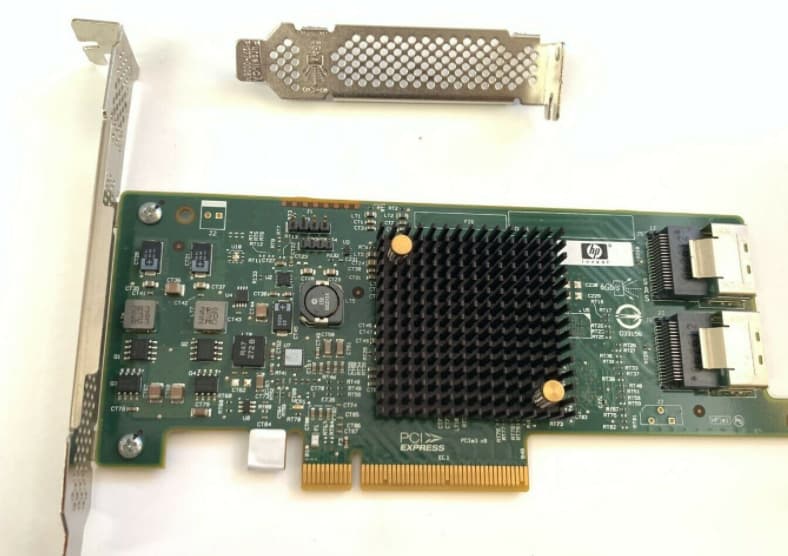 Less than with the Crucial drives, faster than 9211s.

Won the action for the LGA-2011 board. Will test with the E5-2620s that it came with (the same CPUs that are in my production server). 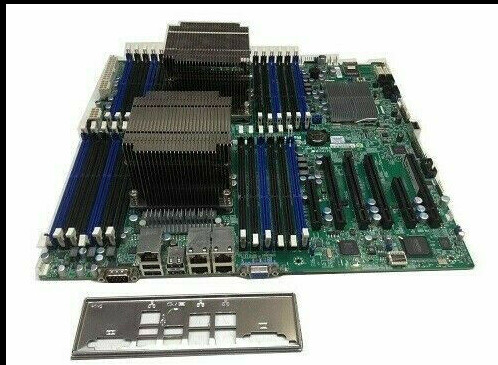 RAM is the same exact DIMMS as are in my production server. Experiment is on hold until that comes. If it’s not significantly faster with the new board I’m sorta at a loss??

Is my testing methodology not correct?

This is not my territory, so I may be totally barking up the wrong tree, but… I see your “slow” system is using many SSDs. Are you aware of Wendell’s video and post re slow I/O performance with many NVME SSDs?
https://forum.level1techs.com/t/fixing-slow-nvme-raid-performance-on-epyc/151909

To be sure, the circumstances were different, but as I understood it the root cause had to do with getting so many I/O interrupts so fast that the Linux kernel tripped over its own feet. Wendell says the Linux kernel has since been fixed, but something similar might be affecting your BSD system.

Hey man,
Those types of issues shouldn’t crop up on SATA SSDs, that level of insanity needs faster NVME drives for the kernel to be a problem. 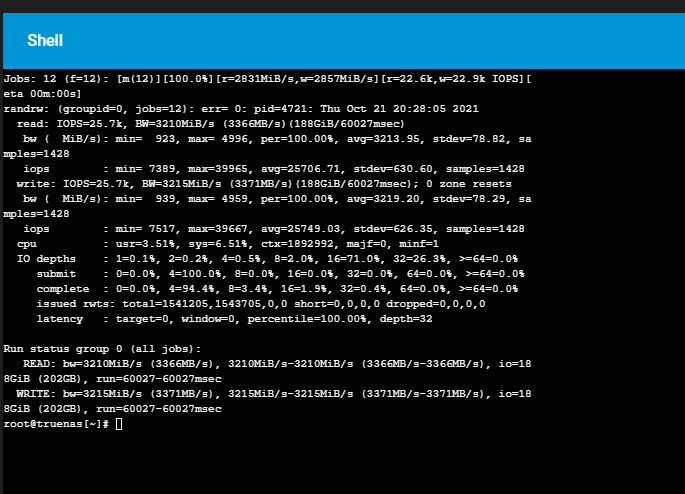 I think I will pickup some faster single threaded CPUs next and see what benefit that gives me. 2620s don’t exactly scream, and the X5680s I had in the other board are probably faster. It’s kinda silly, because over ISCSI it’s still only a little faster than a single SATA SSD… 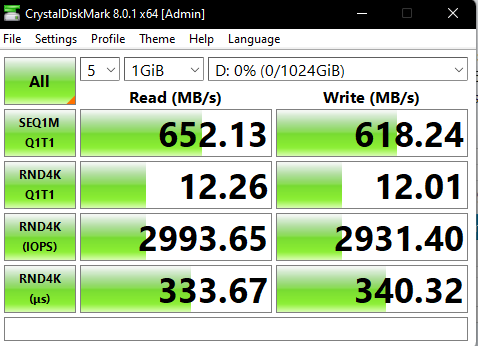 Congratulations on the doubling of performance! Thanks for sharing your experience. 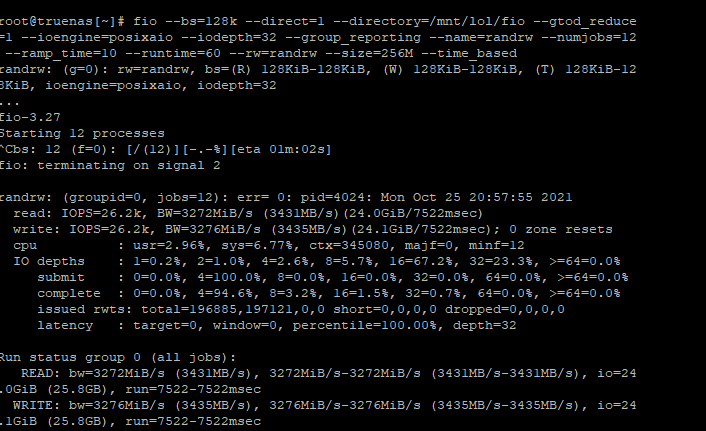 To be clear, it does seem to be scaling linearly, so maybe this is as fast as these drives go?

This is a single drive: 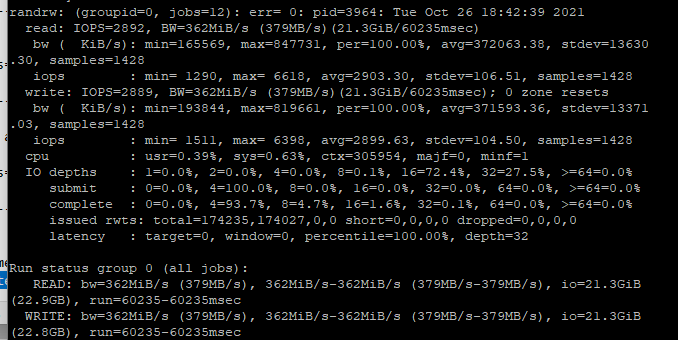 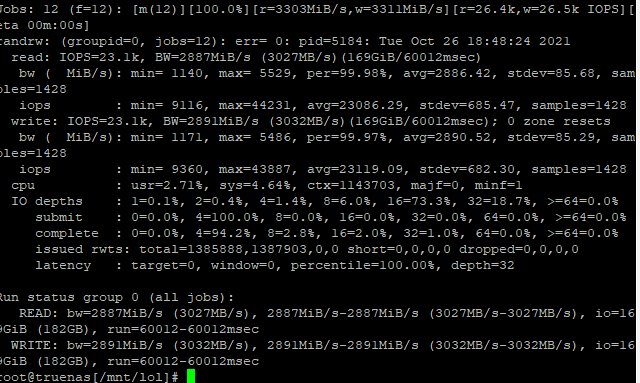 Performance is pretty close to mirrors, which goes against conventional wisdom I’ve seen here. It was always my understanding that mirrors had a high cost in storage efficiency but were always faster than RAIDZ. Although, we are talking about 22 drives and only a single drive worth of parity…not exactly production ready. 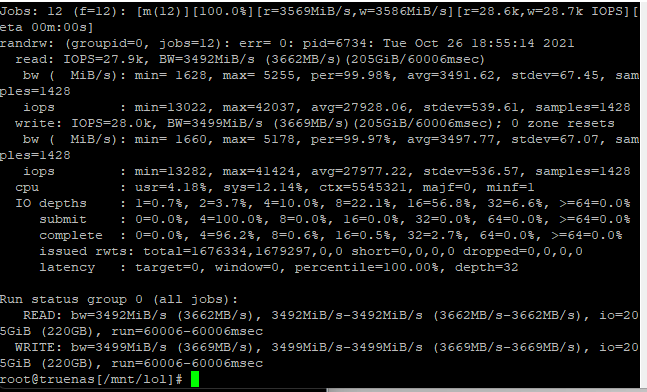 Still, not sure if I would put into production 1 drive of parity with 11 disks. 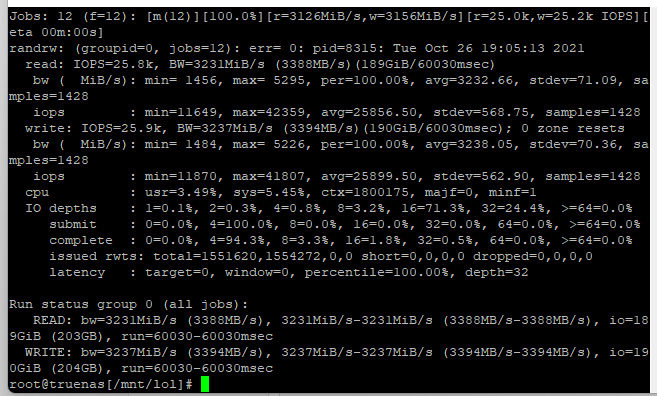 Losing 2 drives as “hot spares” plus 3 for parity for a total of 5 drives is still better storage efficiency than the mirrors(which lost 11), and still faster.

Finally, I made an 11-drive-per-vdev RAIDZ-2 of 2 VDEVs. This offers better storage efficiency than the 3 RAIDZ-1 VDEV arrangement. 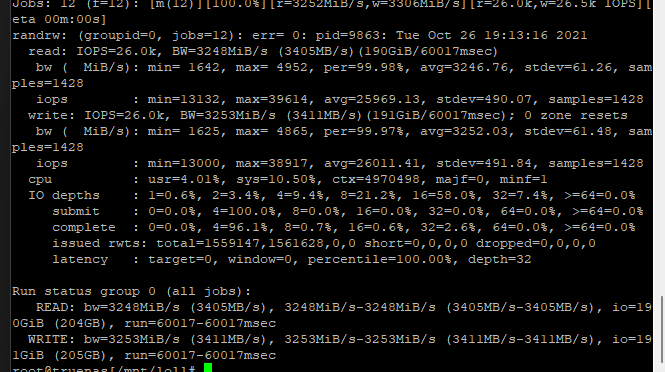 I hope this helps someone later…

Performance is pretty close to mirrors, which goes against conventional wisdom I’ve seen here. It was always my understanding that mirrors had a high cost in storage efficiency but were always faster than RAIDZ

How is the resilver time with that config? I wouldn’t like to do this on HDDs, but SSDs should still be fine although vastly higher than mirror resilver. But I’ve seen several benchmarks with HDDs and SSDs saying that Raidz1 performance is pretty much mirror speed as long as you can throw dozens of drives into the pool.

And yeah, I love those walls of fio output. I just don’t have the drive numbers to make extensive testing of differing configs myself.

The conventional wisdom is that mirrors will always bet faster than raidz, or at least that’s what I’ve always believed.

To be clear, I wouldn’t ever put 22 drives in a z1 for more than FIO testing xD

I think the general rule is to start breaking things up into separate pools past 8 or 10 drives.

In my testing of 24 drives (obviously more drives are needed to test this), 3 smaller VDEV of 5 drives each in RAID Z-1 are not faster or more storage efficient than two 11-drive ZVOLS. I think it’s safe to be + or - 20% of 10 drives per VDEV (between 8 and 12) depending on specific situations.

Right, thanks. I haven’t played with ZFS enough yet to fully grok the terminology.

For giggles, I wanted to get every drop of performance out of this. I put all 22 drives in a single vdev striped 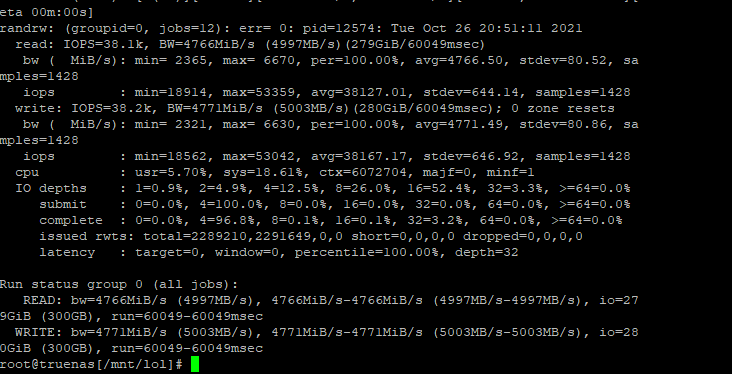 I haven’t played with ZFS enough yet

Join the Church! It’s awesome. Before I built my new server, I was playing around with a fist full of old USB flash drives, building (and destroying) my first pool.

@NicKF how about a 22-way mirror? For Science!

I’ve had a TrueNAS box as part of the homelab for a while now, but haven’t had the time to really dig in yet. 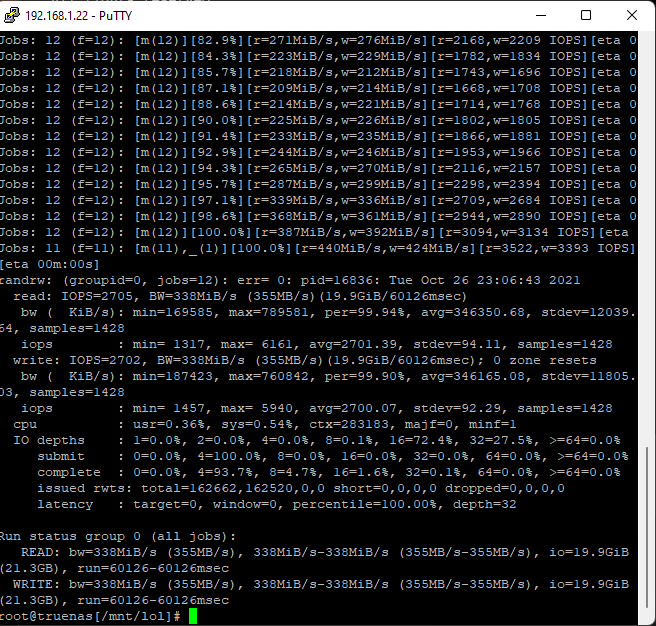