Quite a few media outlets are refraining from dropping the fact that the driver was Muslim. 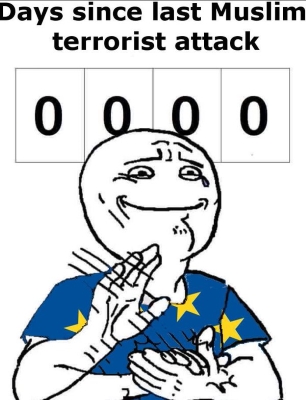 Both Debka and daily Kos reporting that windshield looks like it was bulletproof glass. That points to a planned attack

It is time that we stand up for common sense Assault truck legislation.

Media is already working on it:)

“He is totally unknown to the intelligence services, both locally and nationally,” Mr. Molins said, and he had never appeared in any terrorism-related government database."

A truck plowed into a crowd at a Bastille Day fireworks celebration late Thursday. It was France’s third major terrorist attack in 19 months.

All of this spying and still not able to do anything to stop these attacks. It's like they never learn.

"In this time Of extreme tragedy, remember, We need to do everything possible to do our part in reducing global warming"

And they never will, they will never bring themselves to admit that their surveillance apparatus is ultimately worth jack shit. Their justification boils down to "well, you never know..."

If I didn't know any better, I'd think that they were complicit in this because it turns out that the people charged with thwarting these attacks have completely failed. They're relying on a system that gathers every shred of information about everything that ever goes on, except the information needed to stop terrorist attacks. And they won't employ good old fashioned police work to find it. It's like they aren't even considering it.

"Mr. Bouhlel had a history of petty crime, including burglary and theft,
and received a six-month suspended sentence in March for assaulting a
motorist during an altercation. “He is totally unknown to the
intelligence services, both locally and nationally,” Mr. Molins said,
and he had never appeared in any terrorism-related government database."

So all criminals should be treated like terrorists and be monitored as such?

What sort of country do you want to live in?

Not all criminals. The ones who practice Islam. Because this dude was Muslim, and we know he was Muslim. Sure, slippery-slope hitler we-don't-want-a-Trump-holocaust, but seriously, there's gotta be a line drawn somewhere.

They wouldn't hesitate to profile muslims in Japan or Taiwan. Not enough social justice warriors there to protest it.

That's the part that sickens me. I've never been arrested, but I'm sure I'm on some watchlist for checking out and using tor back when it was a big thing.

I think that's the problem. It's not that they aren't trying, it's just that they can't possibly protect against all this shit. I'm all for catching the bad guys, but this is clearly not working.

Not all criminals. The ones who practice Islam. Because this dude was Muslim, and we know he was Muslim. Sure, slippery-slope hitler we-don't-want-a-Trump-holocaust, but seriously, there's gotta be a line drawn somewhere.

The problem is that in today's society, a solution always pisses someone off. I don't personally like profiling you for your religion, but that said, I can't offer a nicer solution that is just as effective.

Is it too much to ask for some fucking peace? I'm concerned about the future of Islam. If you've ever taken the time to study it, you'll find that in an innocent form, it's a beautiful culture. I would just hate for that to go away because of something like this. Not to say this is trivial.

Let's just get along. We will have our sinful stuff here in the USA and you can do your thing in your countries. Done deal. Stop blowing up our people and we will stop preventing you from traveling and killing your people with drones.

At the risk of sounding like a 15 year old, I'm completely done with this whole issue. We've been talking the same points since 2001 and nothing has changed, except the delivery method.

in an innocent form

That's the problem - if you go to actual Islamic countries you'll see that an innocent form is the one form the religious practice of Islam does not take. If you're gay or a woman and you go to one of those countries, you won't necessarily have the most fun time ever.

The nice muslims - the ones that we're all familiar with and who we love - are the nice, wealthy, middle-class families who legitimately came here out of a wish for opportunity. Religious fervor may not be the first or even second priority in those families. They're good, they're well-integrated, they're educated, and they're outstanding members of society who uphold the law of the land.

Not so with the muslim immigrants and refugees coming at this moment from overseas.

I dislike religious profiling as much as the next guy, but when a religious organization does not lift a finger or a voice to reprimand or rebuke followers who say that going up and murdering someone based on their race, gender, religion, creed or orientation is justified, then I don't see any kinder way of tackling the problem. Painting a load of people with the same brush isn't the kindest thing, but you don't just paint over the tarnished spots on a fence, you solve the problem by repainting the entire fence. /cringeworthymetaphor

Perhaps it's a double standard, but I don't see very many moderate Christians suddenly running into a crowd with a machine gun screaming "DEUS VULT" at the top of their lungs and mowing people down.

I know that Islamic countries have a very different understanding of innocence. The problem is that It's not my place, your place or anyone in the United States' place to determine what's legal in Iran, Iraq, Pakistan, etc... All those countries are sovereign nations, and as much as some of the stuff that happens over there is horrible, it's legal in their country. Think about it this way. In japan the age of consent is 14 or something like that. If I were to go and live in Japan, I would never engage with someone under the age of 18. (I'm 23) I think it's wrong to do that, but that's just my opinion. I'm within my rights to have my opinion, but when I start pushing it on other people is when it's not okay.

Another part of the difficulty with this whole situation is that in most civilized countries, we can't convict someone without having evidence of a crime. That includes terrorists. That's why there are intent laws. (Intent to sell, intent to commit murder, etc...) They help us get as close to the line of arresting an innocent person as possible without actually crossing it. This is a very important line that cannot be crossed under any circumstances.

Perhaps it's a double standard, but I don't see very many moderate Christians suddenly running into a crowd with a machine gun screaming "DEUS VULT" at the top of their lungs and mowing people down.

That's because one of the primary teachings of Jesus was to love everyone equally. There is a vast difference between Christianity and Islam.

I'd say we need to change this discussion topic, as we're pretty much trampling all over Rule 9.

(Japanese age of consent under federal law is 13 but is usually overridden by Prefectural law to 18.)

All those countries are sovereign nations, and as much as some of the stuff that happens over there is horrible, it's legal in their country.

However that was thrown out at Nuremberg. The nazi's said they were following legal orders from a duly and legally elected government. However it was a different age. If Nuremberg was held today everyone would walk.

"He said Bouhlel had received a six-month prison sentence in March for a conviction for assault with a weapon, but other legal officials said his sentence was suspended because it was his first conviction. The weapon used was a plank of wood against another driver after a traffic accident."

I would bet the guy was screaming "Allah Ackbar"

The guy had grenades and weapons. The citizens were unarmed. That gun control stuff really works.

The guy on left, Buck Sexton, actually worked at the CIA and knows what hes talking about.

However that was thrown out at Nuremberg. The nazi's said they were following legal orders from a duly and legally elected government. However it was a different age. If Nuremberg was held today everyone would walk.

I'm not familiar with this, can you elaborate?

The guy had grenades and weapons. The citizens were unarmed. That gun control stuff really works.

I keep saying this. That tried-but-true NRA bumper sticker makes a valid point.

re: the video, How did that woman get on TV? She seems to be under the impression that the faster and louder you can talk over someone the faster you win. Who taught her to debate? She didn't even make a valid point. Sexton really seemed to be on top of his argument.

There is going to have to be a breaking point. Both going to war and just dealing with it suck, but its going to be all out war if this keeps going.

It does. Unlike in the US where it's a near-daily occurence, there are very few mass shootings here in Europe.
Much fewer murders per capita too (less than a tenth of the US' numbers IIRC), so it's not like people are using other weapons instead.

Either gun control works, Europeans are just a lot more civilized than Americans, or both.

I do not think it possible to defend ourselves from terrorism. That is what makes it terrifying and difficult to wrap around. Every single person alive can commit an atrocity before they are stopped, even if they just go on a rampage with a very sharp knife. I mean, I could do it, you could do it. Even racial and/or religious profiling would likely have a poor actual effect in detecting terrorists - it is much better at putting more people in prison than it is at removing the motivation for crime. Besides, the European intelligence agencies already have their people in most, if not all of the European mosques, and even that has had a result below 100%. They are just not hitting hard enough on the terror-ideologists and recruiters.

The argument about gun control comes up very often. Because everyone wants to shoot a terrorist after they do their dirty work. But if everyone had a gun, then the terrorist attacks would just have been planned accounting for that (i.e. escalated the attack), and made it just as devastating. It would be helpful to surprise a terrorist with a gun to their face, for sure. But if everyone had a gun, then that wouldn't surprise them at all.

Finally, terrorist agenda is to make it impossible for peaceful muslims to coexist with the European population. They achieve this by attacking the European population and calling themselves muslim, expecting the European population to suspect all muslims of being terrorists, and increasing discrimination against them (the whip), while simultaneously baiting them to turn to their faith more fervently (the carrot). Shocking us into throwing our values and freedom out the window, and making us experience fear and hate and thus making us their whip. They know this is all they can do. (Note that this exact same strategy is also applicable to white power terrorists)

In the end it is our reactions to their actions, and not their actions on their own, that will undo our society. The only thing I can see we can do, realistically, is to make sure we don't do that dirty work the terrorists want us to do. Only by withholding that satisfaction from them, will they lose the motivation to act again.