Hi,
I came here for some information that I can’t find online.
I’m building my own workstation, it’s been a while so I could use some help.

There are 3 things I’m not sure about.
One: the memory:
I have not bought memory yet but I would like to put in 256 GB but keep the option to expand later to 512 GB. If i put in 4 pieces of 64 GB now to keep 4 slots open, will that work or do I need to put in 8 sticks to use the 8 memory channels?

Two, the power to the Motherboard: There are 3 8pin connections for the CPU on the motherbord, besides the 24 pin. The PSU came with only 2 cables.
Can I use a PCIe 8 pin cable as a third one?

Three: the cooling. This Fractal Design Torrent seams to be great, and I managed to get everything installed and connected so far with all the cables and all, but I’m wondering about airflow, because the CPU is rotated 90degrees. So the Noctua is blowing either to the top, where there is the PSU, or to the bottom, where there will be the RTX2080ti. Should I have the Noctua fan blow to the bottom or to the top?

All in all, so far the installation was do-able and I really enjoyed building it.
If everything is finished I will be using this powerhouse as a workstation for VFX work. I’m a Houdini specialist/freelancer and also a teacher and I use mostly Arnold. Other the that some Nuke, Resolve, UE5, Substance Painter, ZBrush and occasionally some After Effects, all on windows.

I hope someone could help me with some pointers to my questions, looking forward to finishing this build.
Cheers,

I have not bought memory yet but I would like to put in 256 GB but keep the option to expand later to 512 GB. If i put in 4 pieces of 64 GB now to keep 4 slots open, will that work or do I need to put in 8 sticks to use the 8 memory channels?

Buy your 4 sticks and populate four channels as indicated in the manual. You’ll just be using four channels in interleave. Purchase the additional same type (brand and spec) sticks when you can to get all eight channels populated for even better interleaving and bandwidth.

Can I use a PCIe 8 pin cable as a third one?

No, they are different pinouts. 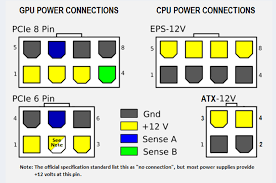 Purchase an additional cable from the power supply manufacturer or purchase a PCIE<>ATX EPS12V adapter to convert a spare PCIE cable.

Should I have the Noctua fan blow to the bottom or to the top?

Heat rises. The power supply at the top will assist the removal of the cpu heat sink exhaust. Blow toward the top.

Leaving memory slots unpopulated will decrease performance somewhat.
There was a measurable difference between having 6 and 8 sticks in mine while I waited for an rma. The octochannel memory bandwidth is a big deal with this processor.
The power supply should be cool.
I have the meshify 2 XL with the NHU14S cooler and blow out the top. When looking at reviews of the Torrent I was left with questions about fitting the ws wrx80e with good ventilation .
It is a big MB and it covered the front cable grommets.
Having the power come straight down to the MB connectors on the Torrent is nice

Wow, that is some very fast replies, and great to hear your answers. So the power cable I will need to get another one, maybe I have one lying around from an older PC, the CPU fan I already swapped to the bottom so now it pushes the air up.
Just have to make a decision for the memory then now. I do not like the idea that I can’t upgrade later, but on the other hand, the prices of Ram are pretty high now, so I guess I’ll go for 8 pieces of 32 GB now and if I need more later, I’ll just have to replace them all.
Thanks guys for your help, really appreciate it.
Cheers,
Rudi

The third ATX EPS12V cable may not be needed if you are not overclocking or have fully populated the PCIE slots with gpus.
You probably can get by with just the two EPS12v cables.
The board comes with two auxiliary PCIE power input connector when you populate with multiple gpus.

Who said anything about not being able to upgrade the memory later?

You just won’t have all the theoretical bandwidth with just the four sticks.

I just read a post about this board here at L1Techs asking about the power requirements and the “third” EPS12V input power connector below the 24pin ATX connector is in fact labeled, PCIE_8PIN_PWR and the manual shows the pin out to be for a 8 pin PCIe connector.

So you have that covered already with just pluggin in a 8 pin PCIE cable from the power supply.

The manual says specifically to get all 8-pin CPU connectors attached.
I did have another good look at the labeling and indeed as you mentioned, it IS labeled PCIe so that was all ok as I had it.

As markwoll says, the octochannel memory bandwith is a big deal with this CPU, so I googled some more on the basics of RAM and found this: RAM Channels Guide: The What, and The How - Logical Increments Blog
That would indeed suggest that 4 sockets of 64 would be the best way to go now, so I’ll be able to upgrade to 512 GB later. But in the manual I do not see anything on what slots I should use for 4 sticks.
Coming from a dual Xeon supermicro system this is weird for me because there it is very important what slots you fill.

The Asus QVL for memory states only this 64GB, so I’ll guess I’ll take that one then:
M393A8G40AB2-CWEGQ

This document is my “bible” for Epyc/Threadripper memory population.
The Book of EPYC :RAM Interleaving
Just think of your TR 3995WX Pro as an Epyc processor.

Wow, thank you for that link.
Near the end it shows that the Memory Bandwith for 4 dimms per cpu (near-balanced) is less then half of the bandwidth of 8 dimms per cpu…

Yes, the processor really does like to have all the memory channels populated.

So if you can swing the 512GB right of the bat with eight 64GB sticks, I would do that.

But the processor is very usable with just four sticks. It all depends on your workload.

I went from 8 sticks to 4 when I cannibalized my first Epyc system to populate my second system. Didn’t really see any difference in 4 sticks versus 8 sticks.

Yes, the synthetic benchmarks did show the bandwidth halved, but my workload is not bandwidth constrained. It is core clock constrained. So that worked out for both hosts.

Great, that is good to know. Straight out of the gate 512GB is a bit too much financially now, I already spent an awful lot on this and it’s another 1600 euro extra. I think I’ll try 256 for now. I’m pretty sure it will be quite a improvement from my actual dual Xeon E5-2696 v3.
That way, when I will upgrade, it’s not only the amount of ram but also the bandwidth.
Thanks again for your help, I really appreciate it a lot.
Cheers
Rudi

Just for some actual numbers about the effect on multi-core scores in Geekbench 5 for my Epyc 7402P with originally 128GB in 8 sticks to only 64Gb in 4 sticks.

Zen2 math capability is just heads and tails so much more performant than Xeon. As long as you don’t need AVX512.

Looking forward to getting things working.
Tnx again for all your information and help.

Well, I just received the Samsung modules and installed them in slots A, B, C, and D.
However, because I got tired of waiting I installed an older and slower batch of samsung modules, 8 sticks of 16 GB of the slowest that are supported in this motherboard to get to a total of 128GB.
That was working fine, but of course at a lower speed.
I started to install windows and also downloaded Resolve that came with a little test program (Blackmagic Raw Speed test).
The funny thing is: with the old and slow memory, but using all slots, I got better results with this test-program than with the new and fast memory, but using only 4 slots.
So now I really have no choice but to order 4 extra sticks of ram to get to 512, using full bandwidth.

To be expected. 8 sticks interleaved is optimum, even if running at base 2133 Jedec spec.

All 8 channels of the memory controller are being used.

Just tighten your belt and grin and bear it with the additional purchase. At least you will be set for the foreseeable future with no memory constraints.

I just reread your post and that you tried your new Samsung 3200 sticks in slots ABCD.

That would have been an incorrect installation. You should have installed the four sticks in ABEF or CDGH.

That would account for some of the lower benchmark results you got.

looking at your specs you chose the right combo of price to performance.
your cpu will handle 3200 natively so you will get max bandwidth from your ram. just select the xmp setting to give 3200 and your good to go.
after a while you may want to adjust timings to get the best from it, but for now. just set the xmp and leave everything else on auto.

and while its not ideal, you will be able to add 4 more sticks as ram, is normally only pair or quad tested as kits anyway unless your paying silly money.
but remember components can change. so the sooner you can get another set of the same. the better.