So for the last 6 months or so I have been having some connectivity issues. I have cox communications with 150Mbps down. 4 Months ago I purchased a CM8200A modem from ebay to upgrade from my SB6141. Even after upgrading the modem, my issues still persisted. The router I’m using is the Asus AC1900 running advanced tomato firmware. My desktop is connected via Ethernet cable directly to the router.

Throughout the day I either experience lag spikes or outright disconnect from anywhere from a few seconds up to a few minutes.

Here are screenshots of modem logs:

The downstream power levels have hit as high as 14.1dBmV and has multiple channels (generally the lower ones, like the 300-435 mhz) were above 10dBmV.

Two days ago i had a cox tech come to my home. It was later in the evening, so I think he just wanted to go home and didn’t do a very through job of testing anything. He only tested the cable line connecting directly the the modem, said it was “fine”, and then replaced the cable line going from the modem to the coaxial outlet on the wall (which I don’t understand why he even did that. Aside from making it “look” as if he was actually working and doing something). He never tested the modem or anything else. I showed him screenshots of the modem levels and logs on my tablet and he didn’t really seem to look at it or care. And when I brought it up for like the 3rd time when he was leaving asking “are these levlels and errors fine?” he replied with “yeah”. He then mentioned “its probably the router causing the disconnects”. I don’t see how its possible if the router comes AFTER the modem. How could the router cause the modem to have ranging errors and t3 timeouts?

I did have a very similar problem about 3 years ago and that tech actually hooked up tools the the modem (and said there were like 15,000 T3 timeouts in the logs, mentioning there was definitely a problem), and he went out into the cable box thing in the sidewalk and replaced the wiring in there, and it fixed the problem. This tech did nothing of the sort.

I don’t know enough about networking to understand where the fault is and/or how to find it, and/or what the tech is doing. Is the problem my modem? (purchased from ebay 4 months ago, and the issue was the same on my older SB6141 modem). Or is it a problem elsewhere? I would like to have more information/knowledge of this before I end up having cox come back out and then them possibly charging me $50 for coming out.

Just had second cox tech person come out to my home. He knew what he was doing, and was able to find that my next door neighbor has really bad ingress in their line and is that is what is causing my disconnect issues. He replaced some of the outdoor lines coming to my home and also said the last tech used the wrong gaskets on the line as well, and he fixed that.

I knew the first tech was full of shit when he claimed it was my router causing the issue. I only know some very bare basics of networking, and I feel I knew more than he did. He never tested any of the lines coming to the house.

So if having internet issues like this, call tech out and make sure they test the outdoor lines coming from the street/sidewalk and to test any other homes nearby which may be causing you to disconnect.

Thanks for the help of those who gave their time.

does the issue happen if directly connected to the modem?

I have not tested that. However the issue seems to happen almost at random. It can sometimes happen multiple times an hour, and sometimes go 6-10 hours with no issues at all. So i would have to sit and game for like 10 hours directly connected to test it while depriving the rest of the house from internet.

However, I think I do have a network switch that I have never used. Could i connect modem > switch > desktop (in first port) and connect wireless router to second switch port?

Assuming you have updated the router firmware etc?

Issue happen on both wireless and wired from the modem?

I did update the router firmware around 4 months ago when i upgraded the modem. Since the issue has been happening for 6+ months, I dont think that is the problem, but I could go update it again.

Yes, this happens with all internet connections.

Any way to monitor CPU/Ram usage on that ?

Also not to be a dick, but you should watch this to better craft questions if you want to get more responses your initial post was a bit wordy and a lot of not needed information.

Any way to monitor CPU/Ram usage on that ?

Wan uptime is pretty short, you replace the cable between the router and modem?

I reset modem/router a minute ago.

keep an eye on that, to see if that connection is resetting or if the cpu/ram usage spikes real hard

I have looked at it many times, and I’ve never seen super high cpu or ram usage (I have a 150Mbps connection and this router can easily handle 1Gbps+). Also, how would this cause so many T3 time outs and such on the modem?

Dont have a lot of exp on the modem side of things, quick google search seems to be line issues.

Explanation: The cable modem has sent 16 Ranging Request (RNG-REQ) messages without receiving a Ranging Response (RNG-RSP) message in reply from the CMTS. The cable modem is therefore resetting its cable interface and restarting the registration process. This typically is caused by noise on the upstream that causes the loss of MAC-layer messages. Noise could also raise the signal-to-noise ratio (SNR) on the upstream to a point where the cable modem’s power level is insufficient to transmit any messages. If the cable modem cannot raise its upstream transmit power level to a level that allows successful communication within the maximum timeout period, it resets its cable interface and restarts the registration process. This error message is DOCSIS event message is R03.0, Ranging Request."

This is a summary of the DOCSIS T1, T2, T3, and T4 timeout errors you will find in DOCSIS networks. DOCSIS timeout descriptions or errors and what they mean. T3 and T4 timeouts are described in much more detail elsewhere in this blog, however this...

So, like many others, I've been having intermittent connection issues. This has been off and on since November (somehow, it improved from December to June). It originally started with my personally owned SB6121. I was told by Comcast that the modem...

Yeah, I’ve also done google searching and found the same information. Its the same thing with the other common error as well “RNG-RSP CCAP Commanded Power in Excess of 6 dB Below the Value Corresponding to the Top of the DRW”. Most replies say to “call a tech” and its “probably the lines”.

Its just I had a tech from cox come out 2 days ago saying “the line was fine”. However, the impression I got from this tech is he was either half-assing things to go home (as it was 600PM) or he was incompetent and didn’t know what he was doing.

Which is why I made the post. I wanted to know if this issue is the modem, the lines or something else. I may have cox come back out, and I just want to have more knowledge about this before they send someone out. As if they “cant find a problem” again, Im going to be charged $50.

Did you call and complain about the quality of the tech?

Well they sent me an email asking for “feedback”, and i gave them a 0/10, and explained as i did above. I also did check the box to have them call me. But again, I just wanted to know more about this.

You seemed to do enough homework on the modem side of things and if you keep getting errors even after the visit then clearly they did not fix the issue. The router seems fine and the link between the modem and the router also seems fine. Calling on the phone is always the best way to get results because it shows you care enough to do follow up and you want the issue resolved.

The only thing is I fear it may possibly be the modem. This is the exact one I purchased: www.ebay.com/itm/ARRIS-CM8200A-DOCSIS-3-1-Gigabit-Modem-Comcast-Xfinity-Cox-Spectrum-More/253623107623

So its not “new” from the factory. So it is completely possible the modem itself is failing. Ive seen posts on reddit and slickdeals that all rave about these modems being great. But its still possible its defective. (again this same issue happened with my SB6141 which was new when purchased and used for a few years). So becuase it happened with both modems, its makes me thing problem is elsewhere. But if it is the modem, ill be charged $50 for the tech to come out. I dont want to pay $50 just for him to say to replace the modem.

If it was happening with both modems the probability is low that it is an issue on the modem side imo.

I dont want to pay $50 just for him to say to replace the modem.

Call and complain about your last tech, you will get a free visit if the $50 is a big deal for you.

I have 2 cox accounts. One in Las Vegas and one in New Orleans. At both locations, I frequently have problems similar to the one your original post describes: connectivity seemingly cuts out briefly. Aside from the annoyance of losing a connection when I was trying to do something, on my debian routers ipv6 connectivity would not resume until I restart dhclient. So I made a script that did it for me, but also logged the occurrences. And I get an email every week enumerating the dropouts: 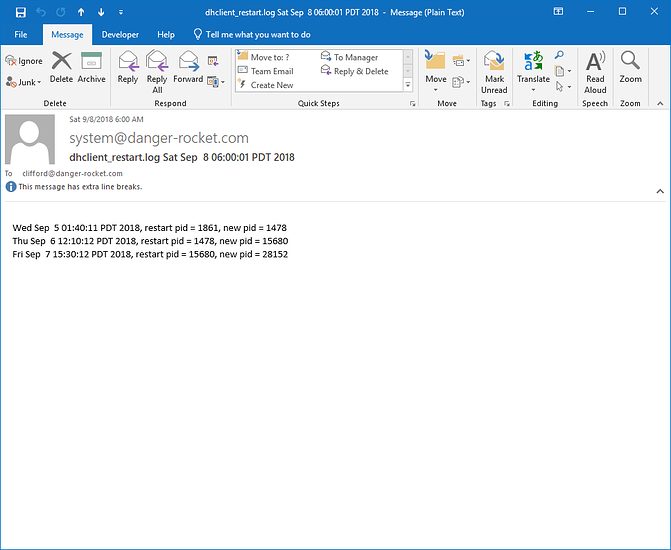 It happens at both locations on an almost daily occurrence. I have no idea why. The dropouts don’t coincide with dhcp leases expiring. In Vegas I have a SB6141; and in New Orleans I think I have an AC1750.