At the moment i've got a 560 graphics card, and i'm thinking of getting triple screens. 23" 1920x1080 and i'm wondering if my graphics card can handle three screens. I've read on different forums that graphics card in the 500 series can't do 3 screens without sli. So would upgrading to a 660 ti or a 670 just be an easier route as sli can have some issues? Also does the GB make a big difference? Say i get a 660 ti 2gb 256-bit would that be able to run eyefinity if i go in that direction? or would upgrading to a 670 3 or 4GB verison the best route?

Thanks in advance for all your answers!

Nvidia supports only 2 monitors per 1 card. AMD/Ati got the eyefinity that lets one card support your 3 monitors. One superb card is better than playing with SLI/Crossfire. That second will only get you more power consuption and temperature rise with some performance boost. Get a proper single GFX card or if you reaaaaaally want Nvidia got with SLI...

Not sure how the actual experience is for eyefinity vs 3d/2d vision surround setup but I just want to add that vram is the biggest limiting factor when running ultra high (3x1080p+) resolutions after raw gpu performance.  I'd say get at least 3GB of vram.

Also note that when using SLI/Crossfire, the amount of usable ram does not double or triple or quadrouple, depending on your setup.

ok so at least 3gb and i'm confused can i use an nividea card? or does it have to be amd? I'm planning on using http://www.newegg.com/Product/Product.aspx?Item=N82E16824236153 three of these monitors. Now i don't mind doing crossfire or sli but i don't know if my mobo can support it and i've never done it. So i'm just assuming a better single GPU would be better. I really want to keep the monitors and graphics card together below a grand.

I ran eyefinity back on my 6950 x 2 setup and it worked great, then the 6990/6950, and then the 7970. By far the single 7970 oc'd was smoother and just a much better experience for eyefinity. I got sick of the three screen gaming pretty quickly though. It's all about high res single monitor :D

Yeah i'm not quite sure if i'm going with 3 screens or going with a big high res tv yet. Right now im using a 32" samsung with 1366x788( or something close) and its clealy not very high res. I'm just to trying to see my options. Any advice would be helpful :D

I ended up liking my 3 screens in "portrait mode" the best. It actually gave you a legit higher resolution... I think I was at 1900p. Running BF3 looked fucking incredible! However, the monitors I have don't display light properly at those angles. Little things annoy the shit out of me like that. When I ran the monitors all at 1080p side by side like most do in surround/ eyefinity it just didn't see worth it. It was cool at first because of the peripheral vision in certain games and I actually did make use of it in Skyrim, but the game was still 1080p and nothing was really enhanced by playing it like that.

Running portrait mode made me realize what I'm after is legit higher resolution so now I am gaming on a 1440p 27" led monitor. I'm waiting on the damn 4k technology to hurry up and come out and get within a reasonable price range! hahaha

This was portrait mode 1900p.. If I could find monitors that had the proper viewing angle to work like this I would go with that again. The detail in the games is so nice and you don't even need to turn on msaa because the lines are already so crisp at that resolution! 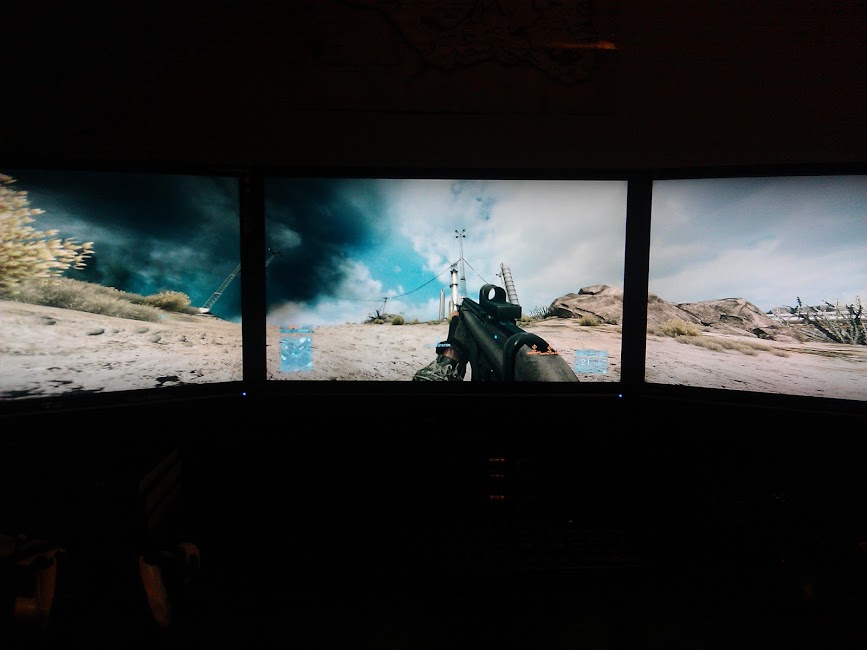 See how much more is on the screen in portrait mode? Changed my life :D

I would get a 7970 seeing it can handle anything you can throw at it. Also overclock it to it's highest for better performance. Just make sure you have good cooling and air flow

XFX, Sapphire and Asus are my picks

I love my xfx dd black editions! Over clock like a bawwwwssss