This is a companion discussion topic for the original entry at https://level1techs.com/video/tr-2990wx-programmers-workstation-linus-torvalds-edition-sort
4 Likes
Calibur1 September 20, 2018, 3:31pm #2

Good video, can’t wait for the next one. I currently in a holding pattern for my next workstation build and that ram video you teased is what i’m waiting for.

The one thing I’m very curious about is how that WX7100 is holding up for you guys under Linux. Pretty sure in your part 1 video (about that card) you said you’d do a part 2 with benches that never happened.

Under Windows, I’m not that impressed with the performance of the WX7100. It likes to burn itself up and then thermal throttle a lot.

In a server situation the card does nicely if I have enough front->back airflow. In a normal desktop case I just don’t seem to get enough airflow over the card.

Silver Arrow TR4 comes out in October, might be the way to go.

The X399 taichi’s VRM “Heatsink” is so tall it may interfere with some TR4 coolers.

I’m kind of curious why the MSI Meg X399 Creation wasn’t used if the VRMs were of concern, Afaik it has a “better” VRM design as the Aorus Xtreme.
The only defecit would be no 10G NIC which could easily be added.

What an amazing video. I had to watch it three times. I hope Linus reaches out and gets a solid upgrade.

We trade
Linus gets PC
Kernel project goes back to the “Code of Conflict”
Win Win.

Software dev large, parallel builds, is one area where the 2990wx “just works” very well… kernel/os dev is a no-brainer for this. Build times have gotten horrendous these days despite all the GHz.

I’ve been enjoying the heck out of 64-thread make. Wonderful for testing configurations that require ground-up re-builds of large packages.

Beautiful pieces of hardware!
Have you tried compiling Android on this setup? I’d be curious to know how fast it compiles the aosp from scratch.

Please stop… your post making me add things to my shopping cart.

The reviews for the TR Enermax AIOs are pretty terrible on Amazon. A lot of people have leaks.

I think for a system like this (if you plan on overclocking), a custom loop with monoblock is the best solution right now. But then you have extra maintenance, which is a problem with a workstation.

Yeah, those reviews (Enermax) and searches generally steered me away from that solution though I didn’t want to go full-custom just yet. I did as I had all but the block on my shelf, but I would have rather had a turn-key option. I tested for a week with the Noctua sink and 2-fans at 100%. It worked surprisingly well. I may go back to that and a 4.0GHz at low(er) voltage for 24/7 for a quiet machine if I can get the fans low enough.

I understand that they recognized the issue and have various responses including replacement? (don’t take my word for it) for early models. That’s a good thing, but that it is needed doesn’t give me confidence that you aren’t just Beta rev2.0 testing.

One question:
If air intake was of concern, why is the rear fan also exhausting? 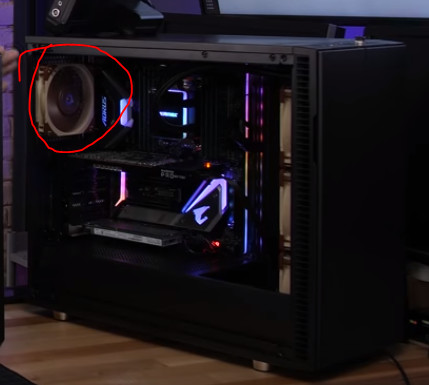 I tried it both ways and it seemed to work slightly better as an exhaust rather than intake as long as the bottom fans were moving more air. I thought it was a bit weird, but didn’t test super extensively beyond a couple 6 hour bench runs

Could be because of the power supply shroud directing air, maybe?

Curious and probably up GamersNexus alley.

If I were to guess it might be because the air around the peripherals stagnates a bit in the other config ? maaaaybe? Should vape test it lol

Is the bios a gigabyte thing? Tried recently on a much lesser system for a project (2700x/giga G7 x470 w/f4g (IIRC)) and it would get hung up on install for the current Unbuntu LTS/Mint distro’s. Digging into the forums seemed like grub modification plus (??? can remember) but Red hat worked. Alsohave a temporary workaround but I would like to go back to an Unbuntu or Mint distro.

I think I will go with the Define C, Maaaaybe wendell could test in that case also?
I’m not gonna hold my breath, transplanting systems is just not that fun.

The reviews for the TR Enermax AIOs are pretty terrible on Amazon. A lot of people have leaks.

Wendell explained it, those are from the first generation and Enermax will replace them under warranty no questions asked.