To upgrade or not to upgrade?

This is my current build.
http://ca.pcpartpicker.com/p/kYvk3C

I would like to hand-me-down that 770 to pcify my nephew and welcome him once again into the pc gaming family. He just sold his xboxs (yes he had more than one xbox 360) and is stuck playing that xbone vcr box from 1985. He also still has my old i5-3570k with a beast asus rog board so that 770 would make it complete for this generation of games coming out now. Right now that rig has only a 560TI so the 770 would certainly help it.

Problem I'm facing is a 900 series card worth it?

I could be persuaded to try out an AMD card. But I am totally at a lose to what to get there. Any suggestions would be great.

If you want to go for an AMD chip and are considering a 960 I would go with a R9 380. You can get 4GB of GDDR5 and although it has a lower clock speed it out performs most of the GTX 960 cards. Here is an amazon.ca link for one that is in your budget. 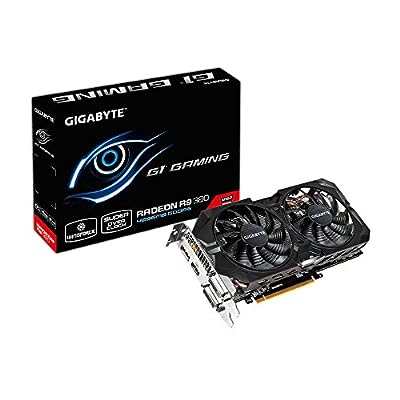 Should get a 390 over a 970, that'd be the card to get rather than getting a 380 with more VRAM, really nvidia isn't too great a choice at the mid range right now, the AMD counterparts outperform their cards, unless you get down to 750ti territory.

Should get a 390 over a 970, that'd be the card to get rather than getting a 380 with more VRAM, really nvidia isn't too great a choice at the mid range right now, the AMD counterparts outperform their cards, unless you get down to 750ti territory.

His budget won't allow it unfortunately >.<

the AMD counterparts outperform their cards, unless you get down to 750ti territory.

Also not really fancying upgrading from my CM 650m PSU.

650W can easily carry any single GPU videocard... So no need to worry there...
My choice will be 290. Still amazingly powerful, and if it will save you some money - go with it...
Otherwise 390 is a better choice for the next couple of years. At least in my opinion.

Thanks man, i'm completely baffled by GPUs nowadays. I'm guessing the 390 is better at higher resolutions, but otherwise isn't the 290 actually the same processor just with less VRAM.

This is the deal, seems quite good for this side of the pond, althouugh it just went up by 10GBP

on fun note, i ordered a mechanical keyboard from China that arrived today, still getting used to it but it is incredibly satisfying compared to rubber dome boards! It's got blue switches in there, the kailh ones (i think that's how you spell it) picked up for 30GBP)

Check out the performance... 390 wipes the floor with 290 in every game... It's the same core architecture, but obviously something has been done to improve it...

seems as though nvidia are out of the mid range market a bit, am i right in saying it'll get worse with dx12?

i at least want to keep up with generation of console at 1080p with 60fps on mostly max settings, although i am willing to drop settings! you still reckon the 290 can achieve this?

Thanks a lot for this by the way!

I'd just wait for the next generation or something

that's good to know, it seems strange after reading so many articles about AMD struggling so badly! All the Youtubers keep banging on with Nvidia and Intel and very much high end devices. not a fan boy but i've always liked an unnderdog, go team red!

So, what have you got in your system?

Cheers mate, they seem to be coming up sub £200 on Ebay, am i right in thinking i should avoid cards with reference coolers? they do seem to be a fair bit cheaper

The stock reference coolers are pretty noisy but if you want to spend a few more monies on it, you can get a single 120mm AIO cooler and a Corsair HG10 A1 bracket for the reference card and make the blower noise a non-issue. Keep in mind the Corsair HG10 A1 only fits a reference 290 or 290X.

sounds like an interesting option, i'll definitely look into that.

Do you think i would run into any CPU problems, i'm running a lightly overclocked fx 6300.

Thanks for all the input folks. Think I might buy a mid-range for my nephew even a 960 will be a huge boost compared to his current 560TI.

Guess he's not getting my hand-me-down till I get a 4K setup with my main rig.

3-4GB of vram is enough for 1080p gaming, but this is irrelevant due to DSR allowing games to be rendered in 4k and down sampled to 1080p. Running your game at 4k with minimal filters is the same or better image quality than running at 1080p with max filters with similar frame rate performance. The 960 is a bit underpowered to rely on being bale to consistently use DSR, and thus won't be able to fully leverage a large amount of vram.

Of course DSR only matters if you have higher end cards (i,e. 970 equivalent and up).

Games such as Shadow of Mordor can pass the 5GB mark for vram usage with settings cranked up. Obviously 3-4 GB is faaaaar from enough vram for some modern games played on higher settiings.

Really the two cards to really look at are the 980ti, and the r9 390. The 980ti is at such a relatively cheap price point that you will see increasing returns instead of diminishing returns when comparing it to cards of a lower price point. Therefore I feel the 980ti makes it not worth getting a Fury, 980, or perhaps a 390x. It is worth spending the extra money on a 980ti.

The r9 390 is the card at the sweet spot for performance/value. It straight up trumps the 970, and covers the below $500 price point fairly well (since the 980ti is worth paying extra money for). The 390x is decent, but people have argued that it doesn't perform well for its price point.

The 980ti for $900 Canadian is pretty steep, but there is a deal that bundles in an SSD for free: http://galaxstore.net/GALAX-NVIDIA-Geforce-GTX-980-TI-HOF-6GB-FREE-GAMER-L-240GB-SSD-BUNDLE_p_41.html

I am also Canadian and here are some economic things to consider:

-It is possible that Trudeau might implement new economic strategies which will make the dollar rise (would have to look into that).

-black Friday is just around the corner, and these deals are trickling up here more and more every year.

-EVGA has a 'B stock' section. From what I gather these are cards with cosmetic imperfections. Stock changes all the time so keep checking it: http://www.evga.com/Products/ProductList.aspx?type=8