Just some basic to advanced physics.

Ok.
Why you are using De Broglie for something as simple as googling idk.
Also De Broglie is for light.
and again there is more to his equation then just lamba= h/p

It is German but that is what I got:
The upper one is position/pulse, the lower one energy/time 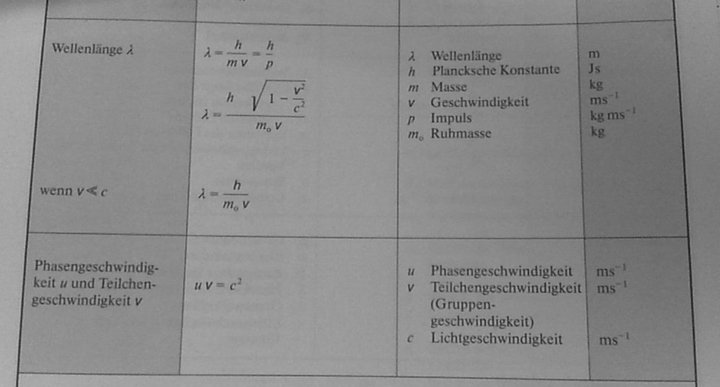 Photons at 0 m/s stop existing. E=hf Therefor the frequency f needs to be >0.
Why should E=mc² not work for moving objects? We are just speaking about mass here, no position or time hands we do not need Mr. Heisenberg here.

Edit: My brain just went 'nope', guess I need some more time to figure everything out.

You have lost me here. What is it you are talking about. photons are massless, therefore they move at the speed of light for that material. There is nothing left to be said about that.
And E=mc^2 doesn't work for moving objects bc of kinetic energy. Thats what there is the last half of the equation is.
Lastly photons cant be slower then the speed of light. C is boundary that can not be passed in both directions. Also photons never lose energy. Its either transferred to heat or light or something. And yes for electrons you do need Heisenberg, ALWAYS need heisenberg for electrons.
so are we talking electrons or photons?

Protons travel at speed of light so they don't have mass (they do). Protons never reach 0m/s (but you can slow them down).
e=mc^2 is mass-energy equation.

i think what you are looking for is Coulomb effect.

*Photons
Protons together with Neutrons form the core of an atom.

Im assuming you mean photons
And yes you can slow them down but you can also slow light down. Light travels slightly slower thur everything than it does a vacuum. doesn't mean a photon can slow down past c

In fact at near zero K you can slow light down to a crawl. c is not a constant for all things. there is a c for every condition and photons, which are the particle form of light follow that speed and do not go lower than c.

Photons are light/gamma radiation. You know, this:

no photons are photons. waves are waves. they are related by your equation E=hc/λ but they are two different things.

yeye, problem is what exactly do you want to accomplish?

do you just want to talk about quantum duality? Implementing quantum network (easy to accomplish - but useless unless core network)?

Photons behave like waves and particels at the same time proven over and over again by this little experiment: https://en.wikipedia.org/wiki/Double-slit_experiment

nope that is incorrect. double slit prove waves
you can not prove both at the same time

yeah but we can use duality to constantly pump them in... and simply polarize them before the read occurs and magic runs out. This way we can transfer data without time (time is still taken as on reads/polarization)

true but again you can not show both at the same time.
and you can only polarize something 90 degrees anyway
unless you really want to get into quantum entangling.

Take a grating: Polarized light in no time! Take another diffraction grating, tilt it by 45° to the first one and get wierd results when adding a third grid at -45° or 90°