I have been working home for the last 6 months. I’m a developer and I do have a lot of meetings in Microsoft Teams. Most of the time its only audio but sometimes we also use video. I currently have the Logitech C270 for this as it has a decent mic. However I was wondering how I can improve mainly my audio but also video quality on the cheap? DIY pop filter? Settings to enable/disable etc?

Downloading and installing software such as OBS can be difficult though as we cannot install software that are not approved by it helpdesk.

Also, when I record audio on my computer, it sounds pretty good, But when I do a Teams test call, the quality drops significantly. Is there anything you can do to improve sound in teams?

Pick up a condenser mic? Do you have a budget? Might not fix your issue tho

it sounds pretty good, But when I do a Teams test call, the quality drops significantly.

https://www.adorama.com/rdpodcastra.html
Good option if you have a bit more money @oO.o got this recently

If you have a RTX card I recommend downloading NVIDIA Broadcast.

I always have it running and it uses some AI-thing to remove background noise from mic. Collegues can’t hear me smashing my mechanical keyboard while talking, and removes the occasional dog barking as well. Imo it’s pretty amazing.

Can also be used to add custom background if you prefer doing it that way instead of in teams/zoom. 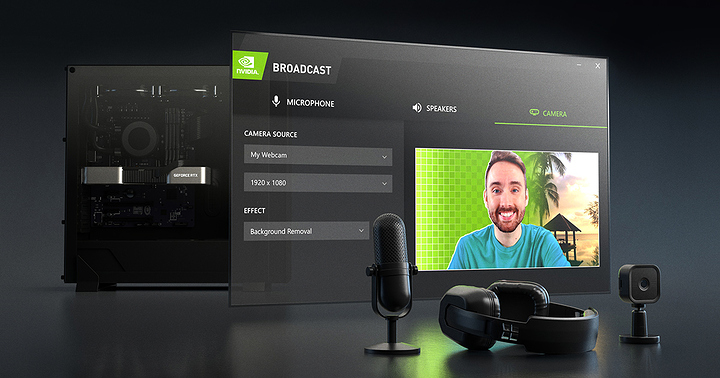 NVIDIA Broadcast App Out Now! Turn Any Room Into A Home Studio On GeForce RTX...

Turn your gamer den into a home studio.

Edit: Just saw the comment about helpdesk not letting you installed random software, so maybe not so helpful

However I was wondering how I can improve mainly my audio but also video quality on the cheap?

Depending on how much echo and reverb your room has, a curtain or two may help.

But when I do a Teams test call, the quality drops significantly.

What is your Mic set to? I would set to 16bit 44.1kHz (or 48kHz) sampling in an effort to avoid resampling in Teams/Discord, etc.

Might also want to check if auto-volume adjust and auto-amplification is off.

Apart from that, only way is to get a better microphone that is suited to the use case. With the monitor in front of you being a very good audio reflector, you don’t want a mic that picks up what is going on behind it (rules out Ribbons, despite them being awesome for voice).

Large Diaphragm condensers like all the youtubers (ab)use will pick up a lot of room sound, which may not work towards making your voice clearer.

Small Diaphragm condenser and pop screen (AKG P170, Superlux S241, Shure SM57 ← Jack of all trades Mic) in an untreated room will give you a much better experience (= not sound boomy like a lot of youtubers/twitch streamers do).

Or you can get a Dynamic mic, those pick up very little room sound. I know Audiotechnica makes the ATR2100x-USB or Samson Q2U which can operate as an XLR mic or USB device.
Another “everyones favourite” is the Shure SM58, needs an XLR interface though.

Please don’t buy an SM7B and plug that into any audiointerface under 600$/€. That thing eats Mic-Preamps for breakfast! So unless you want to also buy a medium quality channel strip, stay away from it.

However I was wondering how I can improve mainly my audio but also video quality on the cheap?

Add more light. Take the time to learn about what key lighting, fill lighting, and hair lighting is.

I’ve seen a ton of people upgrade cameras thinking a better camera will result in a better image. It rarely does, and almost never until you’ve got basic lighting in place.