Time for a new router?

I currently have a Asus RT-N56U which worked great the first two years I had it, but now it drops connections/times out the connections for about 5 minutes when a computer goes to sleep or when an Xbox 360 gets turned off. I've tried opening ports for the Xbox, changing channels from 1, 6 and 11, turned off QoS, however I'm pretty much a noob in terms of networking. I've changed the Firmware versions a few times too. Upgrading didn't help, downgraded and still didn't help so I upgraded again.
Maybe some of my settings are off? Here is a screen of some settings.

I dont mind buying a new router, I just want one that wont drop connections like this one does. At most it there are around 13 devices connected but not actively using internet to the router. I was looking at the Linksys WRT1900AC since I used to have a Linksys wrt54g and it worked like a champ until it started to drop connections too. Any other router recommendations? The internet here is basically only used for console gaming, watching streams and basic surfing. It's about 4mbs down and 300kbs up with a MOTOROLA SB6121 SURFboard if that helps 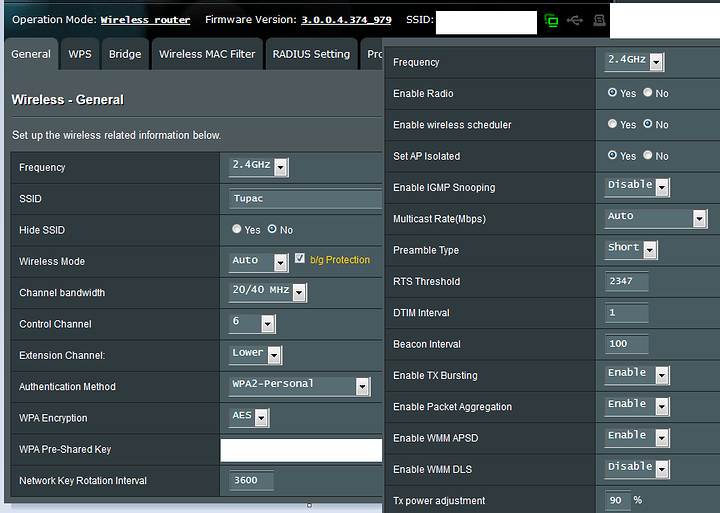 I have tried resetting the router on numerous occasions, this has been an on going issue for the past 8 to 10 months. The members of this house hold don't understand technology very well so they think the dropped connections mean I'm downloading/hogging the internet.
I've switched back to the ISP provided modem but that didn't help either, the internet stays up if you're plugged in via LAN but the wireless just stops working for several minutes.
Apparently this is an issue with my router as there are many reviews about how after a few years the connections start to drop.

Buy an access point, and hardline it to your router.  With that many devices connecting to your router, you're bound to have issues.

I am currently running this with my N66U; no complaints.

Also, I just noticed your Tx power level is quite high.  Change that to 10, not 90, and see if that makes a difference.  The longer the signal, the weaker it becomes, so if you decrease the Tx power, then you should see less connection drops.  For reference sake, mine it set to 1, and I am in a 3 story town house with no issues of dropped connections or weak signal strength.

The place the router is in makes it basically impossible to run cables to it unless I buy 50+ foot cables which I no idea where to buy without it costing a ton. Otherwise I'd run hardlines for everything possible. I will try the Tx Power level, someone also told me to turn the channel bandwidth to 20mhz only.

Yep, turn ch bandwidth to 20.  Also, elevate the router as high as you can.  Elevated wifi signal does better than one that is not.