I’m building a new buildserver for the Godot game engine. While buying the parts I decided my desktop could use an upgrade also. So I’ve build two 2990WX systems using basically the same hardware. The stack of stuff is here: 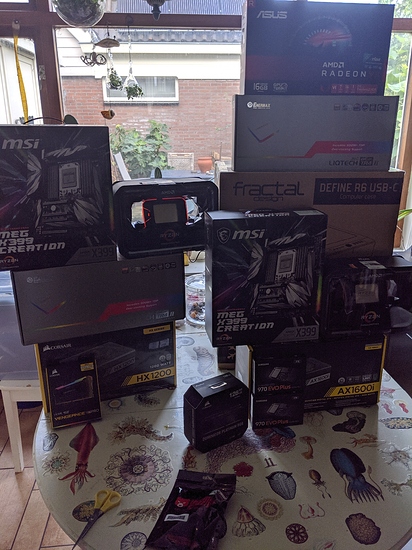 Step 1: Unpacking the power supply. Note that if you get this PSU that the power cable is the high AMP one. So don’t lose it, you probably don’t have many of those laying about 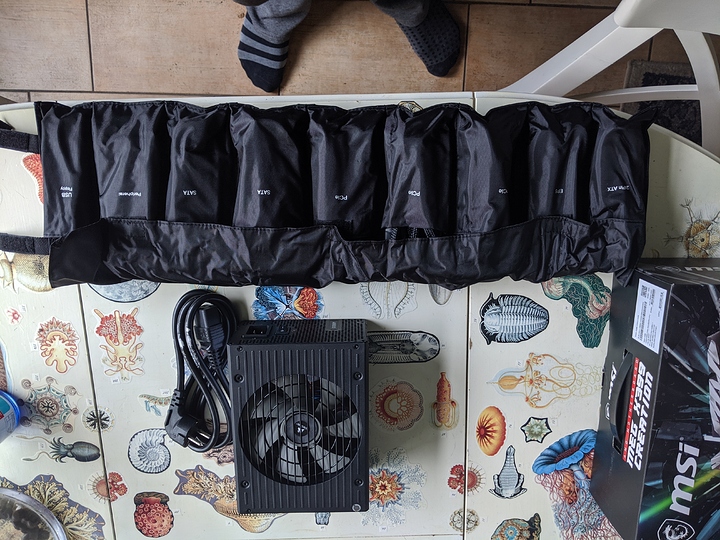 Step 2: The reason for unpacking the PSU first was that I wanted to use the BIOS flashback feature of the motherboard to update before trying to put the whole system together. This turned out to be an excellent idea. Also it’s kind of fun to see the motherboard doing ‘stuff’ while it has nothing plugged into it. 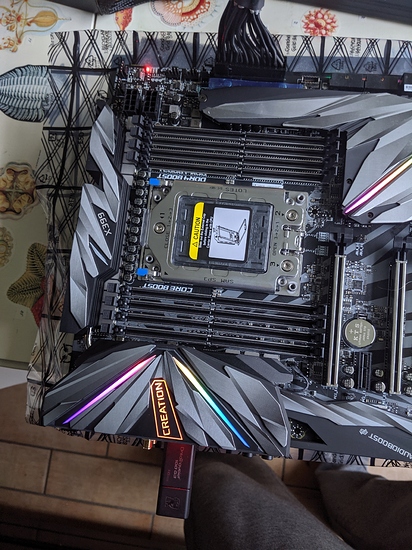 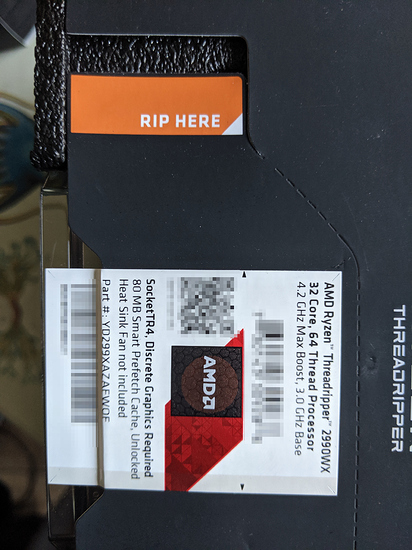 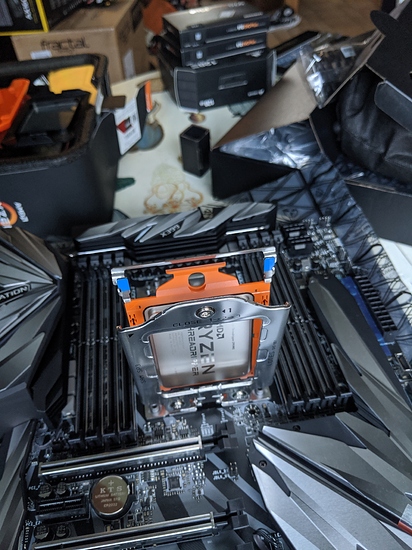 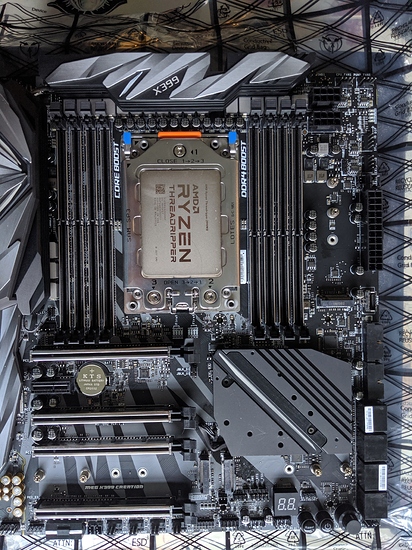 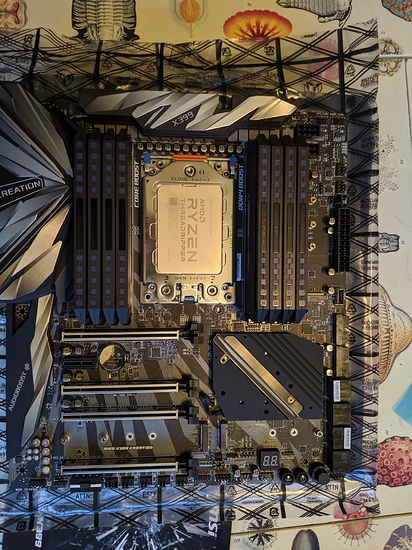 Step 4: Preparing the case. This will turn out to be a mistake. The Define R6 can be configured in two ways. The normal and open configuration. I tend the prefer the open config so that’s what I did. 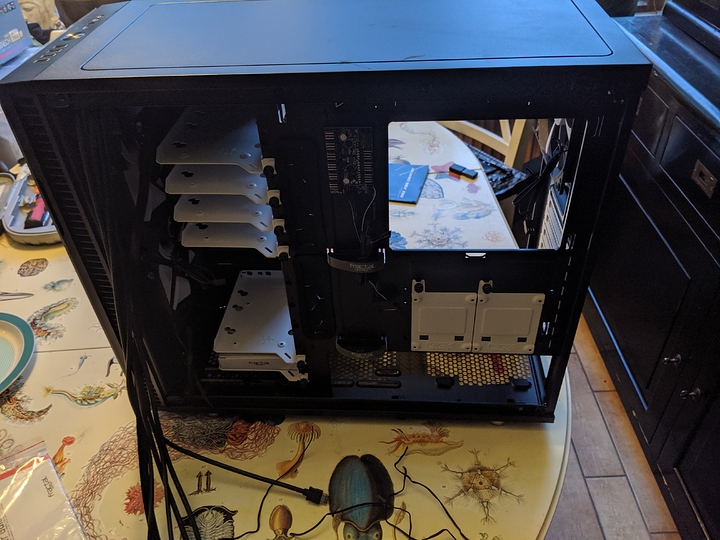 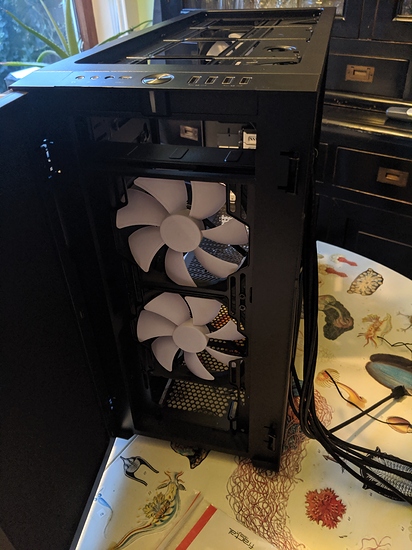 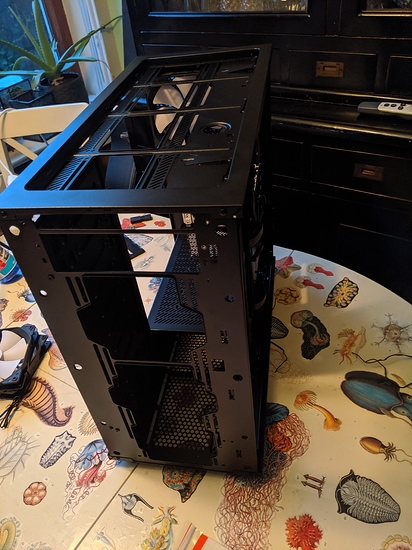 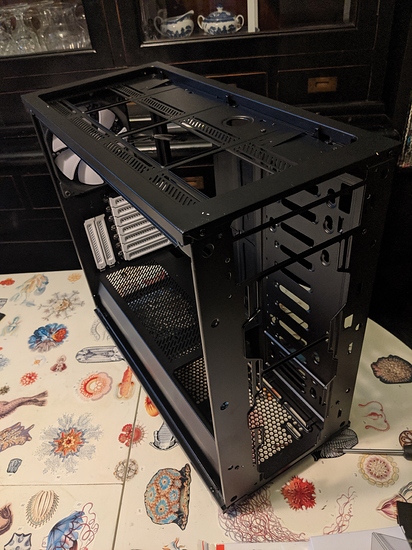 The case is now in the ‘open’ configuration, moving the harddrive case panel to the other side leaving the whole front, well. Open. 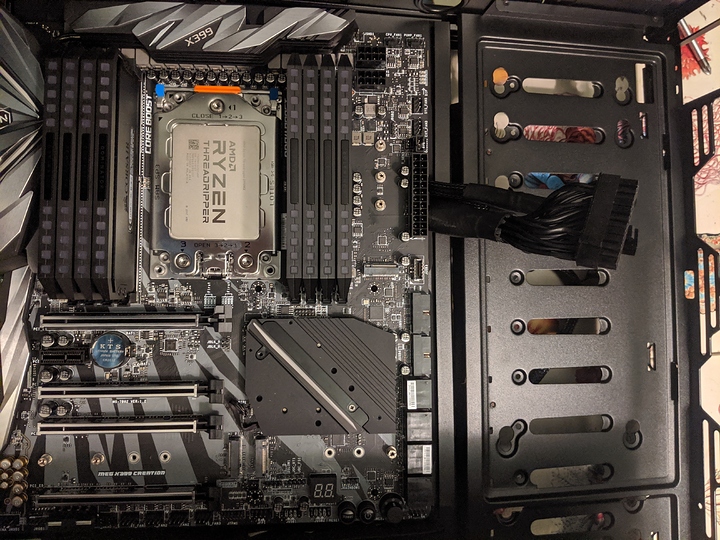 There’s not enough clearance for the power cables in the cable management holes due to the size of this motherboard… So putting the case back in the closed config. 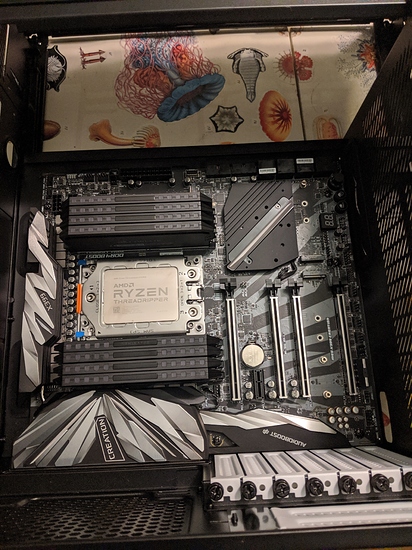 Step 5: Finally time to get the rad installed: 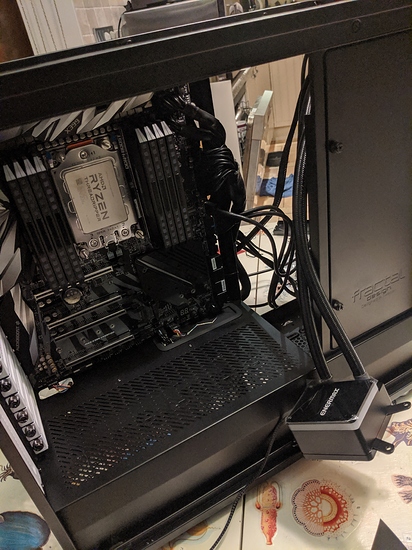 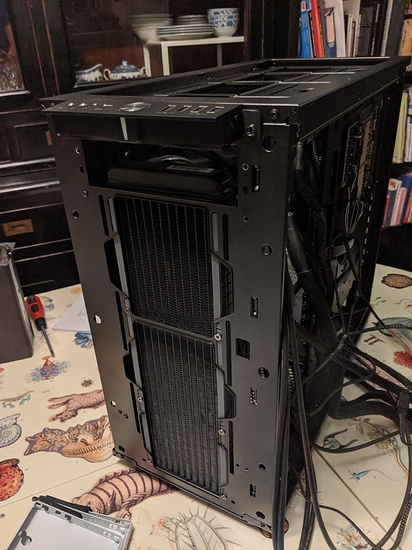 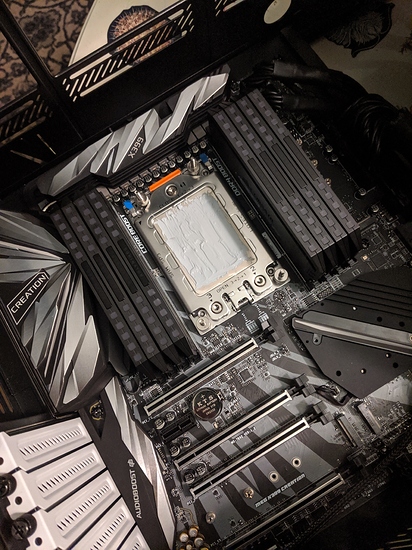 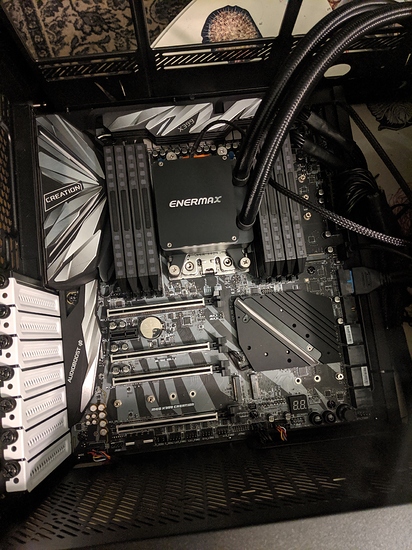 Step 6: And the Radeon VII 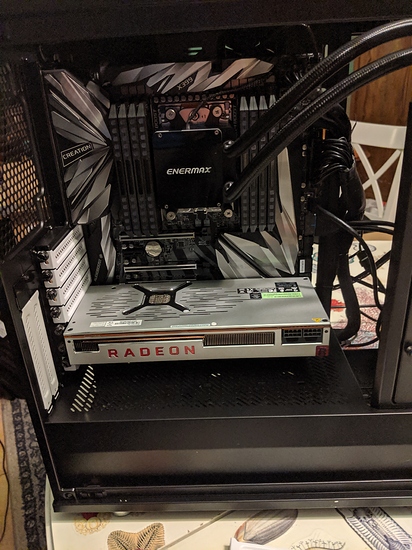 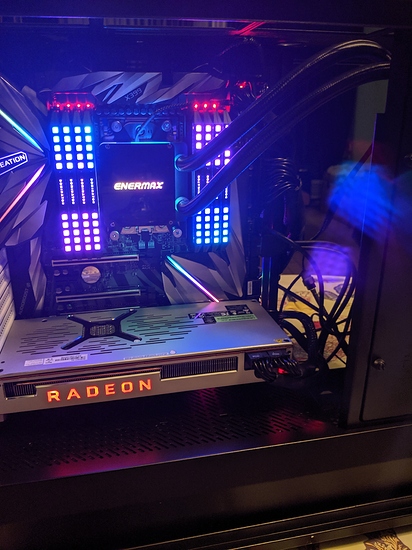 After a couple more days of tweaking the innards now look like this: 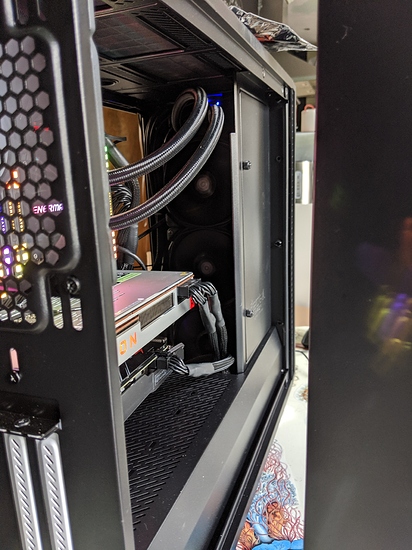 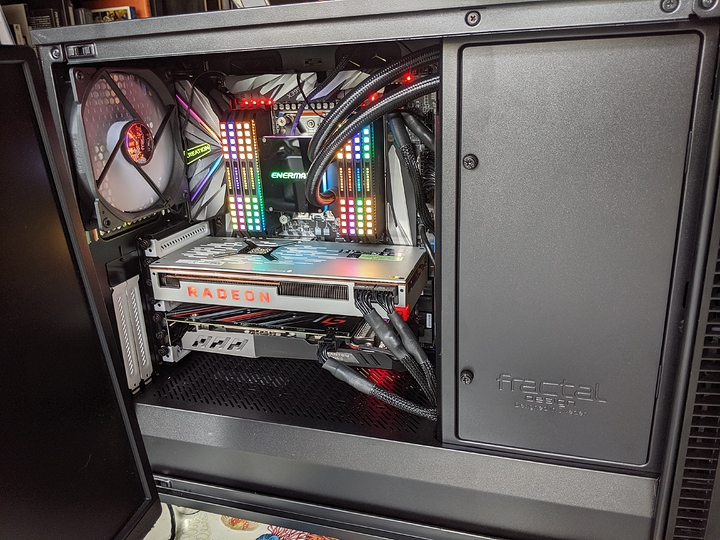 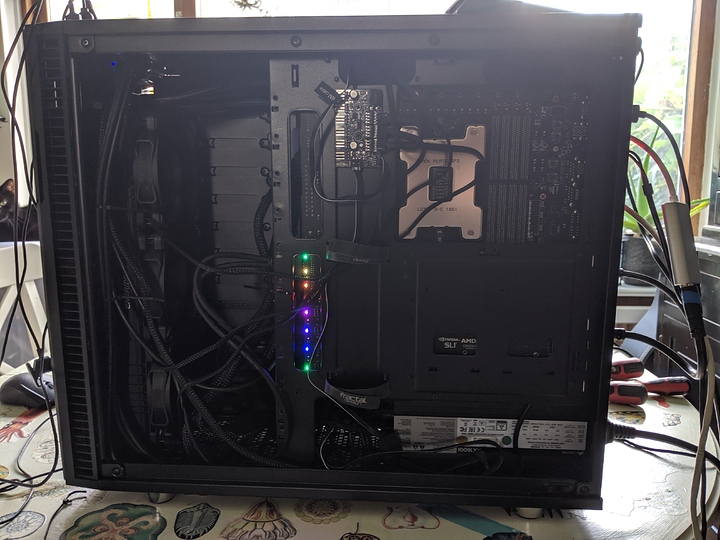 As I said, that door can hide a lot of cable management sins.

System is running Fedora 30 now, and I added an extra RX590 to play with passthrough GPUs. Under compile workloads the CPU boosts to about 3.8GHz all core, for lower-thread workloads I see about 4.1.

The second one I built was basically identical so I didn’t think a full buildlog on that one would be super interesting but I have a shot of the installed box here: 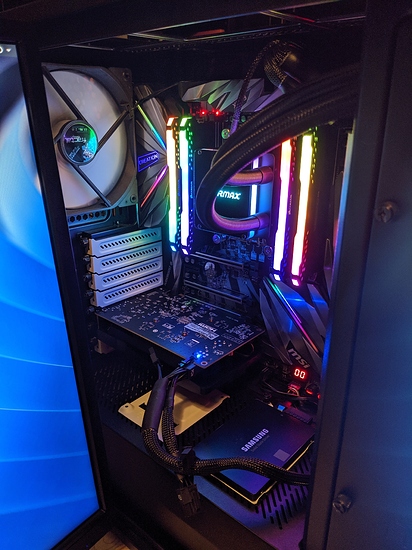 The specs are the same except it has 64GB of RAM, 1 1TB NVME drive, and 3 2TB SATA SSds. The GPU is now an RX560 but that will get downgraded to some single slot card (TBD)

I’ll leave you with a shot of two friends ripping threads: 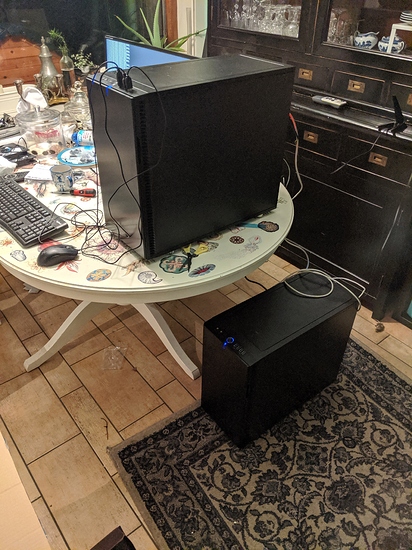 Not trying to be a smart arse or anything but I’d be a little concerned with the long term health of the Enermax AIO’s.

I saw this. Thanks for the heads up! According to everything I’ve heard this problem is limited to v1. Time will tell I suppose.

I just used the Noctua TR4 Air Cooler for my 2950 build, I love it and it’s fugly fan too, haha

i was a bit worried about having an air cooler on such a massive processor. Mostly for noise. How is it for you?

The AIO I have is essentially quiet, you can hear air rushing out through the vents if I really push it for a while but with the door open it’s still mostly quiet.

I have had 2 Gen 2s and both failed on me.
I have up and switched to the Cooler Master ML360 TR4.

The noise if ine until I run multiple apps at the same time and spiking the CPU corres, then I hear the fan spin up.

SO yes an AIO unit would be a quieter solition, for me it’s not a big deal as I have fans running in my room year round due to the equipment heating it up

Thanks, how soon after installation did they fall for you?

I hope that Enermax is standing by their products and offering everybody a FREE RMA Replacement, but I heard that they are trying to charge shipping to some or all peeps ?

At the very least European consumer protection laws should make it impossible for them to pull something like that.

At the very least European consumer protection laws should make it impossible for them to pull something like that.

Why? They get two attempts to provide a functional product, then you get a refund.

There’s no 2 year limit on that. The factory warranty period also means very little in Europe. When you buy a product you’re entitled to a working product for the expected lifespan of such a product. They might have to replace the thing every 6 months for 5 years. Not only that, you can terminate the purchase of a faulty product. I had to do that with an Asus laptop over a year after I bought it (it had been in repairs for 5 months out of the year and 2 months I owned it for). Got all my money back.