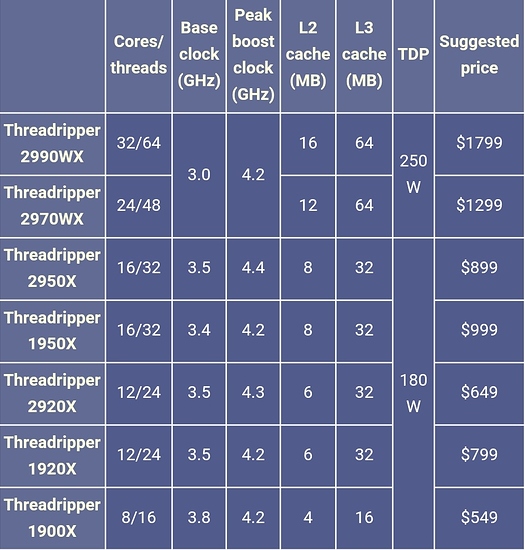 Let’s tackle the elephant in the room right out of the gate, on the 32 Core only two of the dies have direct memory access, it has a few implications and looks like this:

It’s best to go read some reviews to see how the CPUs preform.

My TLDR; The 2950x is the real deal, whereas the 2990WX is only sensible for certain workloads.

AMD's Ryzen Threadripper 2990WX CPU puts 32 cores and 64 threads in a single high-end desktop socket. We thoroughly tested the 2990WX to see whether all that horsepower is enough for AMD to lay claim to the title of the fastest desktop CPU around.

The 2990WX is currently performing horribly in games with all 32 cores active, of course this can be rectified by turning off two or three of the dies.

Yes not a gaming CPU, everyone and their dog knows this, worth a mention nonetheless.

Yup…
They had 2 goals - 40% better performance and as cheap to make as possible. They had about 50% better performance and the cheap manufacturing makes it way better for core scaling and cooling and everything.
It’s made out of necessity, yet it is amazingly good design.
It is why we have better desktop CPUs than Intel had on servers till yesterday…

Yes they did a good job with Zen, it’s getting hard to recommend X299 and my question to buyers go: do you need AVX512 or best compression? No? Then go threadripper.

When are you getting your hands on one?

havent decided. Probably will preorder the 2950x so around the 31st or after.

why aren’t you getting one from amd? or someone from other reviewers passes theirs(?) on?

im kinda bothered by this. i want you to have one.

Well I mean I get it. Level1 is kinda niche and those guys put in like a zillion hours benchmarking. We aren’t that big with our minion army yet.

I did reach out and some in the industry also advocated for us but I don’t really mind. We buy more stuff than most people realize anyway.

Tempted to buy the 2990wx but super on the fence.

Do you have workloads that make sense for it? I mean couldnt you just get a Eypc for a bit more and loose a lot of the negatives

No it’s 6x6x6x6. And Linux scheduler is much smarter than windows, so it works better as expected.

Wonder what % of Workstation are windows vs linux vs OSX

so it works better as expected

Tempted to buy the 2990wx but super on the fence.

Yeah, that’s a high price to justify. Personally, I won’t miss a review of that chip. If you want to touch the reviews and whatnot, I’d recommend a 2950x. Seems like what the vast majority of people will be purchasing.

Yeah, you got a screaming deal. I’m gonna have to keep an eye out for it to drop again.

eh nvm apparently in store only, set your store to web and the still show it SMH