This house circuit ANNIHILATES PC power supplies. What to do?

So I have now gone through three power supplies in period of four years in this house. The victims are listed below:

Since the two deaths I have bought 1500VA Cyberpower UPS and drawn a ground to the outlet from the washing machine earth. But this did not prevent the death of the HX1000i.

What often happens is that our house circuit gets overloaded by having two airconditioners. (30A is not enough) and results breaker being tripped.
I understand that this is not desirable for PC component longevity. But I was under impression that UPS will protect from that. The PC has not shut down even once due to this.

Also my 24/7 Thinkstation Server has not had a single failure.

Is this just a bad luck? I think 3 PSUs in four years is excessive though.

Also I wonder will Corsair replace the replacement part they sent, it says it is refurbished part.

My first thought is to start thinking more economically in terms of power. Have you considered switching your AC to a more efficient unit? Not only would it help with the power spikes, it would also help with the power bill. No idea if it makes much economic sense though.

Second, think about NOT running a 1000W computer maybe? You’d be amazed how much a 650W computer can do to keep up, even with the top end and especially with the next generation of Radeons and Ryzens - Where Nvidia will have a 450W card on the market the top tier Radeon seem to be around 300W, and Intel seem to be around 250W in top tier while AMD will have 170W top tier on the AM5 platform.

Third, try installing a 10 kWh home battery like a Tesla Powerwall and hook the ACs through that. ACs will draw power through the Powerwall when on, and when not the powerwall will charge up from the grid, which frees your 30A to other things.

Just a few different angles to approach the problem. As a bonus the powerwall will increase your house value.

Thanks for the good points. Unfortunately for my work I need to run Unreal Engine 5 and use the latest and most powerful graphics. I worked for Territory Studio in London before and their requirement to get the job was to have at least one RTX3090, but I know guys who have two or more in their stations.

Home battery sounds like a plan. I wonder is this feasible for apartment? I wish I lived in my own home, but doubt I will ever get there

What often happens is that our house circuit gets overloaded by having two airconditioners. (30A is not enough) and results breaker being tripped.
I understand that this is not desirable for PC component longevity. But I was under impression that UPS will protect from that. The PC has not shut down even once due to this.

You are correct. The UPS is basically providing “clean” power and protects against power spikes, so even if it is tripped it should protect your PSU. I think your third PSU was just bad luck.

Home battery sounds like a plan. I wonder is this feasible for apartment? I wish I lived in my own home, but doubt I will ever get there

It is feasible but would require the cooperation of the landlord in this case. I would talk to your company about it and see if they can sponsor part of it, or even buy the entire equipment if the landlord is unwilling to foot the bill (understandable).

The reality is, not every home is built for a massive 1000W computer. Here is an overview of powerwall alternatives that you might investigate further, this heavily depends on where you live. 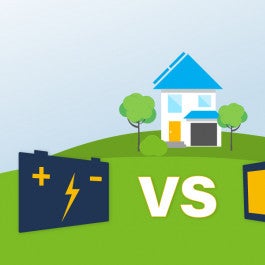 Tesla Powerwall rules the market—but is another brand better for you? Read the pros & cons of its top competitors — each of them has some great features.

Good point, exactly. Not not every low cost Japan apartment is built for 1000W computer, very much indeed so.
And what I hate about my job is that I fall into such tiny minor niche here. Even CG artists here do mostly non-photoreal stuff with their ten year old laptops. I just visited Osaka company and they still use pre-RTX machines with older Intel chips, they cant even run Unreal Engine 5.
Those who actually know what they are doing (not talking about myself) do that thing in companies which have industrial level stuff.

There is this I found; but I dont know what this actually does

There is this I found; but I dont know what this actually does

For your use case an online/double conversion UPS is a better fit than a portable power station. They are designed to smooth out voltage fluctuations and transient surges by converting the AC input power to DC, then back to AC again. It will give your equipment a nice clean sine wave if input voltage is your problem. Also the UPS batteries will be user replaceable lead-acid whereas the power stations will be proprietary lithium.

Maybe look into something like the unit below. I’ve used the rack mountable version and was quite happy with it aside from some fan noise.
https://www.tripplite.com/smartonline-120v-1.5kva-1.35kw-double-conversion-ups-tower-extended-run-snmpwebcard-option-lcd-display-usb-db9-serial~SU1500XLCD

My thoughts are you didn’t say what model UPS you bought. There are (or were) several 1500 models and not all are made equal. Stepping can kill a PSU or at the least it will just die on power fail like you didn’t have a UPS at all. Some PSU demand you have a “Pure Sine” UPS. If you have a stepping model the PSU might just get beat up because while UPS are “supposed” to condition the line and switch they have delays and they aren’t perfect leaving all those little millisecond windows that can kill a PSU over time.

My house is littered with UPS’s due to being on the same grid as all the industrial plants in town. I can have spikes or brownouts and you quickly see which UPS’s caught it, which failed to act fast enough and which devices are most susceptible to the switch (or lack thereof).

@Four0Four Tripplite used to be all the awesome 20+ years ago but over time I grew very weary of them. All mine started dropping like flies and replacements maybe made it 1 or 2 battery changes max before they’d freak out. Their displays would flicker or not function at all. They’d randomly start beeping or screeching and they sure wouldn’t switch to battery on AC fail.

Sadly every brand has lemons and I’m sure we’ve all had bad experiences with even the best brands but UPS’s are kind of a scammy device. I was following an Open Source UPS project a while back but it’s yet to really manifest anything of worth.

Have you considered looking at a power conditioner?

Tripplite used to be all the awesome 20+ years ago but over time I grew very weary of them. All mine started dropping like flies and replacements maybe made it 1 or 2 battery changes max before they’d freak out. Their displays would flicker or not function at all. They’d randomly start beeping or screeching and they sure wouldn’t switch to battery on AC fail.

Yup, won’t disagree with you there. I think all the consumer standby UPSs are garbage these days including Tripplite and APC. But their online UPSs are actually pretty good quality. Where I last worked we used their 3000VA models in radio towers and never had the first one fail; but we did replace them for good measure during each equipment refresh cycle (5-10yrs).

Online UPS is what you want as stated previously. Eaton, APC, or any reputable company should be fine but you will probably have to get a rack mount unit if you want a top-quality one.

Yeah sadly rack + commercial are about the only 2 things that step into the discussion. I know for a while I was looking at having to step my nema game up because the good units weren’t doable with standard nema5.

Sadly for the OP this is probably a cost/time evaluation where PSU say $300ish per year OR $5000ish new panels, different Nema standard to run some nice rack mount UPS + battery replacements over time…hell the batteries can often cost more than a new PSU heh. So unless the PSU death takes the whole machine with it just let the PSU die haha.

Just one question, I am currently on my last PSU and I need backup because I am just waiting for this one to die next.
I wonder should I just ho ahead and get like insanely good one like 1500W? My client work can’t wait and one day offline will cost more than the most expensive one out there (non industrial ones)
Don’t they have like insane black diamond rated ones with solid gold wires and carbon fiber kevlar casing?

Don’t they have like insane black diamond rated ones with solid gold wires and carbon fiber kevlar casing?

Define insanely good one
Only you can know if 1000VA will be enough for your workload (I’d say no, given your description)
Apart from that, solid gold wires won’t get you anywhere, reliability and stability of the inverter output will, plus serviceability and long term support.
Hence the suggestions here to go with a universally well known brand like tripp-lite or smart-ups, for which you will be able to find replacement parts 15 years from now (likely the batteries)

Just make sure you get an UPS that always provides output from the inverter in a rectified and clean way, so the smart-ups line from apc will be perfectly fine for you.
One note: while the rackmount versions may sound like they are a better fit for your requirements, make sure you understand the noise level they will be generating versus the desktop ones (e.g, they will make a lot of noise). Same goes for anything over 1500VA, they will probably have fans, always on, very noisy, especially if you go for the 3000VA units …

If something external is killing your PSU getting something overkill won’t really help unless all previous PSU were trash dealing with ripple and flux. You will just be wasting more money. If your machine needs 1500W then get a 1500W but other wise it’s just waste for the sake of waste. 1500W is also the top end of residential Nema5 wiring so…waste unless your machine needs it. Which is me saying your wording kinda sounds like you are equating watts with quality.

If you’ve had several PSU from different brands all die then unless they were all ali express bought odds are likely you’re just setting up lambs to slaughter so get the wattage your hardware needs with decent quality so it trips/dies with minimal collateral damage and just keep buying those “not crazy” PSU until you figure out the external issue.

Also I was going to ask if you had tried another plug, room? I’ve had situations where I ran Extension cords from other rooms because the panel was set up stupid and while it looks ghetto/trash it might be your fix.

Outside that rather than spitballing vague things here it would really make more sense since this sounds like money is going to be spent/wasted either way…contact an electrician ASAP. If your panel has a few open slots maybe he can toss in a separate breaker for the cost of a PSU.

@MadMatt Yeah gold is a gimmick. It is better for some situations, just never the ones they advertise it for.

Ah, silly me, then go ahead with gold wires, sparkling connectors, RGB leds and whatnot … or go for one that has a PSU SMBus Header and get some data out of it …

Good luck in your adventures!