Thinking about building my sister a new pc

I think its time to build my sister a new pc. 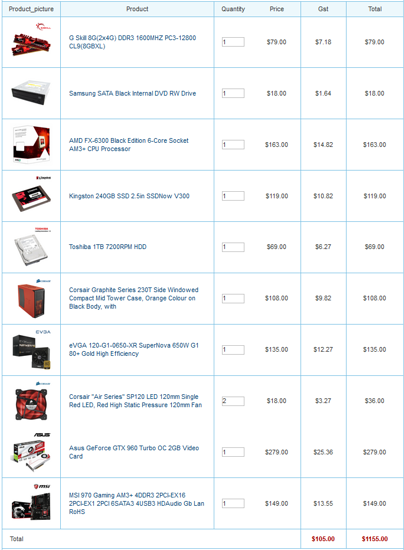 + CPU Cooler will be my old H60 with the above SP120's due to original fan being broken.

Changed it to a HyperX Savage 240GB

Ended up pulling the trigger after changing the SSD just need to pick it up now.

You coulda gotten a decent faster system overall, especially the 290 and i5, the 6300 isn't bad for gaming exactly, but at that budget an i5 is better

The only thing I would say take a shot at is a 500 GB HDD. I can fill 320 GB's with just my games library alone and it isn't that big (of the games that I play at least). 320 just feels too..... small, O guess. If you can't buy one, scrap one! Obviously new is better but I have scrapped laptop HDD's before and never had problems. Obviously this is subjective but thats up to you really.

What does she do with it ? A SSD for the OS would give the PC life again/

The new system is built, sorry don't have pics yet - it looks awesome though.

The main reasons I opted for a whole new system instead of upgrading various components are: