The Work From Home (WFH) Thread

I’m a laptop pleb, I built a semi-standing desk with 2 ikea lacks (just glued the 2 feet together to make a taller one and only used one table top). I can use it both in a standing position and on a slightly taller chair, works out quite nicely (and it’s dirt cheap). I also built a Lack Rack holding 4x 2U server cases with 3 desktop components inside them (one being my pfSense box), 2 small UPSes, my ISP’s router and my wireless AP, but that would be a story for another time. And whenever I want to lay back on my chair, I got an ikea Brada laptop stand that I use between my chair’s armrests. Of course, cheap doesn’t mean it looks too good (I mean, it’s decent), but it does the job.

If you got a desktop, you could probably get away with just a Brada and a normal desk, with a raised monitor (or a tall monitor stand). Whenever you want to stand, just put your keyboard and mouse on the Brada and you’re good to go.

I’m a fan of DIY, but I don’t have space (really crowded in my studio apartment). If I had problems, I’d go to a car graveyard, get a quality chair and DIY a stand for it, they are made so you can drive for hours, they actually work great as a chair desk (and you may find them for almost free or free). My future setup, if I’m going to have a desk at all, will have a car chair. Otherwise, if I’m going the slightly minimalist route, I will get a coffee table and a bean bag.

From this and my previous comments, you probably realized I’m a man with low time preference and a cheapskate (well, it ends up working well for the environment, but I don’t actually care about that), so I’m ok with building stuff out of junk.

I also built a Lack Rack holding 4x 2U server cases with 3 desktop components inside them (one being my pfSense box), 2 small UPSes, my ISP’s router and my wireless AP, but that would be a story for another time.

Now is a good ‘another time’. I like racks, and lack racks.

If you did it, tell us how it went, I’d like to know if youtube works on a 4K screen with 720p video playback without (too many) frame drops. Also try the Youtube with VLC network streaming if it a browser doesn’t work too well (I’d prefer Firefox, do not feel like touching chromium). A Kodi YouTube plugin would probably be the best, but not gonna request it if you don’t want to. Your experience may influence my purchasing decisions.

pi 4 with a SD card? unusable. on the desktop.

It’s a lot more powerful than I expected. I’d put it on par with an Athlon 3000g or so.

It’s definitely not going to win any benchmarks, but it gets the job done.

The only issue is this: video playback works fine if that’s all you want to do. So don’t expect to just let youtube run in the background and be fine with it. I’m not sure what it is, but at 3840x1600 with playback window approx 480p, it was dropping a couple frames and system load was 2.8. A bit higher than I’m comfortable with, given that if I need to do anything else it starts dropping frames like Michael J Fox trying to juggle.

Aside from that, pretty much all the tools I needed were available on Manjaro ARM, and it had a great OOTB experience. kernel was solid, drivers were all there, wifi just worked, wired just worked. If you only have $100 and you need a computer, I highly recommend the 4GB raspberry pi 4.

Am I still using it as a work machine? No.

I think it falls short in the GPU and storage departments. USB SSD is nice, but interrupts cause storage access to use a lot of CPU.

What I’d really like to see is a rockpro64 with a bit more GPU. And proper first-class mainline kernel support. The rockchips are still a bit iffy, I’ve found. (in the last week, I’m down 2 rock64’s and AdminDev is down a rockpro64)

But then we’re moving away from SBC and into desktop class. 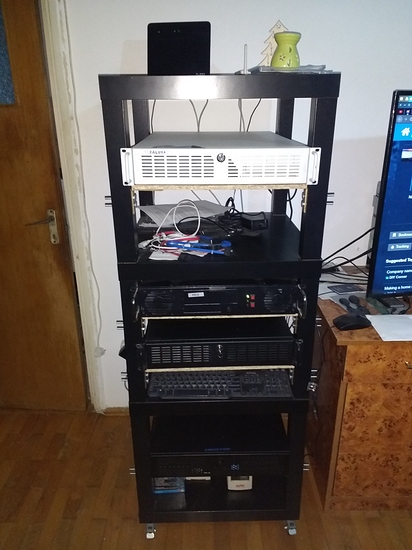 IMG_20200407_1947313323120×4160 2.32 MB
Going top to bottom there are:
Salusa: the pfSense Box
PS12: my PC running Manjaro and a Windows VM with hardware passthrough
The unlabeled one: an old PC running Windows 8.1
The last one (Truster) is an empty one, I need to mod it a little to mount a PSU inside it without it vibrating, because it had one with a reversed fan to draw air from the front and eject it over the top of the motherboard (not straight to the CPU, but over 2 trays that could hold 4 HDDs). 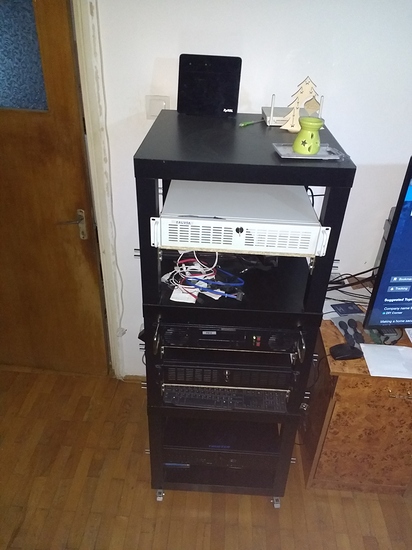 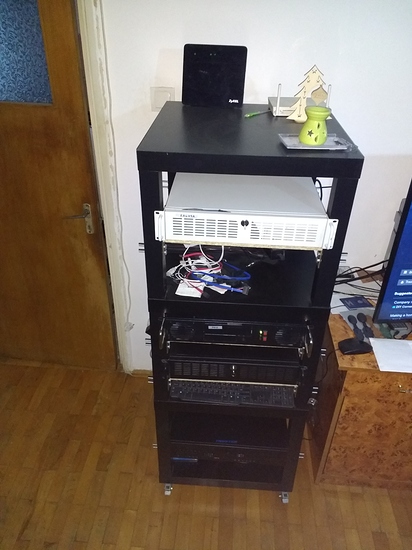 IMG_20200407_1947502253120×4160 2.43 MB
Cable management is not my forte here, the only ones I managed (which can’t be seen well in the pictures) are my power cables coming from my UPSes, there are 3 cables well tied to the right leg going to each PC. The ones I couldn’t manage are the USB cables (I got 2 powered USB HUBs), network cables and HDMI cables. The keyboard and mouse are there because a game refuses to run without detecting them (I play with a controller). Some random stuff all over the rack (it’s a dual-purpose shelf) and at the bottom, my 2 APC UPSes keeping my TV, PS12, Salusa, ISP ONT and AP alive, with the last PC being just on power surge (cuz it sucks quite a bit of juice, even though it’s not that powerful, it’s just old). I use those on my TV that you can see a part of in the first picture. The servers are pretty silent, I sleep with them powered on, they are on 24/7 and until today, I had 129 days uptime on my pfSense box (I had to reboot, because I updated to version 2.4.5). 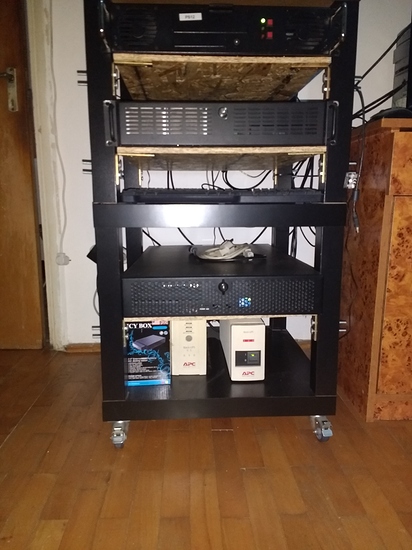 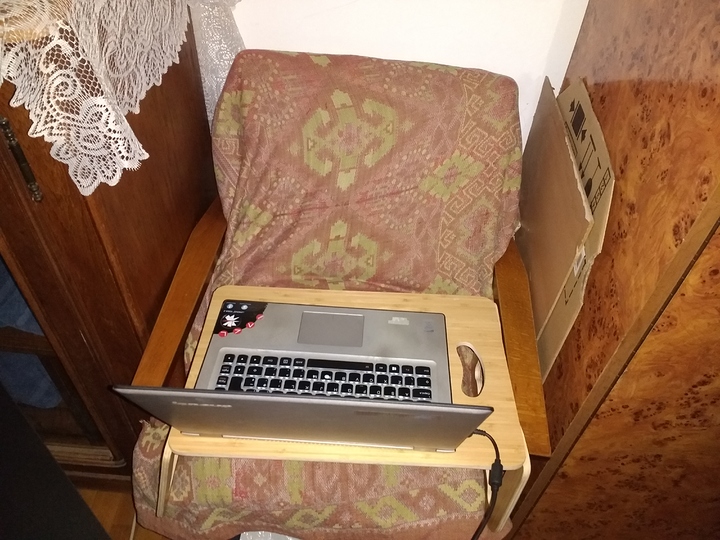 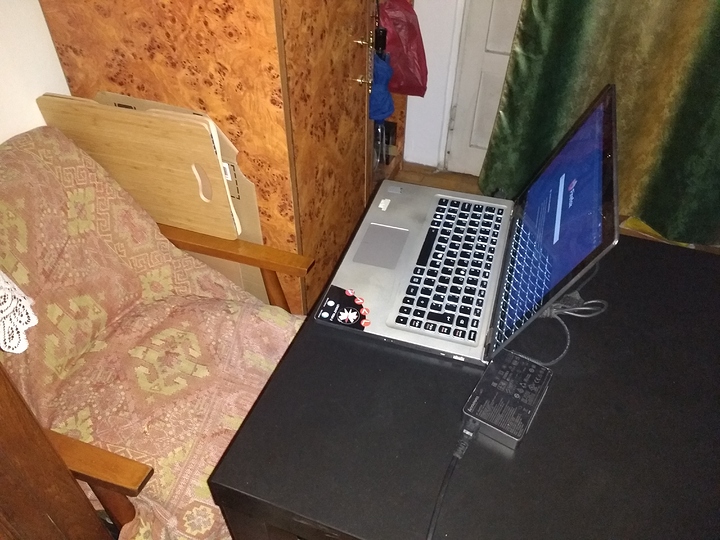 As a side note related to the topic, wfh has been taking a toll on my sanity. And not because I like going out (I’d stay home at all times if I didn’t have to buy food and other stuff), but because I hate WFH. Sure, it’s good that I don’t “waste” 2h a day on my commute (it’s not a waste for me, as I love listening audiobooks on my way to work and back home, I haven’t listened a book in a while), but being able to concentrate in just 1 room (again, I live in a studio apartment) is really hard. The good part is that I never used the table for anything before, I just had it because I bought too many Lacks when I built my Rack, but it managed to be quite useful when working from home, because that desk is dedicated to work now and I try not to leave it too often, just change positions and sometimes stand, during the 8h of work (I do take breaks to hydrate and at most 1 break to eat).

@SgtAwesomesauce Thanks for the small review. Yes, I only use my current PC (the PS12 with Manjaro mentioned above) just for Firefox, Thunderbird and LibreOffice Calc. It has 3GB dedicated to it (and 5GB to the Windows VM which is also powered on 24/7). A RPi4 would probably be enough for my needs, although I open quite a lot of tabs in Firefox, my usage is not too bad 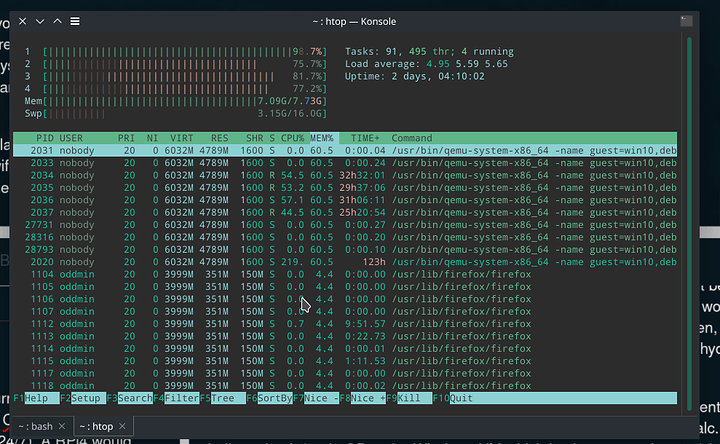 I’m currently using Manjaro KDE in KWin_Wayland session, which uses around 1GB of RAM at boot. On a Pi I would probably just go back to JWM and if it works out ok on the Pi 4, Void Linux (I love Void with JWM on my RPi2, but that thing was struggling even with Kodi on YouTube, it was unusable). I would probably strip my 256 GB Adata XPG SX 8200pro (that Wendell reviewed, I bought it thanks to him) and buy an USB M.2 NVME enclosure for the Pi. Not sure if any other cheap SBCs would work fine with Manjaro or Void and be cheap enough. The Pi seems the most supported SBC, is cheap and doesn’t use a lot of power. For $100 I could probably buy an old laptop without a battery or screen and use that on my TV, but it would use more power than the Pi and be more than what I probably need for a browser, a mail client and a spreadsheet.

For real, I need a different chair for WFH. Literally getting butt hurt over here.

I straight up get lower back and hip pain from sitting so much already. I have a bulged disc in my back because of it. For real, a good chair and desk work wonders (so does physical therapy)

I need to do this. I’ve been getting up randomly and walking, doing some push-ups. But time to get serious, stick to a plan.

I adopted this from a BMT trick from the military to meet the pushup/situp standards. If you can stick to it and doing 3 1x3’s for an exercise you’ll see some great results in a month or two

So enjoying the commute. GF and i haven’t stabbed each other yet (things are great!) so that’s a pretty good sign

saving over $150 / week in coffee/food and fuel… never mind servicing and general wear and tear on the vehicle.

[REDACTED] My dumbass left my email up…

Y’all’s desks are well too cluttered. This is my poor machine that’s put up with my torture for ~6 years.

I can’t put my finger on it but I really dig the screen setup, and its overall clean but not over-the-top “built” like its supposed to be in a RandomFrankP vid.

I think it’s that no two displays are the same?

Kinda functional like “I had this monitor, it worked well, so when I bought this better monitor, I kept the original.” got a bit out of hand and now he’s got 4.

Pretty much. The portrait monitor is the original. The right and top ones were gifts/hand-me-downs. And eventually I bought the center 1440p as the center piece.

It’s very much evolved over these 6 years.

And strangely I like this lack of symmetry when I usually like symmetry. Usuall lack of symmetry looks just like you said, and it looks bad cause its clearly just thrown to togehter- but this setup almost feels like it was all evaluated and built up that way for use-case. I donno, I guess just very well mounted so it doesn’t look so “I have a jbod of monitors all at funky heights and offsets” look.

I started to remove the 2nd monitor and mouse from my desk after working hours. It helps me to mentally detach for the rest of the day.

It helps me to mentally detach for the rest of the day.

I usually go for a run or walk after I stop working at 16:00, works surprisingly well to get mind away of work related stuff.

That’s great. I should totally add this to my regimen.

I fortunately have a dog, so I walk him right before work but afterwards it’s the soon-to-be wife’s privilege