The Witcher 3 has downgraded graphics

Thank you for the heads up.

Just have to wait and see. Though without the original specs of the original screen shots and a comparable comparison, there's nothing to say about anything new.

I doubt my machine will be able to get to high with the settings.

I sure hope the downgrade is not really a thing, because this is sure to cause a shit fit due to the insane hype over this game and the "need to upgrade for witcher 3" mentality that a lot of folks adopted.

I don't understand how anyone can tell when they are watching video's on You Tube etc that are compressed and therefore downgraded! Unilyou see the game with your own eyes, it's impossible to tell!

This should solve the problems with compression.http://forums.cdprojektred.com/threads/21144-Video-Download-Center-for-TW3

If it was downgraded and can be fairly hard to tell. For the initial review I'm sure they used a super powerful PC to make it look the absolute best. Most of us can't get that same result of course.

EDIT: I do see a minor downgrade, but I just assumed it was because a lot if it was console footage, but I could be wrong.

I would rather have the graphics downgraded and run better than have it run like a turd and look amazing. Also, its a Witcher game, its going to look good. I don't think you have to worry about the game looking bad. You should only be worried about how well it runs.

Also, you should never trust what they show you at E3 to be real. Almost all games shown at E3 have dramatic changes by the time they release. Example? Watchdogs.

Not sure if been posted yet but from over on reddit, take with salt twice daily.

EDIT: It is supposed to be from an anonymous developer at CDPR, it says as much i the article. 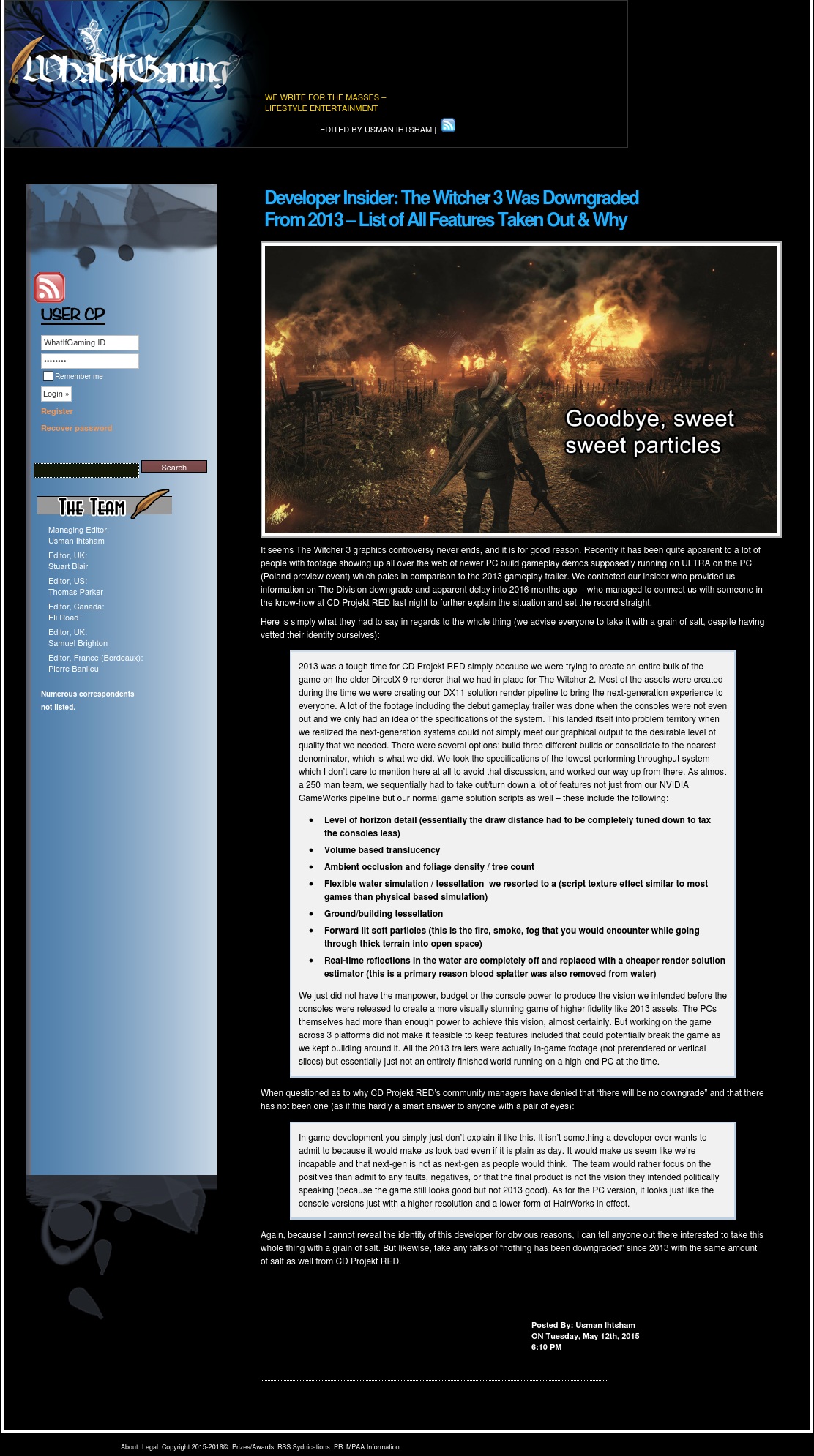 That sounds very accurate to me.

It still think this whole discussion is bloated and useless. All the comparisons are with an old 2013 in-game (NOT gameplay) trailer and with a mix of screenshot from different platforms in different lighting.

They have been showing actual gameplay trailers every 3 months and they look great even though not exactly the same the 2013 trailer. Why did this came up now even though they have been really open with the state of their game the last 2 years. Why is everyone comparing a non-gameplay with a gamplay video? If the game launches and does not look the same as all those gameplay videos, then sure that would be a reason for shout and criticize. That is what happened with Watchdogs. But before that happens I do not get it.

It seems like people are trying to find the next Ubisoft/Watchdogs situation to complain about without even seeing the actual game first and they are overreacting.

I doubt it, CDProjektred, have primarily been a PC Gaming Developer. on top of that, people said the same thing about the Witcher 2, and look at how that turned out, that game still annihilates graphics cards. sure the game was more "Console" friendly, but it still took a lot to max that game out.

E3 gameplay trailer. This shows some of the major issues that I take with the current state of the game. The atmosphere is very deep and realistic thanks to the lighting and the water is very accurate and beautiful.

In comparison, this Ultra settings gameplay from the current game looks flatter and the water is much less realistic looking.

Things like these are the things that people are taking issue with. You might not find it to be a big difference or a big deal, but I have noticed the differences and I am upset about it. It seems to me that CD Projekt Red has gone from a pc only purist type of company, to just another game publisher, looking out for gross figures before anything else. The parity is real.

Well then quite frankly fuck CDPR for telling lies to us. I have no doubt most of this is because they want to console versions to be close to the pc versions. So yet again the tech from 2009 in the consoles is hold us back. If consoles would just die that would be great now. Still that does not excuse their behavior.

I really do not see any difference between the two videos. If anything the facial textures look slightly better in the second video.

The difference in atmosphere is because the environments are different. The first segment is in swamp...

I've seen this story before. The following are direct quotes from a CD Porjeckt employees

Yes, we've closed/deleted downgrade threads because after 600+ pages spanning across 3-4 threads and same things being repeated over and over again along with fighting it's simply too much and a lot of forum rules had been broken or bent, our job is to make sure they don't. Everyone has said their piece and there's nothing new to add.

This thread is going too, but before it does, let me just say why exactly are you believing BS rumours from some completely random website? They've literally copy-pasted things people are 'worried' over from the 2013 "Nvidia Effects" video. Reflections are still there, Ambient Occlusion is still there. It's extremely evident! The person who made that has ZERO idea about the tech they're talking about, just taking names and taking everyone for a wild ride.

The Witcher 3: Wild Hunt is the third entry in the Witcher series. The previous two games have been released on the PC and you can carry over your save fro

Marcin was quick to note that they don’t comment on such rumor but since the game is close to its official release, they want the fans to be the judge and play the game themselves.

Ok guys, I belive a word of clarification is required. These are just rumors, and as we’ve said before we don’t comment on such. Secondly you have to remember that our game is a big release – a lot of people have been anticipating it and quite a few would like to gain some publicity from it even when it means talking about things which are not true. Wild Hunt comes out in a few days and you will be able to find out for yourself if the game is up to your standards. We believe so – we’ve worked really hard for 3 years to deliver you best possible experience – we love The Witcher as much as you do. To conlude we’d rather have you focus on the game and the fact that it’s going to be in your hand in a matter of days. And one more thing – whenever we say something officially, we always put a person behind it.

As far as I'm concerned this topic is old and there is no real proof because not one of us has play the game on pc yet. Until I personal play the game, I won't believe any of this downgrade graphic rumormonger.

This reminds me when Battlefield 3 was in public Beta and everyone was getting pissy about the "downgraded" graphics when in actuality, all the fancy "Ultra Shaders" where disabled, even when you select them in-game and the game looked much better once the release version was released.

The fact is, the people making the "This is what this game looks like on Ultra" claims are not using the final version. Honestly, it looks like that this is the exact same case going on here.

"It's not even on the highest setting. We're saving this for when you
buy the game - we want you to get a bit of a slap across the face." The
rascal.
Witcher 3 GDC footage -Eurogamer 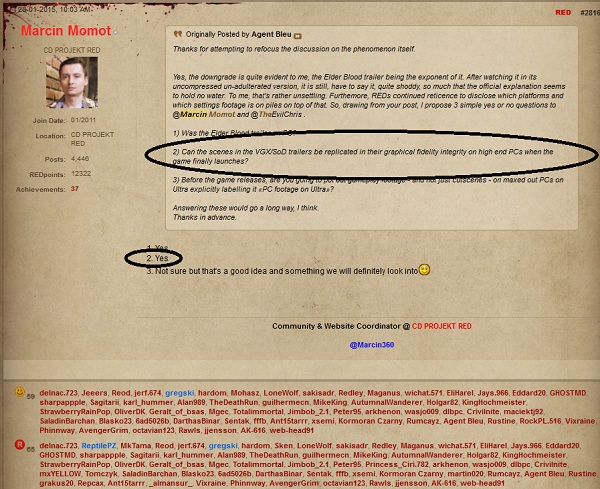 An interview with a CDPR Employee: