The Witcher 3 has downgraded graphics

It seems as though even the Witcher 3 suffers from E3-itis. When looking at comparisons of the screenshots, the atmosphere that originally drew me in with the trailers and whatnot is nearly non existent now. The lighting, textures, and tessellation have all been downgraded thoroughly. This wasn't what I was expecting from CD Project Red.

It almost looks like it Xbox One or PS4 quality graphics. This has me quite worried. Thanks for the post. Glad I got the game for free with my GPU.

Not this click bait again...The screens are mixed between Console and PC screenshots and the 2013 show case was PC early build. The PC gameplay videos from February (along side other gameplay videos they kept showing all this time. Its not that they did not show any gameplay since the 2013 E3 like Ubusoft did) look absolutely fine even compared to the trailer from 2013. Until the actual game comes out and we can see for sure the visual quality looks fine.

I will wait until the actual release before making a final judgement, but it certainly appears to me from the videos that I have seen that a lot of the lighting and whatnot that contributed to the atmosphere of the game which made me so interested in the first place is now gone. I certainly hope for CD Project Red's sake that there is no detectable difference between the pre-release stuff and the actual game, or else I will have lost all faith in them as they would have not only been deceptive, but would have flat-out lied.

Personally the last gameplay video I saw was the February 2015 one that I downloaded uncompressed and it looked awesome and compared fine with the old E3 trailers. And personally I really do not care how it compared to the old trailers. It still looks fine and atmospheric and I care more about how the game plays than how close it might look to a trailer from 2 years ago. There have been showing the game constantly so there no much space to lie anyway.

Further nitpick would be over-dramatic IMO.

The screenshots I've seen show a difference that is most definitely not nit picking. Everyone cared when it was Watch Dogs.

If its downgraded I'll be disappointed, but at the same time it supposedly takes a 4770k and a 980 to max the game at 1080p so I wouldn't be able to get them anyway. We'll just have to see I guess : /

Well will see when it comes out but so glad that I never ever pre-order a game.

As long as the gameplay is good I'm not worried about the graphics. It looks good enough.

From what I have seen from confirmed PC footage the differences are nitpicks imo. The game looks absolutely fine. Even if might not be exactly the same as the E3 trailer 2 years ago. Watchdogs actually looked mediocre.

Any trustworthy source reporting this?

Depends on what you consider trustworthy. These are all of the same screenshots, so I will try to find the actual source of this comparison.

People are referring to this link repeatedly, so I am guessing that this is the original upload. 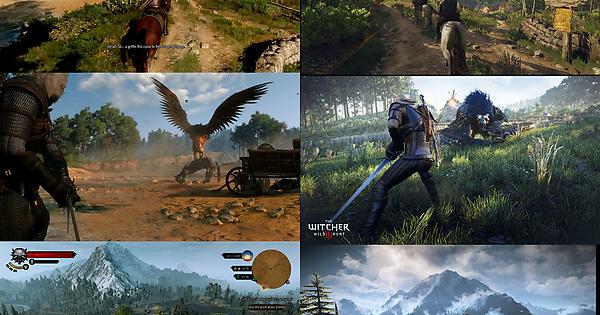 Here is a different comparison of the graphics. It is hard to see a lot of the things that are pointed to as the problem (namely the grass and the draw distance). What you can see is the thing that I have been harping about this whole time is still true of this comparison. The entire atmosphere of the game looks and more importantly feels completely different. It just seems flat. It goes from the cinematic look and feel of the pre-release to something more akin to Skyrim.

The Witcher 3 Wild Hunt is just a few weeks away from its official release now. It is currently being previewed by various media outlets and as the game we

One of the shots came from this site. Seeing as how they are showing off the graphics here (namely PhysX stuff), I would imagine that it is safe to assume that this is the maxed (ultra) pc settings.
http://www.worldsfactory.net/2015/05/05/first-the-witcher-3-screens-showing-nvidia-hairworks-hbao

I would love for someone to find me some final build footage/screenshots which show the depth and atmosphere that we got with the pre-release stuff.

CDPR did invite a lot of gaming personalities to Poland to play it recently, so I'd imagine it's not exactly a secret how the game looks currently.

The most recent PC footage that I can be relatively sure is accurate PC footage are these two (besides the one above):

The second one especially has a link in the description that you can download the uncompress video. It is huge but looks stunning.

The only real difference I can see with the old trailers is that the draw distance is a bit lowered and thus you see some pop ups here and then on Vistas. for me if it means that the game runs smoother is really not a big deal.

These are my benchmarks as far as I am concerned. We will see what the actual game provides.

In the videos that you posted, you can see the problems that I have been pointing out. The grass looks incredible flat and one dimensional. The textures in general, specifically the ground and the straw roof textures look flat and unrealistic. I will look into this more later on and like I said before, I plan to withhold judgement until the game is actually released and I can get some hands on. Until then, I am just pointing out what I see. I think that if you look at some of the screenshots in teh before pictures that I've linked to, and notice the detail in things like the water, reflections, and textures, that you might see what it is that I am talking about here.

I remember reading something somewhere from the dev said that the youtube compression destroyed many details.

it also highly depends on your system specs... what they've shown first most likely were on some super pc's.
Right now, they try to show how things look for more normal hardware. (also most likely newest trailers were for xbone and ps4)

I remember reading something somewhere from the dev said that the youtube compression destroyed many details.

So much, it is absolutely terrible.

This should solve the problems with compression.
http://forums.cdprojektred.com/threads/21144-Video-Download-Center-for-TW3

Anyway, I am still seeing a big difference here with the lighting and reflections and whatnot. I guess that I will have to wait until launch for any kind of final decision though. Still, it seems very strange to me that more peopel aren't concerned about this.