The Thermodynamics of Water in a Personally Designed Setup [Let's Talk Watercooling!]

This thread is basically intended as a watercooling megathread. Looking particularly at the custom loops, but if you have a H100i or some other closed loops system, you are still welcome to chime in.

Anyway I wanted to kick things off. As a precursor to this post, I would recommend going to my profile to check out my system specs.

I'm currently on air, however in the coming months I really want to get my CPU and GPU in a custom loop. I've tried to plan it out pretty meticulously, however this will be my first time watercooling, and as much as I'm all for learning from mistakes, I really want to nail this first time, in the same way I believe I did with my system. So far, I'm looking at the following list of parts, with the GPU block ordered internationally because my bloody GPU is non-reference and not the most common card around, and I would much rather a full block. (The LED fans are to just put in my system, not on rads)

I also plan to have it in the following configuration: 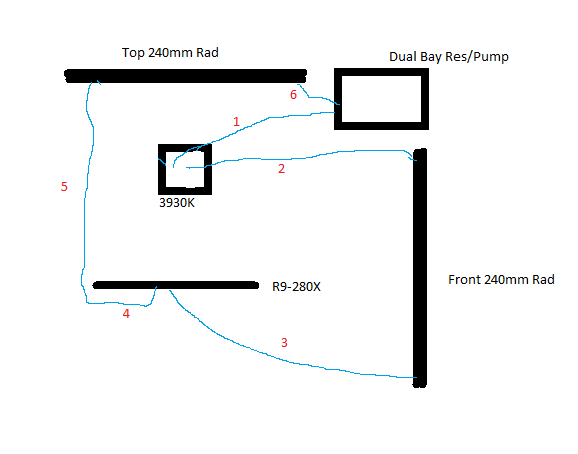 I would really love to here any thoughts and/or advice, because as I said this is my first time watercooling.

Well, radiators are generally not single-pass linear-style like you have depicted - usually, the inlet and outlet are on the same end, which would change your loop a bit.

Try to make it more compact:

As you see (thermodynamics work in this way) The speed of fluids is so grate that delta temperature in variuos parts in the loop is MAXIMUM 2-3 degrees of celsius. So making it more comepact is making more sence rather than looping everything in certain way.

Yea, but I'm getting the crossflow model radiator, unless recommended otherwise.

Yea I understand making the loop shorter means that it will be cooler, but does it not make more sense to pass the coolant through a rad between the GPU and CPU?

the other difficult thing is that the GPU waterblock only has the inlet/outlet on the bottom side, which is certainly not ideal, hence the 2 90 degree fittings.

Like Aru said, the speed of the liquid in the loop is so great that the order of radiators becomes negligible. It is better to minimise the path that the liquid takes than to have an alternating radiator setup.

Okay, so should I look at going with just the regular EX240 rads? and what are the EX series like? obviously not extrememe performance, but suitable for my use?

I came up with this layout, the two runs in yellow are the ones that I'm really not sure how I'd route, as (like I said) the inlet and outlet on the GPU block both face downwards as illustrated. Would it make sense to have a crossflow model in the front, so I can run from the GPU to the bottom of the front rad, then out the top into the res/pump? 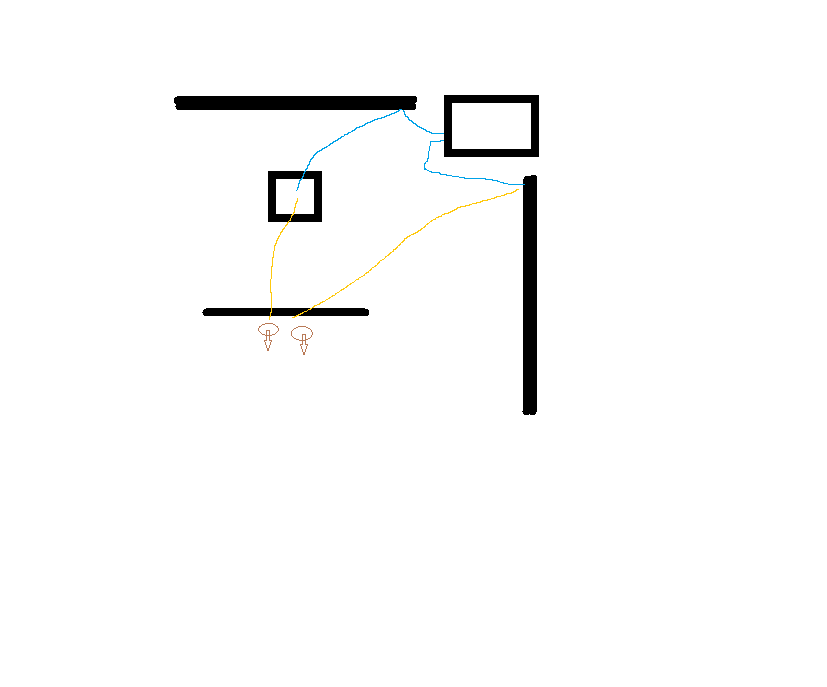 Aru the issue with your run is once again the location of the G1/4 threads on the GPU block. They are both on the downward facing side.

The XSPC EX240 radiators aren't really thick (about 35 mm) and thickness is something you want from a performance radiator. It depends on how much clearance you have between your case and the motherboard. The top radiator won't have much clearance compared to the front radiator so maybe use the EX240 for the top and a thicker radiator (45 mm to 60 mm) for the front if you can fit it.

Good point, the Arc midi R2 does seem to have pretty reasonable amount of space in the front, So I'll check out some thicker 240mm rads right now, unless you have any specific suggestions.

I like Alphacool radiators but they are quite expensive. If you have an 80 mm clearance for your front radiator (not sure if the Arc Mini R2 does), get the Alphacool NexXxos Monsta 240 mm radiator. If you have less clearance, maybe look into the UT60 or XT45 series radiators.

Yea, I took some measurements and eyeballed some stuff, it looks like things will be squeezy up top but because the case is slightly wider, it should work out. as for the front, the HDD cage is pretty inconvenient, but it would seem a 45mm rad would be the way to go.

Yea, don't see why not, still only solves half the GPU issue. I'm also unable to find a dual 120mm rad that's thin enough for the top, my dam motherboard heatsink looks as though it won't agree with any setup bigger than 45mm thickness total (including fans), however, I might be able to get around that.

You could get a 30 mm top radiator if 45 mm is too thick. With the other GPU thread I'd say you'd have to use two 90 degree rotaries and maybe an extender to get it to reach around to your CPU or top radiator.

Yea that was my thinking, so I included that in there. After more measurements and eyeballing from the top, it looks as though the top rad fans may actually just miss the MB heatsink, but I'll look at it again when my brain decided it wants to function properly.

Here is a solution maybe?