The swedish ISP Bahnof reports in a press release that the Swedish government is preparing to setup a filter that will block IPs for foreign gambling websites.

The Swedish government owns a company called "Svenska Spel" (Swedish Gambling) that conducts lotteries, run casinos, bingo halls, internet poker and more and has a return on around 580 million USD per year. They do not have a monopoly any more but the market is regulated and now when a lot of people is gambling on foreign web sites, the government wants to introduce a licence for other companies entering the market and others will be blocked out using the internet filter. The excuse is of course that it's for the sake of public health...

Translation of the beginning of the press release:

The swedish government is on the way to for the first time force ISPs to filter the internet.

The new gambling investigation is officially about that the government "wants to introduce licence to let more actors in on the Swedish gambling market". But the ones who don't get the licence should be closed out "in an efficient way" – through an enforcing IP-filter that makes it impossible for regular users to reach the websites.

– The investigation time is very short, writes the governments investigator Håkan Hallstedt in an email to Bahnof.

– This violates an important fundamental limit that will have effects in a number of areas, says Jon Karlung, CEO, Bahnof.

In my opinion, apart from betting on real events, and playing against other real people, online gambling shouldn't be a thing. It's fixed to a point where the company is making a ridiculous amount of money from people who are throwing their income away.

And then, when you get into debt the governments comes and makes sure it get's paid back to the evil company.

I wouldn't say that online gambling is the sort of business that I want to support but I don't think it should be banned and there is no way that the government would ban it even if they could since they make so much money of it. If they actually care about public health wouldn't it make sense to not enforce the collection of debt from addicts? It's a completely transparent double standard from the government.

I am not against a regulated market but it's obviously not what it is about, I don't think it's the governments job to run casinos, lotteries and online poker etc.

A government protecting the people who elected them.

I have no problem at all with such a filter as ripping people of is wrong on every level.

Me neither, but I am against censoring. If they start by censoring this, then they will begin censor other stuff aswell. And in the ends we vill end up with an internet like China.

I don't necesserily agree with censoring the internet. There are other ways to combat the problem, without doing so. But they take a lot more time and resources, and the government probably wants a quick fix (which probably won't fix it). 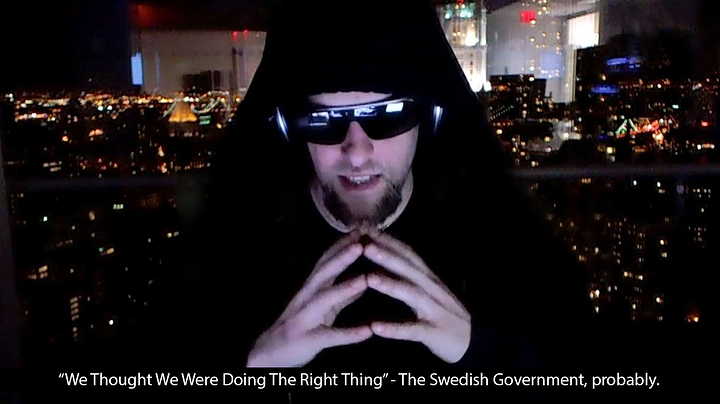 @CrossCarbon As I stated in my previous reply it's obvious that they do not care about public health, the government earns 580 million USD per year on running gambling.

@Baxtex Agreed. You need to draw the line somewhere and you need to hold tight to it, you can't just let them move the line further and further forward with small steps each time.

I have no problem at all with such a filter as ripping people of is wrong on every level.

However, thats not the real issue.

Forgetting the fact that these filters dont actually work, the real problem is scope creep. If you look at the UK, the government has implemented a number of "filters", the original was the Internet Watch Foundation (IWF) which was meant to block child exploitation sites and the like. The reality is this is an unregulated organisation who deams what is and isnt allowed, its scope is wider now than just blocking child abuse sites, the organisation its self is highly questionable in its legality by doing what they are doing (viewing those sites), they do what they do in secret, with no notification to those they block this has lead in the past to legitimate sites being blocked by them.

Of course now that they've been around a while, its set a precedent for monitoring and filtering what people in the UK are allowed to see which has led to the latest iteration of filtering.

Currently opt-out though i think the plans are to make it mandatory eventually.

Unfortunately government don't seem to be able to understand the internet at all. Im not saying that its not needed.. but ive yet to see it implemented properly and without abuse.

I hope my English does not turn this into a unrecoverable mess of words taken from any possible language.

Governments are meant to represent their people. For some reason the world became more and more complicated. As evolution is not part of this topic, I will cut here.
There is a circle of constitutions. While freedom of anyone gets higher up to a certain point, safety of anyone lowers down to "survival of the fitest". In this case, I will use fitest to describe the individual having the best chances of survival. As chance is the main factor for evolution up to this day, I think that works out in my case.
Just to recap: We got into a complicated world of systems hooked together in bigger systems. One sub-system is a government of a piece of land that defines itself as a country. In an ideal world the government takes away as little freedom (=privacy) as needed to keep up maximum of safety (=as little casualties as possible, idealy 0). I have no evidence, I will have to guess now. Lawrence Kohlberg has made a model of six levels. As the average is level 4 in said system, the government is working on said level. It keeps itself and other alive and working to keep itself alive and working. It is that simple.
Most natural event (I will not call this failure as it isn´t in my mind): The average lowers to level 3. The systems get smaller as the average person can only relate to less people as before. Countrys turn on themself more than careing about others. By my understanding, a person on level 6 according to Lawrence Kohlberg would watch the world burn. They would die because they have to. No reason needed. Level 5 and the last level 4 people would claim the system needs to stay "online" as it was working before.

Real world: People change, not by biological evolution but by cultural evolution. The romans were different then any culture before and after them.
Monarchy, Aristocracy, Democracy, Monarchy, Aristocracy, ... The system will keep like that or the people will change. As we saw many cultures or at least their remains, we can be sure culture is not the cause. Humans will have to evolve biologically.
To keep the democracys with its complicated systems alive for as long as posible, people need to have paths. Like sheeps. One needs to show them their path. Level 3 as stated earlier. For now Sweden has figured out, leading their sheep into more safety by taking away some of their freedom will give them overall better fitness.
Survival is hard. So we are selfish. When it is better for our species to form groups of males and females, we will protect them.

Off topic note: I just watched ExMachina. The film works for this topic in a way. Speaking for the German version, the film was good. I will not tell anything about it as I went in without any knowledge about it. BlueRays can be watched over again. A self-maintaining system leading to spread of ideas worth sharing.

the system they introduced doesn’t work