The NSA and my new Laptop

My new laptop is being delivered and has made a few stops along the way to me such places as SACRAMENTO and STOCKTON CA but the last location it has shown up in is DUGWAY, UT 84022.

I thought why Utah maybe FEDEX has a large airport shipping HUB there and that is why its off in the middle of nowhere, I looked on google maps and it seems to be a little town in the middle of the desert.

What else is in Dugway Utah well the name sounded a bit familiar so I done a search with "NSA" and "DUGWAY, UT 84022" and low and behold its the location of the new NSA data centre that I seen on the Intercept.

Should I be worried, well I am already I am a Linux user and that makes me an extremest in the eyes of GCHQ, I will have to perform numerous counter surveillance measures like erase my HDD Firmware and check the laptop inside out for strange electronics.

Is there any other measures that can be taken to insure my privacy has not been compromised?????

Yes, you should be very concerned.

Every laptop a US citizen buys online, goes through the Patriot procedure. That is they are sent to NSA, rigged with several satellite tracking bugs, and their root-kit installed on the hard drive's boot sector, ensuring total and complete access to your device at any time.

You should have bought it at Frys, mate. NSA don't bother with those.

@Hostile If that is sarcasm, it does not convey. If it is not, you guys are half a step away from the need to restart the US at year 0

It's satire. A good piece of satire should convince you that what you're reading, is the authors true belief/intent.

Since you couldn't distinguish if it was, then I would say, mission accomplished.

I think everyone here needs to just sit back, have a tea, and relax.

First, @CrossCarbon said something very logical.. @Hostile just read a bunch of words and immediately assumed the absolute possible worst without even seeing a screenshot if what @corncobb said was true or if he was having everyone for a joke.

Second, even if it is true that the package went to another facility, it doesn't mean what @Hostile said.

Every laptop a US citizen buys online, goes through the Patriot procedure. That is they are sent to NSA, rigged with several satellite tracking bugs, and their root-kit installed on the hard drive's boot sector, ensuring total and complete access to your device at any time.

And finally, everyone should watch a comedy and disconnect a little bit from whatever you've been reading/watching lately. It's very healthy to turn off the electronics on a nice day.

Enjoy some nature, play some sports, go for a walk, that kinda thing...not everything has to be done on a computer you know. Just the other day I went sight seeing and learned some history about the area I was in...I did it just for a change and to pass on some information to another generation first hand one day...was a lot of fun and even got a corny souvenir.

That is very odd. We do have an air strip out at Dugway but from what I understand it is not used by companies. Only for Military testing. 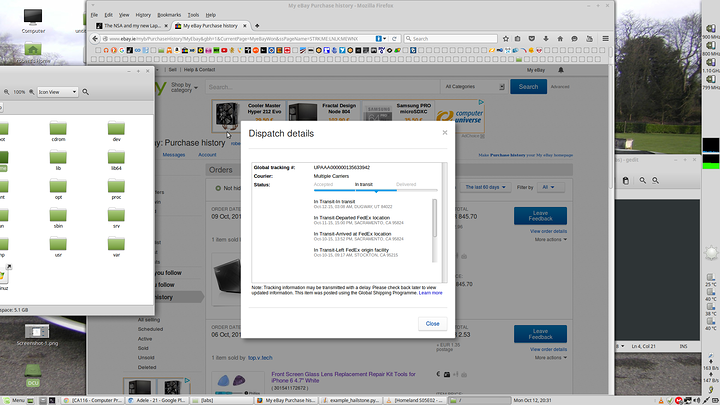 Just looked at the tracking pic. What sets my alarms off is that it mentions "in transit - in transit" rather than mentioning that it's at a FedEx facility like on the other steps.

When it arrives, there are 2 options :

Method 1 : Don't turn on the laptop (or at least turn off your router) when it arrives. Start by removing the HDD/SSD and just getting another one. Sell the original one to recover some of the money.
If you have an old Wi-Fi card that fits, use that instead of the one that came with the laptop. It wouldn't be to hard to put something nasty in a WiFi module, let it snoop the networks and all data and transmit that. It's an add-on module after all.
Furthermore, look for anything unusual in terms of hardware and pray that these steps were enough to take care of whatever may have happened to it.

Or there's the slightly corrupt method 2 : turn off your router before booting it for the first time, boot the laptop from a Linux live stick (that you throw away afterwards, I have a collection of cheapo sticks just for that sort of purpose), open Gparted and remove all partitions. Send the laptop back as defective and ask for a refund. Use the money to buy a new laptop at a local store. Be sure to pay cash this time.

As amazing as UPS and Fed Ex are at shipping, I've seen them screw things up big time on occasion. I've seen a package go from California to Chicago then back to California and then to Detroit. In all, a ground package took 3 full weeks to get delivered!

Yes I did think of Gparted I had hoped of keeping the windows 8 partition for games with the networking disabled and shrink the partition for Linux but it looks like the SSD has to go I do have a replacement I bought cash second hand I will use that and sell the one in the laptop.

I was looking forward to my new 802.11 ac wifi card but that will be getting replaced with a 802.11 n pci-e I have laying around and a general inspection of the motherboard area with screen shots to follow.

otherwise I hope that will do it I will be using the new laptop for gaming using linux for college work, otherwise I will have to use my other laptop for "Other Things".

If your important enough that they want to physically bug your computer, your not going to know about it through a fedex tracking system.

I assume you dont live on the west coast which would explain its direct rout heading east... actually ebay.ie... which means its going exactly where it should... east towards Ireland.

[emphasis mine] Since when?

Things to think of:
- What makes you of interest for the NSA? (a physical buging is dangerous as it could be found, and thus the technique would be burned. Only good for high-level targets)
- why would FEDEX tell that they work with the spooks (i doubt that is a warrantcanary)
- why would the spooks allow FEDEX to tell you
- since when are the parcel carriers known for effective routing.
- what does in transit mean in their terminology?

Could it be, more likely to me, that the truck/pane just sent and auto update as they were there? Thus it's called transit - transit

I wouldn't know but your plight certainly sparked an interest of curiosity... Sounds strange... Let me know if you find anything.

The NSA thinks Linux Journal is an “extremist forum...

Visiting a popular Linux Website could make an individual a target of government scrutiny. 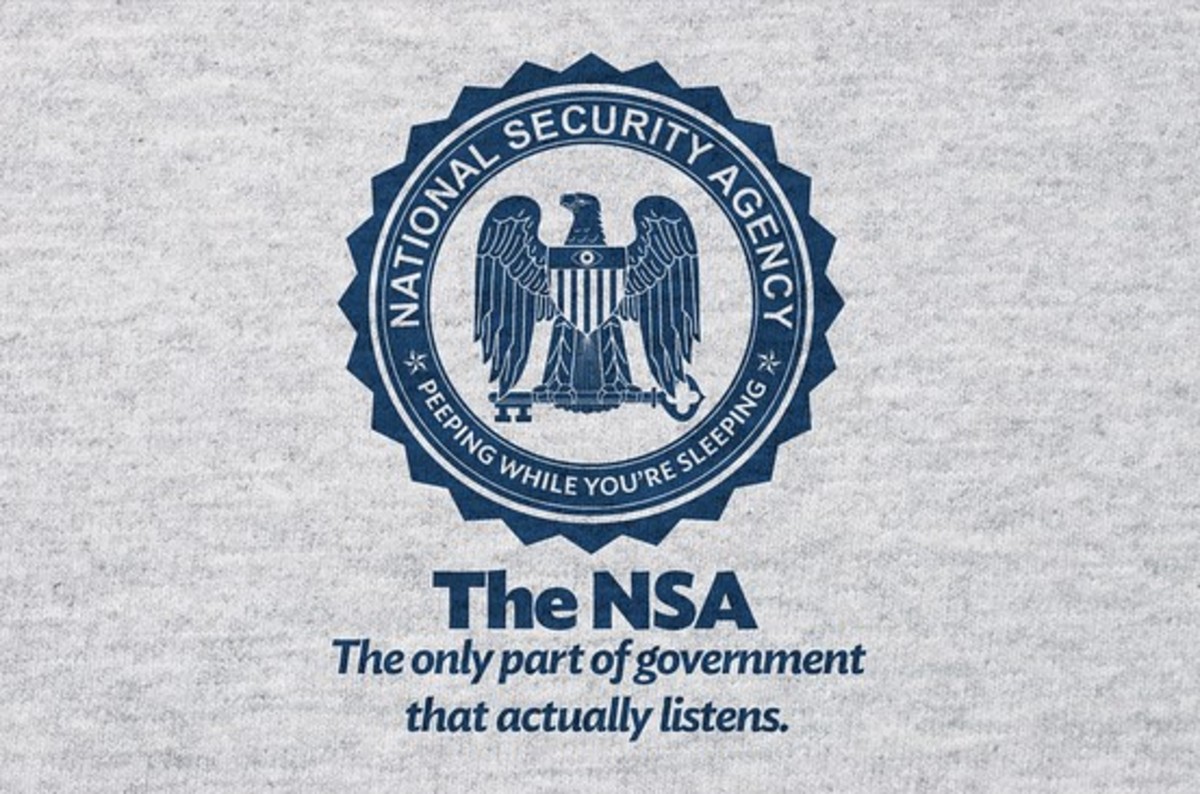 Are you a Linux Journal reader or use software such as Tor and Tails Linux? If so, you've probably been flagged as an "extremist" by the NSA. Leaked documents related to the XKeyscore snooping program reveal that the agency is targeting anyone who…

A root kit may be installed on the HDD, the Firmware may be comprised on the HDD these are devices in them selves and can be compromised separately, a bug does not have to be a PCB with a flashing red led and a antenna like in the movie's.

DUGWAY, UT 84022 is in the middle of nowhere and beside one of the biggest NSA sites in the USA, maybe a mistake was made and routing details leaked out and got onto my manifest details on ebay by mistake.

Maybe its a big coincidence that my laptop is in DUGWAY, UT 84022 or NOT but why give an update for a backwater in the middle of nowhere that is not even a transit point for fedex.

I follow @snowden on twitter... I am on a list as well ^^
I would keep that thing and send it to the CCC in Germany to take apart... if there was any bugging I guess they would find it ^^

On one occasion I had a package go via the Phillipines.

This was not because "the man" was out to get me, it was because some retard put the package in the wrong bin and it went to the wrong place.

I honestly just thought this thread was for humour, and was surprised to see people taking it seriously. The reasons for why I thought this are clearly listed in th3z0ne's post above.