Well, this is my first build log, so if I'm somehow doing something wrong, my bad.

So, I finally got the ball rolling on my first PC build, which I'm calling the HEXecutioner (hence the title). I wanted to go all out with this build, but I won't be posting my parts list just yet because I'm still not set on some of the components. I will say, however, that this build will be used for video-editing, gaming, and music production. Unfortunately, I don't have the funds to get everything I want at once, so this build log will be a more progressive thing (but most build logs are done this way from what I've seen, so whatever).

So let's get the ball rolling on this thing with the first thing I got -- the case. This is the Enermax Ostrog GT. I got it for seventy bucks at Micro Center this past Saturday. 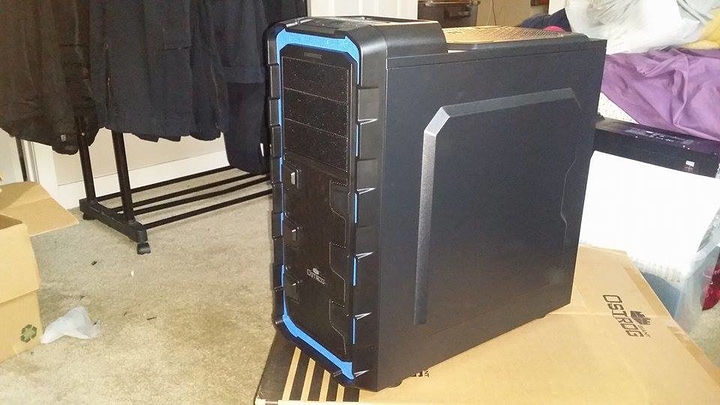 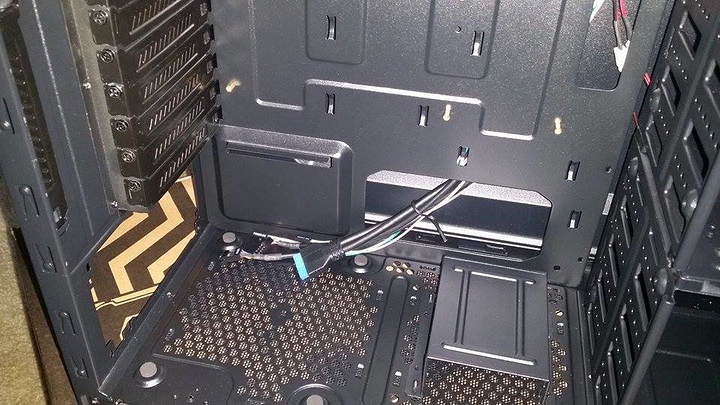 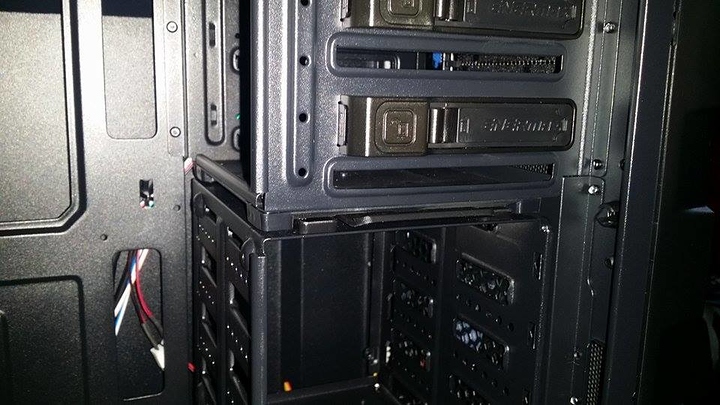 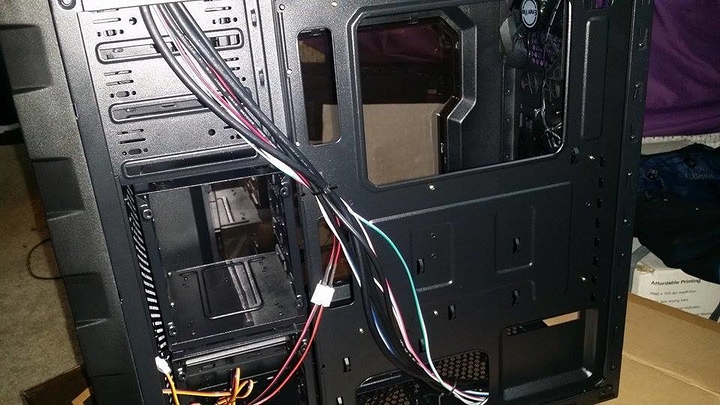 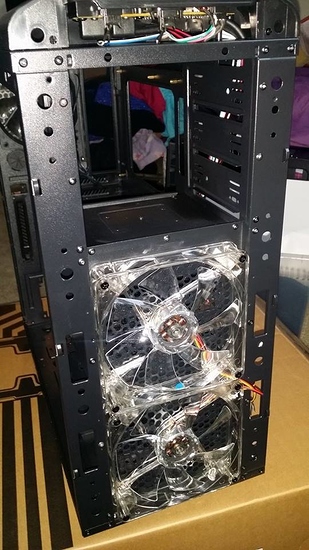 For seventy bucks, this is a damn good case. It's a mid-tower ATX case. It has grommets in the back (which I didn't think to take a photo of), so it has support for liquid-cooling, for those of you into liquid-cooling. The I/O panel is pretty standard -- you have your audio in and audio out jacks, power, reset, and LED buttons (the case comes with three fans, two of which have LED's, so that's why you have that button), two USB 2.0, and two USB 3.0 ports.

Under the hood, you get quite a bit, in my opinion. As I said before, it's a mid-tower ATX case, so you can fit quite a bit of stuff in it. As far as storage goes, it has two hard drive trays, and each are capable of housing four 3.5" drives (they include sixteen drive mounting brackets, so what you do is take mount two of them of each drive, and slide them into the tray). It also has a 2.5" drive tray which is capable of holding two 2.5" drives. This tray sits at the bottom of the case by default (for lack of a better term), but you can mount it on either of the hard drive trays with screws. The top drive tray can be removed if you have a big graphics card, or if you want to mount the 2.5" drive tray on top of the lower 3.5" drive tray.

But what about 5.25" bays, you may ask. This case has Enermax's patented SlideIn ODD design, where you simply slide your 5.25" bay into one of the three slots, and lock it down with their mechanism.

As far as cable-management goes, there's 32mm of clearence bwtween the motherboard plate and the left side panel, so there's a decent amount of room for some cable-management. The case also comes with a few zip-ties and a couple of Velcro straps to help with cable-management.

Cooling? As I said before, this case does support liquid-cooling, but for those of you who prefer, air-cooling, this case has room for up to twelve cooling fans (which is insane). Two go in the front, one goes in the rear, two can go in the top, one in the bottom, two can be mounted on each hard drive tray, and I'm not sure where the last two are supposed to go. It can take both 140mm and 120mm fans, but of course some areas will only support one or the other, not both. It also has room for a 240mm radiator in the top.

As far as other miscellaneous stuff goes, both side side panels can be removed. and the overall build quality of the case is pretty damn good.

Well, that's my overview of the Enermax Ostrog GT. When I have time, I'll post more-detailed photos. As far as this build log goes, I'll update it whenever I get new parts (I'm aiming to get a motherboard, a CPU cooler, and possibly a power supply when I get paid next week). If you have any questions, comments, or other concerns, leave them down below, and I'll try to get back to you as soon as possible. Thanks for taking time out of your day to check this out, and have a nice day.

Good luck on the build man! Nice work with the detailed chassis specs. Are you planning on buying anything special for your music production (i.e. sound card, monitors, etc)?

Thanks! As far as gear for music production goes, so far I am going to get an audio interface so I can reecord guitar (though from what I understand you can do that on a sound card as well, but we'll see what happens). I plan to get monitors, and stuff, but I haven't looked into that stuff too much, but when I do get the audio gear I'll definitely post about it here.

Hell, I could order one right now if I wanted to.

I really like Enermax cases; I'm actually surprised they are not more popular.

I agree. This case is by far the best seventy bucks I've ever spent. 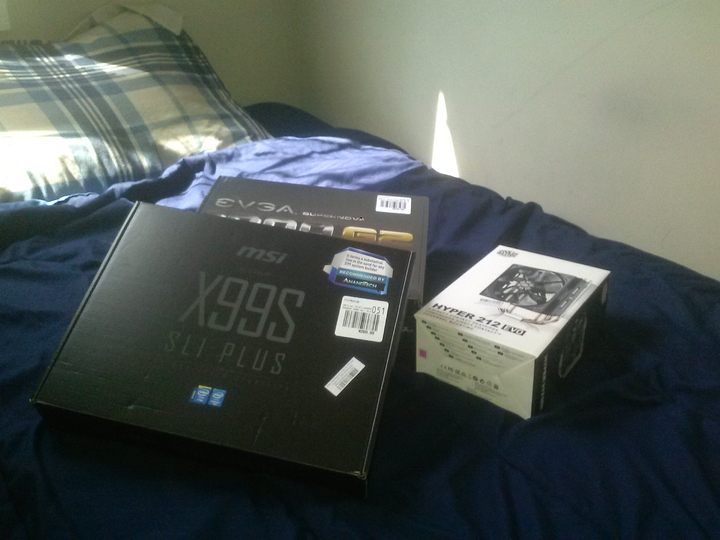 Let's first talk about the motherboard. As stated above this is the MSI X99S SLI Plus ATX motherboard. 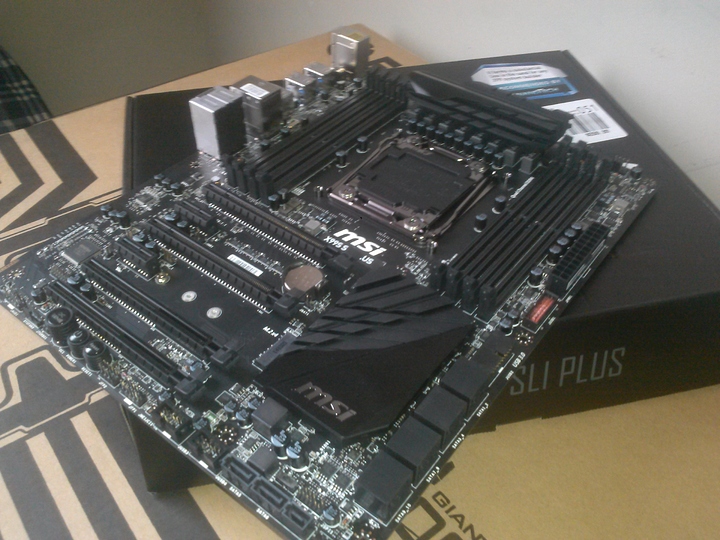 The TS guys used this motherboard in Pistol's X99 build, and I've seen some people from the community use this board in their builds, so some of you may already know about this board, and what it offers, but for those of you who don't, allow me to give you an overview of what this board has to offer.

CPU Socket:
I haven't popped the CPU socket cover off yet, but this motherboard rocks the Intel LGA 2011-3 socket, so you guys should be able to figure out what CPU I'll be going for. 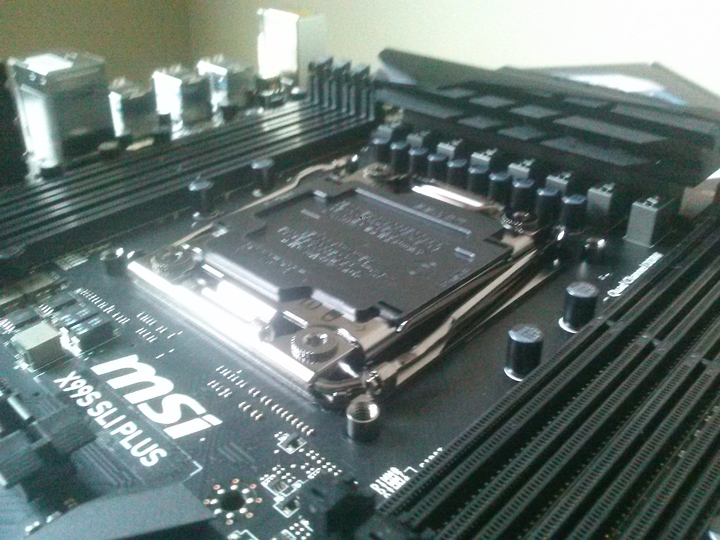 Memory Support:
This board supports quad-channel DDR4-3333 (OC) memory. Though only fourare shown in the photo below, it has eight RAM slots (I'm not sure how much RAm the board can take total, but once I find out I'll edit this}. 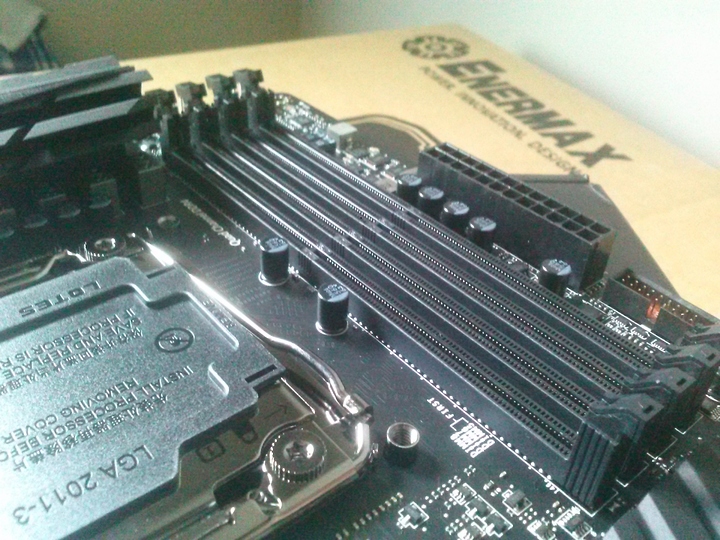 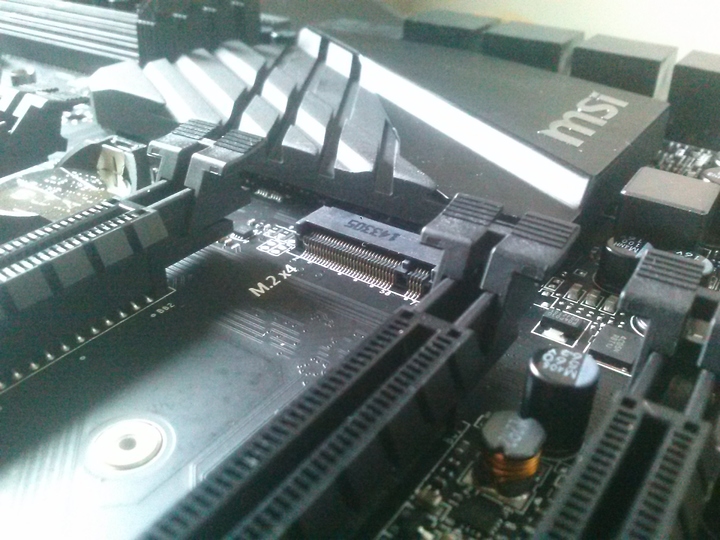 Other Miscellaneous Shit:For those of you who like to run multiple graphics cards, this board has support for both NVIDIA SLI and AMD CrossFire, so both AMD and NVIDIA users can take advantage of this feature.

If you go on the MSI website you'll see something about this being a military class four board. What this basically means is that this board is designed to take a beating (not a literal beating of course). I'm not gonna go in-depth about it here (at least not now), so if you're curious go to the website.

Of course, you have all your SATA ports, fan ports, PCI-e ports, and everything else that comes with a motherboard.

Well, I think that's it for the motherboard. Of course, I can't actually put this thing through its paces for a while, but from the looks of it, it looks like a damn good board. Great uild-quality, and it's just drop-dead gorgeous.

So, for my power supply I went with the EVGA SuperNOVA 1,000W G2. If I remember correctly, this was also used in Pistol's new build. 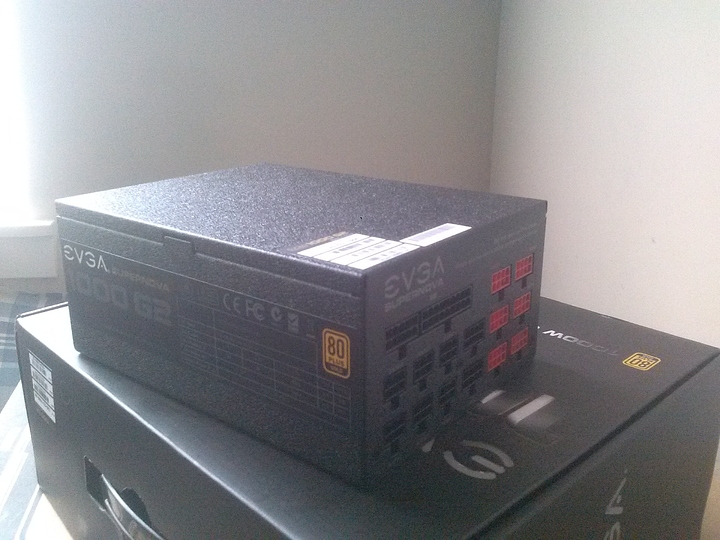 There isn't too much to say about this. Other than that it's 80 Plus Gold certified, it's fully modular, the capacitors on the main board are 100% Japanese, it has a 2-ballbearing 140mm fan on the inside, so it's really quiet, and it protects against, OCP, OVP, UVP, OPP, and SCP. There are more specs, but I won't mention them here (though if you'd like to see the rest of the specs, let a reply down below). Of course you also gt all the cables you'd need. So far, the only complaint that I have is that because it's a larger power supply, it took up some of the space I needed for a 120mm fan o be mounted at the bottom of the case. It's nothing major, though, so I don't care too much.

I went with the Cooler Mater Hyper 212 EVO for the CPU cooler. 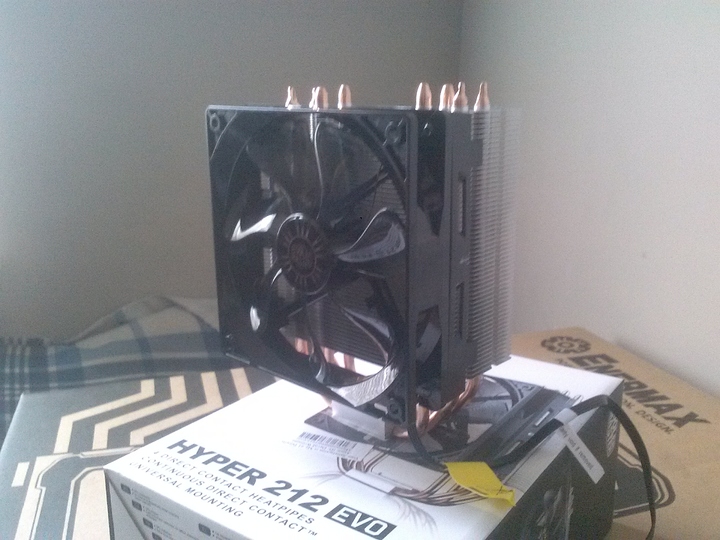 So, nothing too special about this cooler. I'd wager that a lot of you probably own one of these yourselves, but for the sake of this build log I'll give you a quick rundown on this cooler.

It has four direct-contact heatpipes that actually come into contact with the CPU (there's a version of this cooler that has sic heatpipes that I originally wanted, but Micro Center didn't have any of those in stock, so I went with this one). It comes with a seconf mounting bracket, so you could mount a second 120mm fan it it (it comes with a 120mm an, by the way).

The mounting mechanism is great, because it works with both Intel and AMD boards. 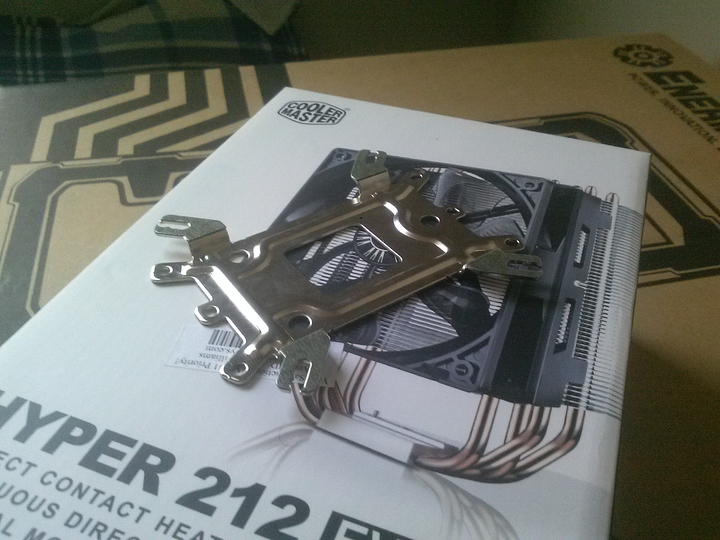 So, that's about it for this update. I'll edit this later to fill in some missing details that I don't feel like filling in right now. If you have any questions, comments, or other concerns, leave them below, and as always, have a nice day.

I take it you don't plan to go super crazy on overclocking?

i hope you fill all those memory slots

If you fill all the RAM slots I vote for a RAM drive!

use a cache for a drive?

How to Set Up Intel Smart Response SSD Caching Tech...

Intel’s Smart Response Technology can significantly accelerate system performance, without your having to spring for an expensive, high-capacity solid-state drive. Here's how to set it up.

Or that too. do something crazy like a 48gb cache.
I use PrimoCache myself, have 8gb set aside for my 5400rpm drive to cache.... don't judge me it works.

hey op, why such a huge PSU? doing multi gpu?

I do plan to do some overclocking, but I don't know if I'm gonna go overkill with it.

Honestly, I had no idea the power supply would be so big.

Not much going on with this update. All I really did was start plugging shit in. Though I did discover that when I put a flashlight on top of the case it creates a cool lighting effect. 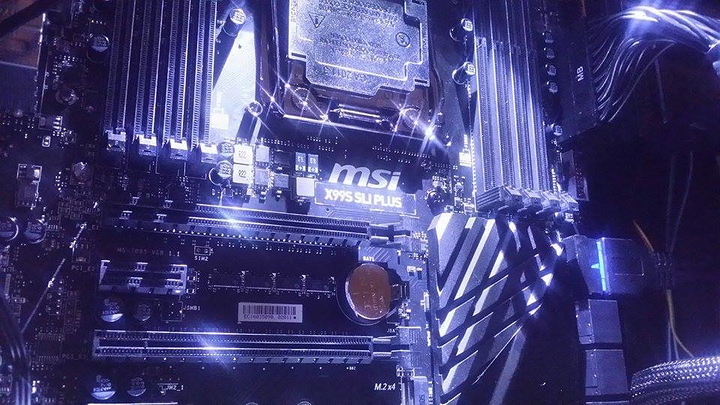 As everyone knows, Windows 10 came out today. 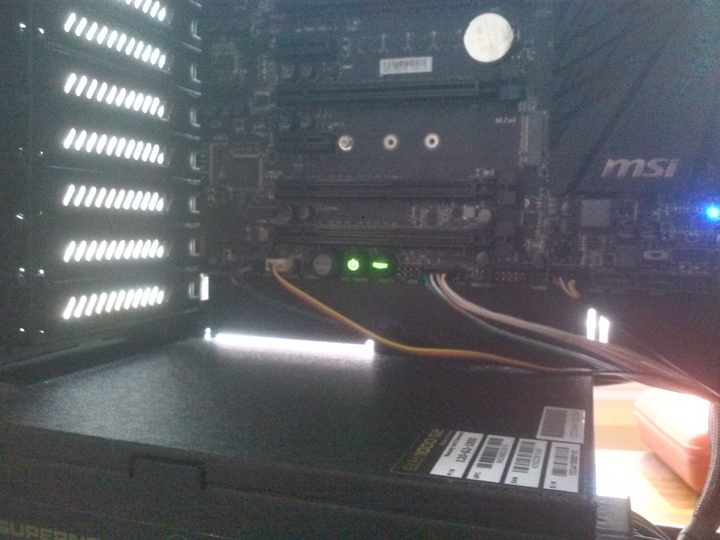 Today I got the Intel Core i7 5820k. We've all seen this CPU before, so I'm not even going to bother talking about the specs. 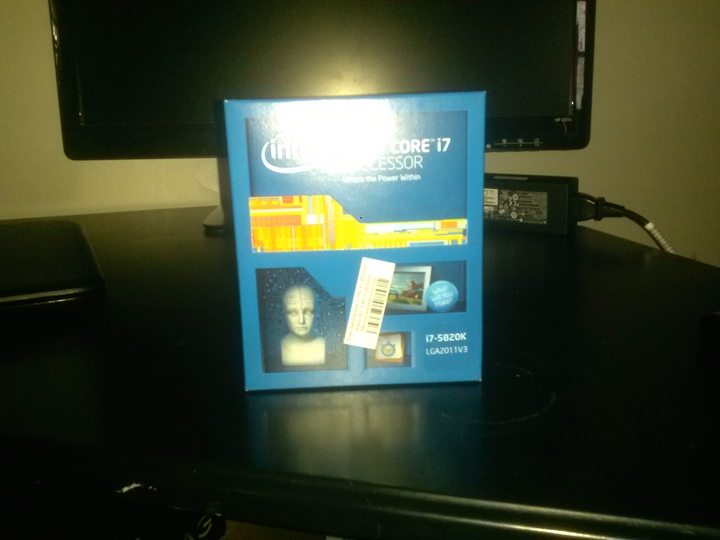 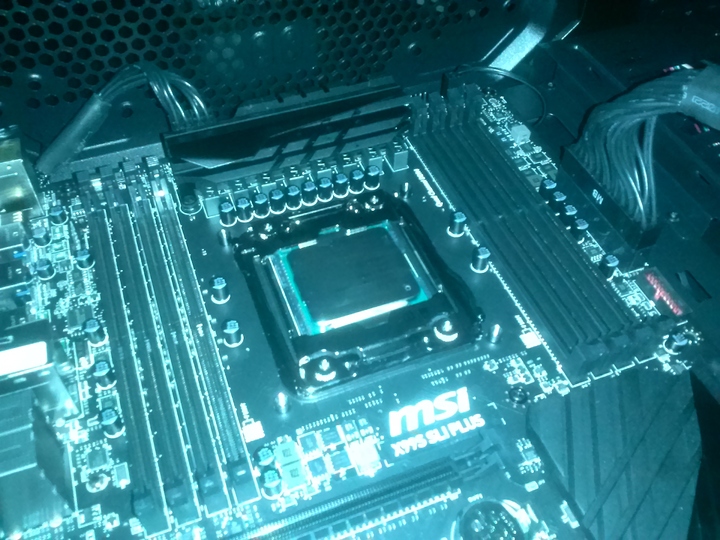 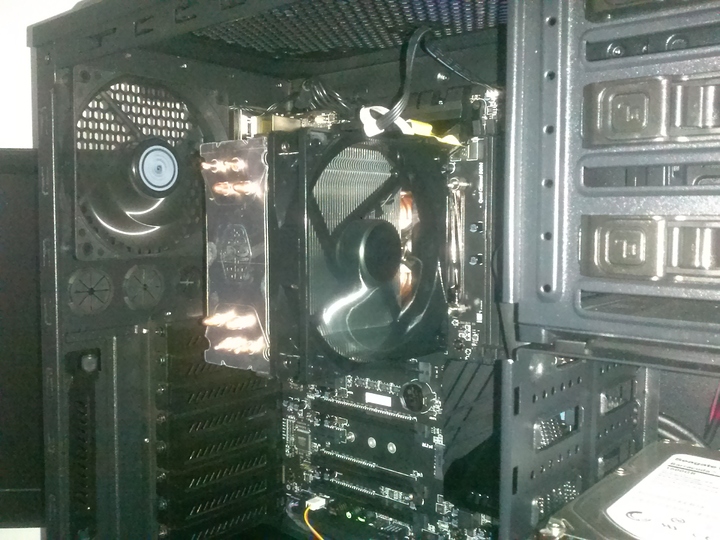 At some point I'm gonna put another fan on the cooler. And again, my apologies for the shitty quality of the photos.