Starting… recently, I decided to start wrenching on my setup in general. This will be a long process that I want to share with you guys. This ranges from my desktop being completely redone, with a replacement coming, all the way to networking, as well as everything in between.

For starts, because I had the images in the thread already, I’m starting with just general desk setup. 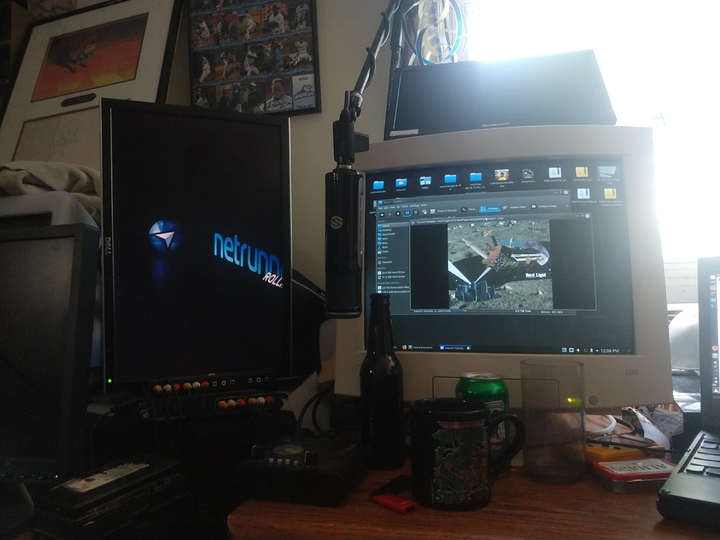 For years I have wanted a CRT as my main monitor. Well, in the last few months I found this gorgeous EV 900. Its not the greatest monitor ever, mind you, but its a lot nicer than the dell monitor that has now become my tool screen. Problem is this poor EV 900 has a tick. The laser randomly resets. The longer I have used it the less it has ticked, so its likely that the issue is just it knocking dust out. I also want to get it cleaned up and maybe a little wrenching done. Theres a CRT technician in my area, so I might ask him to redo the whole thing for me. The color accuracy is amazing, at least for colorblind ol’ me.


(at the pre-programmed clockrates currently) 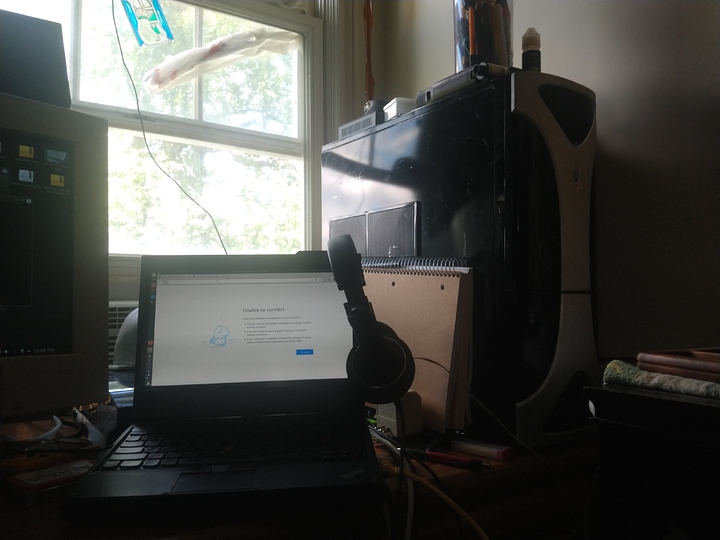 Next is my desktop conundrum. I have chimera back out, and if anyone remembers, I hate this thing. I vastly prefer my mac pro, which has 64GB of ram, SAS 2, and 2 CPU’s that add up to 8 cores. BUT… I want to stream to twitch. So I will be stressing both machines with OBS and seeing which can do all my tasks that I require, on top of stream.

Also have a meme.

I want to start working with mycroft more, so I might apply to the MS store to see if I could get an xbox dev key and… Well you can figure out the rest.

I didn’t know the back port was just a DB line. So kek.

I’m still having retarded issues with this though as when I set up through telnet to have the web ui, when I go to set up the rules and shit and put it in express setup again, the switch does a factory reset. But according to what I have read, I have to put it BACK into setup mode.

So this post marks the start. Its only a glimpse, but I want to post here every once in a while when I figure something out, especially with the streaming benchmarks. Theres plans to work on a dedicated AROS desktop and laptop, then a week long time ONLY using AROS based computers (with exception to my xbox for some games or youtube or twitch), I want to move my classic rebuild thread in here, and the list goes on.

Hope you enjoy. If you don’t… Well too bad I’m here anyways deal with it.

Man i haven’t looked at a CRT for what? 15 years? Or so.
I always thought about trying one now. Same with TV’s. I’m always asking myself if SNES emulation and modern TV’s are just so bad, or if my memory about input lag is just way off. Never was able to figure out how much difference there is between a real console on a CRT and emulation on a decen new PC monitor. It’s just that i feel like remembering all the games to be much more responsive than they feel now.

I’m always asking myself if SNES emulation and modern TV’s are just so bad, or if my memory about input lag is just way off

Well seeing as a crt is much better at color (brighter, sharper, etc) probs you remember right xD

Andxthey were more responsive. You had less input lag to the console and monitor. 1ms vs the 5 or 7 you have now, plus your machine has to accept the input, process it, then kick it to an emulator you might not have a dynarec for, and even then you still have lag.

Post is delayed a day due to technical issues.

For years I have wanted a CRT as my main monitor.

So someone else uses crt in 2019. Some time ago I got rid of my last two crt. I had a cool 15 inches Philips but it broke again for the third and last time. The second crt was 14 inches Goldstar, yellow and nasty but functional.
I’ve been using Samsung 173p+, 75Hz as the main lcd for years … and somehow I can’t convince myself to change to something newer.

So my latest experiment has been delayed. What I wanted to do was take chimera (Lenovo TS140), and my mac pro 3,1, and compare the two at their best. Each of them have their advantages, and in general performance I think they’re about equal. Let me run you through the specs and tell you why this is an interesting comparison.

Both of these machines are running on a 10/100 network. Mostly because its what I can afford for infrastructure currently, but its also not like I’m LTT or L1T. I don’t need a billion gigabit per dickload.

Now I WAS going to test general performance of these 2 machines at their best. The mac pro has SAS and the ability to RAID, where Chimera can really only match it with an SSD. I would do 2 SSD’s in raid, however with where my GPU is positioned on the mobo, I can only have 3 drives, and its pushing down on one of the connectors in the first place. As well, as stated earlier, the 2 SAS drives in raid should be equal to the one SSD on the shitty drive controller. The point is to test them both at their best for streaming and recording a game, not which will perform better than the other, or which bus performs better. The obvious answer is to get 2 SSD’s and plop them in the mac pro and be done with it.

However, I really hate raid. And TBH I need to get over it. As well, I’ve never had SAS before, and I’m not going to spend money on a half dead SAS SSD. So really, its a fun experiment all around. On top of putting 2 entirely separate generations of hardware head to head, one with FSB one with DMI, 6-8 years difference in tech, a top performer vs an avg i5 at best… Plus just to see which fares better.

But did you notice that I didn’t mention my GPU of choice?

Well, I got chimera set up, everything ready to go, started streaming, started TF2, and then BAM the first fan shot to 100%, second fan dead, screen black, machine shut off.

Rebooted, booted fine, then BANG again it went 100%, but the OS stayed up. After another few minutes the card died completely. During that time, I thought “Well dead card, lets see if you run a game”. Went to start Tf2, it told me the card had 368MB of vram and it couldn’t load the textures. So basically my card went from a slightly OC’d 270X, to a really shitty 250X.

I’m still unsure what happened as I keep the thing clean as can be. Old card though, so anything is possible.

My bud I sold my RX580 to basically said I can have it back and pay him when I can, I did the same for him so that’s pretty yeet of him.

However now my room is basically a mess with machines displaced everywhere, and now with my 580 back, hours later writing this sentence and putting my 580 in chimera, I realize my VGA to display port adapter is missing.
…
Also manjaro doesn’t wanna boot because nettle is broken.

So I’m installing manjaro… Again… And I’ll have the results here of test one done soon hopefully. As long as nothing else explodes. However, thinking about the whole thing over all, I’m pretty sure the mac will be on top no matter what.

Quick Q: I don’t think it’ll matter that the mac pro has 64GB of ram and chimera has 16, but just in case, should I only have 2 dimms in the mac so it also has 16GB?

Should it be tested on OSX or linux? I’m leaning OSX because the raid app is retard proof and frankly I’m retarded. I’d rather not blow up my drives or anything.

I’m actually both annoyed and embarassed. What I thought would be a cool test that actually provided me some interesting info has… well, to be frank, ended itself.

I don’t know if the motherboard took a hit from the 370, or if something else has ocurred, but I’ve installed just about 3 os’s to try to get chimera to at least boot and no matter what I do it doesn’t want to actually boot. So THATS extremely disappointing…

Well… fuck. Guess I’ll do the mac pro first then. Chimera was already giving me issues… I’m unsure what to do atp.

Guess I’ll… switch the machines out… and uh…

First, for my intentions and for 580 compatibility, we go to dosdude1.com/mojave and grab his tool. On a mac, we can download mojave from apple with this tool and then make a boot disk for our mac pro.

We will also be dualbooting with linux eventually… maybe. Thoughkto be honest I’m enjoying osx on desktop and linux on the go in my thinkpad so I might just keep that format.

First we clear our flashdrive, download mojave, and flash it with dosdude’s tool. 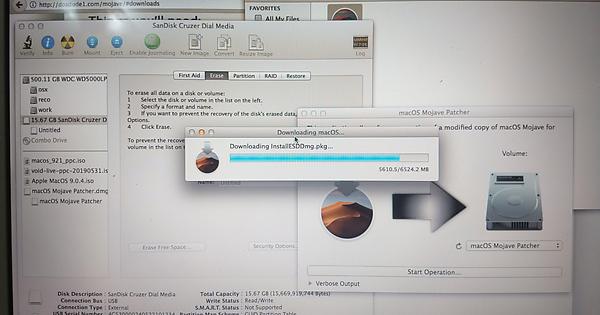 Next, while that drive gets set up, I’m gunna go ahead and cannibalize drives from chimera and plop them in the mac.

In the event chimera actually boots I’ll have it boot off the ssd I had in there and slap the other one in there. Until then, we’ll put the 3tb back in the mac pro where it was. I left it on the tray so it had rubber gromets to sit on.

and now imgur ceases to work. Well the driwes are in, 580 in, disk made, more shit later.

Both of these machines are running on a 10/100 network. Mostly because its what I can afford for infrastructure currently, but its also not like I’m LTT or L1T. I don’t need a billion gigabit per dickload.

Maybe think about a cheap switch…

I have one at home and it’s ok. Nothing special but it does the job.
https://www.amazon.com/TP-Link-TL-SG1005D-Unmanaged-Gigabit-Desktop/dp/B000N99BBC

I have a catalyst 3750 here waiting to be configured but enery time I turn on the web ui and try to put it back in express setup mode it does a factory reset and I can’t do anything.

I have some switches that I was using before.

Didn’t boot 10.14. Hell I can’t get it to boot anythitg. This is a tew fucking usb and its already dead are you fucking kidding me.

Also my thinkpad is dead now.

I’m going to start beatitg shit with a lead pipe I swear to god.

After setting it up, are you doing wr mem or copy run start on the switch? Otherwise, your changes won’t persist on reboot (just sanity checking)

Doing wr mem as many people have told me to do.
however the switch still resets when I try to put it back into setup mode and access the webui.

Update: thinkpad is not dead. One of the ram chips popped. So my answer to that was to smashxit with a hammer, rip it into little peices in my hands, and chuck it in the wood burner.

Aww, would have made a good keyring.