The Future For "Enthusiast" Level Hardware

I’m not an average PC user and I suspect on this forum I’m not the only one. I began my computing experience in 1978 on a Commodore PET with notched cassette tape for storage. Since then, I’ve had at least three computers on the go at all times. Amiga 1000 / 3000, Pentium I, II, III, Athlon, Opteron, Bulldozer, Intel, Rasp Pi (numerous laptops, tablets and phones) and finally Threadripper.

Currently, I have a pair of Intel based HPE Gen10 Microservers with SSD’s for a home lab on a 10GB network with multiple NAS, Wifi and my 1950x TR workstation with 3090 as my daily driver. On my Threadripper system, I do video editing and conversion, VR (Vive Pro 2, soon to be a Varjo Aero), VM’s and gaming. Lately though the 16 core TR 1950x is starting to show it’s age.

Was looking forward to a 32-core Zen 3 5000 HEDT series update for my refreshed system, but it appears as if only the PRO line is coming out. While I have a generous budget compared to most, that’s going to sting if my only option is PRO 5000 (plus decent Mobo and RAM) to run it at peak.

The industry (and this is my opinion) seems to be forceably splitting enthusiasts into what I’ll call recreational and professional levels. The PRO level is expensive AF, where the recreational side has underpowered hardware for what I require. Threadripper 5000 HEDT was going to be my sweet spot for performance / cost, but this is no longer an option.

I’m finding myself in a state of limbo waiting for suitable options to appear.

Save a couple of announcements from Intel and NVIDIA for HEDT options, none of which are available yet and the inevitable new generations of TR Zen 4 / 5 / 6… I’ve been waiting 18 months for TR HEDT to come out. Now, it looks like I’m at least another year away from upgrading my system, maybe two.

Anyone else in the same boat? What options are you looking at?

I was looking forward to TR 5000 series but alas it won’t ever come out, since there is no competetion and the user are already a small number.

So I’m basically in the same boat, I hope Alder Lake-X will be a thing and we will get decent boards and CPU SKUs.

For now my 24cores are enough for everything I do but I need the PCIe lanes more than then cores tbh.

It’s reallly annoying what AMD did there.

I was also waiting for TR 5000 series. 24-32 cores, quad channel ECC memory and more lanes. That’s what I want. Without the price tag of TR Pro. Which will only be available for non-OEMs after Zen4 hit the shelf with DDR5+PCIe5.

Our best hope for that kind of system other than the “upcoming” TR Pro 5000 is probably Intel with their Sapphire Rapids platform which features DDR5+PCIe5. But Intel price tag for workstation-grade hardware is probably even higher than TR Pro.

We can only hope Intel comes out with something decent on the HEDT side to motivate AMD to counter.

The one thing the AMD accountants didn’t take into account was, we can’t buy what isn’t on sale.

build an EPYC based workstation. there are some good workstation style EPYC boards, and you will have a lot more upgrade options in the future.

the HEDT platforms are in zombie mode, move on.

I would agree with that solution for everything I do save gaming. Not sure if that would cause any incompatibilities and I’m not aware of anyone who has done a compatibility study of EPYC chips running Crysis (as one slightly joking example)

A sworkstation works for me, but that’s a lot of cash to throw at something on faith. Maybe a video for Wendell? Maybe not. Asking someone to play games all day for “science” may not be a good ask.

I was hoping for X699 to upgrade from my 9940X, but just decided for Xeon W 4189 for my new system as it’s fairly cheap I picked up a 24 core Xeon + Motherboard for under 2000£ although that’s including some slight deals from my hw vendor

You were basically spoiled, first couple of gens of threadripper were a bargain.

On the plus side, if you can manage to do what you need on a 5950x based platform then it will still be hugely faster than a 1950x in most tasks and will presumably come in well under budget.

Perhaps you could beef up the microservers to run your VMs so you aren’t having to do quite so much with your main desktop? Perhaps your threadripper system could replace one of them? 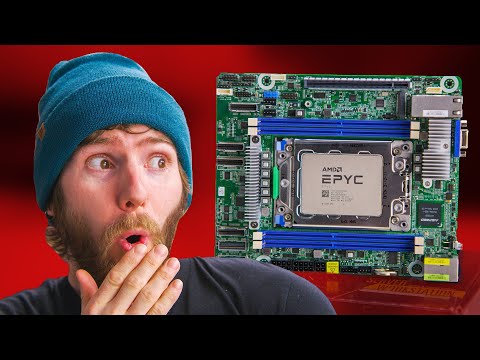 EPYC has no compatibility issues in gaming. There are a few builds floating around the internet with EPYC and even GPU Passthrough for a gaming VM. (would be even easier to build as a regular desktop system with no VM)

the only ‘problem’ people occasionally mention is the slower RAM speeds because of ECC REG RAM.

I plan on building a new system from the ground up so the 1950x will become a dedicated Linux Mint platform on retirement. I’ll put my TITAN XP back in there and have a peppy Linux workstation.

The home lab is purely for testing and trials for work. Beyond a Win10 vm, everything changes on there every few months. It’s my scratch environment with no long term anything.

I looked at Threadripper HEDT as a perfect CPU for what I do. Spoiled? Maybe, but I looked at TR as a thank you to the enthusiast community after supporting AMD in the dark days. Now, if a “name” manufacturer came out with a dual 5950x board, I’d be interested in that, but a single CPU just won’t cut it. I’ve seen a few Chinese back alley versions, but their reliability and long term support is questionable.

why the avoidance of EPYC? you need bulldozer, stop buying attachments for your skidsteer and complaining it doesn’t work.

the only ‘problem’ people occasionally mention is the slower RAM speeds because of ECC REG RAM.

Problem is the latency, not the clock speeds in general, because you just got the channels. 8 Channels of even old DDR4-2400 will out-bandwidth any overclocked DDR5 consumer memory.

I’m not sure how much clock speed you can get on EPYC with 8 RDIMMs…there are 3200MT/s RDIMMs around. But I’m pretty sure EPYC defaults to 2667MT/s for anything other than 2 DIMM config (which no one does).

Yeah, timings are all 22ish and with more memory channels comes higher latencies in general. But as we can see with DDR5, bandwidth can be a gaming thing too…and EPYC DDR4 memory bandwidth is insane compared to even the fastest DDR5 on consumer platforms.

why the avoidance of EPYC?

Clock speeds. Threadripper offers EPYC-like capabilities with way higher clocks. You have to get the F-type SKUs to get close, but these things cost a fortune. So as an Enthusiast workstation which is also used for gaming, EPYC just doesn’t cut it unless you spend 10.000€ on that machine. We want something in the middle between a 600€ 12900k and a 5000€ Milan 75F3

there is no place for a new ThreadRipper.

i am on ThreadRipper myself, I am sad to see it go. Say your goodbyes and plan to move on.

there is no place for a new ThreadRipper.

Yeah, timings are all 22ish and with more memory channels comes higher latencies in general. But as we can see with DDR5, bandwidth can be a gaming thing too…and EPYC DDR4 memory bandwidth is insane compared to even the fastest DDR5 on consumer platforms.

DDR4 availability and reduced costs over DDR5 was another consideration for a 5000 TR build.

TR 5000 PRO may be an option, but without an advertised MSRP, it’s hard to budget today.

i would call that an EPYC build. pun intended.

TR 5000 PRO may be an option, but without an advertised MSRP, it’s hard to budget today.

the PRO line may hang around a little longer, but expect it to be mainly sold in prebuilts. Even the PRO ryzen desktop CPUs are hard to get in retail.

TR 5000 PRO CPU’s should be on the market in Q2 of this year (according to one of Wendell’s recent vids). Am waiting to see the sticker price before making up my mind of which way to go. I predict 32 core will probably be in the region of $5K.

So then R-DIMMs themselves are the main latency culprit if high clock-speeds can be achieved on EPYC, no?

This does not make sense to me, are all latency-sensitive use cases avoiding EPYC? A large part of the market for aforementioned (I was thinking about a different thread) Mac Pros, which require R-DIMMs, is in audio production; is that not also latency sensitive? Maybe audio latency sensitivity is not related to memory, but surely there are other workstation use cases that are sensitive to memory latency.

Some part of this picture appears to be missing.

someone might have a ‘latency sensitive workload’ but that term, and peoples understanding of it, has NOTHING to do with RAM latency.

there is a SMALL performance penalty in comparing ThreadRipper vs EPYC even if core count, generation, and RAM MHZ are all kept the same. EVEN if you could fine RAM with the same timings across the 2 platforms there would be a SMALL difference in benchmarks with EPYC taking a very minor performance hit because of the ECC REG RAM.

you are comparing a Ford F350 to a Chevy 3500 though. they both have pros and cons. IF you load up the ThreadRipper with fast gaming ram it will have faster benchmarks sure, but you may be getting RAM errors and your rendering jobs may suffer. ThreadRipper can use NON-REG ECC, but that has its own cons included.

so just use EPYC, and understand that there is a .1% handicapp for REG ECC RAM, but you make it up in reliability of completed process.