The AMD Lawsuit over Bulldozer does not make sense to me

Here is the lawsuit for your reading pleasure: https://regmedia.co.uk/2015/11/06/amd_bulldozer_lawsuit.pdf

Here is how I look at the AMD bulldozer family of processors and how they work.

I look at them like this: You have 8 students who have been split
into 4 groups of 2 and each group has been given a task to complete. Say
each group is supposed to create a story using images and cut out words
from magazines. They have access to a stack of magazines per group and a
set of markers, glue and crayons as well. Each student can work
independently of each other to accomplish the task by splitting up the
tasks. Example being that one student looks for pictures and cuts them
out while the other student get the words. Each student is working all
together on a large canvas split into 4 parts. While one student is
cutting out the pictures, the other student could be gluing the words in
place or using the markers and crayons. When the student getting the
pictures is ready, they either have immediate access to the glue and
markers/crayons or they need to wait a second for the other student to
finish. then they swap places and tasks. in this way, each student is in
fact working separately from the other to accomplish a task while
sharing resources.

AMD processors have been shown to be excellent at cryptography tasks
which involve large amounts of number crunching and splitting tasks
across cores to maximize cryptography computation.

Because there is that gotcha of every core does share cache with another core, my money is that AMD will lose this.

PARTIES
8. Plaintiff Tony Dickey is a natural person and citizen of the State of Alabama.

Anyway, he doesn't have a leg to stand on. What is a core? as @thecaveman just stated:

Why can they not share other resources? And if the definition states they can not, is it technically "multicore" if they share the same interconnect? (aka the socket) 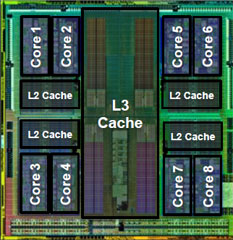 Everyh 2 cores share a pool of L2 Cache, and because of this I feel its a reasonable argument to say that every unit of 2 cores is really more realistically 1 unit because of the shared cache. If AMD loses this, because of this caveat, and it is a very big caveat, I will not at all be surprised. But as these things go its going to be years before we see the end of this.

In that case why isn't Intel being brought up on this as well then?

If the judge says that AMD misadvertized their cpus, then nVidia should get a class action suit against them the next day for the same thing. Technically, the 8350 does have 8 core. However, the general public might be mislead by it being called an octocore because those cores don't each have their own resources. They are not the same as cores in Intel's cpus. Meanwhile, nVidia advertized 4gb vram for the 970. Technically, it does have 4gb of vram. However, it isn't the same as AMD's 4gb of vram. Those two issues seem the same to me.

(I have no idea if nVidia has already been sued over that, but still)

EDIT: However, nVidia hid the whole 3.5gb thing while AMD was upfront from the start. At the time of launch, it was public knowledge that they were using a module design with shared cache and FPU. Everyone has known that. The only problem is that the "lay man" wouldn't be able to understand that and would take the branding of an octocore to mean that it is the same as 8 of intel's cores. So it seems that what nVidia did is even more egregious than what AMD did. From the beginning, we all knew that the 8350 had 8 cores with a caveat. Meanwhile, literally everyone thought that the 970 had a full 4gb of vram (of the same speed and all that).

Because each core has its own l2 cache. They all always share the l3, but only AMD's shares the l2 cache. Also, AMD's modules share a FPU while Intel's do not. I think that the FPU thing is going to be the biggest issue. As their octocore literally can not do 8 floating point calculations at a time.

I know that they all share L3 and the differences between the L2 on both platforms. My point being is that his argument weighs quite heavily on the fact they share resources at all. So why isn't the argument applied to ALL the resources and not just some. (hence why I originally noted the interconnect sharing)

It feels to me that the party envolved is either disgruntled because he didn't get the performance he was looking for and found an easy way to exploit this (through AMD's quite open publication of CPU architecture) or is looking for 5 minutes of fame.

I really think that it is because of the comparison between AMD and Intel. AMD's "cores" based on bulldozer are not the same as Intel's "core". Correct me if I am wrong, but up until Bulldozer, all "cores" had their own L2 and FPUs. To my knowledge (and I don't know much about earlier architecture at all), Bulldozer (and subsequent) is the only architecture that shares those specific resources. The problem being that where they drew the line for a "core" is different and could potentially mislead people.

EDIT: He could just be an nVidia/Intel fanboy and want to hurt AMD however possible. But I doubt that. I wouldn't exactly put it past nVidia to be behind this either.

In my Honest opinion. I don't think AMD will get into trouble for False Advertising...

HOWEVER for APUs. I would gladly throw AMD under the bus for false advertising..oh look we have a 12 core APU coming... NAH just kidding we meant 4 processing cores and a 8 graphical cores..

In my Honest opinion. I don't think AMD will get into trouble for False Advertising...

that's what this lawsuit is about really.

This is not false advertising, imo. Technically, there are 12 "cores" there. It is just one of those marketing bs things that you have to ignore.

Hmm okay, thats kinda weird because we allready know how Buldozer is build up for years.And we also know how they technically work.

The matter of fact is, i´m not sure if this law suite would stand.Because of the simple reason, that an OS does not see the physical diffrence between a core or a thread.Which basicly means, that an OS basicly handle's a FX8350 as an 8 threaded cpu.

This is a post i made in the other lawsuit topic.
And this is why i think this lawsuit might now stand

yeah but marketing it as 12 cores is ambiguous. when discussion of cores are brought up in a CPUs people assume they are talking about processing cores. not graphical cores.

But it is not a CPU. It is clearly labeled as an APU which by now, everyone knows is a CPU paired with an integrated GPU.

Which is why AMD doesn't call it a CPU but an APU. A 12 core cpu would have 12 compute cores. A 12 core APU would need to divide up the 12 between graphics and compute.

yeah but people who don't look into that are not going to know that. all they see on the box is a 12 core processor.