This is a companion discussion topic for the original entry at https://level1techs.com/video/test-driving-amds-epyc-32-core-monster-cpu
3 Likes
Grokas December 20, 2018, 7:51pm #2

As someone who has been forced to go “to the cloud” for large dataset computing, this was a sight for sore eyes… and sore wallets.

Thanks for continuing to dive deep into the nitty gritty with these setups Wendell!

Im glad this is in the mix

I’m out ouf PCIe slot on Asrock X399 Taichi, I consider split one of PCIe8x for two Blackmagic Decklink cards (16x->4x NVMe-> NVMe->PCIe4x. In my case both BM cards will be used in HostOS.

@Wendall, I just watched the YouTube video and heard you’re open to doing workload tests. I’m curious how well that would scale with FFmpeg HEVC encoding vs. my OC 1700X.

Could I cook up a test for you with some beefy Carry Trainer footage and a custom FFmpeg line command?

Really nice build! I’m curious to know more about the AMD CBS settings seeing as Gigabyte barely explains any of that in the manual. E.g. how does the determinism slider affect performance? Is there something else that could squeeze out the last drop?

Just to add to the discussion, I’ve built a very similar system to use as a fat node in a cluster for physics simulations. I used the same processor and chassis, but with the Gigabyte MZ31-AR0 EATX motherboard, 512 GB 2666 MHz RAM (16x32GB) and used a Noctua NH-U14S heat sink with a Noctua 3000RPM iPPC fan. The other nodes are almost identical except based on the Threadripper 2990WX using 128 GB RAM. There were some minor hiccups:

It worked nicely in the end and it’s up and running. A really good performer too, and seems to suffer less than the threadrippers from memory demanding work loads with high thread count, presumably due to the additional memory bandwidth/channels. I’m really eager to get back to work and explore the bios some more… or perhaps I should just use IPMI

The memory runs at 2133 MHz when all 16 slots are fully populated. To my knowledge there’s not much I can do about this. Is it the same for the MZ01-CE0? It has some

I’m curious, can one buy the Gigabyte MZ01-CE0 online anywhere? Or is it necessary to call one of Gigabyte’s distributors and get a quote? If you’re allowed, I also wouldn’t mind knowing the general ballpark price I should expect to pay for the MZ01-CE0. Thanks for any help you can provide.

All that x4 Bifurcation means I could build the ultimate vMix system to compete with the Tricaster. Man, with that many lanes, you can fit as many 4K capture cards as you want for multi-camera production.

Anyone who isn’t familiar with vMix:

And Tricaster is a Newtek product that is basically a Windows Enterprise OS PC with lots of capture hardware:

Leader in innovation that fundamentally changes the way video is being created - The future of live production today with IP Series, MediaDS, NDI Technology, TriCaster, 3Play, TalkShow with SkypeTX and LightWave 3D.

Edit: Oh yeah, and vMix is so much better than the Epiphan Pearl if you have a monster machine like that.

Great video. I’m researching a build for 2019 to replace an FX-8350 cloud host (I need that management port). I have some questions: 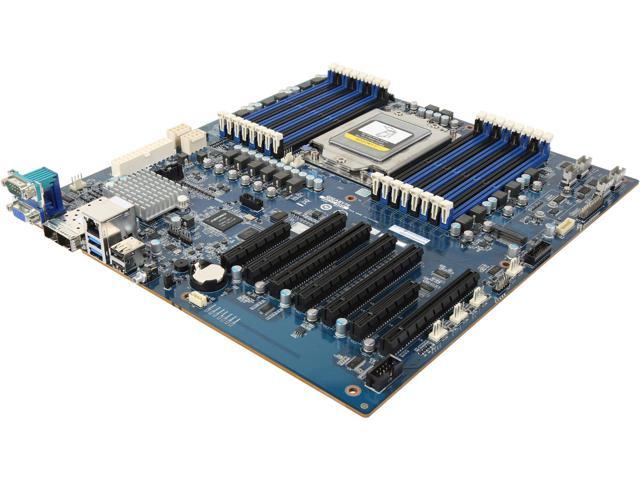 Followed Level1 on YT for a while. Seeing this build has motivated me into building an EPYC system.

So, finding SP3 boards in the UK has proven to be difficult, however I seem to have found a supplier that can sell me a Gigabyte MZ01-CE1 (ATX, no 10GBe).

It will become my replacement ESX 6.5 server where I run a number of Xubuntu virtual desktops.

Bump… Anyone got any advice EPYC memory config ?