VICTORY!
I just built my first ever water cooling system!
Quick question, my temperatures suddenly go up on the CPU. Under load is 25C but it randomly goes up to 50s and 60s whenever it reaches ~20% ~30% of use. Is this normal for a newly built system? (corsair H100i v2)

Grats!
I don't think that is normal.
Can you monitor the pump and fan speeds? See any dips in either that correspond to temp rises? Are you using the corsair link software to monitor it?
Did you take the sticker off the water block?

Sometimes they put stickers or a film on the copper side that contacts the CPU to protect it against scratching.

The temperature will be controlled by the pump and or fan speed. If you can see the RPM, that will let you know if something in the BIOS is set wrong, or the fan profiles are generally set wrong. That cooler will have no trouble keeping your cpu cool.
I would guess the pump speed will be fairly constant, and the fan speed is what varies with temp.

Would I need to reseat my cooler?

I am a little worried about this build due to these unusual results.

I do need a response since these fans randomly roar and it is freaking me out a bit.

I would rule out everything else first. It seems to work fine under load. It's just under a small amount of load it doesn't appear to be cooling right.

So the pump has a fan cable that plugs into the a CPU fan header, and a usb cable that connects to the motherboard right?
And both fans connect to the pump? You probably won't see any usefull fan speed information in other programs. You will have to use Corsair Link, that's where i think the problem is.

50c is not a high temperature for a CPU, but it is getting high for water cooling loop.

All is connected. Both fans are in the radiator.

It seems people are installing the backplate incorrectly and this is causing issues.

What correct way is there?

Try reinstalling everything. Double check placement and orientation of the brackets, security of plugs.
If it's still playing up, try contacting support or RMA the cooler. I hear some people have unreliable units also.

I'll keep you updated here. This may take up another couple of hours because of my job schedule. Hopefully a good sleep replenishes my thinking!

Reseated, installed. It has the same effects. Still shoots up to 40C at 20% load. I even caught 60C at a random time when I was extracting something.

And for some reason, the fan says 0RPM on the water cooler listed in Corsair Link.

Sorry to ask this very obvious question but, did you use thermal paste?
also if you are not an expert pc builder (nothing wrong with that), something that helped me was watching videos of people building pcs with my hardware.
you're not going to find someone using the same ones as yours so you may need to watch one for each component, this will help you get to know its particularities and some tips.
also maybe you should share your components on a pcpartpicker list and maybe some pictures of the build so we may be more able to help

I used the pre applied thermal paste. Here is one picture: 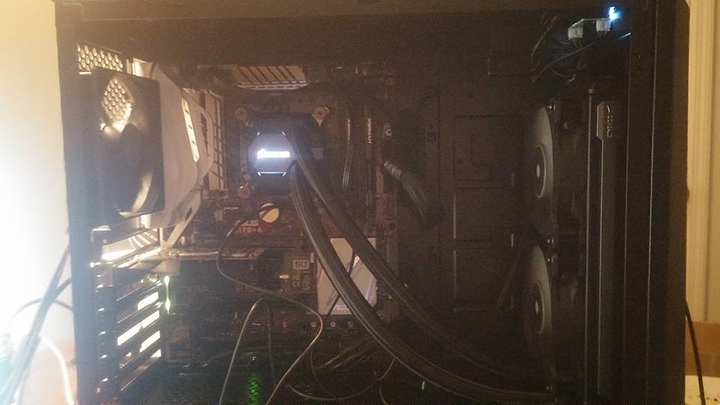 I don't have one of these, so don't know how it typically works.
It might be that the pump is seizing up randomly, or just not working well. I'd contact support and mention the pump speed is 0. Hopefully you can return the cooler. Corsair quality control aye? Not always what it's cracked up to be.
From the pics I found, these things come with thermal compound already on the block. Its probably not the best stuff in the world, but will do the job.

I have that same motherboard, I have an idea, check if your pump and fans are pwm capable or not (check your manual or google it)
once you know check if the settings in the bios are set to dc instead of pwm for each one of them, I had that problem at first

The pump can be plugged on any fan header but the pump heather is designed specially so that the software can detect it and you control it better, my pump is plugged there, my cpu fan is plugged on cpu_fan and the second one on cpu_opt, try it like that and tell us. how it goes