Teksyndicate Site is in Mobile Version

This is happenning despite me being on my laptop, which is wierd. It's fine on chrome but on Maxthon, the site is being viewed in mobile.

Whatever this was, it's gone now, or rather the site is being viewed in the desktop version and not in the mobile one.

What's your screen resolution? It might be do to that.

It shouldn't matter though, as I run it on chrome and it's fine.

Does this site even have a mobile version?

Fun fact: If you're running Firefox, you can press Control+Shift+M to enter Responsive Design View and see the website at various sizes.

Yeah, but the mobile site is kind of....unwieldly. The "main store forum the feed" bar likes to jump to the top of your screen, and sometimes it takes up about half of your screen because of space issues. That bar just generally gets in the way of everything, and it gets even worse when your keyboard pops up on the screen so you can type a forum comment or something. You can't even see what you're typing. All you can see is that top bar and your keyboard. Not to mention that the site is supposed to actively adjust so that all the text fits on your screen, and half the time this just doesn't happen.

The mobile site is a mess in my opinion. There were a lot of nice concepts behind it, but they were all executed pretty poorly.

What mobile device are you viewing the site with?

I'm viewing the site on the same device (with the default browser) and I'm not experiencing any of the issues you've mentioned.

Have you cleared your cache/cookies recently?

Yes, I think it's just my browser being unsuppported, or not having the correct support for scripts.

Maybe it's because I'm using Chrome in combination with Swiftkey for the keyboard?

I spent a good five minutes having fun with that before I got bored. But useful information for sure.

Downloaded Chrome to test, everything seems fine. I didn't test Swiftkey. Sounds like something is causing a conflict for you though. 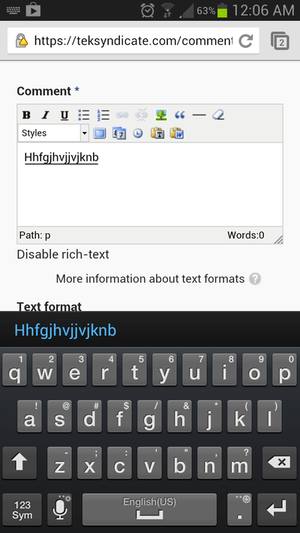