As always, what seems like every month, we're hearing more and more horror stories of the Windows platform. Privacy concerns, advertisement concerns and so on. Now it's taken a much bigger turn. If you are on Windows 7 or Windows 8/8.1 Microsoft has released a security update for Windows 7 and Windows 8/8.1 for Internet Explorer (I know you're thinking..) who cares, who the hell is using I.E? well businesses really. the horrible truth about this particular update is that it's more of a "Update Tree" of updates. it's an SeCURRRity update that once installed will install another update that allows Internet Explorer, to display advertisements in the browser saying "UPGRADE TO WINDOWS 10 GOD DAMN IT!!!" now this is a rumor, the problem is, if you analyze the update information it says that the update will do this. but so far no one has been able to TRIGGER I.E into displaying the advertisement. AMD has finally decided to get on the thunderbolt hype train officially. AMD has released an update stating that their GPUs will support hardware so that you can use a thunderbolt interface on your Desktop Graphics card to Laptops.

The current lineup support is

Google has finally released the developer preview for Android N, the successor to Android Marshmallow has been released for Developers. if you are feeling a bit fiesty you can try it out on your nexus device, but as always be warned, it's most likely buggy as shit.

AMD has finally decided to get on the thunderbolt hype train officially. AMD has released an update stating that their GPUs will support hardware so that you can use a thunderbolt interface on your Desktop Graphics card to Laptops.

They've been working with Intel for months on this. It was really not their fault it took so long to implement, they had to get everything approved with Intel before an official launch could happen. So kinda unfair to say that they are "finally" getting to it, when in fact they've been working on it for almost a year.

Remember that Intel owns Thunderbolt, and only officially allows eGFX with Thunderbolt 3, a technology that came out last June.

I know, i expected them to take that long. It wasn't a surprise to me, it would of surprised me if Intel denied AMD access to it.

AnandTech pointed out an important bit of trivia, AMD started this whole trend with XGP in 2008 and only now with high speed standard connectors such as Thunderbolt and USB 3.1 can they truly get the ball rolling. 8 years late, but they finally got the industry to pay attention and start moving on this to get eGFX standardized.

AMD is known for thinking ahead so it also isn't a surprise. HSA is a nice idea but i bet it will be a thing in 5 or 6 years. it's good we have this for AMD cards now.

Shamless self bump of champions.

Thanks for doing this kind of blog, thumbs up ;)
Always interesting to see whats coming up in the tech-world...

So for the AMD thunderbolt upgrade, will they be releasing new hardware revs for the already released models that are supporting this update? I havent been keeping up with the new AMD GPU tech.

Hmm. Wonder if anyone on the forums has messed with Android N yet. There's some good thread post opportunity there :D

I would love to, if it were supported on the Nexus 7. sadly it's been deprecated already. only support Nexus models are the Nexus 6, 6P, Nexus 9, and Pixel C and the Nexus 5X

So I got the Advertisement to show up in Internet Explorer. 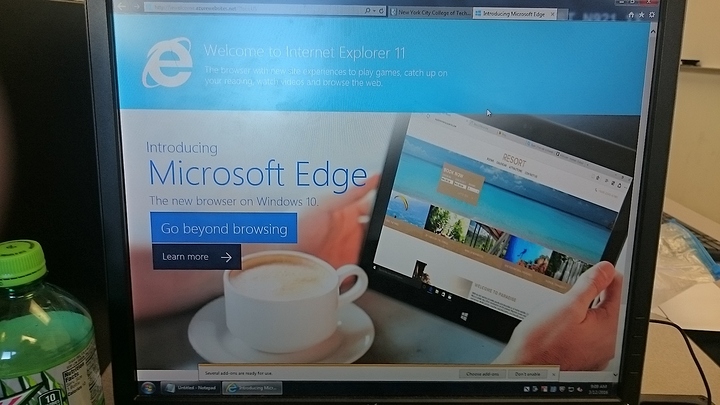 Was this on fist time use of ie or does that extra ad tab just randomly pop up from time to time during regular use?

this was actually in school as soon as I opened up I.E it opened up the homepage and then a secondary tab all on its own and this was that second tab.

Basically everytime you open up I.E that Windows 10 advertisement will show up.

Time for Microsoft to lose some marketshare until they get rid of those shenanigans...

But I fear that people have given up on this kind of stuff from MS :/