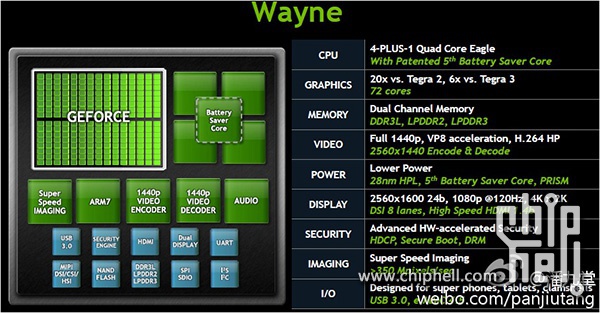 New news has been leaked about tegra 4.

According to the source the new cpu will support 4k, 1080p at 120Hz(maybe 3d! wtf? in a tablet?), dual chanal ddr3, and usb 3.0. Tegra 4 keeps the 4-PLUS-1 architecture of Tegra 3, so much for the rumors of a 6 core tablet cpu. The biggest surprise is that there won’t be 42-64 CUDA cores but 72 CUDA cores. This is much better than what the early reports stated. The only bad news is that it might not be released until February, but if this is what we are getting it is fine. IF the next Asus transformer tablet with a tegra 4 supports native Ubuntu it will put windows 8 rt to shame and most i3's notebooks (first gen). The only down fall of the tablets is the use of eMMC flash instead of ssd's.

That would revoutionise the way we use our phones and tablets.

cant wait to run like 3d mark on my phone XD