All photos self-shot are licensed under a Creative Commons CC-BY-SA 3.0 License

The Avermedia ExtremeCap UVC was a product I was interested in because it was a UVC USB 3.0 device that claimed to support Windows 7… I can say, it does… to a point… 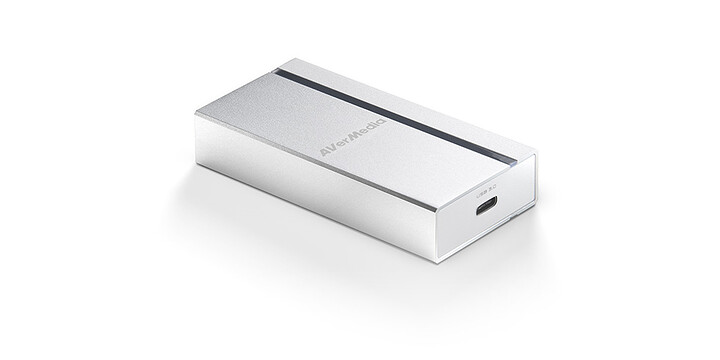 First, the Windows 7 drivers are not digitally signed, so installation extracts the driver, but doesn’t install it.

You have to use device manager to manually install over the UVC driver dated 2006 from where the installer extracted the driver in Program Files. Then, and only then, will USB 3.0 uncompressed transfer work on Windows 7…

BUT… It only supports uncompressed video up to 720p… Any resolution above 720p uncompressed hard locks your system.

Enter the 2nd major feature of this device: MJPEG fallback support. You can plug this into a USB 2.0 port and get 1080p60 over USB 2.0, albeit heavily compressed, but still quite low latency. Plugging into a USB 2.0 port on Windows 7 allows you to access 1080p60 capture.

Now to the teardown. In it’s stock configuration, there are no screws anywhere in sight. This is what the ends look like assembled: 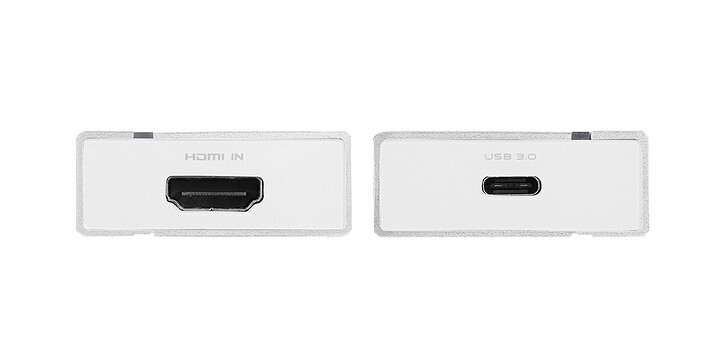 The white part is actually adhered on as a plastic sticker. To remove them, use heat to soften the adhesive, then use a prying tool to separate the sticker to reveal more underneath the sticker, including a pair of screws on the USB-C port side: 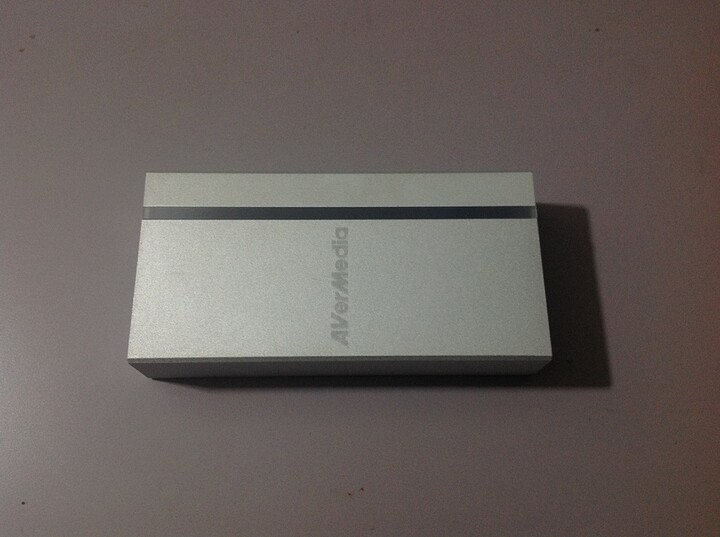 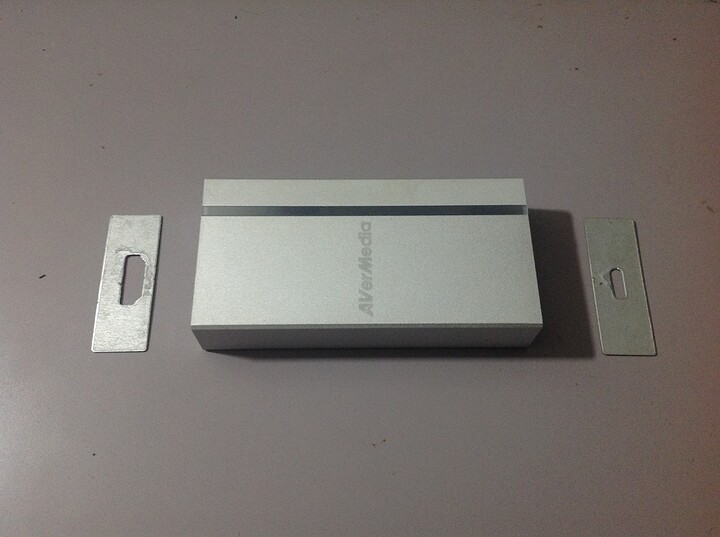 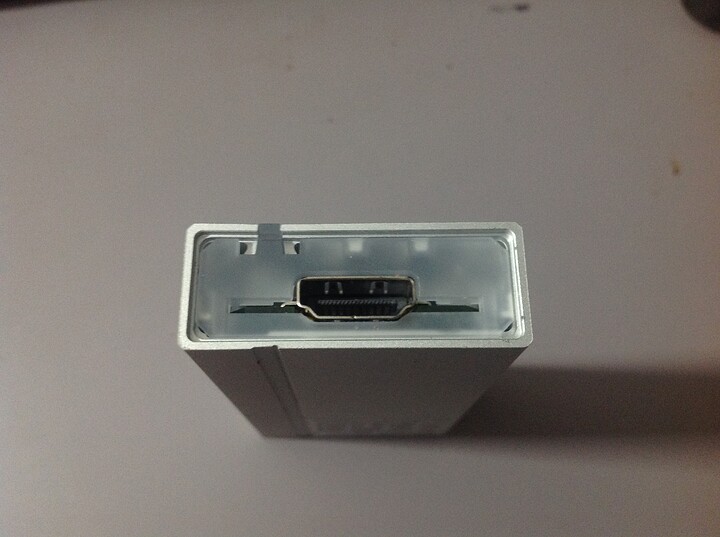 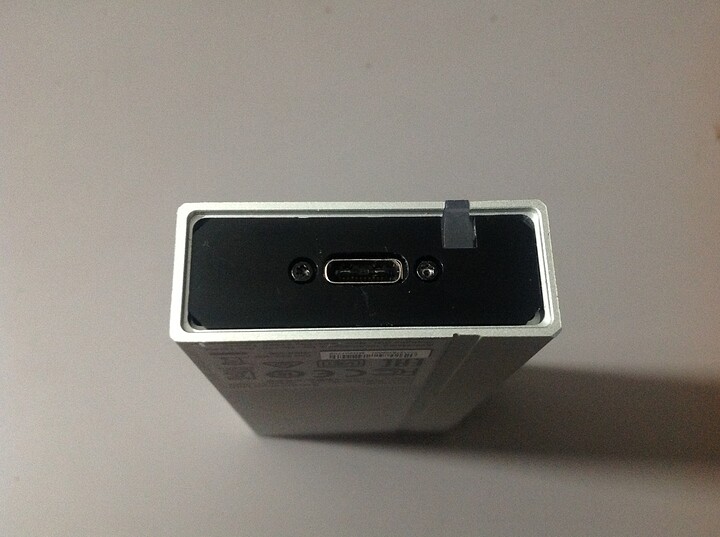 The screws use a Torx T5 screw head, so it requires a toolset with fine Torx bits: 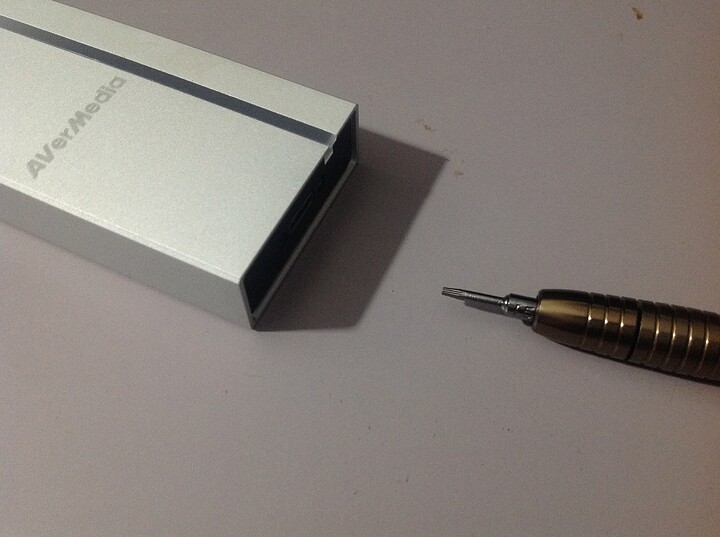 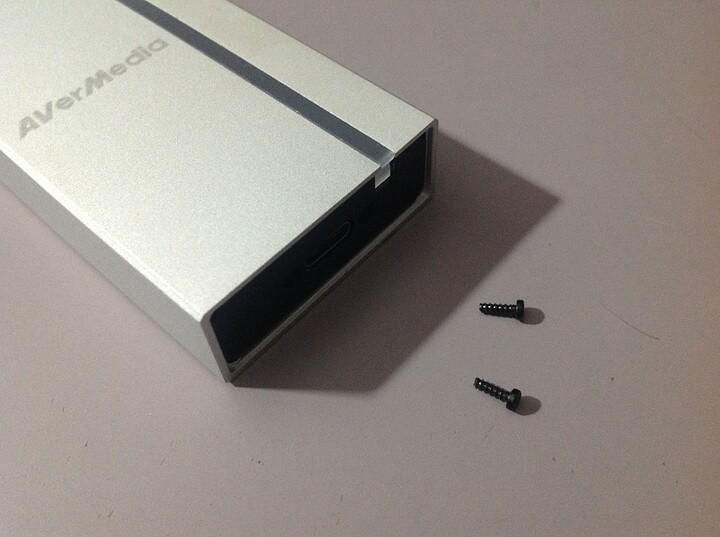 The black plate can now be pulled off, as only the force of the screws were holding the plate in place. 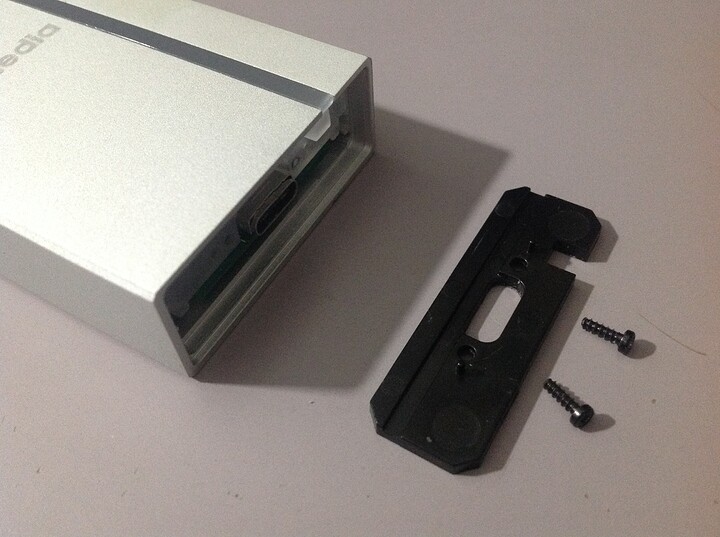 You can now push the USB-C port to slide out the entire plastic light diffuser and PCB assembly: 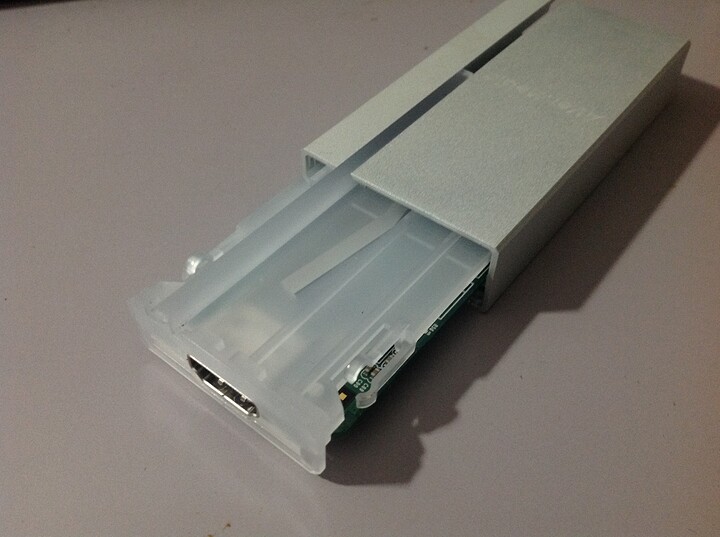 Now that the PCB and light diffuser are out of the case, we have our first look at the bypass caps on the underside of the PCB. We also spot a Winbond BIOS chip on the back. 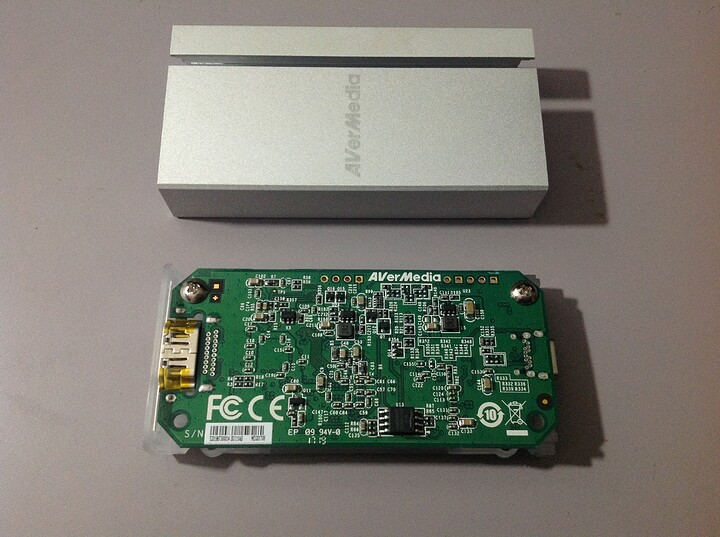 The Winbond Chip is a 25Q64FVSIG. A Public datasheet is available for this chip. https://www.winbond.com/resource-files/w25q64fw_revd_032513.pdf

We can now use a Phillips head to remove the 2 remaining screws attaching the light diffuser to the PCB. 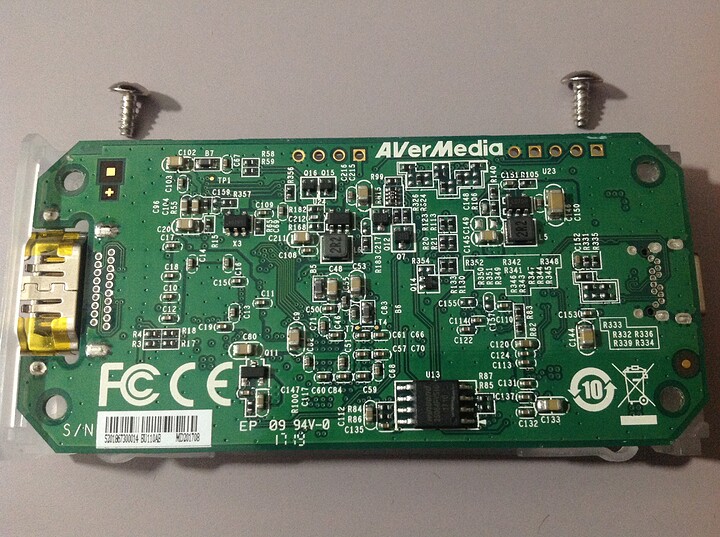 Flip the PCB around to reveal the main chips: 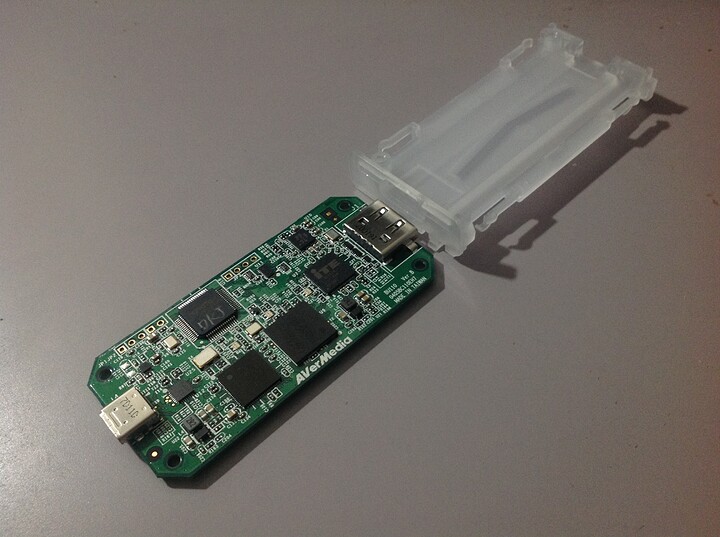 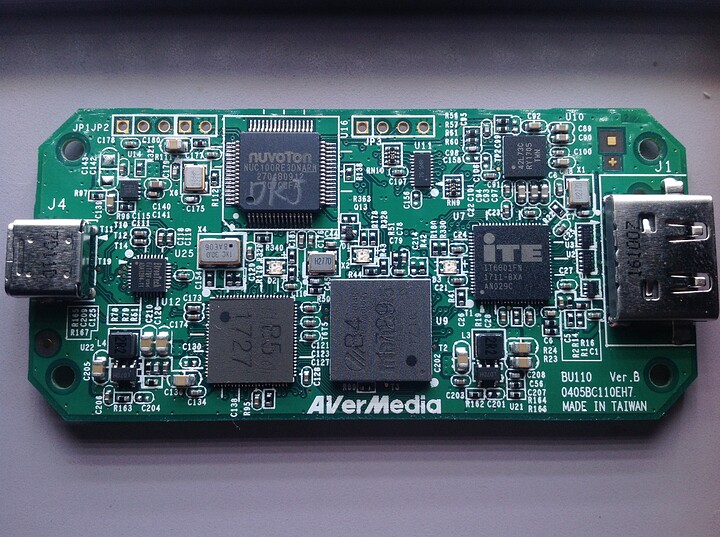 Just to ensure no one worries if the device is broken, the device still works when disassembled, revealing the blue LEDs on the PCB. Also, this disproves the @eposvox claim that there’s active heatsinking to the metal casing. There’s that plastic light diffuser inbetween the hottest chips and the metal casing. 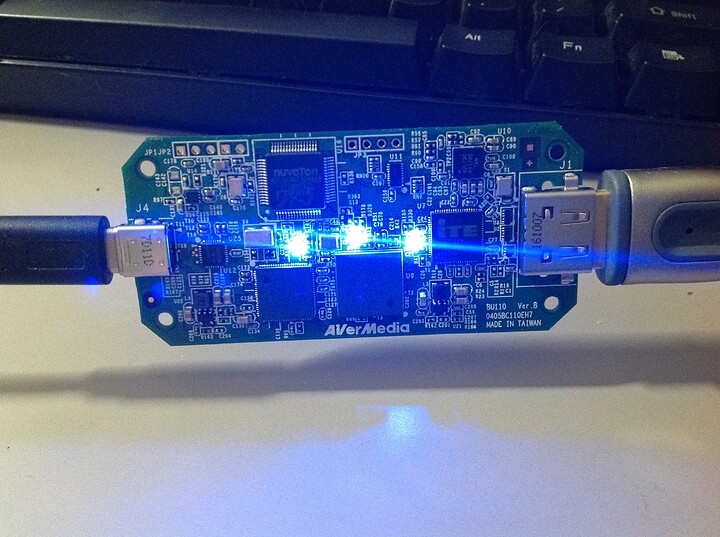 The device has been fully disassembled. With the hardest part honestly getting the stickers off with heat to soften the adhesive. After that, disassembly was extremely straight forward. 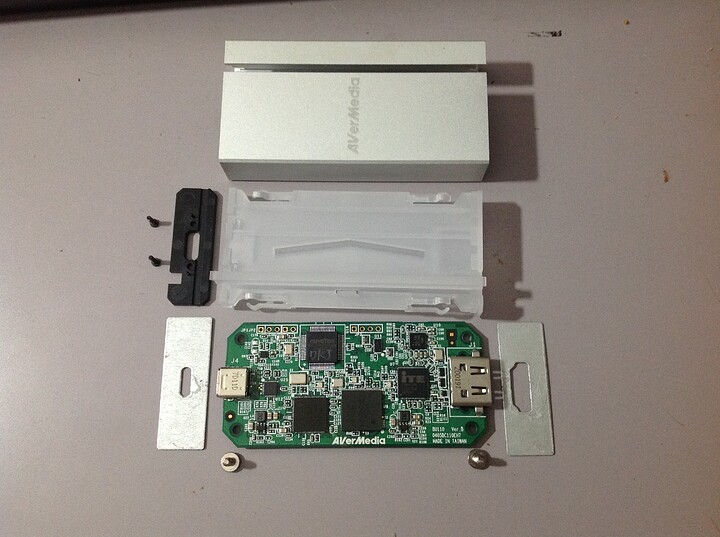 This shares a lot of components with the Live Gamer series of devices, but it could be down to how the UVC implementation is used between them and firmware differences that makes this one “plug and play.”

Really surprised with so many Etron components, which normally have incompatibility issues with certain things like Oculus Rifts or even the Epiphan AVio series of devices. (but the AVio use a Xilinx FPGA, and this uses a all in one Korean scaler chip)

Remember, this device pulls 600mA so you will need a Apricorn USB3-Y cable to use it on a device that cannot pull 600mA per port: https://www.apricorn.com/usb3-y-cable 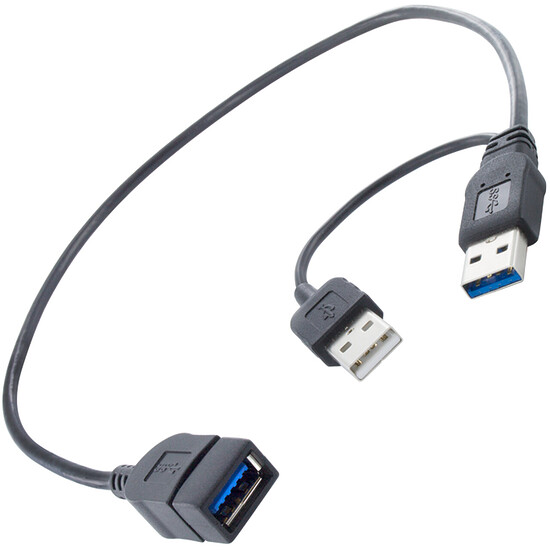 Or use an iFi iDefender to power it using a separate 5V 1A supply: 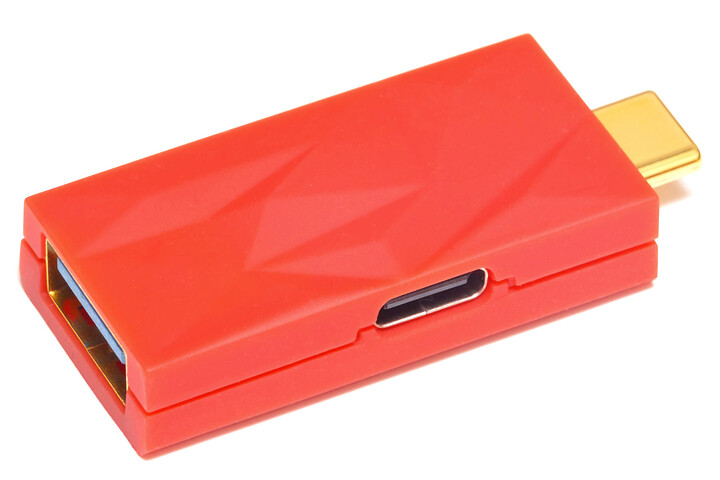 The new Defender of the earth. Multiple plugs and ports produce separate earth points, creating an unwanted chain of buzz and distortion. The iDefender+ plugs into your USB port, can inject super clean 5-volt power and creates a single earth point...

Due to the use of screws for most of the assembly, reassembly is possible up till being unable to re-adhere the stickers for the port covers.

Aside from the adhesive, relatively easy to get into and a solid build quality.