A couple weeks ago my XFX R9 390 graphics card died after giving some puzzling symptoms. I thought I’d share my observations for other troubleshooters out there across the internet.

I bought this graphics card new in July of 2015. It had a light overclock and was happily running Davinci Resolve and some light gaming… then one day the graphics card started Black Screen Crashing when it was under load video editing. It seemed like it was overheating, but manually putting the gpu fans on full blast didn’t make a difference. According the Afterburner the gpu temps never got high while this was happening.

False Hope
This graphics card was working great up till then and I was motivated to save it if I could. Thinking that my problems were heat related, I stripped down my gpu for a full cleaning job and even replacing the thermal paste and heat pads.

The card ran a little cooler, but none of that made a difference with my dual monitor crashing problem.

From there I spent a lot of time testing older Radeon drivers and wondering if it was related to a bad Windows Update. Then I swapped the 390 with an older radeon gpu. The old gpu could run dual monitors in Windows 10 no problem.

Three days after my original Dual Monitor problem, I started getting black screen crashes on a single monitor under load. After three instances in a row I formally pronounced my 390 dead and got a replacement. 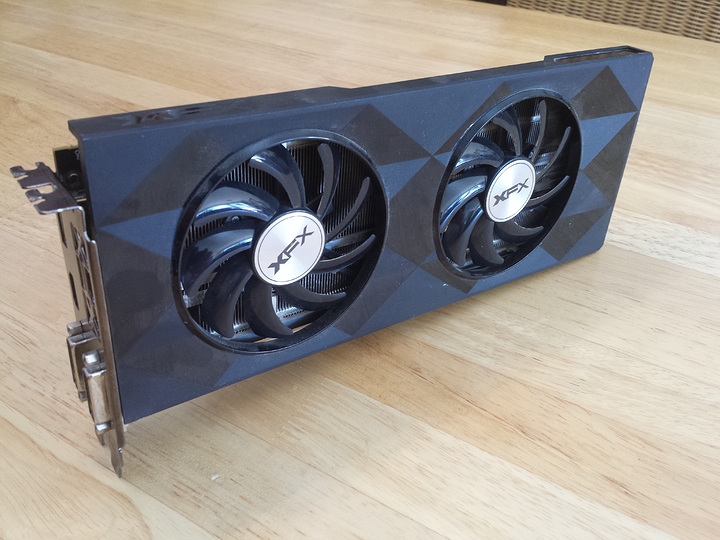 I had noticed the same symptons (minus the crashing) on my r9 290, first on linux only (at the desktop) than after pcie pass-through to windows last year I had no issue since recently I played GTAV and Niddhog oddly not in FarCry 5.
I hope the card survives til Navi/cheaper Nvidea comes out.
I refuses to pay for a new card that is much more expensive then 300€ (got my for 265€ in 2014) and to this day a upgrade in this price point doesn’t even provide a significant upgrade (>30% consistent)

Sure, I ended by buying a MSI RX 580 (8gb armor mk2 ver.) as a emergency replacement for $250. It’s not much of an upgrade, but it handles everything I do in Davinci Resolve without a sweat.

I was surprised how fast they have the clock speed on these polaris cards… People are getting 1400mhz no problem.

Anyway, I hope your card survives till something better comes along! Mine didn’t quite make it

I was surprised how fast they have the clock speed on these polaris cards… People are getting 1400mhz no problem.

Sapphire has cards that ship with 1411MHz core clock.
Polaris is not bad for midrange cards.

My dead 390 could only do 1120mhz stable. The new cards have almost a 50% performance boost with overclocking. That’s kinda impressive for re-fresh cards.