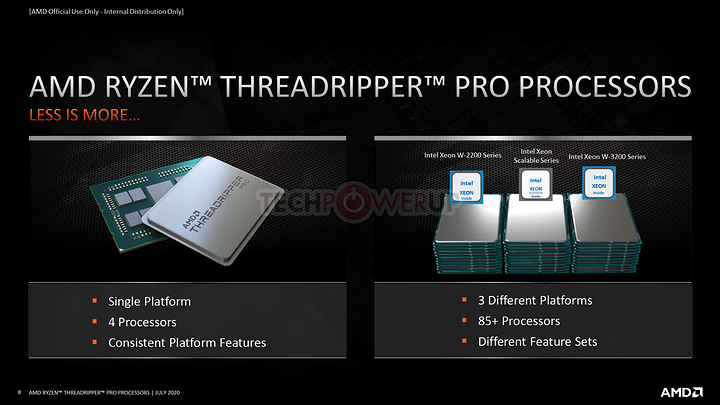 Yeah, but people waiting for that 12 and 16 core are still stuck with Threadripper 2000 in the retail space. They got double screwed, first with no 12 and 16 core parts with 64 lanes for Zen2, then getting it, but it being incompatible with their socket and only available through OEMs.

To add insult to injury, X399 boards are declared by Canadian brick and mortar retailers to be discontinued.

The other option - for 12 or 16 cores - is to go EPYC, and just sacrifice the clock speeds…

Picked up my S8030 motherboard from avadirect for ~$420 after shipping.

I take back what I said about Threadripper non-pro being obsoleted. What we might see is when the Zen3 Threadrippers appear, the Zen2 Threadrippers will remain but heavily discounted, but still with no 12 and 16 core options.

Honestly, if this is how it’s being sold, they should remove the “X” from the Threadripper PRO names. X means Enthusiast.

Hard to believe the enthusiast / bespoke market is so large and profitable that AMD can neglect the enterprise market (or the biz market really). I tried to buy business class ryzen desktops and it was so difficult I gave up.

Can’t get a 3500 or 3700 in an Optiplex or Pro / Elitedesk, just Intel. Maybe Lenovo but their potential connections to “the party” worry me for the business my enterprise is in.

Is that not entirely the OEMs decision? AMD has maintained a ‘PRO’ variant of their chips for the exact markets you’re expecting to find them. The OEM ultimately decides what deal they take and which chips they buy.

I can see this line as a very useful sink for ever more profitable and high margin Zen2 fast chips for when the Zen3 comes out. Retail users will hoover up the Zen3 AM4 fast units until production can ramp up enough to supply a fast Zen3 TR.

I am miffed about not getting this as a self-build. The Lenovo mobo looks lame, to be honest, but it may have all manner of non slot PCIe in terms of OCUlink etc.

It makes sense to me. AMD / Lenovo get to release qualified professional workstations that crush intel. They have a distinct advantage at the moment.

New Ryzen and TR chips will be coming out and will likely be faster soon enough and most build your own workstation users will not need the 128 lanes or 2TB memory freedom and settle for a faster system with better retail specs than this gen.

AMD could end each cycle with a pro chip once all the bugs are out for a premium to OEM’s. Business’s want proven tech. Enthusiasts want the new stuff.

Like the intel WS chips. OEM’s will most likely sell the Pro chips for a lot so builders can make still make systems. Gamers Nexus said Gigabyte and Asus said they will make boards with this socket.

See, where I see the most success is if System76 partners with AMD as a OEM to bring it to a Thelios system with coreboot. Then coreboot can be user replaced with a less restrictive version of the same thing for more control over the chips.

They can buy the OEM only Gigabyte motherboards and just slap coreboot onto it.

Is that not entirely the OEMs decision?

I think it’s more complicated. Maybe AMD doesn’t want to give as generous of margin discounts to OEMs as Intel does, or wants payment up front for inventory versus payment on end-user sale. Could be Intel’s non-compete agreements with big OEMs limit how much business in certain segments they can do with AMD.

AMD seems to be crushing it in the server segment, and there are “business / enterprise” class AMD laptops out there, but desktop and workstations seem something AMD can’t or won’t break into.

One YouTuber indicates the “starting” price on a p620 from Lenovo is going to be $4500 USD, which is insanity. Pricing like that isn’t going to win many sales.

Which kinda means they’re gonna be screwed out of this platform and be forced to TRX40.

There is a reason System76 doesn’t do EPYC systems though, and it’s the same reason why they can’t get this new platform. They don’t have special bulk order channels for parts designated for OEMs on the Desktop side, only the laptop side with Clevo machines.

There is a reason System76 doesn’t do EPYC systems though,

Sounds like they dont have faith in the demand of this product to risk it big, also not a ton of ATX sized boards out there.

Kinda leaves people like Torvalds SOL unless they build their own EPYC, or buy a workstation with Threadripper PRO in it.

Or have @wendell build an EPYC system for him.

Not really a ton of those people, hence why there isnt a lot of companies doing that product.

There’s always @wendell for those people.