So, I had a bit of trouble with my X99 system.
At the same time I had a lot of fun with my first dual 2670 build.
And that is how the idea came up to sidestep and trade in single core for multicore performance.
I am switching from an E5 1650 v3, ASRock X99 WS and 64GB Kingston registered ECC DDR4 2133.

If everything goes to plan, these are the specs of my updated system:

I already have the CPUs, the board, the coolers and the PCIe USB 3.1 card here. The memory is on it's way from Korea. 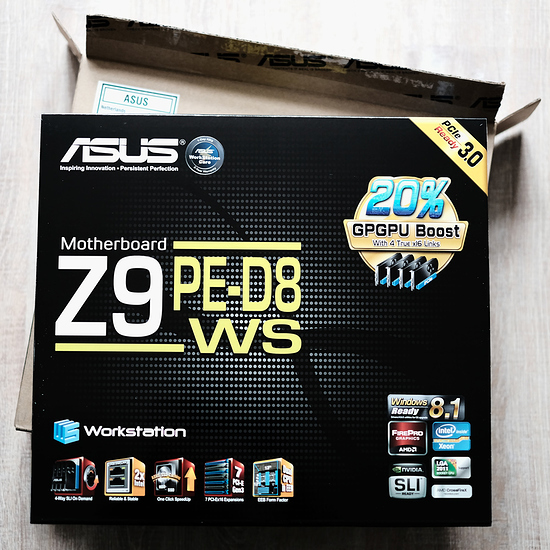 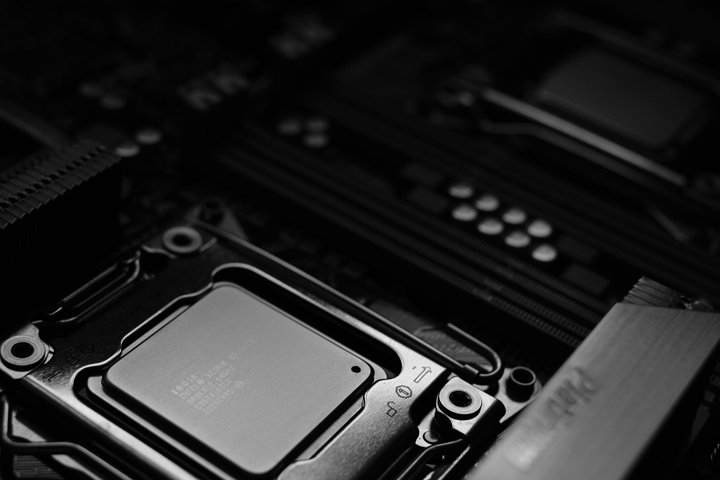 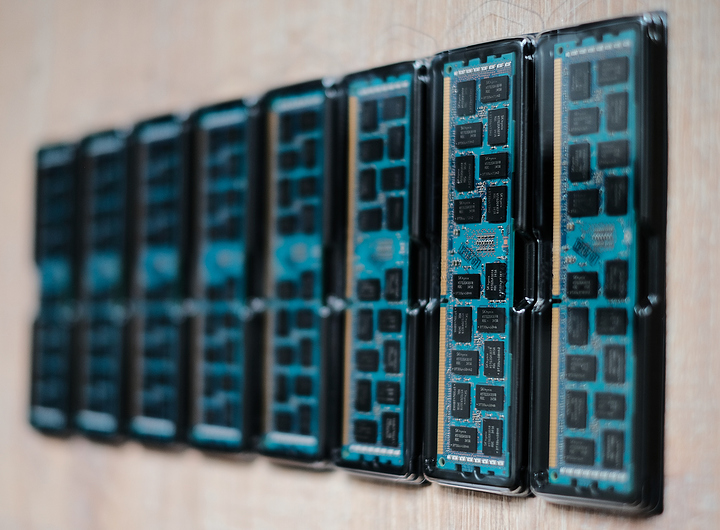 The new parts fit together perfectly. So far so good. 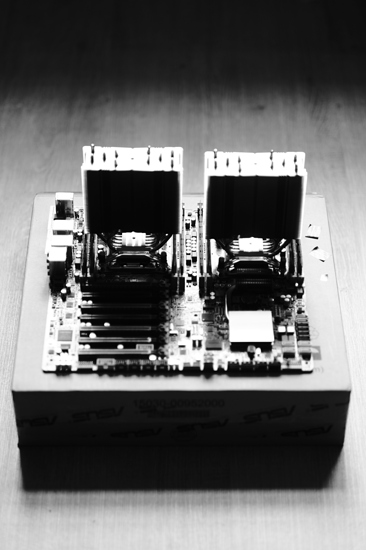 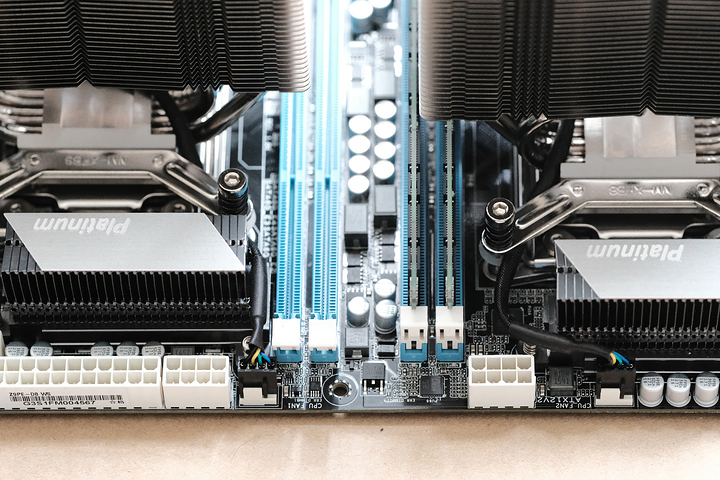 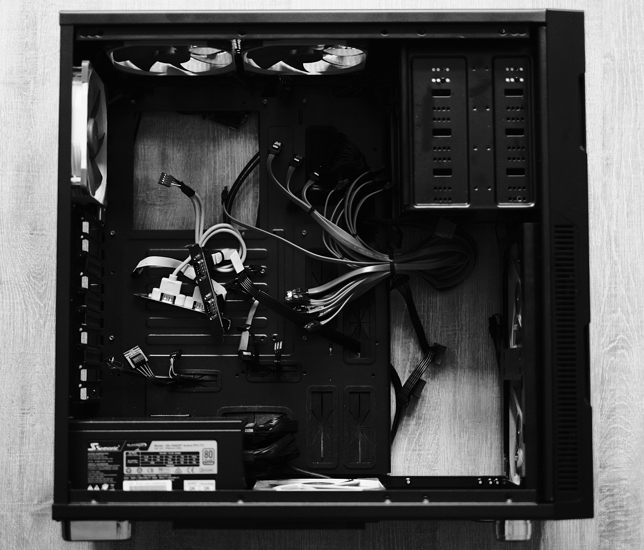 I totally forgot to take a shot of my system before I murdered it. Sorry.

Parts that will go back into the updated rig: 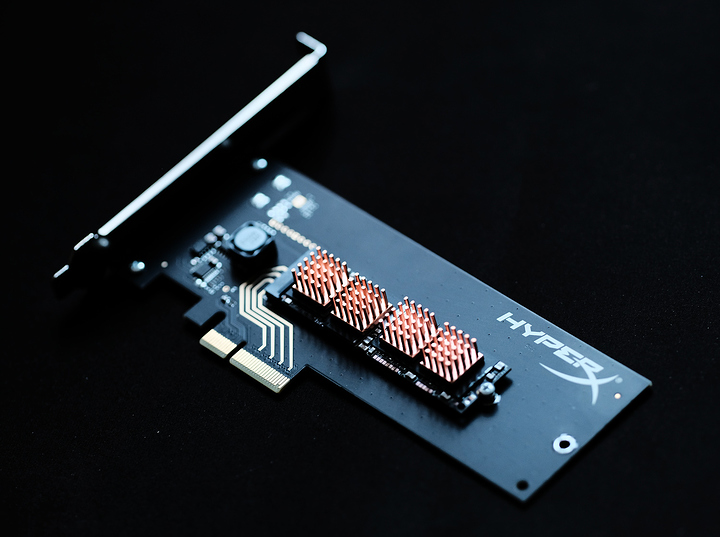 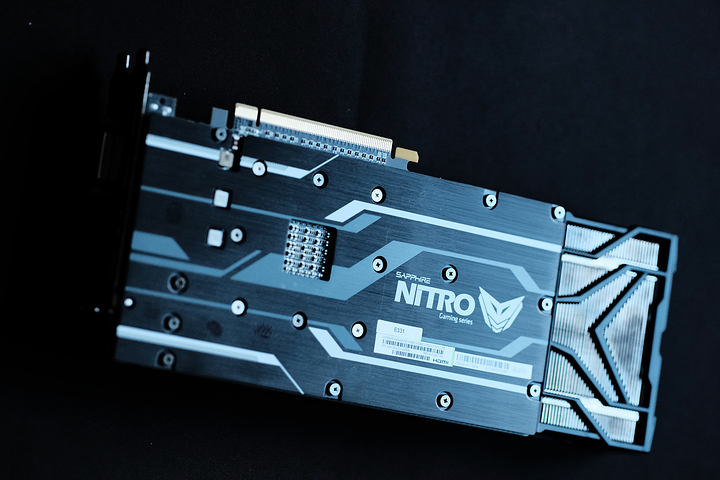 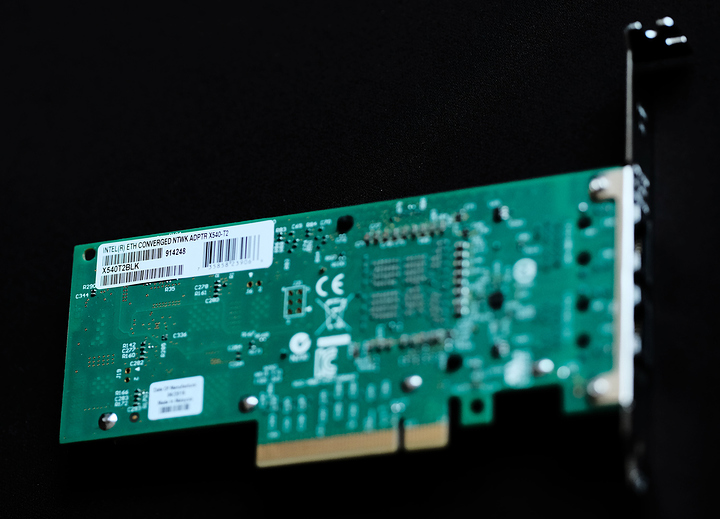 And here is a comparison between old and new.

Still sick. It's gonna be a step by step thing...

A very nice surprise: The case has all the necessary holes for mainboard standoffs. No tape, no zip ties, no MacGyver needed. 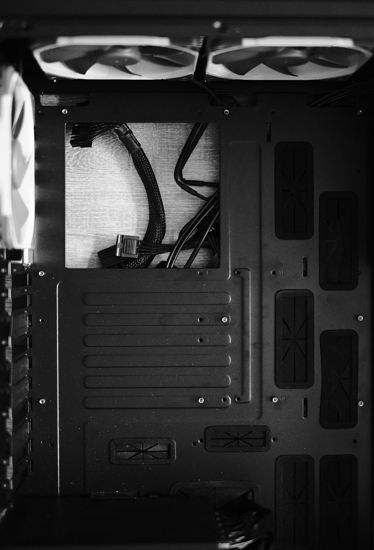 I connected all four power plugs to the mainboard (24 pin, two 8 pin and one molex, all at the very top), front USB2, front USB3, slot brackets for serial ports, USB2 and firewire, the fan of my PSU (mod) and the panel switches and LEDs. I am not using HD-audio so that cable will end up tucked away somewhere.
I also threw in most PCIe cards (USB3.1, M.2 SSD and 10GBit NIC) leaving only the GPU out for now.
I decided not to use the top slot for that so the CPUs are not completely cut off the fresh air from the front fans. 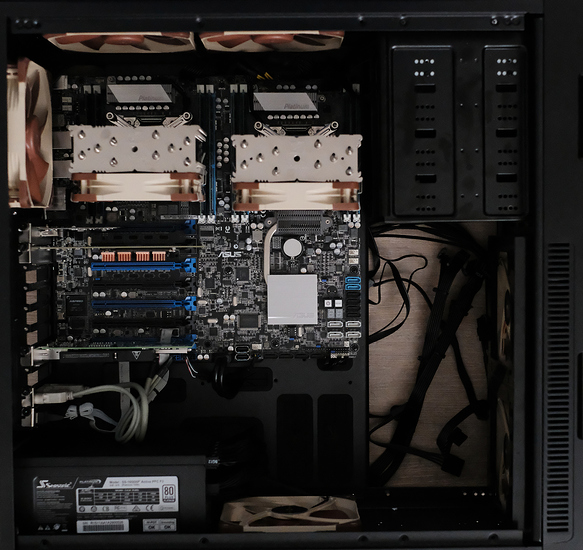 I had to rip out most of the drives from the 5.25" bays, only the bluray writer remained. I will have to use angled SATA connectors for my HDD bay because of this: 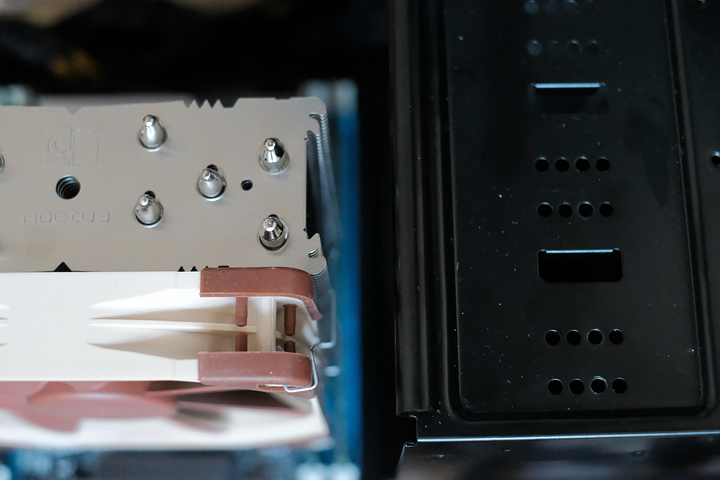 Yeah, it is tight. So that is up next.

Before I could even think about installing any SATA stuff I had to get rid of the fan on the back of my HDD bay.
Pretty easy since I already modded it and used a noctua fan. (I'm a whore, I know.) 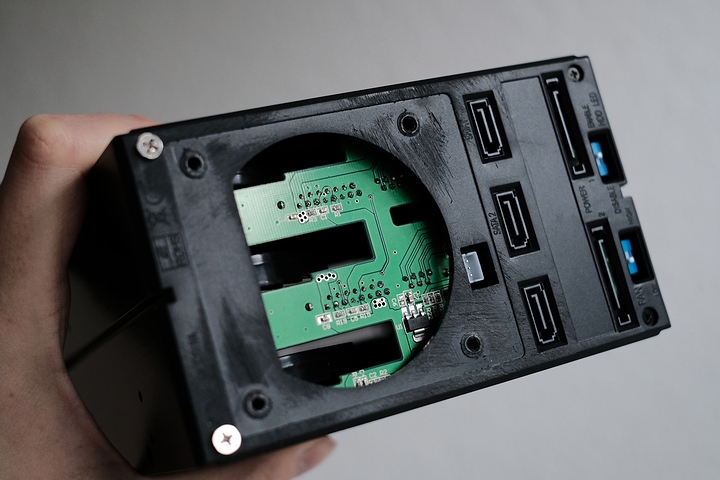 After that I went for a test boot. Installed the Fury and hooked the rig up to a monitor.
Aaaaaaaaaaaaaaaand nothing.

Onboard power switch, reset and an unknown LED light up when I switch on the PSU. Than's it. Pulled all the PCIe cards out, disconnected all breakout brackets and front panel stuff, tried multiple sticks of memory (also different kinds), reseated CPUs, then tried only one CPU with one stick of memory, then the other CPU......
Nothing. Not even a hint of movement on the fans. 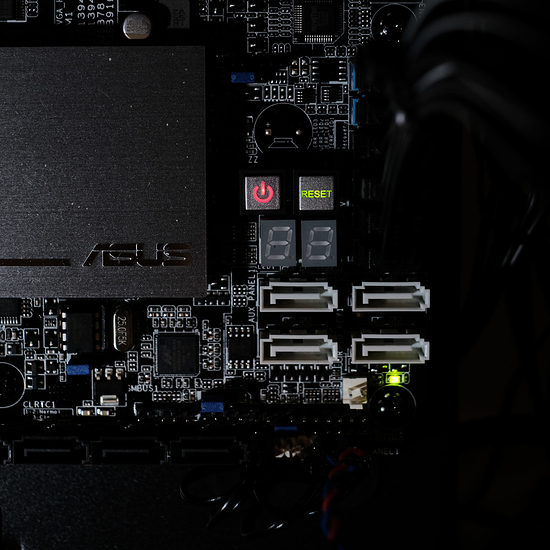 It is either both CPUs are dead or the motherboard. .... Or ...
I found a post in a forum about incompatible PSUs with this board. (Have to find out if there is a UEFI update for that)

I'm stuck. Probably have to buy a PSU to test and after that it is RMA time and I'm back to zero.
If anyone has additional ideas, fire away. Maybe I'm an idiot and it is something totally obvious.

Well, I wanted to be done with the system now..... Bummer.

Turns out that my second EPS cable (silverstone) has a different layout than the one that came with my seasonic.
I have a silverstone PSU and the cables between that and the seasonic are identical. So I assumed that those brands are compatible in general. Stupid me.

Despite that nothing bursted into flames and all components are fine. I just confirmed that both CPUs are recognized in the UEFI and all 64GB of memory are there as well. I have to force the board to run them with 1866MHz because the 2600 v1 only supports 1600MHz officially. So I will test the memory but I am optimistic that this will work fine.

SATA cabling all the things!

After dealing with the PCIe cards, breakout brackets, front panel stuff and so on (again), I got around to connecting all the drives to SATA and power. This is something that shouldn't take more than a few minutes under normal conditions. But given the tight space all the cabling had to go through, it was a bit of a challenge. 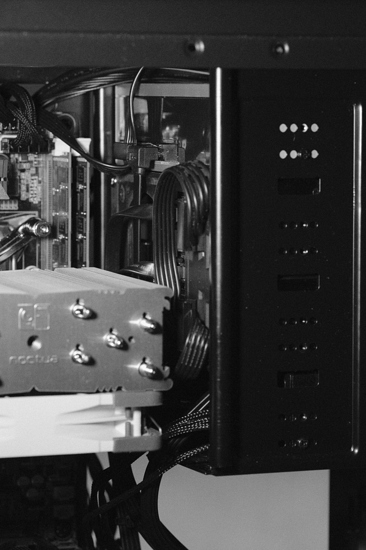 Now the only thing left to do is the annoying cable management behind the motherboard.
But because I'm lazy it will look terrible and therefor I won't show that to you. :P
The end is near.

I had a few more issues today, mainly fiddling with the UEFI and stuff and I have still not done anything with software but I will leave the build log at this. The hardware is put together, everything works so far, cables are good enough for me. But take a look for yourself.

Here is another look at how there is barely any space for cables between the drives and the CPU heatsink. 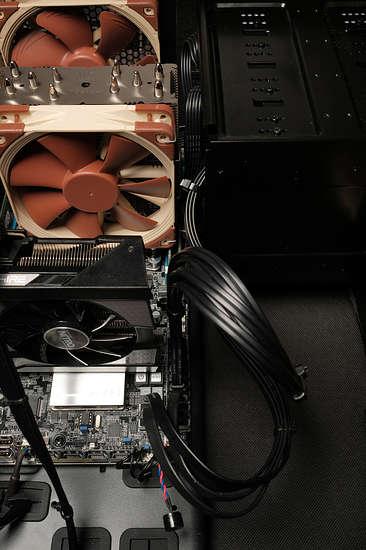 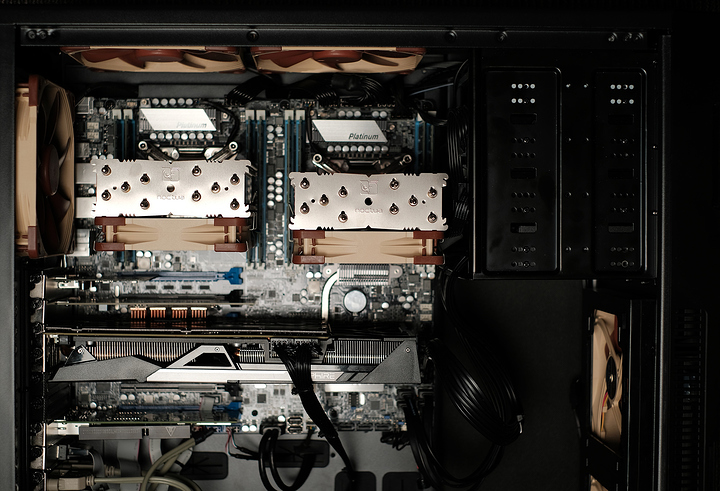 And the final overview on all the guts.

What do you think? Do you hate it? Did I do dumb? Is it ok?
Anyway, I hope this log didn't bore you to death and if you are from the future and wanna build something like this, there is an overview for all the Xeon E5 2670 builds in the forum.

p.s.: I just realized that I never showed front or back of the system. So before I hooked it up to all the cabling I took two quick shots. 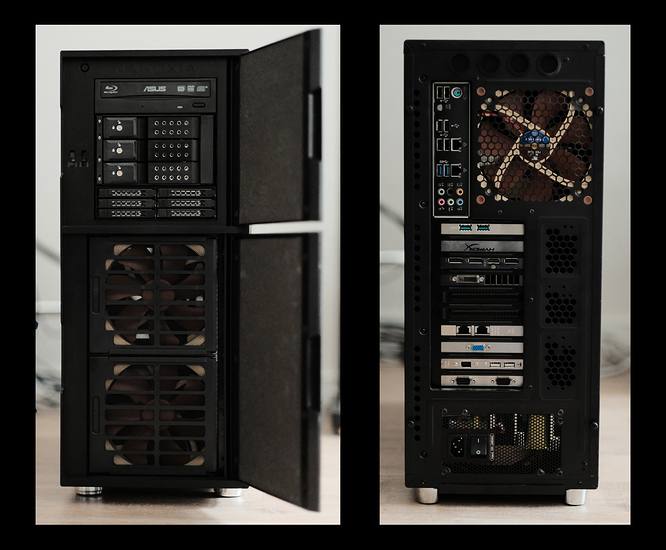 I've been considering almost the exact same build! Can you let me know how it performing and things you wish you did or did not do with it?? I was considering dual 970s in it

Well, for pure gaming a dual 2670 system might not be the best option. Also Adobe stuff does not scale well beyond six to eight cores. For everything else these chips are fine and in a multitasking world the more cores the better.

Personally I will be running linux on this machine, so a lot of AAA games as well as the adobe crap suite are nothing to worry about for me. What would be your use case for the system?

I typically do a lot of multitasking. I do game a bit, but not many AAA titles. I have been becoming more interested in many linux my main environment, and the few games I regularly play I want to try and make work on a linux distro. My main video editor is sony vegas and I am still looking to see how that scales with more cores.

Right now I use an R9 290 for my GPU but have been offered 2x GTX 970s and have been looking into that performance and if it would make up for the CPUs in most use cases. I know that drivers are always a hot topic on linux and running a 3440x1440 as my main display I am not sure what the performance would be like yet.

In the mean time I am trying to determine what the overall price would be for this kind of system and thus far have been struggling to choose a motherboard and dual cpu combination. Any input would be appreciated. Thank you for you knowledge also!

As far as I know Vegas doesn't scale very good over this amount of cores. But I am not 100% on that.
Multiple GPUs in video production.... also questionable.
And depending on what your software is using (OpenCL / CUDA) those two 970s might even be a step back.

Other than that if multitasking is your thing, you like to render shit and also play games while doing so, have virtual machines running and so on... Yeah, 2670s man! Best deal in ages.

What kind of performance can I expect compared to my current setup with an i5 3570k? I understand that upgrading this system in the future if I build it may not be great but would like it to last a while if I am going to spend the money. Also do you have a link to where you got the CPU and motherboard?

What kind of performance can I expect compared to my current setup with an i5 3570k?

Well, in raw compute performance I get 2000 points in Cinebench R15. That is probably around three times the performance of your chip. But as I said, that is for perfectly scaling software. And it doesn't use AVX or quicksync or other new instruction sets.

Understood. I am trying to determine which version of the 2670 I should go with, being the DDR3 vs DDR4 especially considering the pricing

That is a price range of 600,- to 900,- Euro for the core components of an amazing workstation.

If you are thinking about an E5 2670 v3 from ebay, those are pretty much all engineering samples.
Those can have problems, no boost clock at all, lower clock speed, disabled cores, incompatibilities .....
So do NOT buy ES chips. Stay away from those. They seem too good to be true for a reason.

That does seem like a fairly good value. I checked benchmarks for raw performance of the xeons vs my 3570k and they obviously win, but i havent found much in terms of gaming performance, mainly out of curiosity. I am also now wondering what to do in terms of graphics performance if I want to keep my current gaming pc as is just to make sure everything works as planned, but am still able to dabble in some linux gaming.

I'll let you know once I look thru what the final parts list may be in a few hours.

beautiful. Holy shit. I am so jealous of you right meow .-. Mainly because of that network card and pair of CPU's.

The NIC isn't even that crazy expensive anymore, it is like 150,- Euro when you get it from Hongkong.

That said, I agree that it's an awesome build. Have fun with it!

That said, I agree that it's an awesome build. Have fun with it!

Thank you. I will update the first post when I get the memory and can actually start building.

Where did you bought your Z9PE and would it be worth going for 1866 modules for nearly double the price of the 1600 modules?

I bought the board at mindfactory.

The cheapest new memory I have seen on ebay was 64GB reg. ECC 1333MHz Samsung for 180,-Euro.
(That memory is running in my first dual 2670 build, linked in the first post)
For my main rig I wanted the fastest possible memory and that kit cost me 260,- Euro.

Again, I can not tell you what is worth what. That is subjective.

how much was the board from mindfactory?

that would be samsung http://r.ebay.com/rrn3cq hope the link works :)

i have to pay about 25€ for shipping and payment fees ...

That is a barebones server board. The WS has a lot more features.
Also the form factor looks ... odd. I don't think it would be easy to put this thing into an E-ATX case.

i have to pay about 25€ for shipping and payment fees ...

Shipping and stuff was free on my memory but still, that is a good deal.