What's a decent power surge bar that could handle two high-end modern pc gaming rigs? I've done some research but I'd like some community input too.

This is the surge protector I decided to use to protect my rig https://www.amazon.co.uk/Masterplug-SRG62-MP-6-Gang-Protected-Extension/dp/B000GJCSV4/ref=sr_1_4?ie=UTF8&qid=1471201605&sr=8-4&keywords=surge+protector

APC or Tripplite are the brands I trust. I'm sure there are other good brands but these two are routinely used in Enterprise setups, so I can vouch for their reliability and longevity.

If I read correctly - DO NOT PUT TWO PC's ON ONE POWER STRIP.

One strip per PC and preferably plug them into two different wall outlets on separate circuit breakers of your house.
Don't waste your time with cheap power strips. They are good for one Zap and then they are an extension cord and there is no way to tell if it is still protecting your equipment.

My I.T. guy at work told me to get a battery backup Uninterruptible Power Supply (UPS). They are expensive (Can be over $100 for one big enough to handle a typical PC) but they offer super protection, you can read power draw, electrical quality and will save and shut down in the event of power failure. It also has surge protection for your cable TV, Ethernet and phone lines. I even used mine to power a light bulb in my house when the power went out. 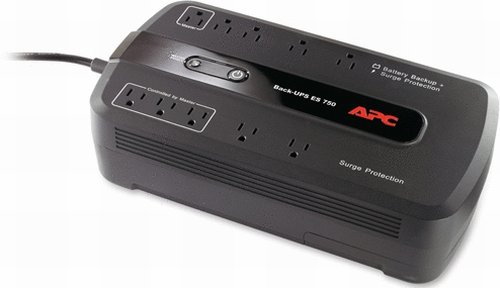 This is what I have, but I should have got a bigger one. $80

Those little UPS systems are useless for anything except being dedicated for your cable modem and router. They have such little uptime capacity as to be a joke. Even at half capacity, which for these is like 150 watts, you are looking at like 2-5 minutes of uptime. They could probably keep your cable modem and router up for several hours. You could put your monitor on this one, and have a separate, larger one, for the computer, and that might be OK

I've become a bit of a UPS snob in my days of doing IT work, and being an uptime whore.
https://www.reddit.com/r/uptimeporn/

I won't buy anything less than 1500VA. The cheap 1500VA UPSs only put out about 865 watts. The higher end models put out around 1300 watts. But there is a big price difference.

Try to get a used enterprise grade UPS cheap. You can often get ones with dead batteries for a couple hundered bucks. Then do what Jerry did, which is replace the batteries. You don't have to buy as expensive of batteries as he did.
Here's his video showing how he replaced the batteries.

Also, UPS systems over 1500VA will have a different plug than standard (standard is NEMA 5-15P). The 2200 models will require a 20amp plugs (NEMA 5-20P). Also the enterprise grade UPSs are usually true sine wave, which isn't absulutely necessary most of the time, but a good feature, and ensures maximum compatibility with some AC motors and other stuff.

UPS is not designed for extended running time, even if you go all out and buy the highest capacity one.

Yeah this is true. Also, don't run your laser printer on a UPS.

That being said, battery capacity is nice. It's nice to have the option to delay a shutdown to a more opportune moment.

Also, configuration is key. Using sleep mode on a desktop seems strange, but your computer will use very little power in sleep mode, and can restore in an instant. I'm torn on hibernation or hybrid sleep, because you have to have a hibernation file on your drive... and in windows, you can't move that to another drive. Sucks.

I've become a bit of a UPS snob in my days of doing IT work, and being an uptime whore.

That's fine if you need it or want it, but the OP's question was about surge protection, not uptime. I am much more interested in genuine surge protection than ultimate run time. Yes I know enterprise UPS exist (I used to work for SquareD designing such systems) but for a home user, something like that is a bit much. I can't afford one, nor do I want something that big in my room.

Everything you say is accurate and true, I just wish I could afford it.
What makes you think a guy that is asking to plug 2 PC's into one power strip is going to spend hundreds on an enterprise UPS.
Get real. JK LOL :)

OK. You got me. Not everyone needs or wants a UPS (but they are fools. FOOLS I TELL YOU!)

A pretty basic 'name brand' one should work fine, like this Tripp Lite unit. There's some BS $25,000 warranty on it that they will never pay in a million years, so don't get your hopes up. 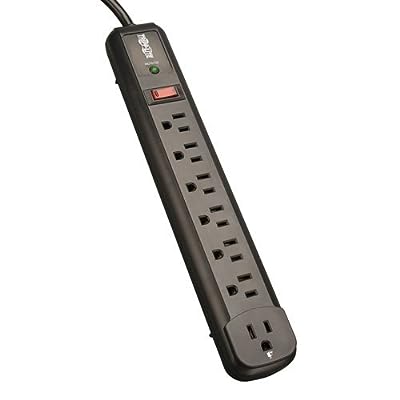 TLP74RB Protect It! Surge Protector (Black) It could happen in the blink of an eye: a sudden power surge that damages or destroys your valuable electronic components. And even if a catastrophic surge ...

Do any of these companies selling surge protection really cover you with this insurances sold with it? Anyone have an experience where they had it fail and take out your pc parts or whatever and actually got money that covered what they lost? I would love a list of companies that are legit with the insurance side of things.

It's not insurance... it's a guarantee.

And it's legit if you can prove in court that their product failed in the way they guarantee, and caused up to $25,000 (or however much they guarantee it for).

It's not unlike Moss Magnauson, you have to prove that your modification didn't cause the damage.

The onus is on you to prove it, so get out your checkbook and write an attorney a retainer, pay their rate, fees, etc.

i use this one here for my gaming pc, 2 monitors and a 3d printer no problems.