I have an OCZ Vertex 450 128GB that has a Windows 8.1 Pro installed on it. It was working a few hours ago, pretty sure I had it shut down properly and I did not install any updates for weeks already.

When I turn my PC back on just now, I couldn't even boot into Windows, the UEFI is not even detected in the BIOS! I tried using my Windows 8.1 installation drive to refresh, but it says my drive is locked, unlock it and try again. After Googling, I found out that by doing Chkdsk it might work, unfortunately for me, it appears that my whole Windows partition is GONE! The EFI, the main all missing.

I went into the installation disk again and attempted to install Windows 8.1 Pro, I couldn't install it as it display this error code 0x80300002. I went to Ubuntu Gnome and ran a SMART test from Disk utility with it passing. I just couldn't understand how the drive can just simply locked itself out.

Anyone has any idea on how to fix this? I even heard some absurd speculation that this is some sort of security mechanism deployed by SSDs that automatically encrypt and wipe all data when it is nearing its failure.

There's a decent chance the disk is dead, OCZ SSDs used to have a very high failure rate. If nothing else works you could try flashing the firmware of the SSD, I managed to get one of my OCZ SSDs to work again by doing that, but there's a good chance you will lose any data which is on there, or make it worse.

Oddly, I can detect the drive from my utility and it passes SMART tests easily. I do not have any data on it as it is a boot drive. I just can't seem to install Windows on it.

For some reason, the OCZ SSD Guru would not allow me to update the firmware, I'm working from a Linux environment. Ubuntu Gnome to be exact.

Okay, day 2, I have attempted to install Linux on the OCZ Vertex 450 but it seems that my drive is preventing the installation from running too as it shows this error. dev/sdb is the device code/directory for the OCZ drive. 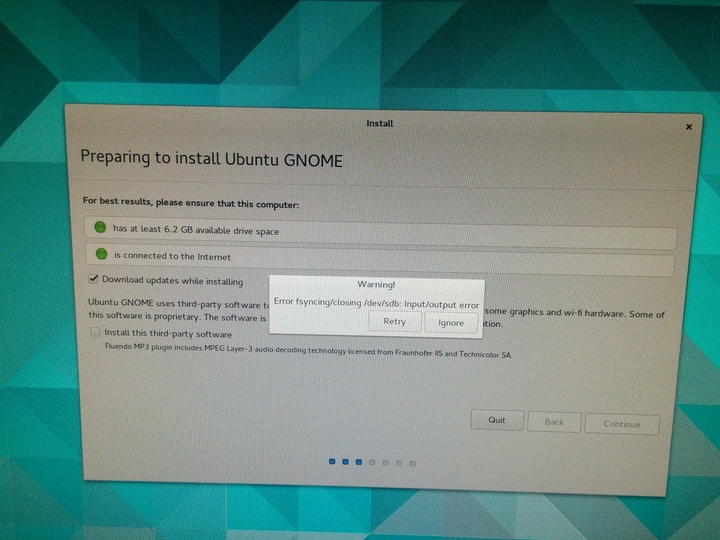 I have attempted to create a system image disk to restore the Linux partition onto the OCZ drive. However that part fails as I cannot create the image for some reason. The drive also do not allow me to perform any form of formatting too. 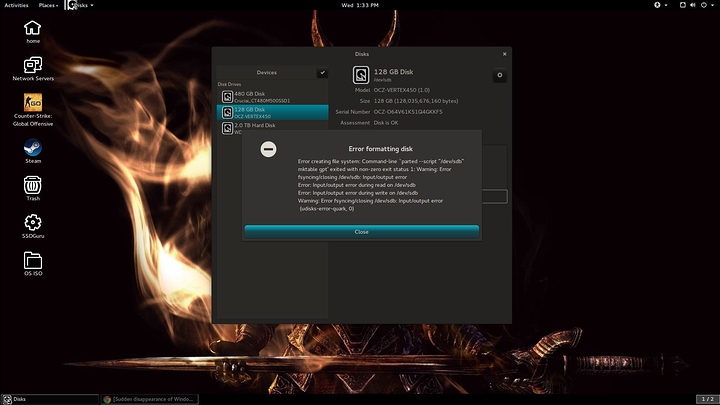 So is it conclusive to say that my OCZ Vertex 450 is officially dead? I can't even update the firmware.

I think it's pretty safe to call it dead.

I would try formatting it in a bootable environment, but yeah it's probably dead.

I think it's pretty safe to call it dead.

I would try formatting it in a bootable environment, but yeah it's probably dead.

I just pulled out the drive, and the installation disk went passed the stage that it was stuck at. Oh well, time to hunt for a new SSD. I got this and a Vector 150 480GB way below the market price, it was great while it lasted, hopefully I won't have to shop for a 480-500GB SSD anytime soon.

Thanks guys, I would appreciate you guys can help me with a bit of Linux problem I'm about to post,